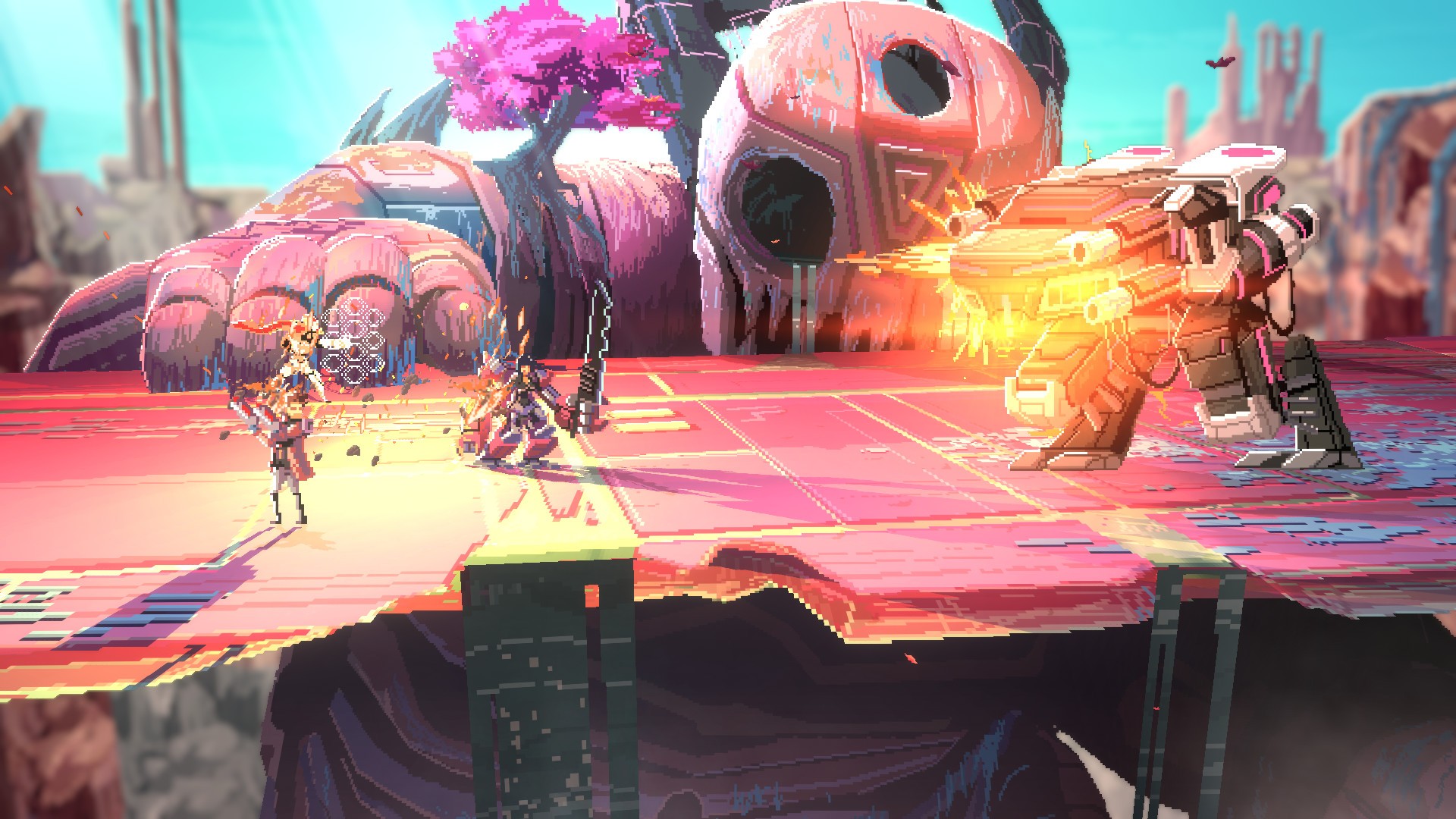 Star Renegades is a “dimension spanning rogue-lite strategy RPG” with simultaneous turn-based combat from Massive Damage, Inc., the same studio that made Halcyon 6, a game which I definitely recommend you check out if you haven’t played and if you’re into turn-based combat games. Star Renegades puts you in charge of a squad of up to 6 renegades tasked with stopping an invasion force from an alternate reality. The Imperium, as it’s known, seeks to conquer the entire galaxy in as many alternate realities and dimensions as it can, and you’re the galaxy’s last hope of salvation.

Let’s face it, you’re going to fail, over and over, until you eventually manage to beat the Imperium’s overwhelming forces. To that end, whenever you fail, you send your trusty J5T-1N drone to the next alternate reality as a last-ditch effort to warn that reality’s version of yourself about the incoming doom. Consequently, you’ll then take command of a new renegade force on the new dimension that’s about to be hit by the Imperium. Despite dealing with alternate realities, Star Renegades as a whole makes sense, it doesn’t complicate things and the gameplay loop fits perfectly within the game’s setting.

To fend off the Imperium’s threat, you must prevent its forces from capturing these powerful cores located in three different planets, which the Imperium needs to open a big enough portal to send their entire fleet through to overwhelm your galaxy, and then you must assault the Imperium’s battleship. Each planet represents both a different biome and mission and so they must be completed in order, meaning that you’ll only reach the second planet if you make it through the first one. In each mission, your goal is to reach the core’s location before the enemy’s Behemoth arrives. This Behemoth is essentially the final boss of each planet and you have 3 days until it gets there to both reach the objective point and to explore the planet.

This time limit isn’t really a straight countdown timer. Instead, the game measures it by the passing of days, which in this case ties to how many times you can rest for the night before meeting your doom. It’s essentially a turn limit. Basically, each planet is divided into several areas that must be unlocked by your drone before you can traverse them, but your drone can only unlock 3 of them per day, hence the time limit. I had no trouble making my way to the objective before the time runs out because that’s not how the game is designed. The turn limit just serves to make you plan your route and prioritise which areas you want to access, because from the map view you can see what kind of enemies these areas have, and if they contain resources, equipment crates, and healing kits or other boosters. 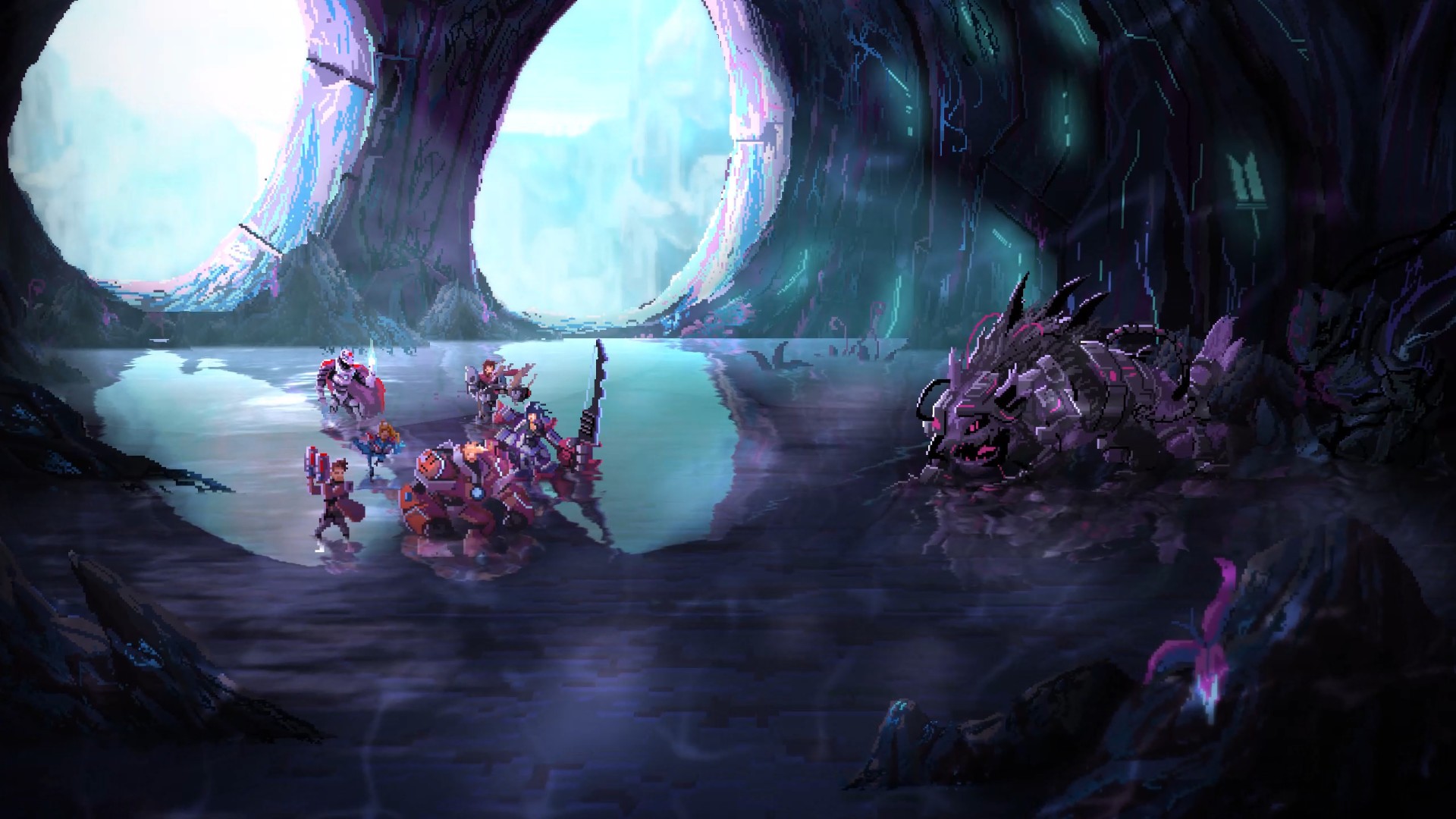 As you explore each planet, you’ll be able to interact with landmarks to learn more about each world, but you’ll also immediately engage in combat once you move into an area with an enemy. Combat plays out in rounds of 60 seconds where you can see incoming enemy actions in a timeline at the top of the screen which allows you to properly execute different attacks, abilities and defences in the best way possible to maximise your damage output and minimise incoming damage. Now, the reason as to why this system makes combat interesting, is that if you manage to hit an enemy before they act on any given turn, you’re able to delay their attack, and if enough pressure is applied, you’re even able to push the enemy’s action entirely to the next round.

Obviously, the combat has much more to it than just that though. Each unit has a different amount of shields, armour and health, as well as a range of class-specific abilities and attacks. There are a total of 13 unique renegade classes, with each having set roles to play. There’s the hard-hitting Valkyrie, the Aegis, which can regenerate its shields as well as transfer its shields to allies, the Archon which focuses on dealing area damage and regenerating the shields of its allies, there’s also the saboteur which specialises on delaying enemy actions and that’s just a few of them. I won’t spoil all of them because as you play the game you’ll keep unlocking new renegades.

Besides the timeline feature, and much like Into The Breach, you can see which units your enemies are going to attack, so you can plan accordingly. For instance, if you see that an enemy is going to attack a hero and you can no longer delay its attacks, you can just order that unit to defend in order to minimise incoming damage. At the end of the day, combat almost feels like you’re playing an intricate game of chess or trying to solve a puzzle, as you go through every possible scenario in your head to figure out in which one you come out on top.

There’s also a wide variety of enemy types, more so than renegade’s class types, with each of them also having their own set of skills. Some enemies can also be weak, resistant, or even immune against specific types of attacks, which might force you to adapt and break free from any attack strategy that you might grow accustomed to. Besides that, there are also plenty of status effects, such as burning and bleeding, which can slowly turn the tide of a battle. Things such as being able to deflect, guard or provide cover fire are also present in Star Renegades, and when you combine all these facets the combat really becomes extremely engrossing.

Although you start over every time you lose, there are quite a lot of things that carry over between playthroughs thanks to Star Renegades’ progression system. As you fight off enemies throughout multiple encounters, you’ll gain credits, DNA, Intel, and Imperium Tech. While credits are a currency that can be used to purchase equipment for your squad between planets and DNA are essentially experience points used to level up your renegades, Intel and Tech allow you to unlock new renegades, weapons, armour, class perks, and drone upgrades whenever you start a new playthrough, back at your base. With that said, the permanent upgrades feel very superficial, they don’t really provide that big of an advantage if you’re struggling with the game, however, I’m all in for unlocking new pieces of equipment to find in future playthroughs as it helps in keeping things fresh. Furthermore, another thing that persists throughout playthroughs is the Imperium hierarchy. This is essentially Star Renegade’s version of the Nemesis system from the Shadow of Mordor and Shadow of War games. To put it simply, besides the Behemoth, there are also a few other elite units in each planet with unique traits and abilities, and whenever they defeat you, they’re promoted and become tougher, but if you manage to defeat them you’re rewarded accordingly for your efforts. 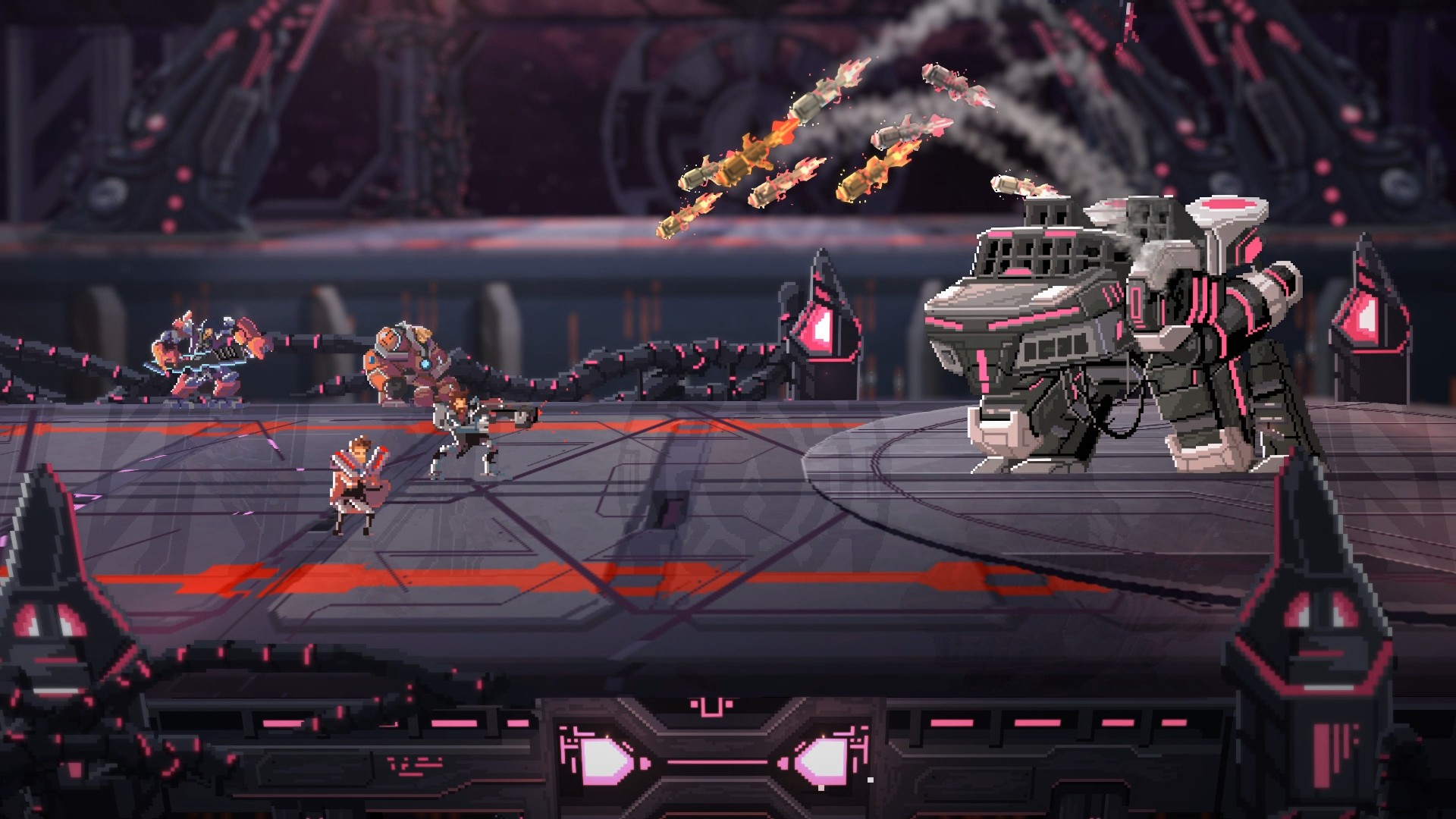 Finally, there’s also another gameplay system that is just the cherry on top. As I’ve mentioned previously when talking about how each mission plays out, you’ll be forced to camp while you’re roaming the planets, and this is where the companion system kicks in. When camping, your heroes can not only recover their health and armour, but they can also activate combat bonuses for upcoming fights and develop their relationships with each other through the use of camping cards. These require action points to be used, and since these are shared between your entire squad, you’re limited in terms of what you can do in each camp before going to sleep. As your heroes gain affection and improve their relationship with one another, they will eventually unlock new traits, combo attacks, conversations and even progeny heroes.

There is no doubt that Star Renegades’ combat is highly addictive and has that “just one more” feel to it. There were quite a few times where I’d just tell myself that I’d fight just one more group of enemies and, next thing I know, I’ve already gone through a couple of them. With that said, the game doesn’t really stand out in any other particular way. Sure, it looks and sounds good, but things such as the planets themselves, besides the way they look, they feel and play exactly the same, there’s nothing that sets them apart from each other other than looks. Given that this is a game that is meant to be played through several times, you might start to wish that there was more different scenery to it, but if you’re like me and the gameplay is all you need, then you probably won’t be disappointed.

A single playthrough can take about 4 hours to complete, more or less, so it’s not like this is a short game. Additionally, sure you’ll be unlocking new things to enhance future playthroughs, but as you play the game more and more, you’ll also become more experienced and you’ll start to have an easier time in dealing with the same enemies as you grow more accustomed to the game and its systems. A good amount of my time was spent trying out all the different classes and figuring out what were the best possible synergies that I could come up with to defeat different enemies, and I’m sure that many people will also spend a lot of time figuring out what’s the best possible squad in the game. Despite its shortcomings, Star Renegades stands on its own as a testament to how to perfectly relate the gameplay loop of a game with its setting. It’s undeniably one of my favourite tactics games of recent years, and if Massive Damage’s previous game is anything to go by, I honestly can’t wait to see what the future holds for Star Renegades.

Despite its shortcomings, Star Renegades stands on its own as a testament to how to perfectly relate the gameplay loop of a game with its setting.