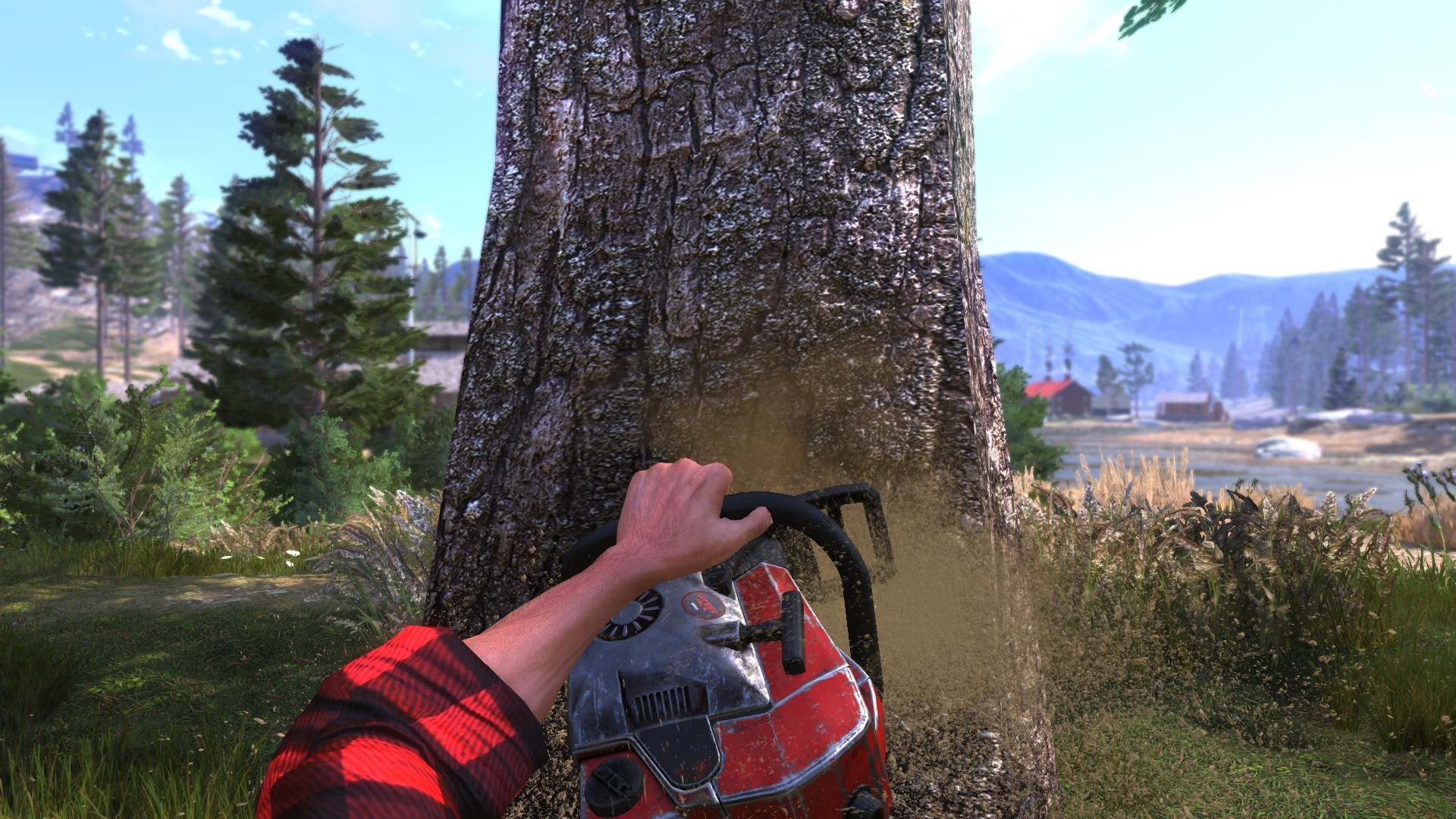 So many people dream of escaping to the country; fresh air, the great outdoors, and a more relaxed way of life. It doesn’t surprise me that farming simulation titles are big business. Blending the countryside fantasy, with the fascination of big boy toys in the form of tractors, cultivators, combine harvesters, and many more. I live in the country, but still love the escapism that comes with the theme and genre. I have played nearly all of the farming simulator games, and have an odd fascination with the tree felling side jobs. When I saw that Lumberjack’s Dynasty had been released for Beta testing, I was genuinely excited. Developed and published by Toplitz Production, this title has you controlling one man who has decided to help his aunty and uncle sell their business, while escaping from the hassle of city life.

The game opens with a cinematic of a rugged young man who looks stereotypical of a lumberjack. He is riding the bus to the country, he plans to help is aunty and uncle, while reliving his youth in his favourite lumber yard. On meeting your aunty you instantly get chucked into the action in the form of a tutorial. This explains the use of the inventory, how to use tools, and drive vehicles. Luckily, you receive quite the in-depth explanation of how to fell trees and how to transport them. You’d expect this to be the backbone of the gameplay as the title suggests, well you’d be wrong. Oddly enough, Lumberjack’s Dynasty has rather a loose storyline and quest function. Like with Harvest Moon, this game is all about building up your own empire, whilst ensuring that the local community is supported. You are asked to clear land, repair buildings, and a number of other tasks, strangely the people of this town are broke, so most of the jobs are paid for in kind. An old tractor, trailer, and other equipment are used as payment to help you get on your way.

Your aunt and uncle own quite a bit of land, this houses a number of different farm buildings. Once you have repaired them, you are free to utilise them to make some serious money. Currency is broken down into 2 distinct categories; cash and social points. Both can be used to buy goods, but how you obtain them varies. Cash is generated by selling goods; planks, animal products, food, basically anything you can produce on the farm. Social points are earned when you complete quests. You may be thinking, what do you need to spend your money on? Well, you are free to buy land, and equipment to make your life easier. The better the equipment, the easier it is to complete tasks, and to earn more money 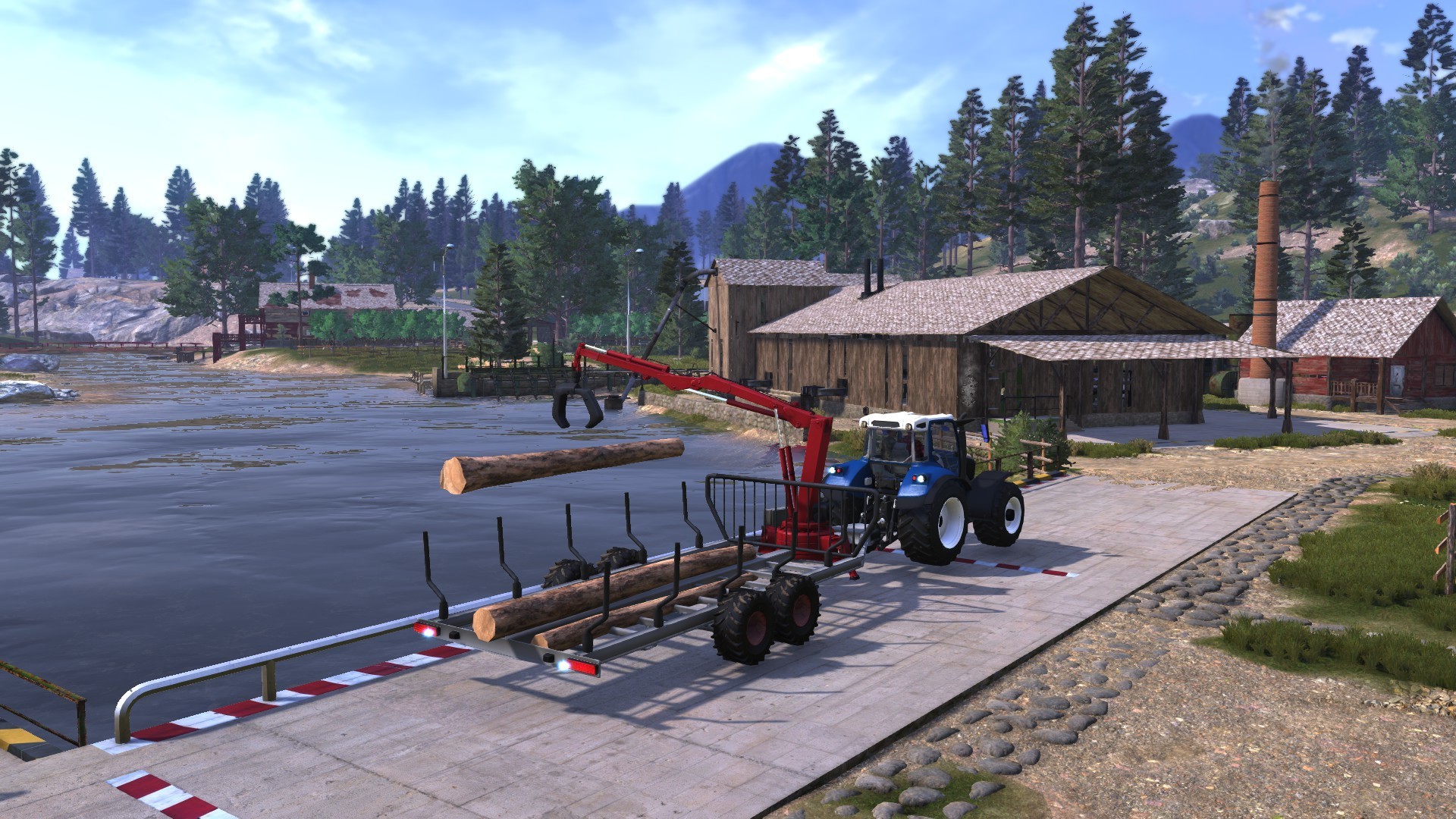 Lumberjack’s Dynasty isn’t just about felling trees, it’s much more than that. It’s about bringing the farming culture to life and building a sense of community. I’ve already stated that this is currently in a Beta stage, and for a lot of players this will set alarm bells ringing. Have the developers created a stable enough product for their fans to enjoy? Will its current gaming mechanics, and general concept be strong enough to make it a success? Are there any game breaking bugs, or hilarious glitches that are worth noting? I’ve covered off the background to the game, so lets look at it in much more detail.

I’ll start with the obvious disclaimer, the title is still in development, so my views and opinions could and probably will be outdated sooner rather than later. Quite a lot of the early action revolves around repairing buildings. What I have discovered while playing is that I have been completing my DIY tasks incorrectly all these years. Our protagonist either has an extremely large backpack, or he’s a magician. He has the ability to produce an unlimited amount of scaffolding from his bag, also no matter what needs to be repaired, you’ll find a trusty nail gun fixes all ailments. Now I’m sure this is something that will be adjusted, because even I know that you don’t repair a greenhouse using a nail gun. The title struggles with a feeling of realism; as a simulation game, it’s such an important element to get right. The NPC’s are really wooden in both movement and speech. Cars drive around in a set routine, and if you happen to crash, then they just stop as if nothing has happened. The game theme pushes the countryside experience, but in reality, it’s dry, bland, and wooden gameplay delivers the complete opposite. This is a recipe for disaster, and will no doubt put off a lot of potential players.

As you can see throughout this article that there are several images depicting a nice, clear, crisp and idyllic view of the gameplay. I’ve looked at them and thought, wow this looks great, the developers have done a top job. Unfortunately for me, this wasn’t how I was able to experience the gaming world. My version was constantly played out in what can only be described as twilight. Everything was dark, areas were impossible to navigate, jobs were tough to complete, and for some unknown reason, everyone’s skin had a sweaty shine, as if they had run a marathon only moments before. The cinematic is humorous throughout, though I can’t think this would have been intentional. The acting is appalling, and the animation to go with it is equally bad. The lip syncing is off, and the movement is so robotic, that you’d think you’ve driven into some sort of 1960’s Sci Fi convention, which is all about androids. For all its graphical drawbacks, there are some really nice bits, the map, HUD, and navigation pins work well, and are easy to use. The engineering view for jobs helps you to clearly identify what needs to be done, and the animation for using items is smooth and realistic. I do have to add now, that I was able to contact the developers who sent me a guide on adjusting my PC settings. This resolved most of the issues, but left me wondering why on earth should a player have to manually adjust their settings in order to play a game correctly, I’ve personally never had these sorts of problems, and can’t see how a game is looking to make it to market in this condition.

Whenever I play a game that embodies everything that is great about country life, I want the audio to transport me there. I want to hear the wildlife roaming free around me, the wind blowing through the trees, and the rain hammering against the ground. Luckily Toplitz Production has created an atmospheric audio. Using equipment, to the felling of the trees, it all sounds realistic. The music is equally enjoyable, a folksy sound which compliments the theme. The big let down is the spoken narrative in the cinematic cutscenes. The wooden nature is laughable, the acting is so bad that it’s good. It reminded me of a low budget film, this matched up with the poor lip syncing, making the cutscenes memorable for all the wrong reasons. 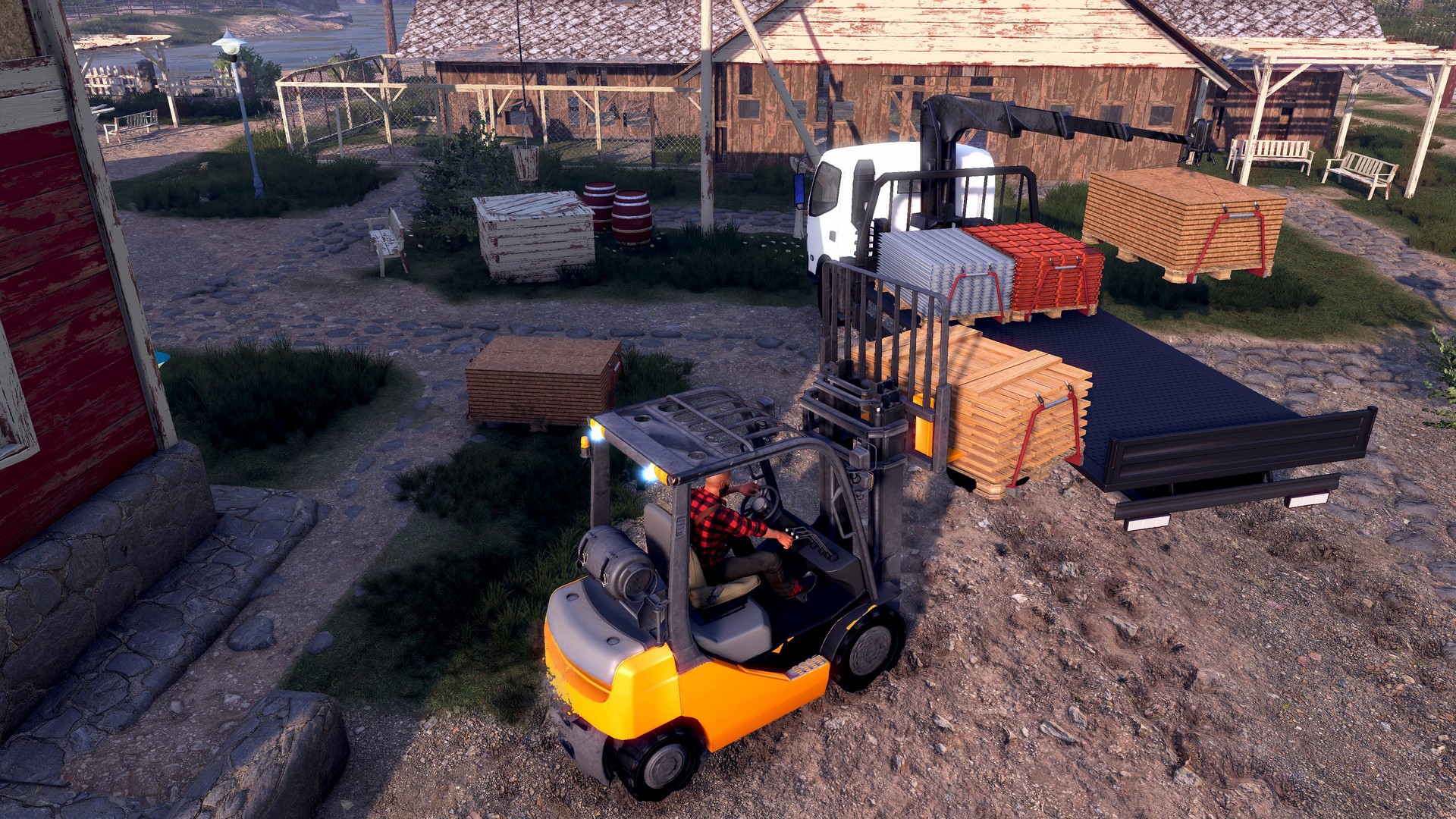 Like with most PC titles, the developers have allowed for either mouse and keyboard, or controller support. Being mainly a console player, I opted to use my Xbox controller. I soon ditched this as I found it was slow to respond, and even the simplest of tasks took forever. The mouse and keyboard setup was surprisingly good, it was easy to flick through the inventory, keys are utilised to quickly select items, and I personally found the controls were easy to pick up, and quick to master. What was terrible was using any vehicle, they felt weightless and unresponsive. Controlling your heavy machinery felt cumbersome and sluggish. This is an element that needs attention, there was nothing fun about struggling to use the equipment. Most of the time I opted to move the logs manually, rather than waste my time trying to overcome the many faults that I had experienced.

The joy of all simulation titles is the relaxing gameplay, and the enjoyment of returning to slowly progress. Does Lumberjack’s Dynasty draw you in? Does it have that ability to say “Just 10 minutes more?” In this current build, no. I did have fun playing it, but it has a rather short quest line that ends quite abruptly. The jobs at the moment are too limited, and therefore feel repetitive. The issues with the controls sucks out whatever fun is to be had, and turns it into a tedious mess. If the developers build on the foundations they have, then this has the potential to be an epic simulation title, but I wouldn’t expect it to hit that height for quite some time.

I always enjoy getting to grips with a Beta title. I like to see how the gameplay develops, and watch all the issues slowly being ironed out. Unfortunately, going down this route has its pitfalls, and you have to be open minded and realistic about what you will experience. Lumberjack’s Dynasty has quite a way to go before its ready for its full release, with numerous gameplay issues, repetitive and limited tasks, robotic and unrealistic NPC’s and graphical glitches that ruin the whole look of the game. I believe the potential is there to make this a very good realistic and relaxing experience. My recommendation would be to give this one a miss for the moment, and see how it naturally evolves. You may as well store away your axe, and hang up your chequered flannel shirt, I don’t think that you’ll be requiring these for some time.

Still in its Beta phase, and unfortunately showing it. With a number of issues to iron out, you will have to place your lumberjack dreams on hold for the foreseeable future.