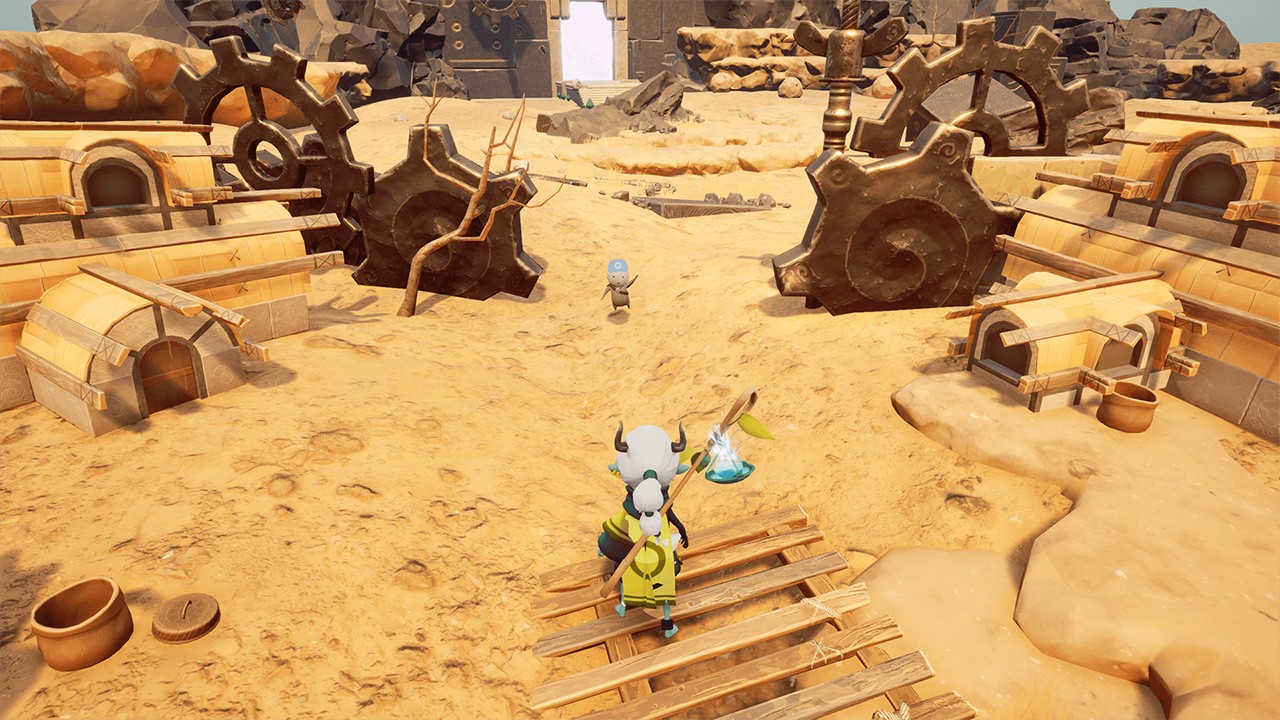 At first glance, Elli may not feel like an indie game. The trailer showcases it beautifully; the description paints an intriguing picture and the title screen is nicely polished. Elli was developed and published by Swedish indie game developer BandanaKid, and I must admit, they’ve done a decent job.

The fluidity of the cut scene animation won’t be winning any prizes, but the aesthetic of Elli is gorgeous. The cell-shaded graphics are perhaps one of its best features – bright, full of colour and with a range of picturesque environments. You start off in lush green hills. Moving through the much darker, moodier atmosphere of the Sun Temple and the dungeon. Sometimes stumbling across the tiny villages of the Mandragora, the strange, humanoid race that inhabit the land.

As cute as they may be, however, the Mandragora don’t make a particularly memorable cast of NPCs. Their design is rather nondescript and the dialogue, at times, is downright confusing. Any defining features the Mandragora are given are stereotypical, like Mimimo the Explorer, and Burt the Handy, who comes complete with a wrench and overalls.

Elli herself is a Guardian of the Crystals of Time and presumably not a member of the Mandragora race given her differing appearance. On the surface, she looks interesting – antlers, long, flowing white hair and blue skin – but she’s a mute, blank slate protagonist and thus, not the most memorable. The controls are simple and quickly grasped – Elli can jump, pick things up like bombs and rocks and throw them. She also carries a magic staff which reveals invisible platforms and shatters pots, an ability that adds a lot more fun to the gameplay. 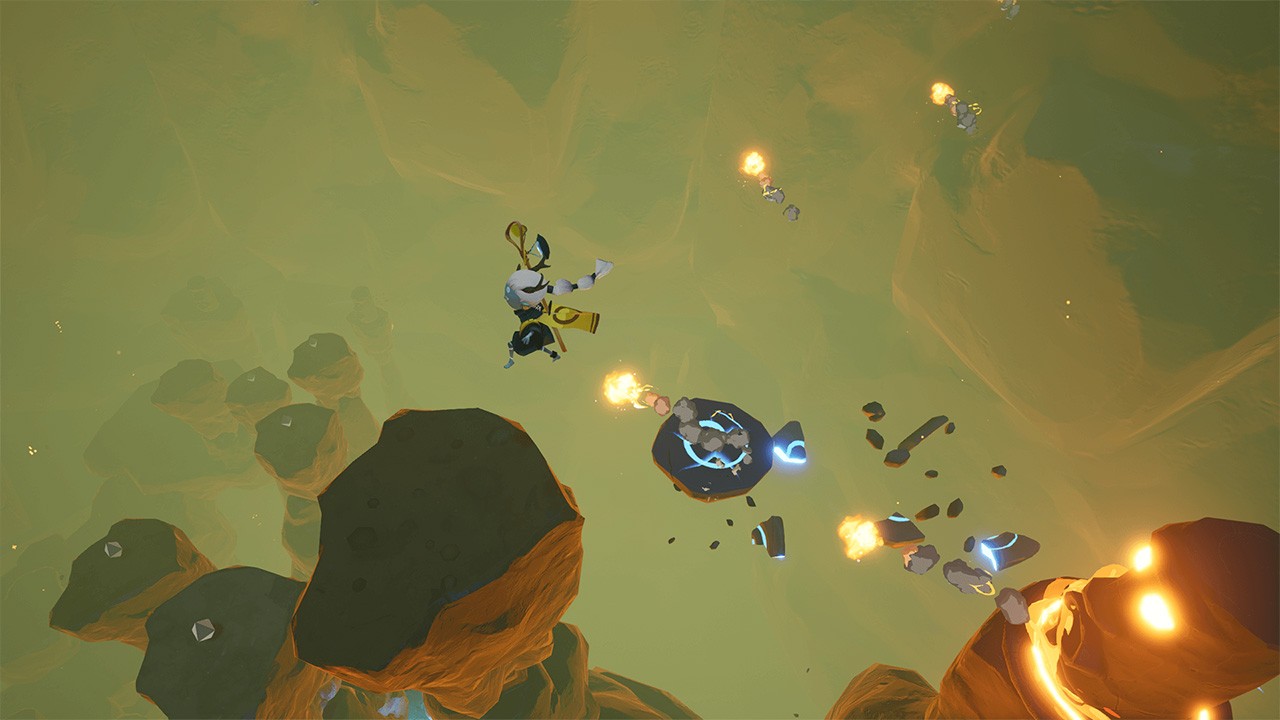 Shattering pots are a worthy pastime in Elli because you’ll often find crystals in them, which act as the game’s currency. The colour of the crystal dictates its value, and if you save up enough, you can buy hats, different coloured robes, and new staffs. It’s an attractive feature, but only serves the aesthetics, as the extra staff designs come with no new powers or abilities despite the increasing prices.

The basic plot of Elli is nothing to shout about and has been utilised again and again in gaming – the villain, Ghasti, steals the Crystals of Time which are guarded (not very well) by Elli, and Elli must pursue her to get them back before the universe collapses in on itself. The intricacies of the plot are all explained, badly at times, in bits and pieces from the Mandragora as you progress.

The soundtrack is a lovely addition to the game, with plenty of strings and varying sounds depending on the environment you’re in. Outside in the blazing sunshine you’ll get gorgeous violins, while in the depths of the dungeon there’ll be deep, heavy drums. The sound effects are crisp and clear, even down to the slap of Elli’s feet on the stone walkways.

As for the puzzles in Elli, you’ll find there are a few recycled brainteasers, but ultimately, you may be pleasantly surprised at the quality. They start off relatively simple but get harder and more varied as the game progresses – you’ll be tasked with collection quests, timed puzzles, a maze, and even an area shrouded in darkness wherein your staff can be used to light the way. The puzzles smack of The Legend of Zelda to a degree, so if you’re a fan of that, Elli will prove somewhat easier.

Some areas do sprawl a little and with no kind of map to guide you and remind you of where you’ve been, it’s easy to get turned around. The lack of a free-roaming camera can mean the perspective is disorientating at times but it isn’t a blinding problem. Elli herself ultimately handles well with the analog stick, meaning you won’t be pulling your hair out when it comes to jumping from one platform to another and walking along narrow beams. 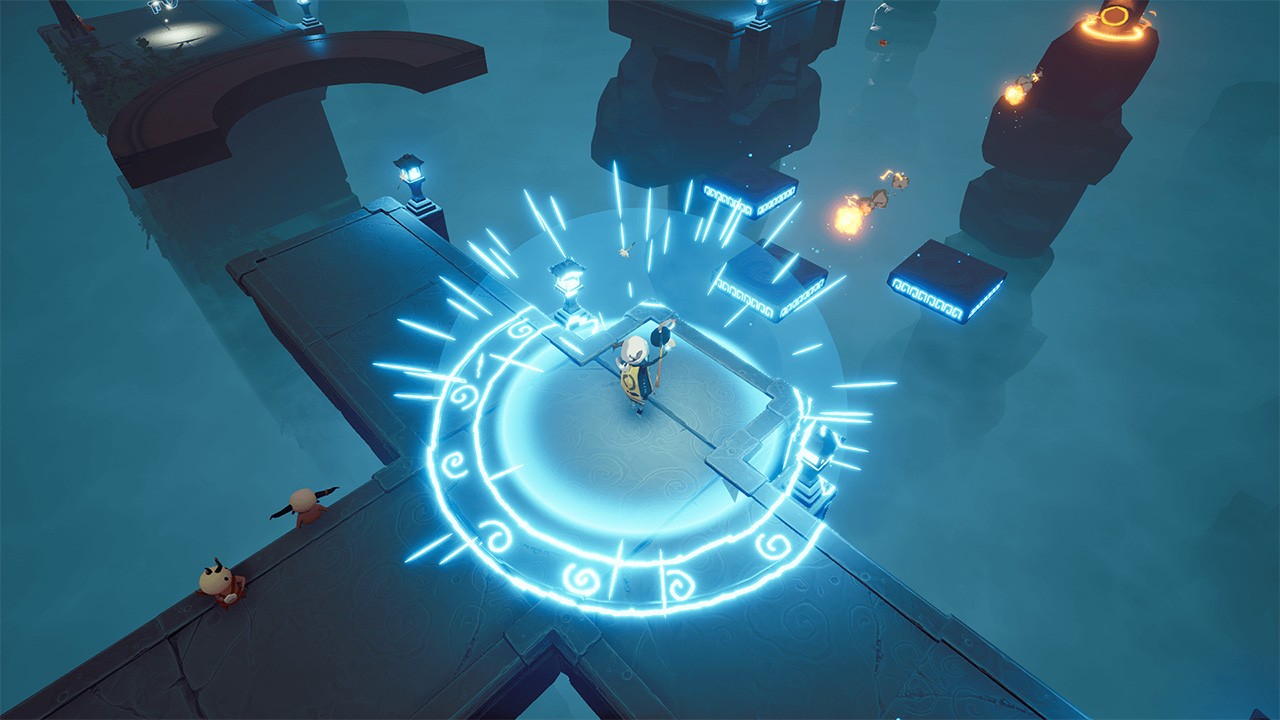 One great feature that breaks up the puzzles is ‘time walking’, as it’s called in the game. These sections are essentially platform speed runs, where you jump into a rift in time and have to keep up a certain pace to avoid being obliterated by the advancing rift. You’re given extra abilities for these sections, like double-jumping and ‘blinking’, a power that lets you speed forward a bit. Sometimes walks present real challenges the first time round and may have you attempting more than once to get through them.

Elli has some level of replay value – the platforming is enjoyable and could call you back for another play through if you want a game that won’t present too much of a challenge. However, it’s easy enough to beat initially, so a second go may prove predictable and tedious. To complete the game, it’s possible to finish Elli in a day, but if you’re interested in collecting the crystals and taking your time, you’ll get more out of it.

Ultimately, Elli is an intriguing little puzzle-platformer that you’ll get a decent amount of gameplay out of. As a puzzle-platformer, it doesn’t really bring anything new to the table – and for the more experienced gamer it might even bore – but it’s an attractive light-hearted romp that’ll keep you entertained for a while without making you want to rage-quit. If you enjoy the platforming of the Crash Bandicoot games and the sweet air of puzzle games like Youropa and Tin & Kuna, then it’s certainly a worthy purchase.