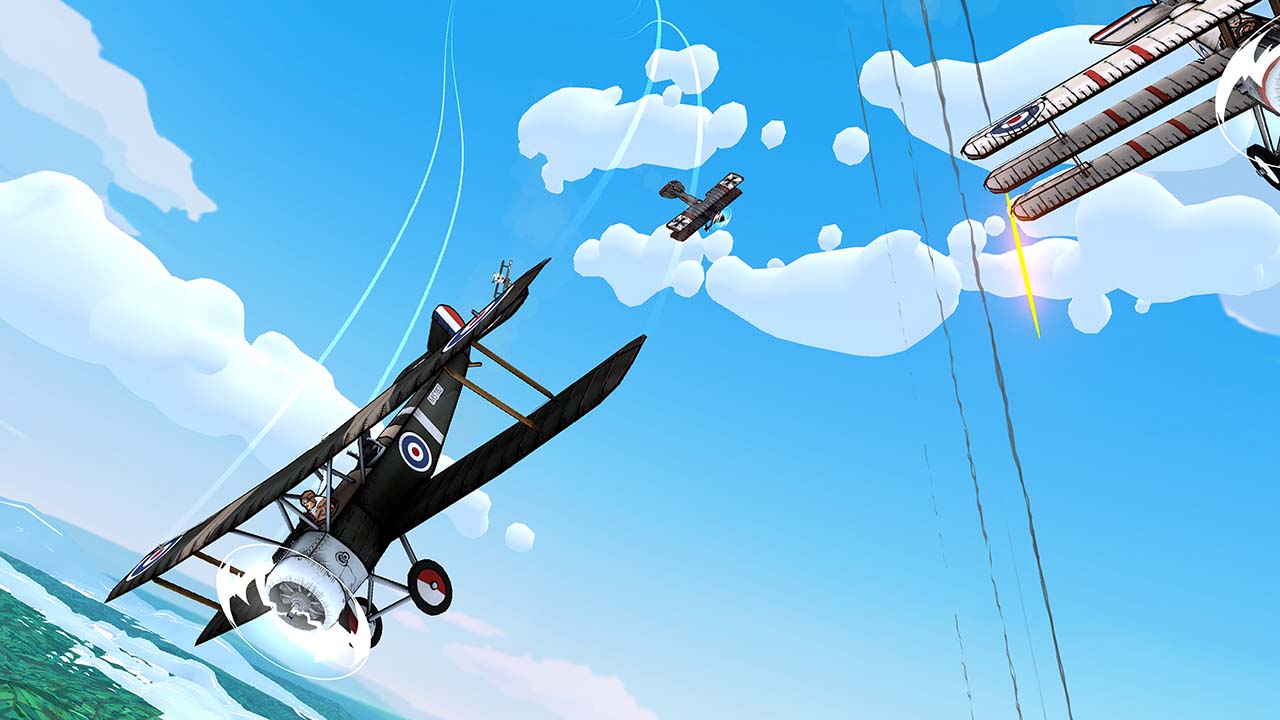 Tally Ho, Chaps! It’s chocks away as Skies of Fury DX takes a barrel roll to land firmly upon the Nintendo Switch. Developed by Seed Interactive and published by Illumination Games, this World War One dogfighting arcade shooter will send you soaring with its simplistic, yet extremely addictive, qualities to a gaming heaven where the skies are the absolute limit.

Set over a campaign of five stages, each one containing twenty levels that are split between the British and German forces, Skies of Fury puts you in the cockpit of ten different varieties of bi-planes and tri-planes in an aerial battle for supremacy of the skies. Covering three differing styles of sorties, you are tasked with completing dogfights, or death matches as they are called in-game, escort missions and time trials. Despite following a simple premise on their gameplay, each of the missions, or levels, available to you have a distinct feel to them that will test your aerial agilities to the max. Both death match and escort missions require you to clear the skies of the enemy pilots, either in a round for supremacy or for protection. Time trials, however, offer a very different experience, where you are tasked with flying through a series of airborne rings within a strict time-limit, whilst shooting floating targets to increase the time available to you. Whatever sortie you are tasked to fly, they all produce an exhilarating experience that will have you flying by the seat of your pants.

This is mainly attributable to the sublime presentation of the title; not just aesthetically but also in its smoothness of performance and control schemes; as well as a very addictive quality in its reward system that just keeps you playing, constantly. With its cel-shaded appearance and extensive colour palette, Skies of Fury’s graphical prowess produces the sweetest taste of eye-candy I have seen for a very long time on Nintendo’s console. Everything is presented in a perfectly clear, sharp and concise manner, with a host of nice features such as sun-blooms, lens-flares and smoke trails which all adds to create an impressive and beautiful looking game. This is all further enhanced by a control scheme that is simply flawless. Although originally a title developed for mobile devices that utilized a touchscreen capability, the transition to a more conventional control scheme has added such precision and smoothness in its execution, that flying becomes an absolute joy. I won’t go too much into the mechanics of the controls, simply because I have so much more that I’ve got to get through; but believe me when I say, it’s a beautiful experience that is simply flawless. The audio qualities are of a similar, high standard too. With a rousing, military-grade soundtrack and punchy sound effects, it all adds to the give the game a triple-A feel and presentation in all of its aesthetics. 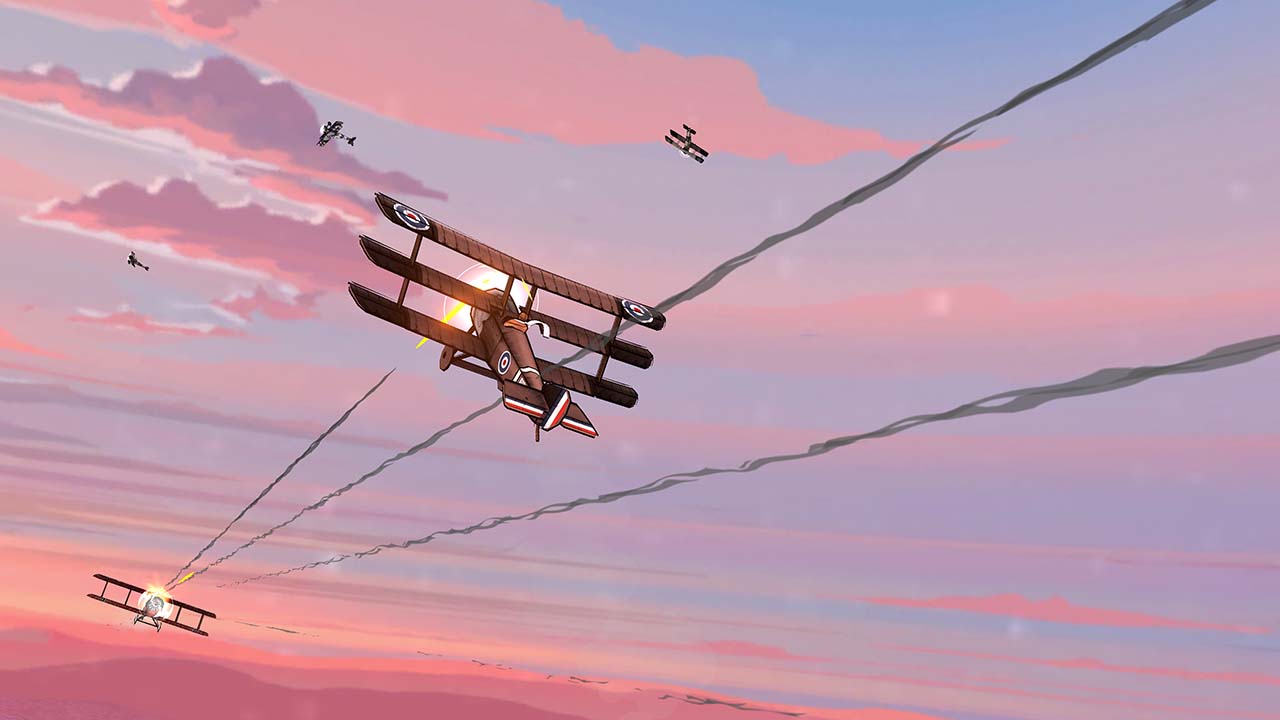 Obviously, the main premise of the game involves aerial dogfighting. This involves combatting various waves of enemy fighters, as well outperforming and outmanoeuvring their skilled pilots in order to keep yourself fully airborne. Thankfully, there are many elements that can be called upon to help you in keeping the skies safe. With a third-person perspective and a firing reticule placed in front of your chosen aircraft, you can pick off enemy threats from afar, or in close combat, with relative ease; mainly thanks to an assisted aim mechanic. This can be further boosted by ordering your wingmen to fly in tandem, or in a tri-formation, to further boost your aggressive stance. However, despite these abilities in attack, it won’t be long before you find yourself within the targeting reticule of a bandit on your six.

To aid you in your defence, each axis of the d-pad corresponds to an evasive manoeuvre, ranging from barrel-rolls to Immelmann techniques, which can help to squeeze yourself from out of the tightest spots. As well as these countering abilities in flight, Skies of Fury also contains a very effective mechanic in the use of cloud-cover. By flying into the structures of mass moisture, you can evade any tail-gating enemies through their lack of visibility; although the density of the cloud formations can also hamper your ability to maintain speed, but it’s a small hindrance that is well worth sacrificing in the pursuit of staying airborne. If all else fails, then you have one last-ditch ability left within your arsenal. Known as ‘ultimate ability’, this comprises of a meter that gradually fills over time and with each dealing of damage. Once full, you can utilize its power with a quick press of the X button, boosting your speed, damage output and shielding for a limited time; often a life-saver when caught outnumbered.

With every victorious sortie, you are presented with a series of rewards based on your performance. Each action performed, from rings passed in time trials, remaining unscathed and enemy aces downed contributes towards a total of XP awarded. This in turn increases levels, which further unlocks other aircraft which you can use. As well as this, each level progression also awards skill points and loot boxes. With your acquired points, you can purchase upgrades via a skill tree. These performance enhancers can range from increased ammo counts, reload time reductions, extra health and faster fire rates, as well as others. These all add in a preparation for the higher levels that brings more ace pilots, increased hit points and deadlier aiming mechanics. Loot boxes, on the other hand, award cosmetic upgrades for all aircraft, offering new skins and reticules for your own personalisation preferences, with any duplicates being transferred into XP points. It’s a very addictive mechanic that simply keeps you playing in order to upgrade your character and receive numerous unlocks and items for your aircraft. 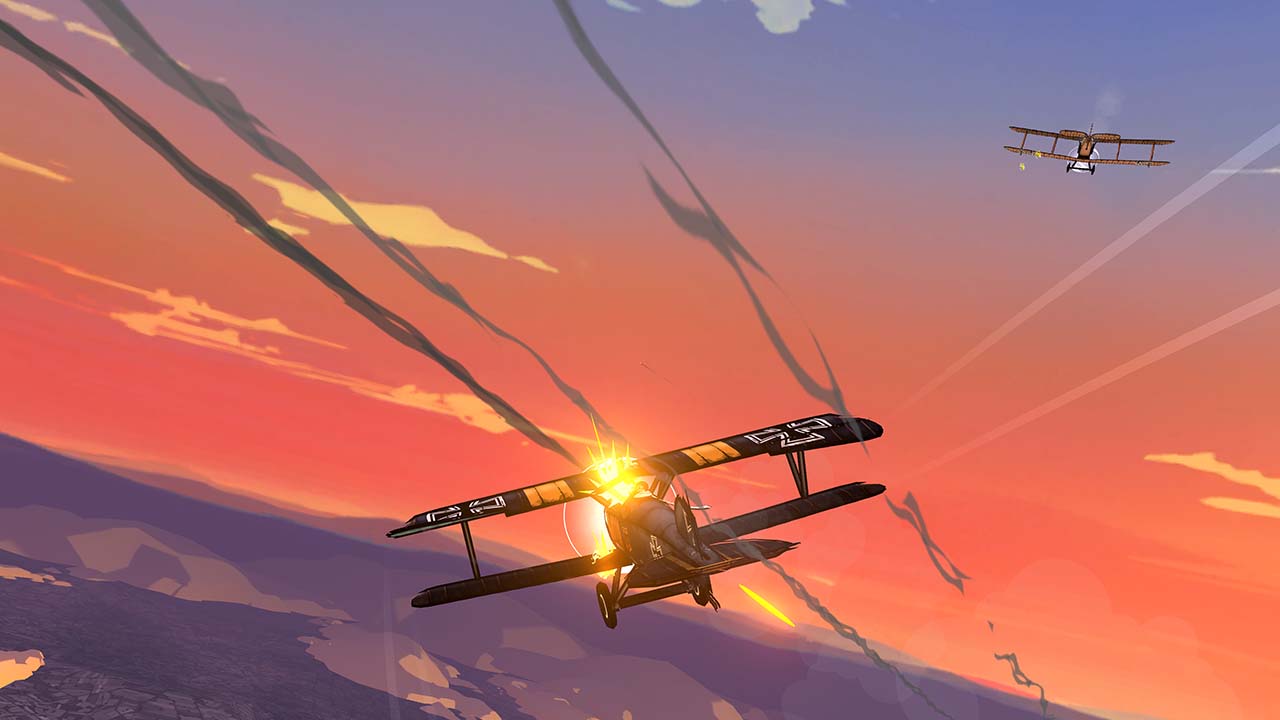 Each level also contains a series of modifiers that changes the stage’s mechanics, as well as alter the level of experience points offered. These adjustments, a series of five per level, alter the state of elements such as aim assists, damage received and enemy difficulty; significantly ramping up the level of challenge from each sortie. However, completing your task with these modifiers set, dramatically increases the level of XP that is awarded. They also provide a form of replayability and longevity for the title, as you can replay completed sorties with a variety of different modifiers set-up. Completing one of the five stages that comprise the campaign, also awards you with a comic-book presentation of the real-life events surrounding the Battle of Arras in 1917. These are nicely drawn and presented, giving another reason to continue playing in order to complete all of the pages on offer, as well as offer an insight into the history of the game’s setting of era.

As well as the single-player campaign, Skies of Fury also offers two further game modes: Survival and Versus, both of which can be played in local multiplayer for up to four players via a split-screen. Survival is as the name suggests. Played either solo or with friends co-operatively, this mode pits you against increasingly difficult waves of enemy fighters. However, each successful wave survival awards various upgrades to you and your allies in preparation for the challenges that lay ahead. Versus offers a player v player mechanic, where you and up to three others compete against each other in order to ascertain who is the ace pilot. These further modes of gameplay offer a great deal of fun, whether in co-op or competitive play and I could find no difference in performance when compared to the single-player experience. These also add to give further elements of replayablity and longevity.

Overall, Skies of Fury DX offers a complete and satisfying package upon the Nintendo Switch, especially with its woefully thin style of genre upon the system. It’s a perfect example of Indie gaming and development at its very best. I really feel that I must take my hat off to Seed Interactive and Illumination Games for creating such a wonderful title. The whole presentation of the game is expertly done, even within the tutorials that are displayed as if presented via a film reel that suits the aesthetic of the era. It’s the little touches like these that create the biggest games. If there’s one potential danger within the game, then it would be a repetition within the mechanics of its level design. However, the level of enjoyment that this game creates is so high, that it can easily alleviate any sense of boredom from a repeated pattern of gameplay. The flying and combat mechanics are sublime, as are the graphical presentations throughout, making this an incredibly entertaining title that deserves to soar to the dizzying heights of the number one spot in Nintendo’s E-shop.