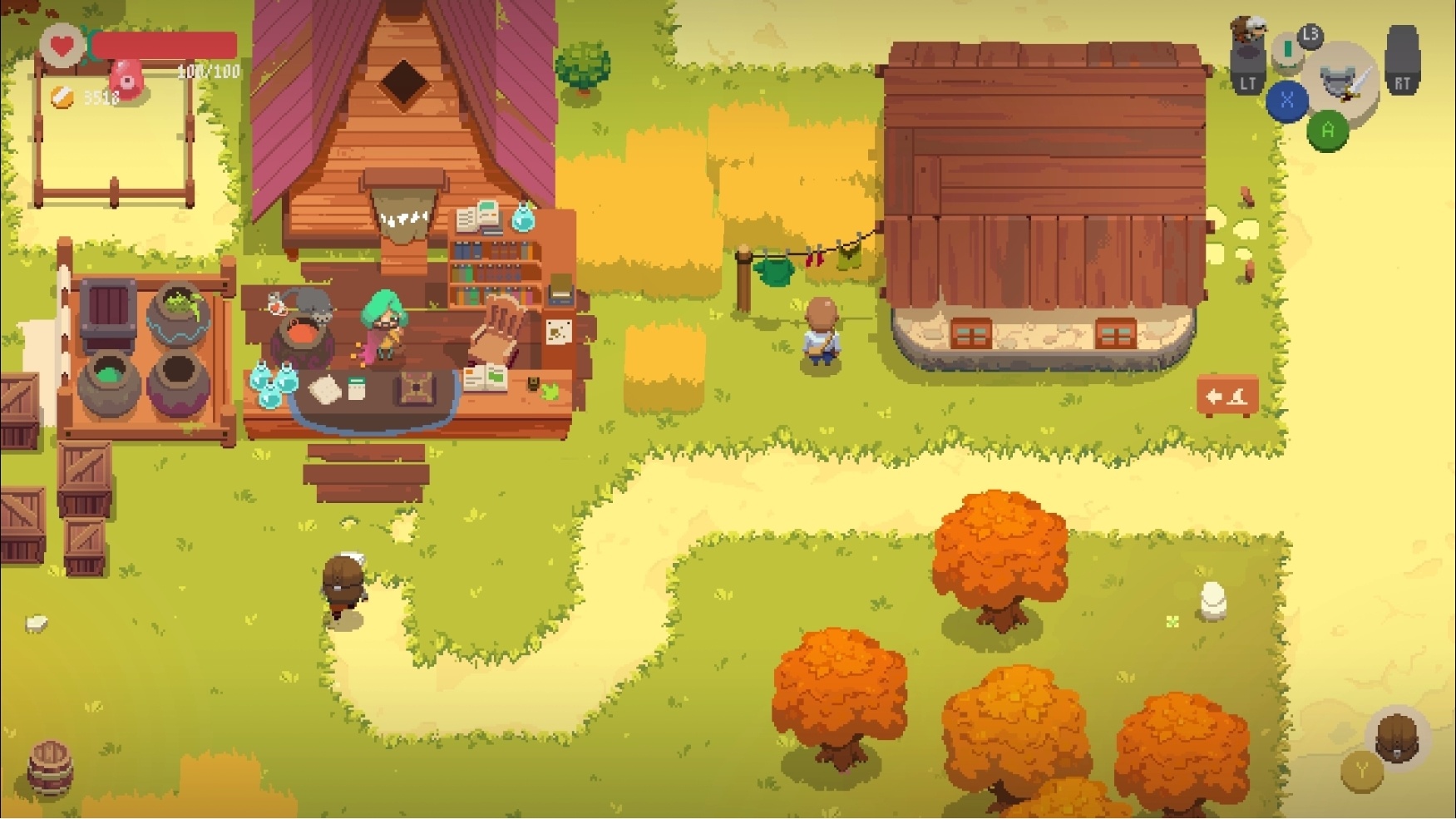 Have you ever sat there, thinking to yourself ”man, I wish there was a game which would combine borderline average rogue-like features, with incredibly stubborn and clunky shop-keeping mechanics, which would drive me to wanting to pull my eyeballs out with a rusty spoon”? Because if so, then the recently released Moonlighter, by the Digital Sun studio, is a game for you – as it combines all that is dull about rogue-likes, with all that is unbearable with stock-management games.

Digital Sun, the Spanish developer behind the title, describes it as an ‘ARPG with rogue-lite elements, which is demonstrating both sides of an adventurer’s life’. And by this, the developer means that Moonlighter is a rogue-lite-like, which allows you to sell the items which you collect on your journey directly to customers, instead of your standard shopkeepers. And while the premise of the retail-based mechanics sounds interesting on paper, then it has to be said that in practice, it is not as enjoyable as the developer would like you to be.

Moonlighter is a hands on game, meaning that you have to do everything by hand – so if you want to sell the items you possess, you have to place them on a counter, price them accordingly, and then sell them to a customer who has selected them. And while the title in question allows one to sell items in bulk, then it has to be underlined that not all customers are willing to buy ten golem cores or ten sets of twine, and this forces you to sell your items one-by-one. And at first, doing so is not problematic as you only possess a handful of resources, but later on in the game, when you have an inventory filled to the brim with countless items, the shop-keeping mechanics are a soul-destroying chore. 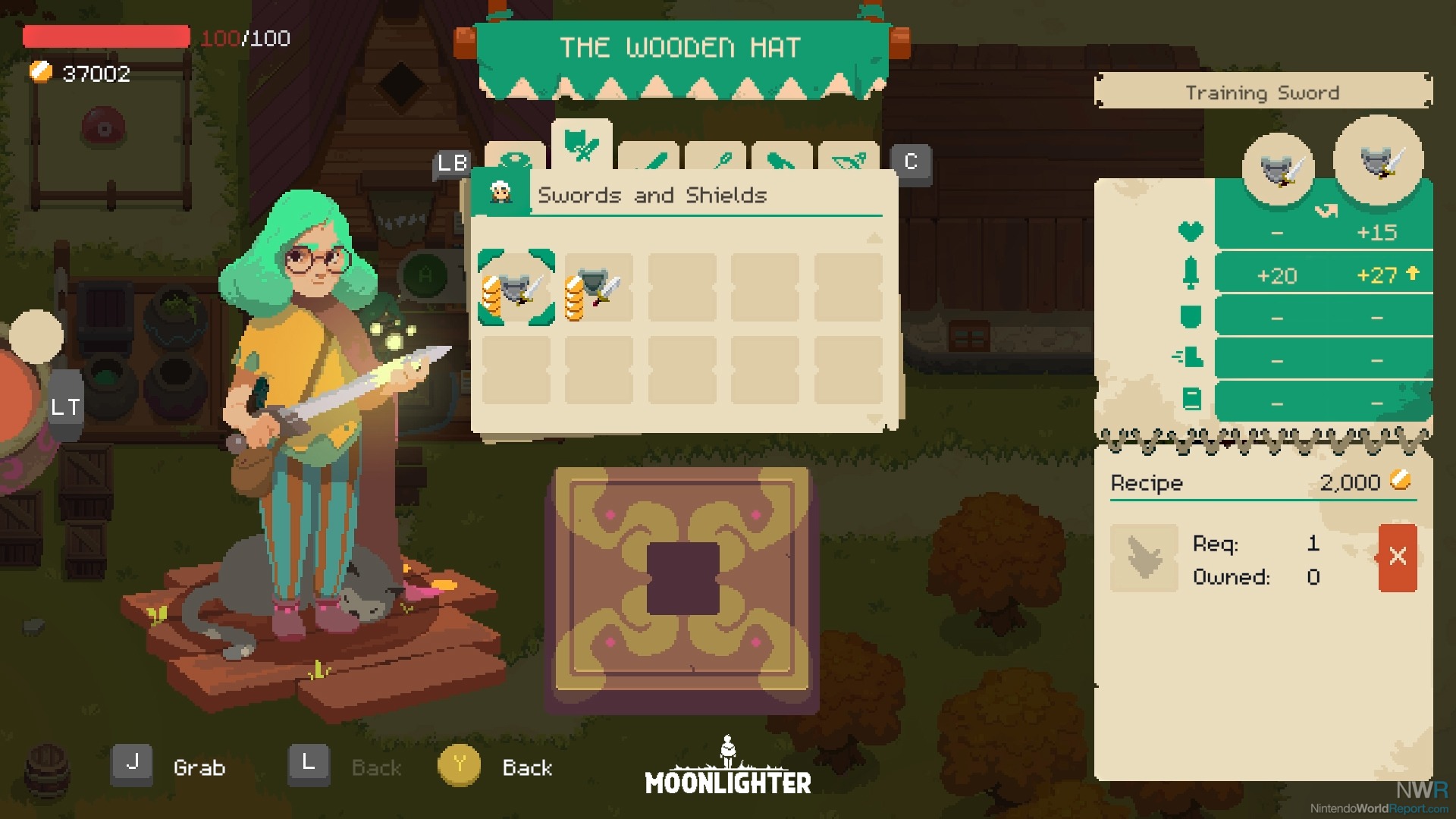 Fairly early on in the game, you are presented with a mirror which allows you to sell all your items on the fly, meaning that you don’t have to bother with returning to your store, in order to sell a handful of trinkets at a time. However, when selling items using the aforementioned mirror, you only receive the fraction of coins which you’d normally get. However, about an hour into the proceedings, once you’re hit with the full extent of the cumbersome and clunky retail mechanics of Moonlighter, you’ll bite the bullet, and will most likely sell the vast majority of items in your possession using the said mirror.

I’m more than certain that there are people out there who will fall in love with all the micromanagement of Moonlighter. However, those individuals will probably few and far between, as even if one were to forgive Moonlighter the absolute lack of any quality of life features, he is still left with an entire array of low-quality cumbersome mechanics, which are simply too elaborate and imperfect to be anywhere near an enjoyable state. That being said, it has to be underlined that Moonlighter, as the developer behind the title states, is a story of two halves. And while the shop-keeping elements of this particular title may not be the second coming of Jesus Christ, then it has to be said that they’re on par with the remainder of the title’s mechanics.

Once you’re done with painfully stacking items on your store’s shelves, you will then be allowed to go on an rogue-lite adventure, where you are on the quest to clear all five chambers, and defeat all five bosses. However, the title’s combat, and the general design of its action elements, leave a lot to be desired. And due to the fact that the developer has clearly split its resources between combat and shop-keeping, it can be easily noticed that Moonlighter’s combat is not as polished, or accomplished as it possibly could be.

In game, you can carry two weapons at all times; and those always feature two actions. And this portion of combat is fairly enjoyable, as having two weapons at all times allows the player to alternate between different approaches to combat and play-styles. However, the nature of this particular title ultimately forces one to play defensively at all times, as the core movements of the in-game protagonist are incredibly slow and sluggish, and ultimately too cumbersome to allow one to create a built based purely on relentless assault. And no matter how much you’ll try to twist and turn Moonlighter’s mechanics, you will always end up running circles, hitting enemies once every fifteen seconds. 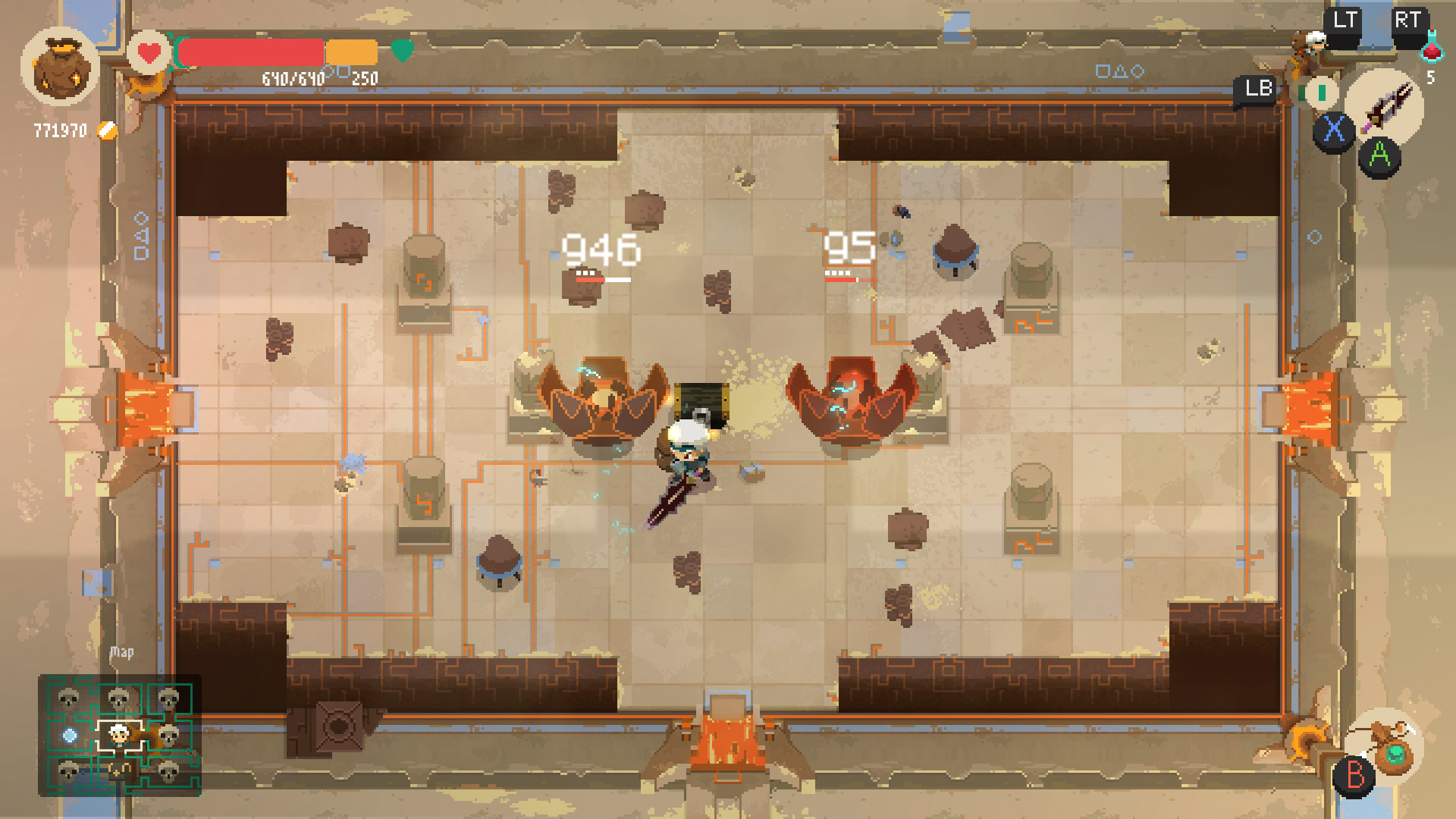 In addition to the weapons system, Moonlighter also features a dodge mechanic which allows one to avoid projectiles and strikes by rolling through them. And while the invincibility frames which the dodge provides one with are incredibly useful, the action in and of itself only further forces one to constantly stay on the defensive – as the action of dodging is just as slow as the rest of the character’s move-set. And in combat you will mostly use dodging not to avoid strikes but to close distance, strike, and dodge away.

Just like the shop-keeping mechanics, the combat of Moonlighter is not for everybody. And if you are like me, and have played through Dark Souls 3 with a rapier, and no shield, then you will surely not enjoy what the Moonlighter has on offer. But if you have slow-rolled through the entirety of the above mentioned title, while carrying a heavy shield and a great-sword, then you will feel right at home while playing Moonlighter – and that’s perfectly fine, as not all games are meant to be for everybody.

Moonlighter is by no means a bad game, sure, some of its elements are subjectively, and undeniably underwhelming, but they are by no means crass or offensive. And as a complete package, with all of its pixellated charm and glory, it works fairly well – but not all will be able to appreciate for what it is. As ultimately Moonlighter is a title which unlike Hotline Miami, has been created for the select few. But those who are the target audience of this particular game, will surely love it with no end. But this doesn’t change the fact that the vast majority of users, will be faced with a great disappointment when experiencing Moonlighter first hand.