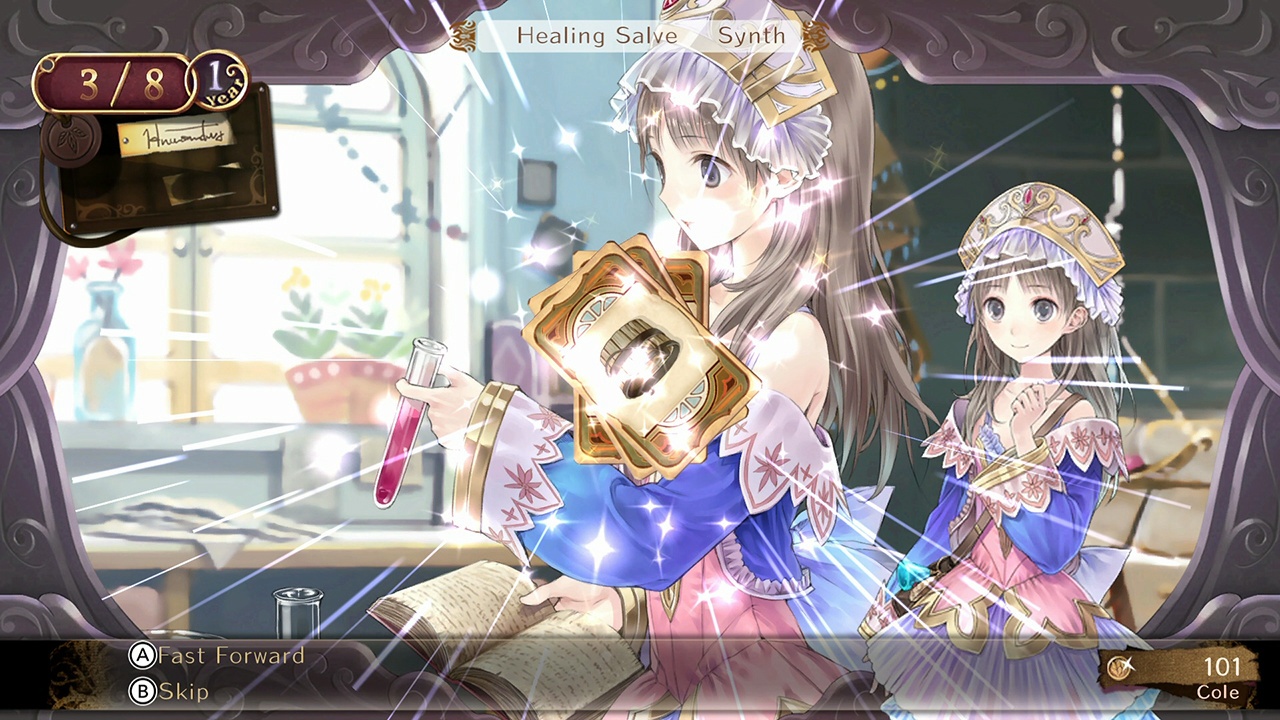 Sequels in games, books and movies often do too much hand holding for fans who may have missed the first installment. Something that made me utterly crazy is how J.K. Rowling felt the need to continually recap Harry Potter’s backstory and different elements of everything right up through the fifth book, which why the hell would that be the first Harry Potter book you read? It’s the worst, it’s the longest, and it’s more than halfway through the seven book saga.  No, I get needing to refresh people’s minds with certain elements, but goddamn is there an excess of spoon-feeding when it comes to the potential newbie who decided to join at a bizarre time. It’s not like you can’t go out and get the previous game/movie/book for pennies on the dollar at a secondhand store, but I digress. Gust really understood a bit about learning from their past and building towards a future, and, most importantly, catering towards fans who’ve stuck it out with them. These are the key elements that make Atelier Totori: The Adventurer of Arland DX far better than its predecessor.

Totori is the name of our new alchemist, who is living with her older sister and studying under the tutelage of Rorona, our heroine from the last game. Five years have passed, and Rorona is now older, wiser, and a decent master who seems more caring and human than Astrid did at the beginning. Anyways, Totori and her sister, Ceci, are doing just fine, mostly, but Totori really cares about her mother’s disappearance: everyone else thinks mom is dead, but Totori begs to differ. Since their dad doesn’t give a damn either way (such a weirdly emotionless dude), Totori sets off on a quest across Arland to find mom, running quests, meeting people and getting more powerful along the way. This is definitely Totori’s story: we may see plenty of familiar faces and have some interesting side expeditions, but everything revolves around Totori, and, honestly, it’s a good place for the game to be and a great persona to follow. 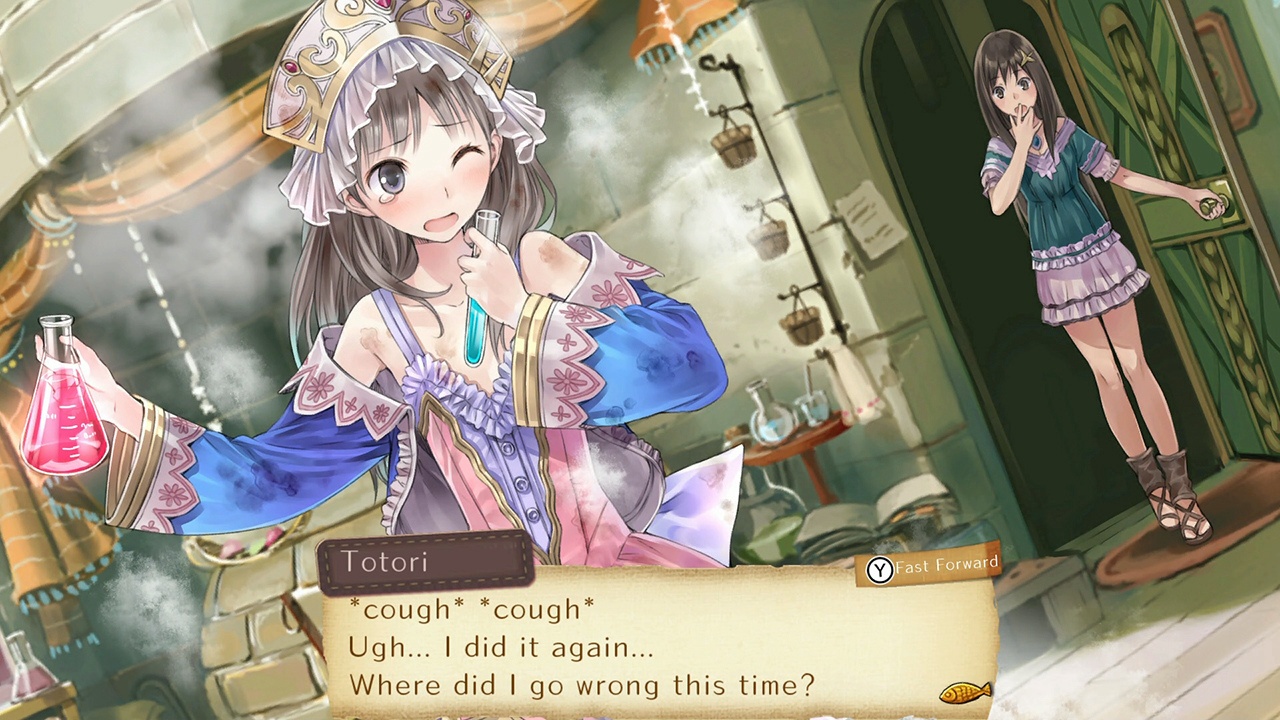 From the beginning, everything about Atelier Totori feels leagues better than the first Arland tale, and not just because the graphics have been updated (which they have been). The pacing of the game immediately feels more natural and cleaner than the previous. You have a chance to see a bit about how Totori lives her life currently, and get a bit of backstory as to what brought Rorona to her doorstep,, before thrusting us forward into a global quest to find a woman who very well may be dead. There’s a spot of tutorial here and there, but most of it is easily skippable, and, best part, if you played Rorona then you sincerely don’t need to worry about skipping things here. You’ve already got your sea legs, you know all about crafting, adventuring, chatting and hiring people, but now you worry less about your stupid shop’s reputation and more about your own, because you want to find mom and people are more apt to aid an adventurer with credentials.

The rebalancing also comes in the form of the gameplay being more evened out. My biggest complaints of Atelier Rorona were the time limit, the simple combat and the over-focus on the crafting, despite it being more like watching cutscenes than anything else. The time limit still exists, but it’s not a continual doom clock anymore. When you pick up a quest, you now have a deadline to focus on, and, amazingly, you aren’t always on a quest. Sometimes you get to just focus on the big quest of, you know, finding your mom, and there isn’t a time limit on that. Sure, you’ll always be picking up quests to get information, gain passage and generally be a good protagonist, but it feels more optional and organic and less “do this or it’s game over.” This idea is so refreshing it’s almost hilarious that I’m praising it when any other RPG would do the same. Again, when you come straight from a dire situation, having things simply be “normal” feels like a present from heaven.

With this removal of the timer comes a better use of the combat in the gathering fields and overworlds, and it’s one of the stronger elements in Atelier Totori. The monsters are cuter, the fields are wider and the fighting feels more targeted to players who are used to random encounter RPGs, yielding bigger gains and more intensity. Hell, the inclusion of Melvia, a brutal sidekick who is absolutely punishing early on (and more, erm, “developed” than other characters) show a move to a more mature angle within the series. I no longer spent a majority of my time dodging encounters, both because I couldn’t (more stationary mobs, well done!) and because I didn’t need to. Totori got stronger, but she really got a ton of support from friends and family. And, thanks to this being the DX version, all of the DLC characters are available as soon as you can find them, including Cordelia from the first game. 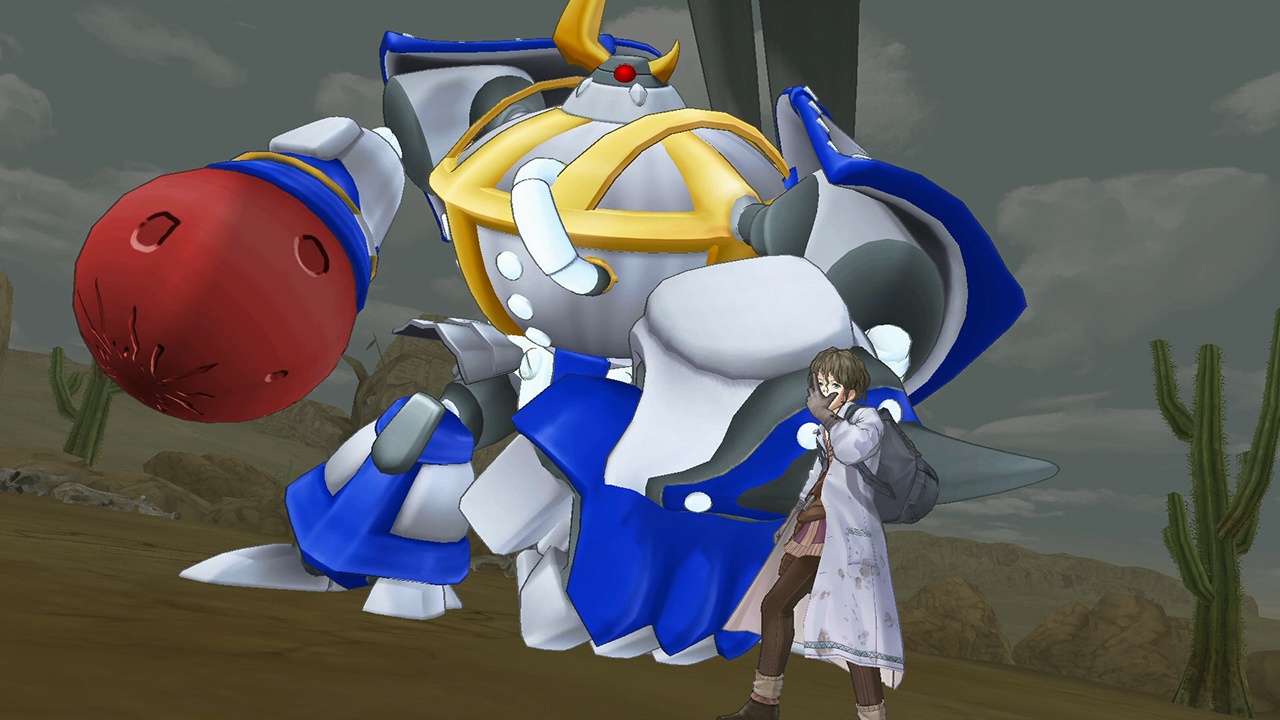 The visual novel element is still present, and the tone, while overall lighthearted, leans further towards moments of sombre and emotional. After all, we’re not trying to keep the shop opened while a clueless child runs around trying to put out fires: you’re on a quest to either find your mother (who has been missing for years by the time the game ends) or help a child come to a very dark realization that her parent is dead.  It’s not crazy heavy-handed, thank God, but it does come up on occasion, and the visual novel screens handle this well. Also, in a reversal from the previous title, I recommend keeping the Japanese voices on for this one. Totori is voiced by the same woman who’s done Toru from My Hero Academia and Yuri from Root Double, and she does a dynamite job giving Totori more range and depth than previous Ateliers.

The only sticking point for Totori is that is does feel like a strange game to jump into without the previous one already having been completed. This isn’t like the Final Fantasy series: there’s more cohesion between the games than just Chocobos and dudes named Cid. Being able to have been in Rorona’s shoes and understanding how perilous and often stressful her role was leads to a deeper appreciation and enjoyment of what Totori has to face in comparison. I appreciate Koei Techmo getting in front of this caveat by having a good sale on the trilogy of games, even if it might be a tad more expensive than picking up a singular title. However, it really is a good idea to get through Rorona first so that you can see where the improvements came in, and why Totori feels so much more satisfying. It’s further along in the PS3/Vita’s life cycle, so the graphics are better, the score is more dynamic and the DLC feels less “fan service” and more “stuff I would actually use.”

From front to back, Atelier Totori: The Adventurer of Arland DX is a massive improvement and a solid entry to the Arland series. If you can only buy one game from the set, this is my recommendation, but you’ll really want to rent Rorona or watch a friend play it to see what I mean. Totori’s journey may not be an easy one, but it’s a great one, and she can thank the work of her master – both in alchemy and game creation – for leading her to this new world that’s so much better for all players.