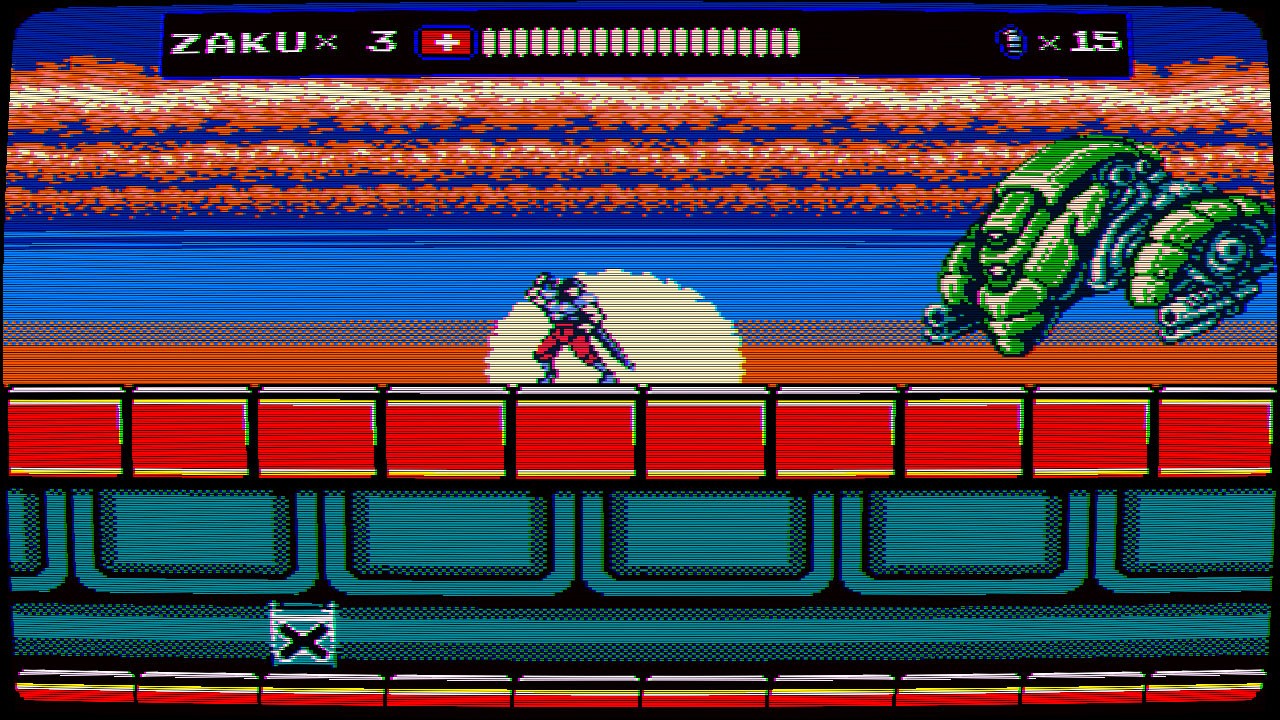 In these crazy times, we all need something to make us feel like a badass every now and again. Thankfully, the team over at Joymasher successfully created a protagonist and game to do just that: ONIKEN!!

Oniken is an action side-scroller platformer with the 8-bit visuals and sounds to send you straight to the village called nostalgia. Set in a world overrun and ultimately ruled by a ruthless military organization not seeking to relinquish their control. Over the years, resistance movements tried to bring down the Oniken, however none have been successful and only a few human survivors remain. Known as a legend and “merciless warrior,” you get to take the reigns as our protagonist, Zaku, and fight your way through missions and environments. “The machines can’t stop him. No one can stop the unstoppable.” Zaku was designed to be that guy. You know, the guy who’s a lone wolf with no apparent emotion, but also a zero-tolerance for BS. The guy who would single-handedly destroy a sophisticated militia without losing a single strand from his badass locks. Oniken is that game. Zaku is that guy. There are allies in the game that have the wonderful privilege of supporting and helping our hero on his perilous journey. 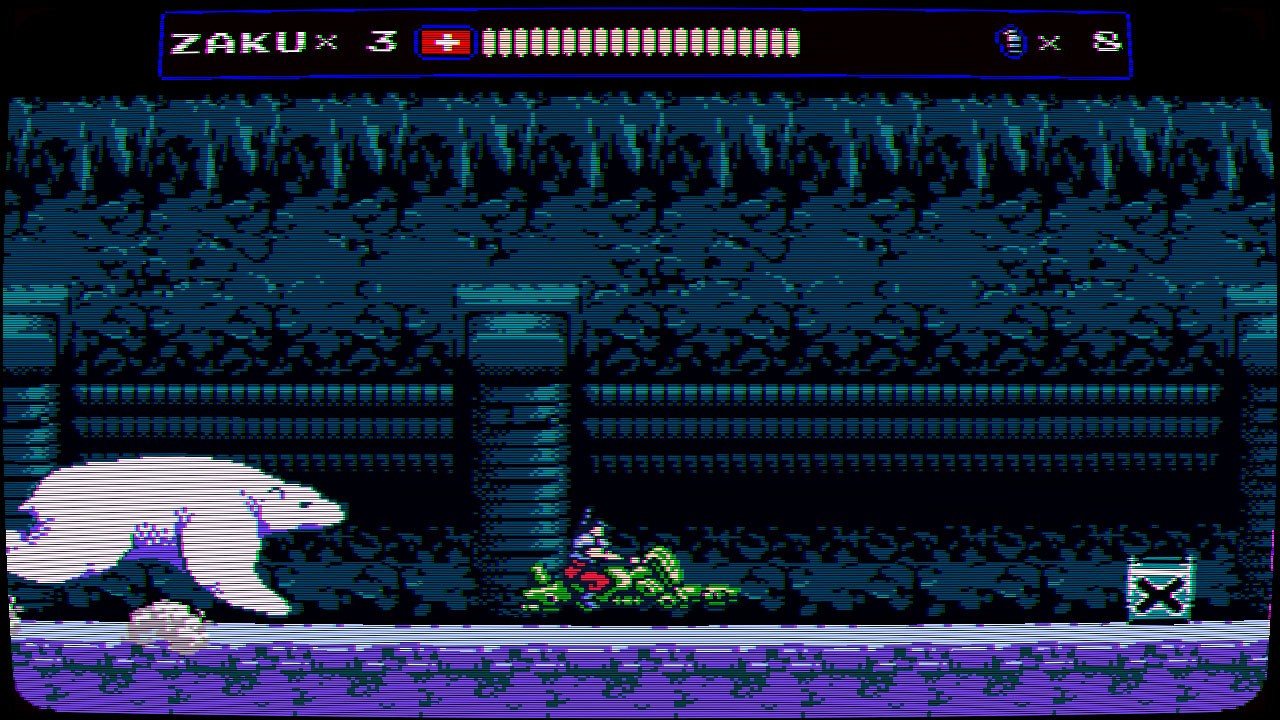 Oniken is played across six levels that are in the form of missions. Each of these missions are further divided into three stages. So, as you progress, you’ll see how far you are on your screen as 2.2 for example. Each level has a secret that you can find, this can be a reward like health or an extended range sword. It’s possible to not come across these secrets, depending on how you proceed in the game. There are some points in the levels where accidentally dropping down doesn’t set you backwards, but rather puts you at a different point in the level and you can continue your quest.

Oniken’s controls for the Xbox One are relatively simple with jumps and slashing being the main activities of the game. I am ashamed to say that it actually took me a while to realise that there are ways to avoid certain death. In the beginning of the game it did not dawn on me to use grenades to deal with the enemies that I don’t necessarily want to high-five. This is where understanding the range of your sword will help. When you come across a sword power-up, this enables you to reach and kill enemies from a further distance. So a timed combination of jump and slash can clear enemies quite far ahead of you. Grenades are limited, but you will find the Oniken is rather generous in the amount you can find and collect. A lot of Oniken, especially in the beginning, is going to be trial and error as you figure out what Zaku can do and the best way to go about it.

The gameplay in Oniken is definitely fun, but you will be pushed to the point of rage-quitting or get very close to it. The enemies and the precision controls sometimes required will feel cruel. At some point I found it worthless to look at my health meter because I was going to die anyway. With that being said, once you get the hang of it (mostly because of ego) you may begin to naturally anticipate certain movements to stay alive. This in no way makes the game predictable. I don’t want to give away too much but hang tight, once you have finished the game – you’ll thank me later. 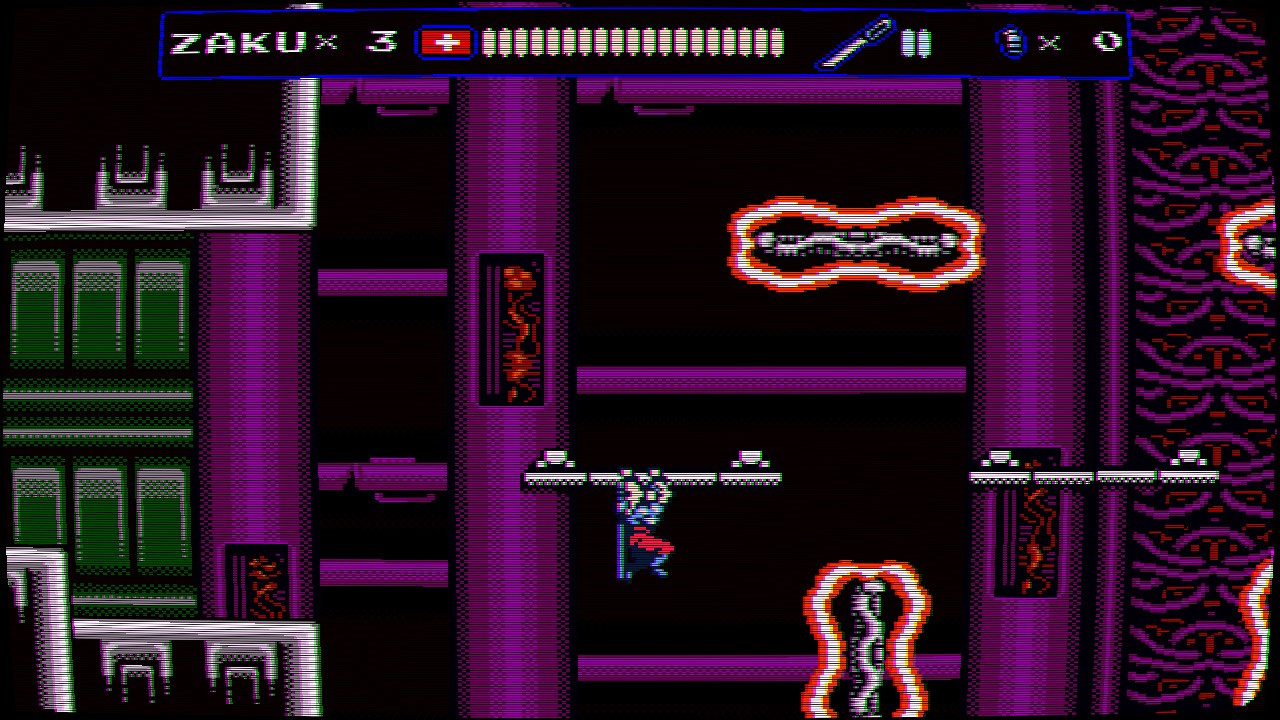 As mentioned, the Oniken is a military organization that makes use of cybernetics to keep everyone under control. So you may have gathered that the enemies are well armoured soldiers and metal bodied creatures. There are also the cursed turrets that seem to be there only to make your life difficult by being right in your path. Yes, you can use your grenades to eliminate them, but there are times where you may have to take some direct hits in order to get closer and get rid of them. When it comes to the boss fights, it will help you to get your mind right and, in a no-quit state. Oniken will see you come across 18 boss fights and yes, you can do it! Each boss will require a unique strategy well-executed timing. One of the quirkiest boss fights I encountered was a cybernetic polar bear. What made this boss fight unique was the fact that you do not fight it face-to-face, but rather you are travelling on a hovercraft with the boss chasing you from the back. To make matters worse, there are obstacles you must hurdle over whilst being pursued which enables the bear to gain speed and close the gap between the two of you. So, your only option is to throw grenades backwards at the boss and as accurately as possible to speed up your progress. By the time you finish Oniken you would have had to fight on a tree, in the rain and avoiding dancing bubbles; and that’s not even the half of it! The difficulty, of course, is increased the further you get, but you may find that some boss fights were harder in previous stages as you become more confident and fluent in your gameplay and use of weapons. The key to the fights is to take time to observe any patterns and time your attacks and defence accordingly.

From military bunkers to sunsets, to what looks to be the inside of some sort of living thing (look, I know what I saw) and even snowy terrain, the environments of Oniken are thrilling and make the game that much more fun to play. You are never visually bored, unless you find yourself stuck in one particular stage for unnecessarily long periods of time. The environments are not just a backdrop, but are there to serve as both friend and foe. One of my favourite moments was Mission 2 (level two in the game). The visuals were comprised of pink, red, orange and yellow hues that created one of the most beautiful 8-bit sunset backdrops I have come across.

Overall, Oniken ticks all the right boxes to a fun and nostalgic gaming experience. There is great replay value for those days when you need the thrill of slashing, shooting and bombing your way through your (virtual) problems.

Apart from the frustration due to ease of death, Oniken is a fun trip as you side-scroll & slash your way to that ultimate boss fight.