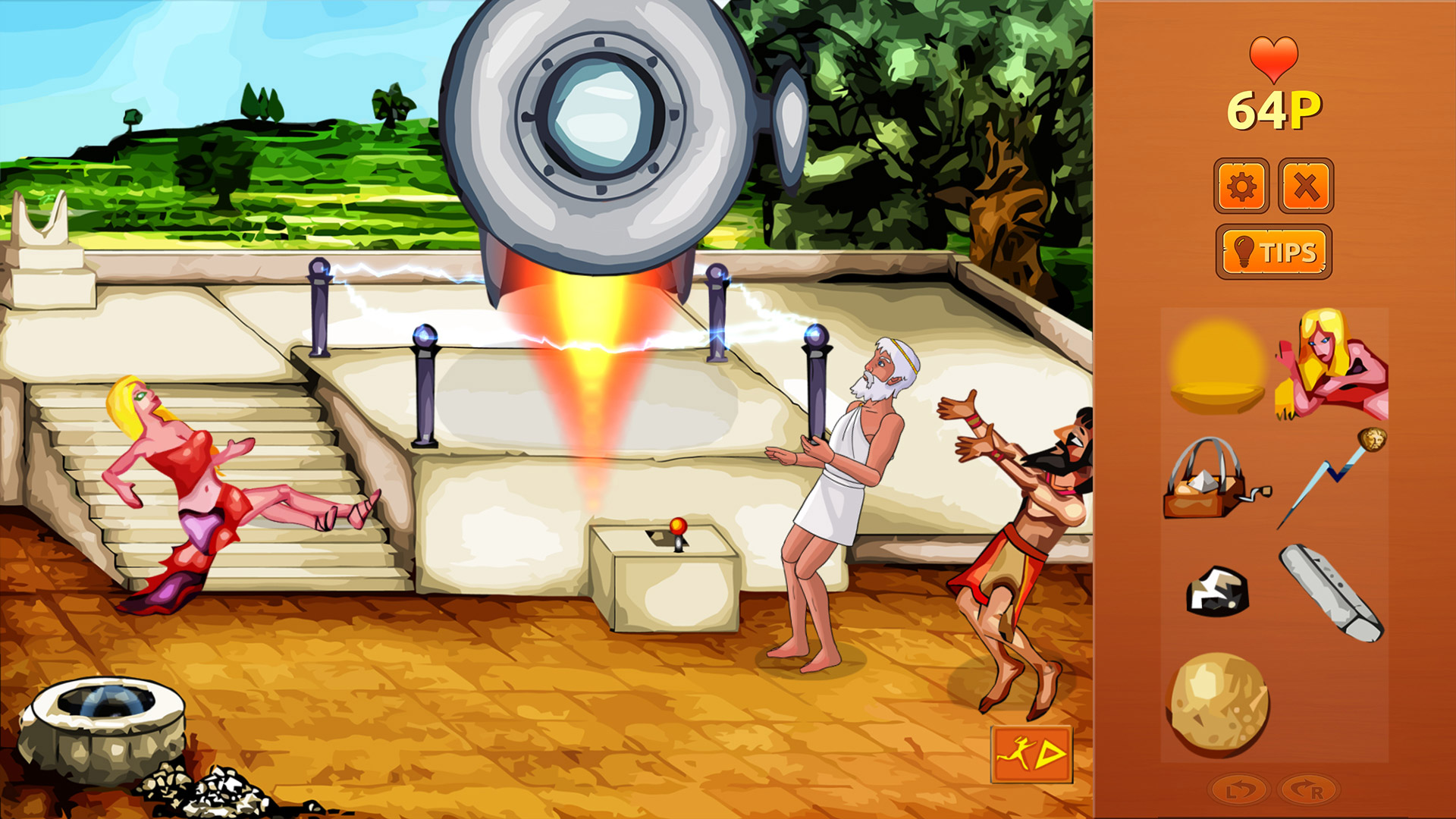 Anyone who has read my previous reviews will know I am a fan of the old point and click adventures. I like to play most games of this ilk, whether they contained well outside of the box puzzle solutions or an engrossing plot as you moved from one scene to another. Personal favourites include Broken Sword, Day of the Tentacle, Bladerunner and even X-Files: The Game. Anyways let us leave the nostalgia behind and see if Zeus Quest Remastered will be something i can add to the list.

Zeus Quest Remastered is a remake of a 2008 game, to be honest it looks like it could easily have passed as a title from 1998. Zeus, the head honcho of Olympus has to return to Earth. The plot begins with Zeus flying his spaceship and crash landing into Santorini Ocean. Unfortunately due to this mishap, Zeus loses his memory and any idea of who he is or why he has come back to earth. You’ll find right at the beginning that the game attempts light humour throughout it’s story, some of it hits quite well and other times, it misses the mark by quite a bit. 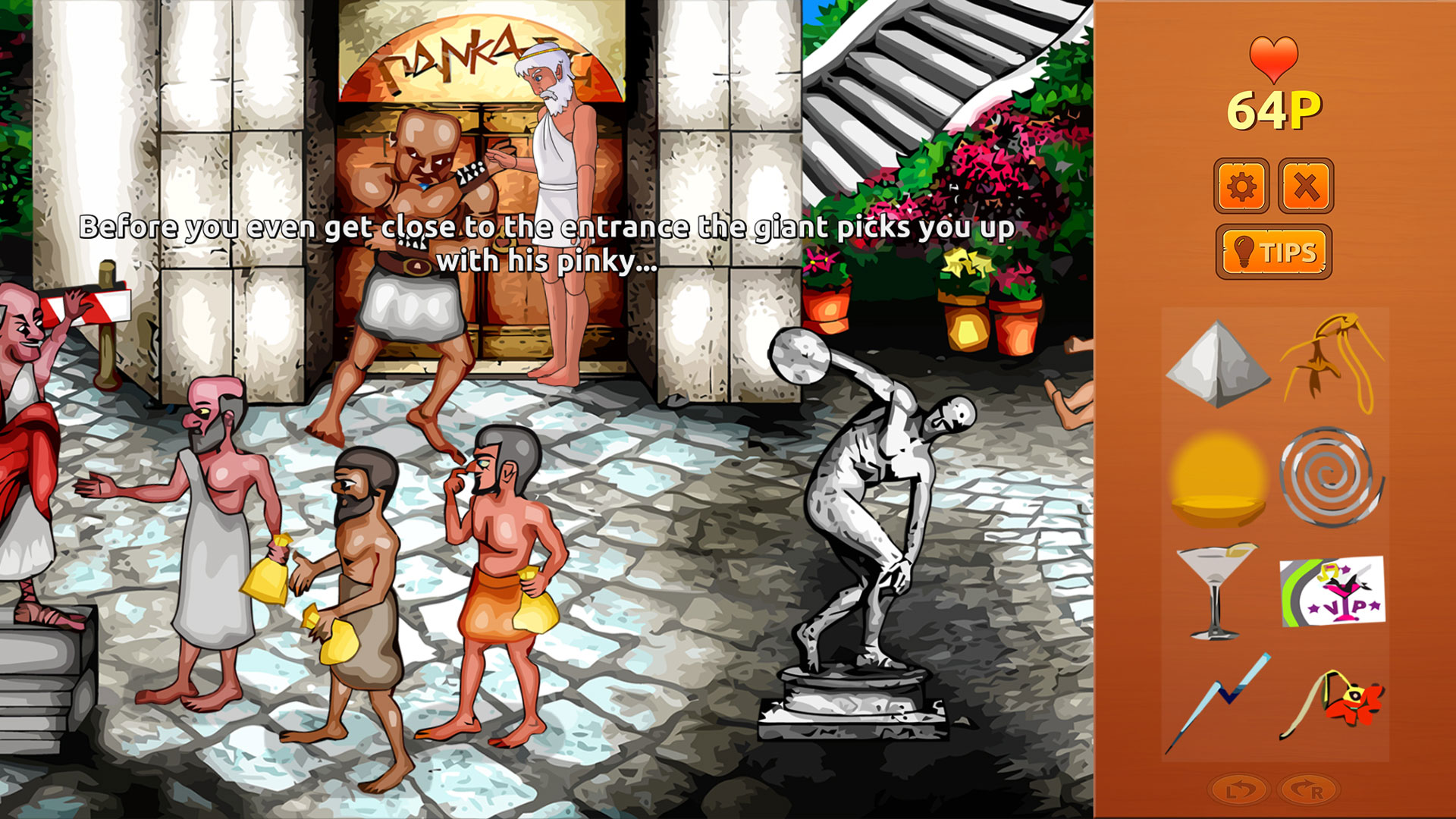 You navigate by pointing and clicking on areas of interest. You have an inventory which you will slowly begin to fill with items that may or may not be needed for your adventure. Zeus Quest Remastered initially is not an easy game in regards to knowing what you are meant to do. The tutorial is a good introduction to the mechanics of Zeus Quest Remastered, but finding out what you need to do and where you need to go is something altogether. There is a tips icon which will show you what you need to do next, which is undoubtedly a helpful addition, although it needs time to fill up before you can use it again.

As previously mentioned knowing what you need to do and what items are required to push the story along is confusing. You are able to pick up an object and also look at an object, sometimes you need to look at something several times before you pick it up, for example there may be a mouse hiding in a hole, but you won’t know it’s there unless you look for it first… The inventory can be tad messy too, you can combine items but sometimes those items are not easily identified by the naked eye, when you hover over an item you would expect to be told what it is, that doesn’t happen in Zeus Quest Remastered. 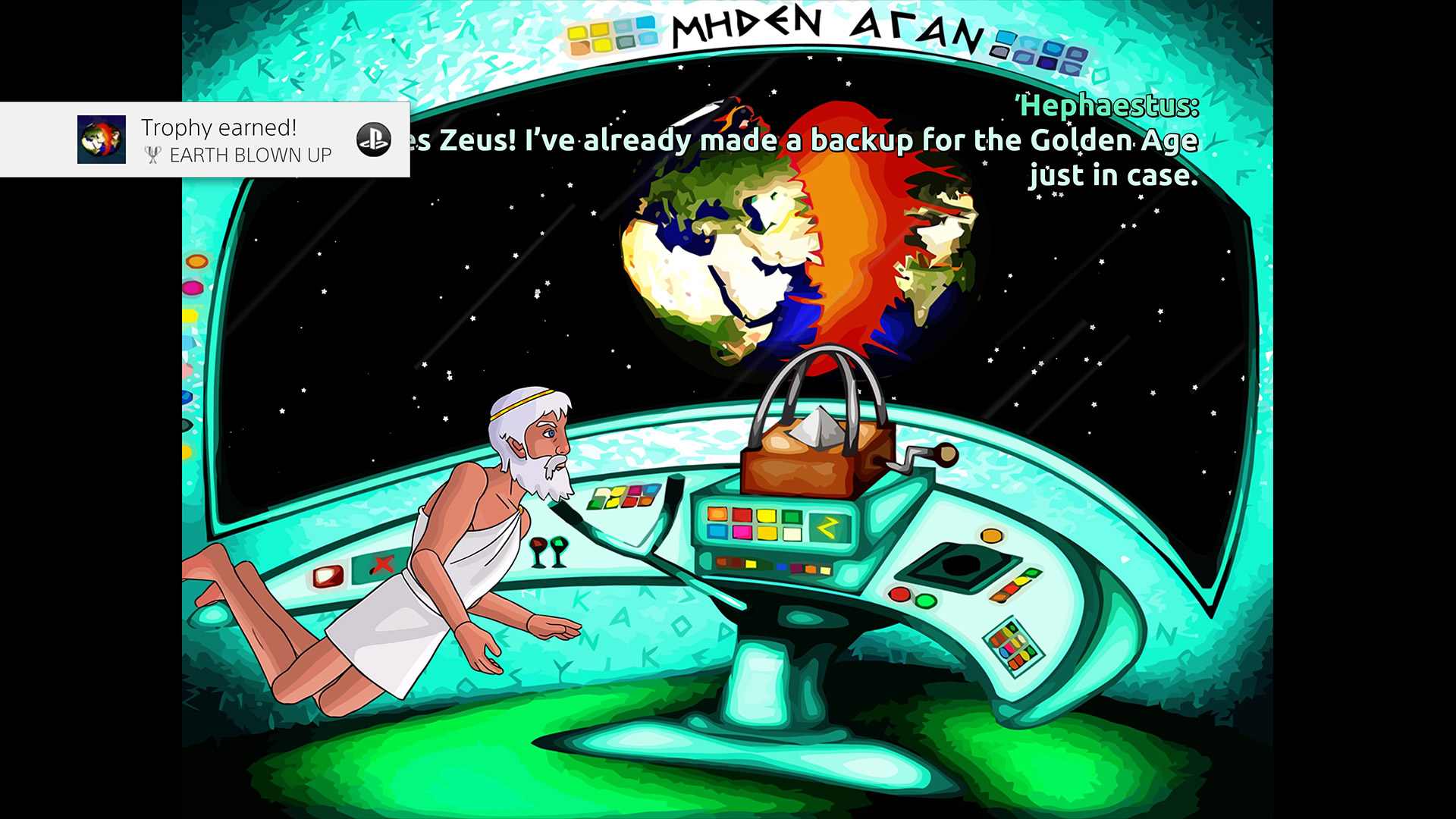 Graphically it’s not going to win any awards, but there is a certain charm to Zeus Quest Remastered, it’s almost abstract in the way the backgrounds are portrayed whilst the characters have a blurred unique look to them. Musically Zeus Quest Remastered has pleasant background music which fits in smoothly with the scenes you need to move through. You collect points that add up in the corner of the screen, it’s never explained why you’re collecting points or how they are of any use. Dialogue is funny, there are plenty of hilarious one liners or observations. One majorly annoying issue within Zeus Quest Remastered is the amount of game affecting bugs. For some reason (mostly after cut scenes) you won’t be able to move to another scene or use an object that would take you to the next part of the story, usually you have to quit then reload the game and that sorted the issue. However there were a couple of bugs that appeared which meant you had to replay Zeus Quest Remastered from the beginning. One happened just before the end Zeus Quest Remastered, you’re literally five minutes away from completing the game and this bug meant you couldn’t proceed because an item that should be present isn’t! Even after reloading it isn’t there, as you only have one save you are then forced to replay the entire game! For the Platinum hunters out there, Zeus Quest Remastered can be platinumed in about an hour.

Zeus Quest Remastered is a funny game with charming graphics. Unfortunately the game ending bugs and lack of detail of what you need to do make the experience nowhere near as involving as it should have been. Hopefully future patches can cure the bugs, if they do then you have a reasonably interesting title on your hands. Until then Zeus Quest Remastered will only appeal to the die hard point & click adventurers out there who enjoy having to reload their games so they can hopefully reach the conclusion of Zeus’s quest!

You’re Zeus and you’ve forgotten you’re Zeus…… Let’s see if anyone will recognise you before it’s too late!