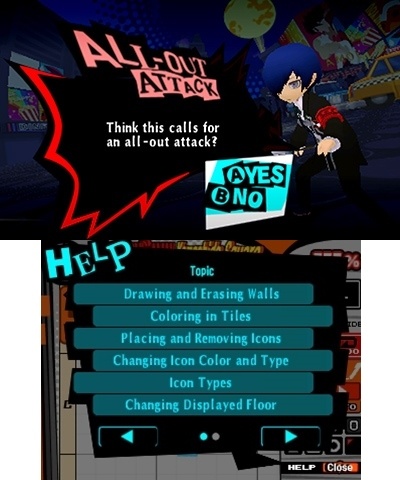 I want to say that this is it, that Persona Q2 is the last major release for the 3DS, but honestly, I’ve given up on that. It feels like I’ve been saying that for years now, and new games, well, they just keep on coming. And good games too…..very good games. This isn’t shovelware, the kind of game you expect to find cluttering shelves at the very tail end of a handhelds lifecycle, this is top-tier, triple-A stuff. Sure, it might not have the scope or the overriding excellence of a mainline Persona release, but Persona Q2, like its predecessor, is still a top quality spin-off, one that takes much of what is great about the Persona series and applies it to the brilliant Etrian Odyssey template to create a game that successfully blends together two of the finest JRPG series out there. Yes, I’m sure Nintendo fans would prefer to see Persona 5 ported to Switch (come on Atlus, sort it out), but if this is to be Joker’s only non-Smash Bros. related appearance on a Nintendo platform, it’s still a largely successful one.

Well, it will be for most anyway. As great as the Etrian Odyssey template might be, it certainly won’t be for everyone, and for those more accustomed to Persona’s more contemporary approach, Persona Q2’s throwback and ultimately more old school gameplay might ultimately prove a hurdle to overcome. But overcome it you should as, even if you are more of a Persona than a Etrian Odyssey fan, this more dungeon-centric style of gameplay has rarely been done better. The mechanics are still at the whim of the structure of course, and honestly, it doesn’t do anything particularly new to push the genre forward, but what it does do, it tends to do very well, and as always, Atlus’ fantastic character work and unmatched sense of style invariably elevate this above the largely competent but often comparatively poorly written competition. 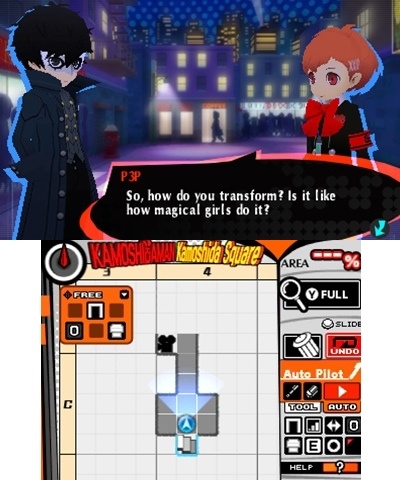 Saying that, while the gameplay is certainly all Etrian Odyssey, fans of Persona will be pleased to know that, in terms of story, characters, style and narrative, this is pure Persona. Etrian Odyseey has always been more focussed on mechanics than narrative (which is all but non-existent in the world of Etrian Odyssey), so even with Persona totally owning the experience from a storytelling perspective, it doesn’t feel like the Etrian Odyssey….(ness?) of Persona Q2 is being pushed aside in favour of the more popular and better known Persona series.

While leaning heavily on Persona 5 and Joker in particular, Persona Q2 includes characters from Persona 3 and 4 and certainly isn’t shy when it comes to fan service. Sadly, due to its more light-hearted tone, simplified narrative and lack of classic Persona-style social interactions, Persona Q2 fails to make the most of having all of these characters in one place. Sure, it’s cool to see these beloved characters sharing the same game, and heck, just more Persona is always a good thing, but like its predecessor, it’s hard to shake the feeling that, from a storytelling perspective at least, this is a bit of a missed opportunity. That’s not to say that the writing is actively bad or anything, it’s just that, well, this is Persona we are talking about here, a series that is always held to the very highest of storytelling standards.

Luckily, while the storytelling and dialogue does fall a tad short of expectations, the gameplay, while lacking some of the features that make Etrian Odyssey so great, is still largely fantastic. It keeps very much to the Etrian Odyssey template with Persona’s added in to mix things up and, for the most part, it all works very nicely. As per Etrian Odyssey tradition, it’s played from a first-person perspective with players given the ability to create their own dungeons. That might sound a bit much to some, but you can leave most of it to the game itself if you’re not all that keen and just want to get down to battling. 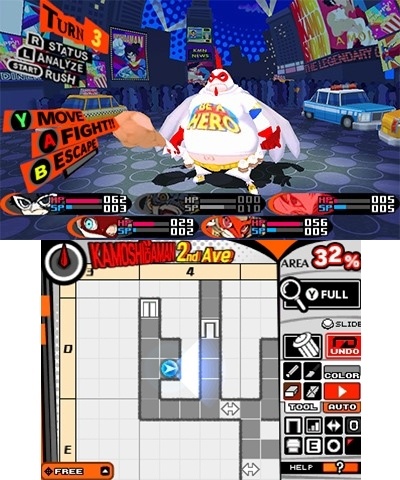 The battle system itself is as balanced and nuanced as ever and the addition of your characters’ Persona’s and their unique abilities certainly work within the Etrian Odyssey-style structure. Some will bemoan the slight dumbing down of the previous games’ puzzles and the lack of a skill tree remains a shame, but at its core, this is still a fantastically polished dungeon crawler, one that successfully merges two largely disparate series to create something that captures the spirit of both without diluting the essence of either.

Despite its simplified storytelling, potentially divisive change to the tone and relative lack of challenge (beyond a handful of rather nasty difficulty spikes that is), thanks to its great cast of characters, inspired cinema setting (many of the dungeons are loosely based on movies), and its largely great use of both Persona and Etrian Odyssey tropes, like its predecessor, Persona Q2 stands as one of the more successful video game mash-ups out there. It’s not without its faults, and fans of traditional Persona-style gameplay might need some convincing, but as an introduction to the dungeon crawling genre, and to a series that has never achieved the kind of success that its quality has so often deserved in the West, Persona Q2 has to be seen as a major success.

Persona Q2 stands as one of the more successful video game mash-ups out there.