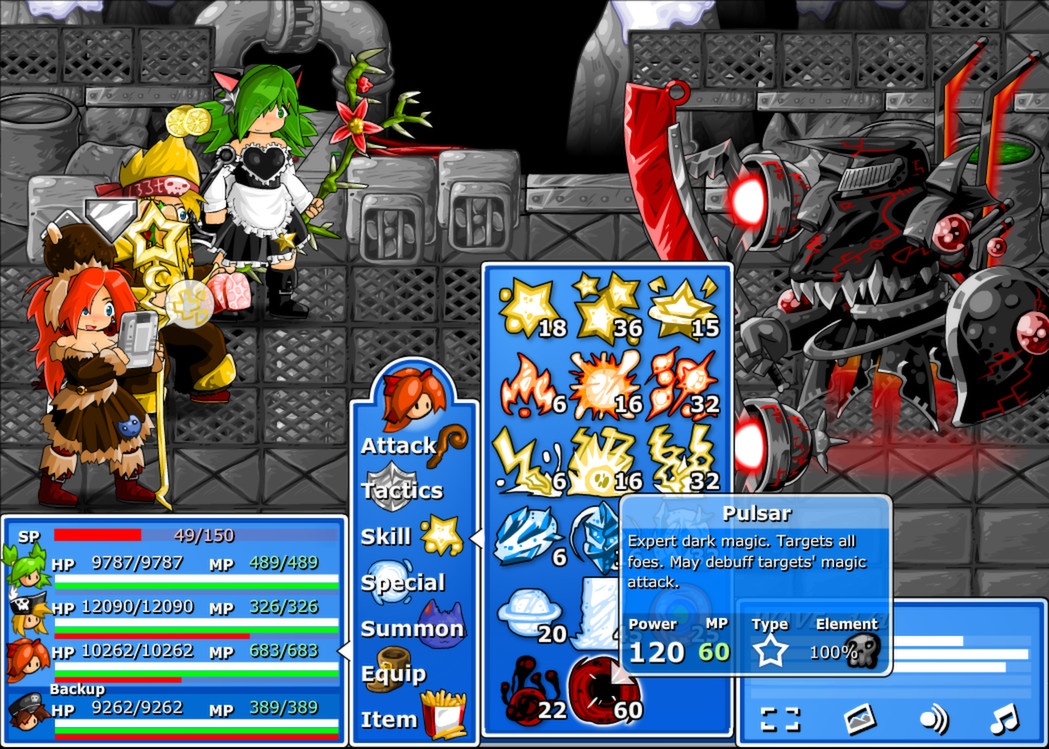 When Flash games are popular enough to end up been greenlit on steam, you know it has a huge fan base. Epic Battle Fantasy 4 is no exception, the 4th game in a series of flash free to play games. Although the 3rd and 4th were the first games to make it a true RPG adventure. Been able to negotiate different areas, instead of just wave after wave of battles. If you want to play those before this one, they are free to play. It’s not a requirement to get the full enjoyment out of this latest instalment.

The story of the latest instalment continues the third game. Matt, Natalie and Lance have saved the world and are broke. So they resort to looting defenceless villagers in order to eat and survive. So it would seem saving the world doesn’t make you loaded which is an irony in itself. When the crystal of greenwood village is stolen a new playable character called Anna suspects Matt and his gang of being the culprits. Later in the game it becomes apparent to her they didn’t steal the crystal. The party does eventually encounter a ghost cat that makes the intentions known to the party. To revive “God cat” and make cats reign over the earth by collecting all 3 crystals.

As you might have guessed, EBF4 doesn’t take itself seriously at all. You can find various parodies of other RPG games, they are very obvious. it’s pretty amusing to see a lesser game poke fun at the games that have sold millions. You will find yourself wanting to explore more than anything looting chests feels really rewarding as you might get new equipment you’re not meant to have at that stage in the game, giving you a nice advantage. This is really essential, if you decide to play on one of the games harder difficulties. The game has 4 difficulties, let me tell you, the game is pretty tough on normal so if you are looking for a challenge you will most certainly get one here.

Epic Battle Fantasy 4 is as fun as it is humorous. The characters all have a distinct personality and let it shine throughout your adventure. Often they will come out with a witty remark that will make you chuckle to yourself. The games Anime graphics look pretty good considering this was originally a flash game. They are very clear vibrant and each area looks and feels different thanks to the variation of enemies and backdrops. Inspired from the classic 16-bit era. 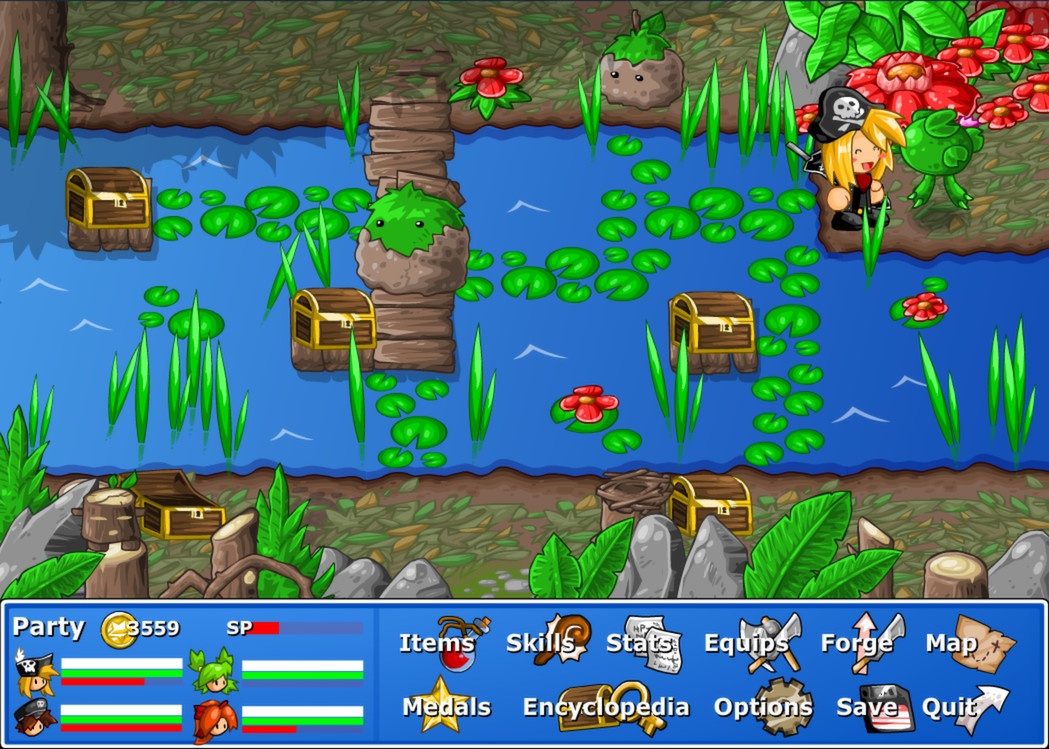 The battle system is your everyday standard RPG battle system. You have a party of three characters each been able to make one action each turn all your characters have their turn before it switches to the enemy’s side. When it comes to the later enemies or bosses, it’s really not that simple. You need a game plan, a strategy otherwise you will lose. I have never had a first boss test me as much as this one did, seventh attempt he finally went down. This continued throughout the game and I constantly found myself been tested by bosses, halting my progress.

As you progress through the game you obtain all new pets and unique summons to help you, ranging from attack to support, the animations to these are amazing. I never get sick of seeing the same over the top attacks as they are unleashed on your enemy again and again. The music is just one word, awesome. The fact the soundtrack is thrown in the steam version for free is reason enough alone to buy it.

You travel around the world on a Zelda tile world map like structure. The screen scrolls across as you move to the next area in a very old school fashion. You can also choose which character you want to control on the world map. You will often find yourself backtracking to unlock new loot which was previously inaccessible. Again this will make your life a lot easier gaining new weapons and armours sooner than your meant too, depending how much you have levelled up your current equipment of course.

Equipping new equipment changes your character look, if you find a look that suits you. You can upgrade your characters current equipment with items so you can keep, it over other new equipment. Upgrading skills is done with AP points which are obtained by defeating enemies and winning battles. 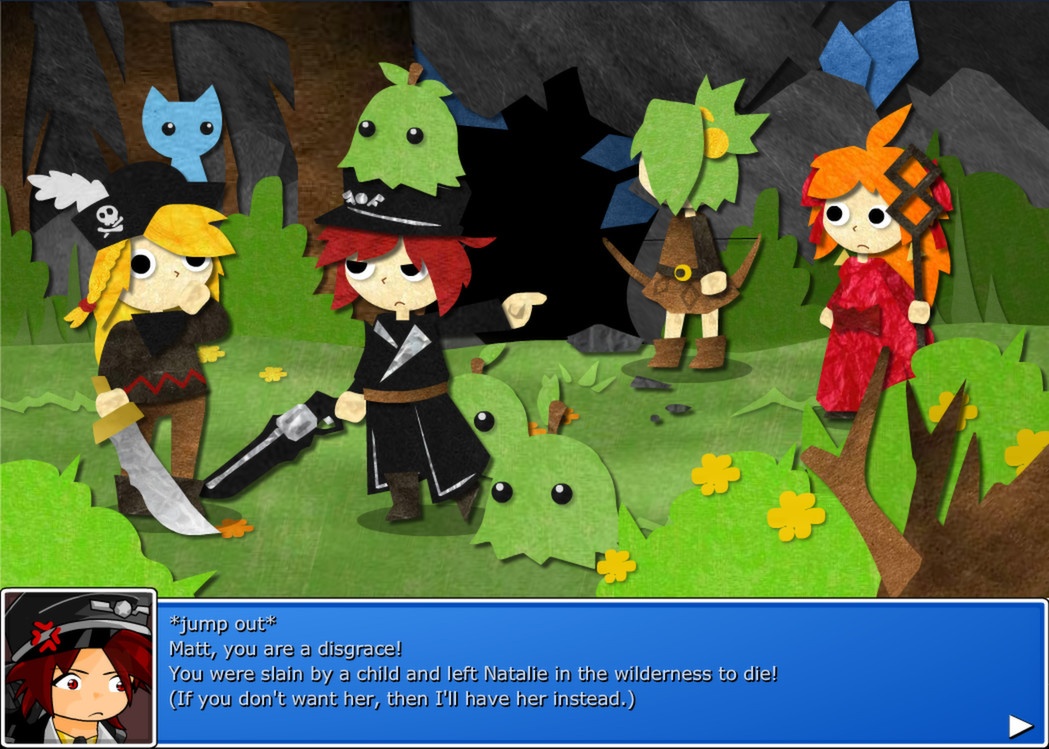 Epic Battle Fantasy 4 is a light-hearted turn based RPG that old school and present RPG fans will love. With new features added exclusively for the steam edition. The game took me 24 hours to complete, you have the added bonus of New game+, survival and boss rush modes. Epic Battle Fantasy 4 is Suitable for both casual and hardcore gamers a like, personally I think everyone would warm to the hilarious anime charm and I highly recommended giving the series a look at. The only disappointment is the game isn’t in true HD and in full screen the game looks stretched but this is a slight blemish.