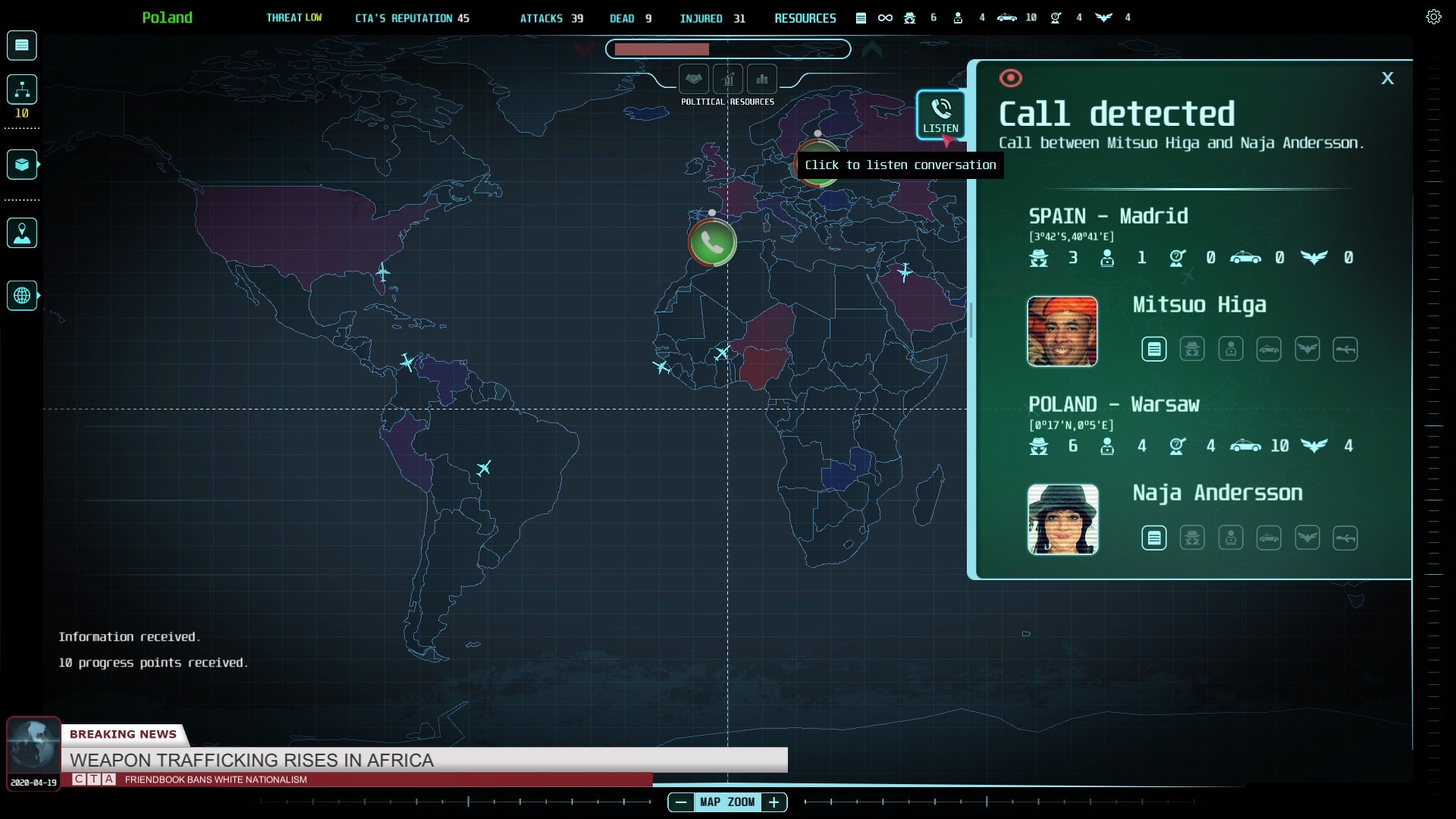 Simulation games are an interesting genre. They lack the active qualities of layered RPGs, yet they still maintain the right amount of intrigue to draw us into the game. Most of the games I’ve played in the past had you directly take control of the action, but sometimes I like a change of pace. This game presents the perspective of the central command ops centre instead of the field agent chasing down bad guys and disarming bombs.

The Counter Terrorist Agency builds off of the idea that you are in command of all the operatives worldwide to stop terrible things from happening. Events such as terrorist attacks, bomb threats, chemical attacks, and even coups are random and present a separate challenge each time you progress through the game. Hang onto your seat, because you’ll be glued to the management you’ll be dealing with.

Starting up the game, it brought me to a menu of three different options: new game, continue or new game. The choice was obvious, so I started a fresh new game to see what kind of trouble I could get into. The interface is a basic layout of options, but I was guided the entire time by a tutorial. It would show me basic functions as to how to monitor terrorist activity, specifically how to wiretap a suspect’s phone call. Or how to intercept their emails, but that will come into play later.

Besides the basic actions I could do the tutorial, it went through the rest of the basics, such as highlighting the reputation of each country I was operating in, how to upgrade the different abilities the agency was given, and last, it explained the important role of lobbying for support in different countries and how it was based on the reputation this CTA (Counter Terrorist Agency). Every action that I could do was judged within each country, either upping my overall reputation with them or severely hurting them. If I failed a country’s expectation; or failed a sting operation, they had no problem with cutting off funding to me.

The main aim of the entire game is to get as many resources as you can from each country and intervene on any type of terrorist activity. For one example, I intercepted a call between two different characters. Let’s call them Bob and Jim(the game auto generates character names). Bob and Jim would have a casual phone call, but the CTA would intercept it if they had any keywords. The first action I could do was wiretap their phone call. 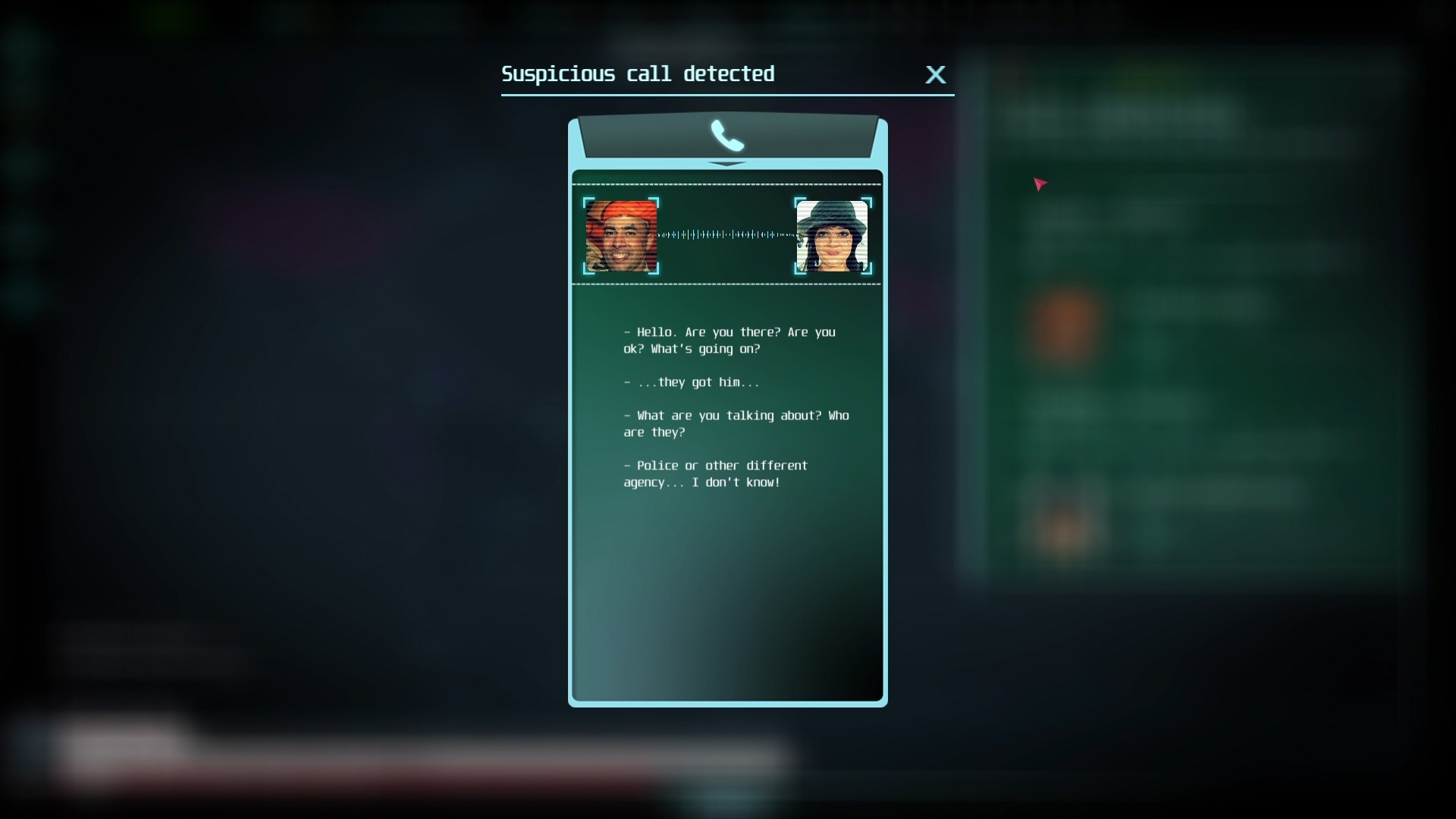 A small screen would pop up and show the conversation between Bob and Jim. For common knowledge, I was encouraged to monitor suspicious keywords or phrases that will raise a red flag to any terrorist threat. In this situation, Bob told Jim exactly where to meet up for an attack at X building, along with what time they would execute their plan. In this case, it was obvious Bob and Jim were conspiring to plan an attack, so I could dispatch a police car to intervene. Arresting suspects is one option that I could do with my resources, but I will go into detail about the other actions later in this review.

Another scenario could have played out where the Bob and Jim characters were talking about how to get a new team together for their business meeting, but if not studied correctly, I could have mistaken it for another terrorist attack. The key to identifying a threat or not was the wording or the tonal level of each character’s speech. If they appeared aggravated, it was a small clue that they were planning to do something huge against a country. If not intercepted in time, it could lead to losing resources or a plummeting reputation.

I will revisit the other actions of intervening terrorist attacks. The first action I was given was the ability to send a police team to arrest them. Two different outcomes could come out of this. If I had enough evidence to prove each person talking on the phone tap that I set up was hostile, it was a successful arrest and I would move on. If I was unsuccessful because of a lack of evidence, they were released immediately and were more difficult to capture. My options would be narrowed down to killing them with a swat team or later using a drone strike to get them(I would have to unlock this).

After sending a police team to intercept terrorists, the other options were based on how many skills I unlocked. One option, besides phone tapping and sending cops to arrest them, was sending a SWAT team to take them down. This was a lethal option and though it would end the existence of a possible terrorist cell member, it could also have the adverse effect of lowering the reputation of the country they were discovered in. Another option was hacking them, which would definitively identify what role the person played in the terrorist cell or if they were even part of one to begin with. There is another dynamic of the role system I will talk about a little later. The last option, as mentioned earlier, was a drone strike I unlocked later through successful missions. This is another lethal option, but it has a higher and more precise success rate than the SWAT team or police arrest. Both options can be upgraded later with points won through successful missions.

The role aspect of the Counter Terrorist Agency is interesting. When you log information on any person you’re wiretapping, you are given the choice to assign them a role. There will be a sub menu that pops up, displaying what each role is in the terrorist cell group. There is the Leader, Member, Soldier, Finance Manager, Operations Manager, Suspicious, and not a threat. Soldiers are an aggressive role and are used to carry out attacks. Finance managers handle the money of the terrorist network. Operations Managers are handlers for field operatives carrying out attacks, but are not a secondary leader role. The Finance manager funds each operation (which can also be intercepted through dialogue in wiretapping.) Last, the Leader of the group is the one who inspires the members and is the big fish to go after if you want to successfully dismantle a terrorist network. 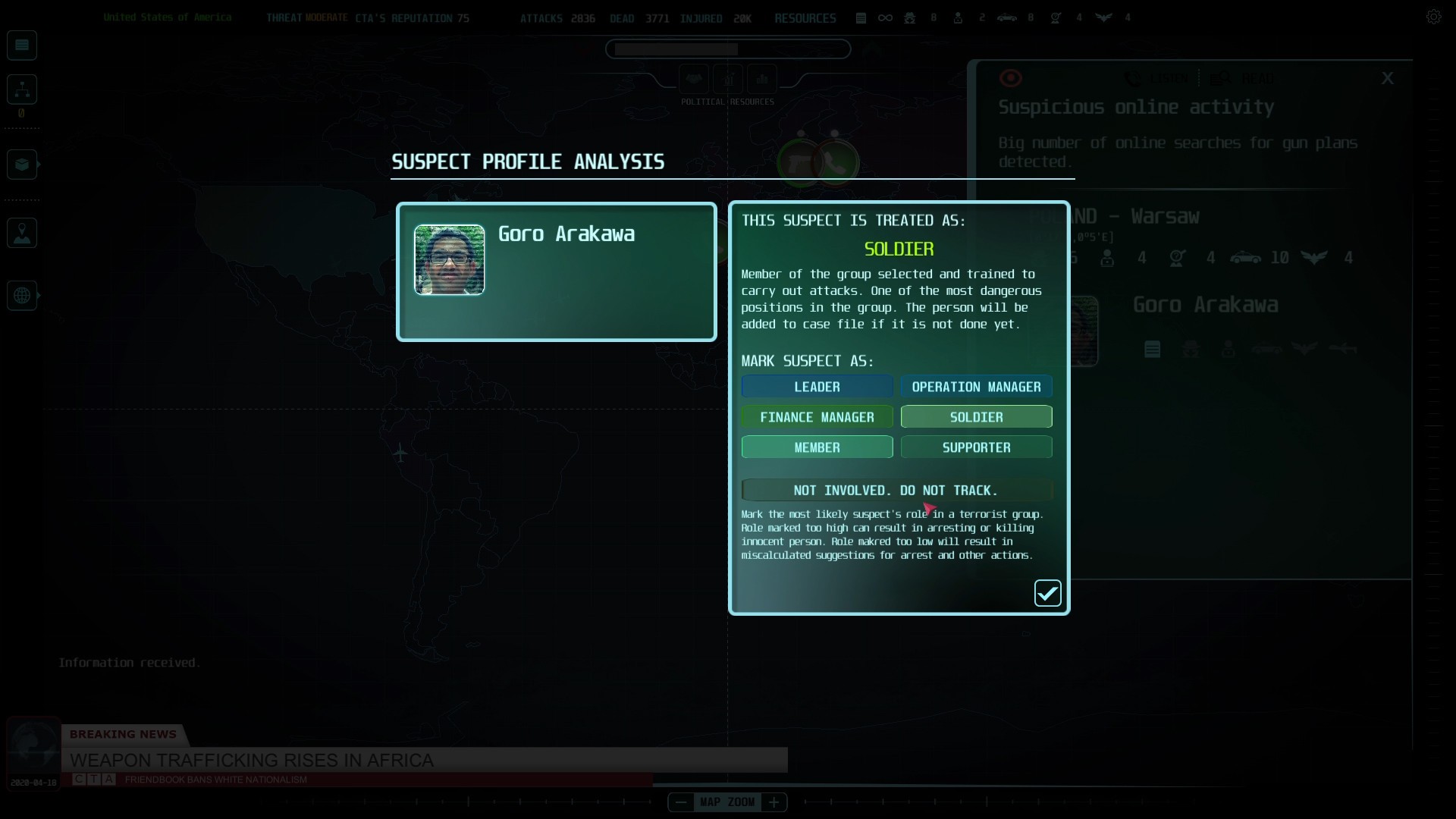 Another passive function the CTA would run is analysing all of your case files you profiled. If you were correct in identifying what role each suspect was in their organization, you would gain points to use to unlock upgrades for your CTA. Over time, I learned it was in my best interest to mark someone as suspicious if I had at least one piece of information linking them to a terrorist attack or organization. This is the basic level profile, with a more detailed role awarding more points for upgrades or other counter terrorist actions.

Compared to other simulation games such as Fallout Shelter or X-Com, Counter Terrorist Agency held its own in this genre. For a game that was simplified to one interactive map screen, it was a lot of fun. I believe what kept my interest the most was the way the developers used each intricate action used by the CTA to prevent a terrorist attack or suspect. This gave a lot of weight to my own actions, and though everything I did was for safety, I didn’t expect to get negative public relations with a country if I intervened too much.

My only complaints about this game was the learning curve to understand how each action works and that it wasn’t detailed when executing certain actions. I think it would be interesting if developers put in a future expansion or sequel after sending a SWAT team to stop a suspect, they show dots converging on a spot on the map to show exactly what is happening, and using any power ups you unlocked to increase the success rate of capture.

I would recommend this game to fans of simulation games that want to try something different. Once you get through the first couple of cases, it will be easy to pick up and play for a while, then you can come back and revisit later. For the price that this game is going, I wouldn’t recommend buying it right away, but you can add it on a Steam wish list and take advantage of the amazing deals they run with different seasons.

In the field, you’re dealing with dodging bullets, disarming bombs, and going on wild car chases. Back at headquarters, who do you think put you in that situation in the first place? Enter Counter Terrorist Agency.