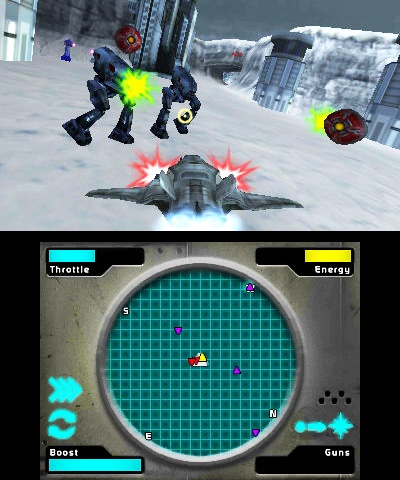 Thorium Wars is an action shooter flight simulator for the 3DS. With 8 missions, 3 ships and a plethora of enemies for you to shoot out of the sky, this is a fun little addition to your catalogue of 3DS games, even if there are various ways in which it could be improved.

This is a very plot heavy game, which is okay as long as you don’t mind reading up to six pages of exposition before you play each mission. Normally this would be a big weakness, however these exposition dumps are written in the style of a mission report, which adds to the facade of you actually taking flight to take on missions. The story takes place a generation after Humanity won a war against the Thorions, who are an army of robots essentially.  The Thorions return with a vengeance in order to wipe out Humanity and conquer to galaxy. This is where you come in, a pilot tasked with key missions in order to win the war and save the galaxy.  The levels reflect the impending threat, growing in scale each time leading to a big climax. As you progress through the levels you also unlock extra content in the gallery, providing details of enemies and different ships. It’s a nice touch for those who enjoy immersing themselves in a game’s universe, and it shows the extra level of care taken by the developers. 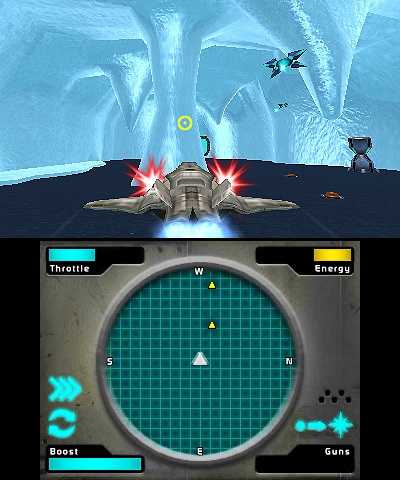 I have mixed feelings about the style of the game. On one hand I like the retro Nintendo DS style graphics, which remind me of the 2007 transformers games released for the DS.  However, the game isn’t the most aesthetically pleasing, having a very bland colour palate; consisting mostly of greys, blacks and blues. The levels are also a split in terms of design, with the worst levels being those where your ability to fly high is restricted by a force field. However some of the bigger maps are well thought out and are a delight to replay. The mini map on the bottom screen could do with an upgrade, as currently it only shows direction and a dot of your next objective without any layout of the map. This led to me getting lost multiple times, which just became frustrating. Some of the Thorion designs are pretty bland, and others have obviously taken inspiration from pop culture, such as the Hobgoblin Biped which is basically an AT-ST from Star Wars. The music isn’t anything to write home about, but does okay in creating the feel of a star shooter game.

The gameplay is fun, however could be made even better with a few improvements. The most important thing about the game is the flight and shooting, both of which it manages just fine with the three different skyfighters offering a different experience for levels. These ships consist of: the Utu Skyfighter (medium everything), the Indra Skyfighter (a heavy class ship that sacrifices speed for strength), and the Shango Skyfighter (a speedy lightweight cruiser.) The real fun comes in using a ship for a mission opposite to the game’s suggestion, adding another layer of difficulty if you want to go beyond the games traditional easy, normal and hard modes. During flight, you have the ability to move in all directions, dodge projectiles, shoot your cannons and change between the gun type (heavy and light blasters). The aiming is easy to get a handle on, however sometimes you may find yourself in a small space trying to turn around to hit an enemy but they are always underneath you making it basically impossible.  To change this I would implement a quick turn mechanic so you aren’t caught in a constant loop. 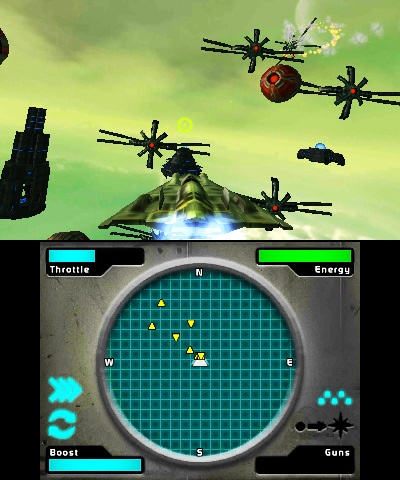 Even though there are many ways this game could improve, Thorium Wars: Attack of the Skyflighter is a fun addition to your game collection. Hopefully in the future an updated version can be released expanding upon the fun gameplay and interesting story.

Thorium Wars: Attack of the Skyflighter is a fun addition to your 3DS game collection.