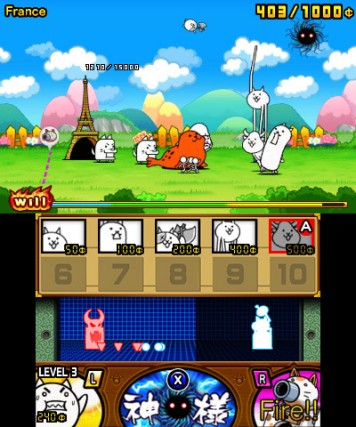 I honestly don’t know why I’m still playing this game. It’s a tower defence game. We’ve probably all played one at some point or another. One tower on either side of the screen, you select which troops you want to use, send them in to battle the enemy and destroy the opposing tower. Really simple stuff, that definitely should not suck out hours and hours of my life. Yet I’m still playing it. Even as I write this review, I have one hand on my 3DS, frantically tapping the buttons to send my army into battle, which, by the way, consists entirely of different cats.

There doesn’t seem to be a story. The intro poked fun at itself for a while, then set me on my way to take over the world. Each level starts with ‘Worker Cat’ at level one. Worker Cat provides you with a stream of money to spend on your cat troopers, and can be upgraded by spending this money on him. I was given two cats to use; Basic Cat and Tank Cat. I sent them in against the enemy, who, in turn, sent in a bunch of basic dogs (surprise surprise) to come and smash my tower. It was easy, and I won. This happened for a few stages, the enemy started sending in other troops like snakes, a bunch of stick-men and a hippo. It was all pretty standard stuff, until I got to the rare capsules. 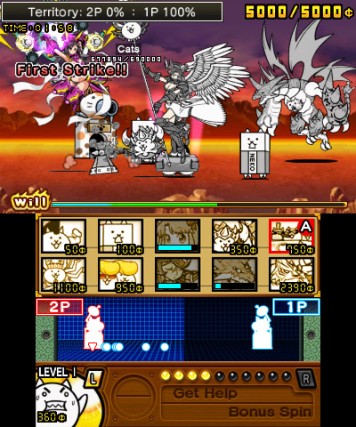 Initially, the game doesn’t require you to think very tactically. I was using the same cats for each stage, and pretty much getting away with it. Alongside cat food (the game’s currency), experience is gained after completing a level which allows you level up your cats. Once a cat reaches level ten, it transforms into a more powerful version. For example, Basic Cat becomes Macho Cat (it gets big muscular arms). After a while, the game starts throwing more and more powerful enemies at your tower, which will require you to either upgrade your cats further, or get better cats by opening rare capsules.

After about five or six stages, I unlocked the ‘Rare’ option in the menu. After a brief explanation, I was allowed to open rare capsules, which contained a random cat for me to use. I opened up three, using the rare tickets and cat food I had earned at the end of each stage, and fell instantly in love with my new troops. This is where the game gets you hooked. My first three were Bodhi Cat (a zen-like cat floating on a cloud), Swordscat (a little cat with a sword) and Cat Mecha (a cat in a huge suit of mech-armour). As expected, each of these cats have different attack and defence properties, have different costs to use them, and I immediately wanted more of them.

Upon first glance, it seems like The Battle Cats POP! is using a common ploy used by most ‘free to play’ games you can find on the internet. Each stage requires energy to play it, which you are given at the rate of one per minute, but you can choose to buy more if you want to play again sooner. The cats in the rare capsules are given to you randomly, and you can buy more if you want. This really annoyed me, until I realised that there was no option to spend real world money for these things. The only thing The Battle Cats POP! wants for more energy or capsules is cat food (the currency I mentioned earlier), which you get by completing stages. It’s refreshing to see that The Battle Cats POP! only wants you to play the game to unlock the best stuff, which is probably why I’m still hooked. 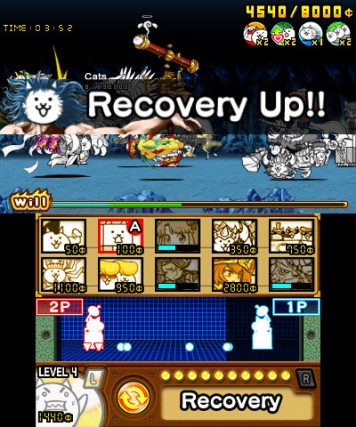 Most of the appeal lies in the visual presentation. The troops on both teams look like cutesy two-dimensional doodles and even the enemies ooze buckets of charm. As I write this, I have access to about fifty cats, and every single one seems unique, and most importantly, brings a little smile to my face when I send it into battle. The animations on each unit, although fairly basic, are just fantastic. To see Bondage Cat wriggle up to an enemy tower, tied up in ropes and sweating profusely, and proceed to attack with the ball-and-chain attached to his feet never gets old. The sound design, while limited, does a well enough job. It would have been nice if each of the unique looking cats were accompanied by some sort of unique sound, but that was sadly not the case. The music, while upbeat and catchy, can get extremely repetitive, which is a little annoying if you are planning to play for extensive periods of time. Surprisingly, I didn’t hear a single meow in the whole game, which is odd, all things considering.

As you can probably tell, I love this game. It’s pick-up-and-play fun that appeals to all ages, but still manages to throw in enough tongue-in-cheek humour for those old enough to understand it. Collecting the cats is extremely addictive, yet requires time and effort to do so. The levels increase in difficulty (albeit slowly), and each stage offers additional rewards to collect, which in turn, will boost things like Worker Cat efficiency (faster money) and base health. Collecting experience to upgrade your army offers additional incentive to replay stages, and seeing what Ninja Cat transforms into (Frog-Ninja Cat, if you were wondering), alongside all the others, is always interesting and fun. It also offers a multiplayer mode, which I was unable to play due to lack of opponents, and it wasn’t very clear on if this was online, or local only. However, at the end of the day, it is just a tower defence game. And while I am extremely entertained by it, it won’t appeal to everyone. It could also make slightly better use of the 3D capabilities of the 3DS, but at least it tried, unlike other games on the system that choose to ignore the feature entirely. The Battle Cats POP! is a great game to whittle away some (or most) of your time.