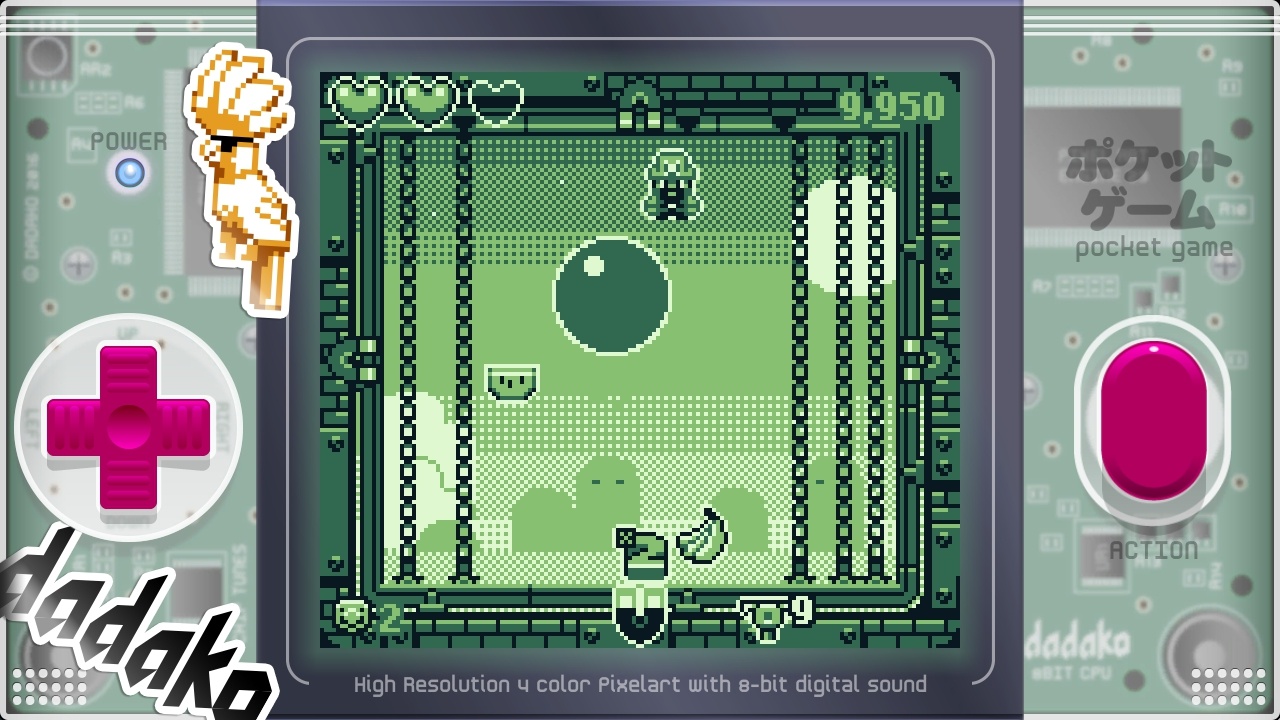 I do really enjoy unapologetically simple games. No, I truly do. I think there are some folk out there who expect a title to be more than what it is, and that’s dreadfully unfair. Take, for example, Downwell: when you dissect that game, you fall and shoot. That’s it. Sometimes you shoot more or less, sometimes you fall further, but, at the core, that’s the damn game. So Pirate Pop Plus might catch a little flak in the community for being so simple and basic, but, hey, if it works, don’t knock it. And Pirate Pop Plus truly works.

There’s this story that exists about a big, mean pirate, named Bubble Pirate, who traps other pirates in bubbles, but this story is meant to be as relevant as someone kidnapping two bothers’ girlfriends and then turning them into dinosaurs. Yea, turns out Bubble Bobble is a wild tale that really doesn’t matter a bit once you get into the game, that’s also the case here. I’d like to point out that, after the first startup of the game, you don’t even see the short cutscene of why the game is established again, so even the developers, 13AM, know that it’s not really an important thing. 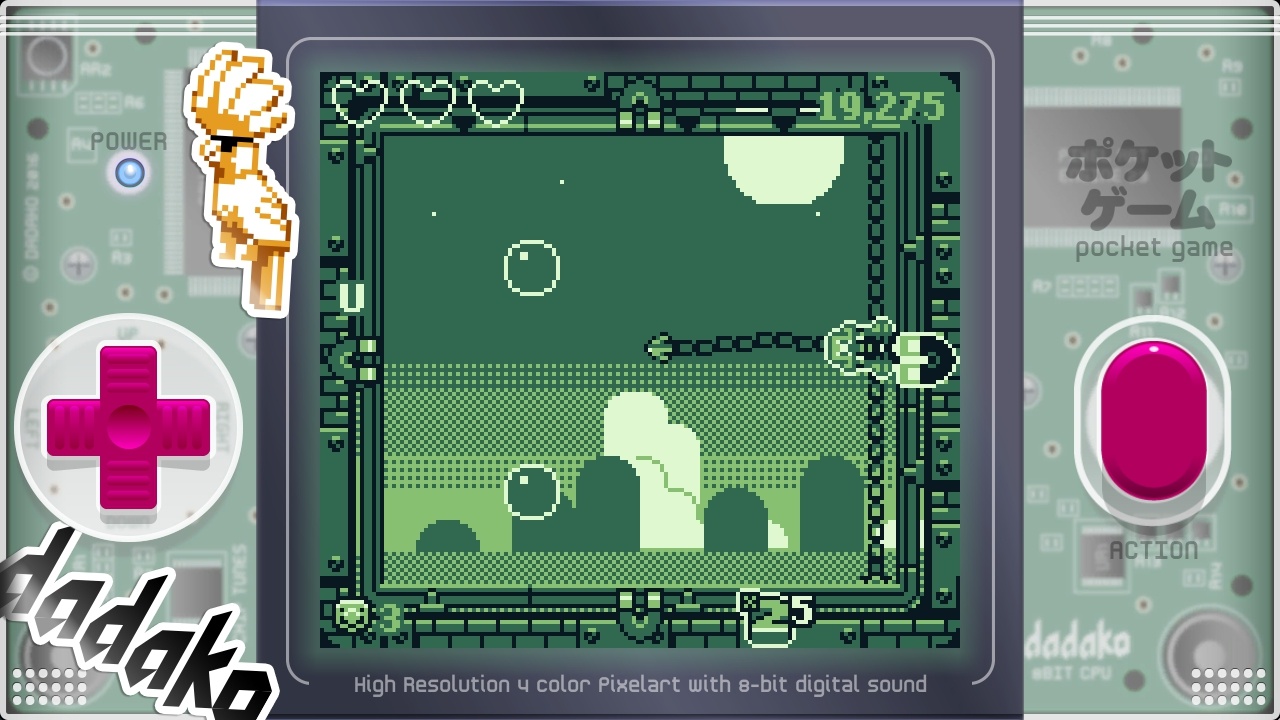 The gameplay itself is ridiculously simple. You, the pirate, stand at the bottom of the screen and can move left and right and fire a single anchor on a chain. Bubble Pirate appears and shoots out a single, giant bubble, which you need to pop. When you do, it turns into two smaller bubbles, which, when shot, turn into two even smaller bubbles. Pop these all to not die. Hit them without missing a shot to continue a chain reaction of a high score, and get hit three times by bubbles to fail. On the surface, pretty simple, and really retro in concept. This is one of those games, at first, that you’d imagine to see in a handheld deal from the early 90s. Hell, Pirate Pop Plus is even keenly aware of this with the display and presentation. NOTE: even though the screen has a D pad and a fire button, there are no touch controls for this game. They would probably not be great for this game anyways, but don’t make the same mistake I did and lose because you kept touching not-controls.

But, if you get the game going for a while (like a couple of minutes or so), you get to see the complexity of the game unfold. Bubble Pirate will re-appear to shoot more bubbles, sure, but he also re-appears to change gravity and reposition the game. Suddenly you’re on the wall or ceiling, and the directions you’re moving change accordingly. If you manage to hit a bubble in free fall, you can do a bounce combo off the bubbles to get a higher score, and that’s just the start of it. Some bubbles drop food for points, but others drop coins (to be used later) and power ups, like shields, time-freezes and even laser guns. The randomization of what drops is really a thrill, and you can quickly get locked into a long form game because you’re on a great tear in the flow of things. 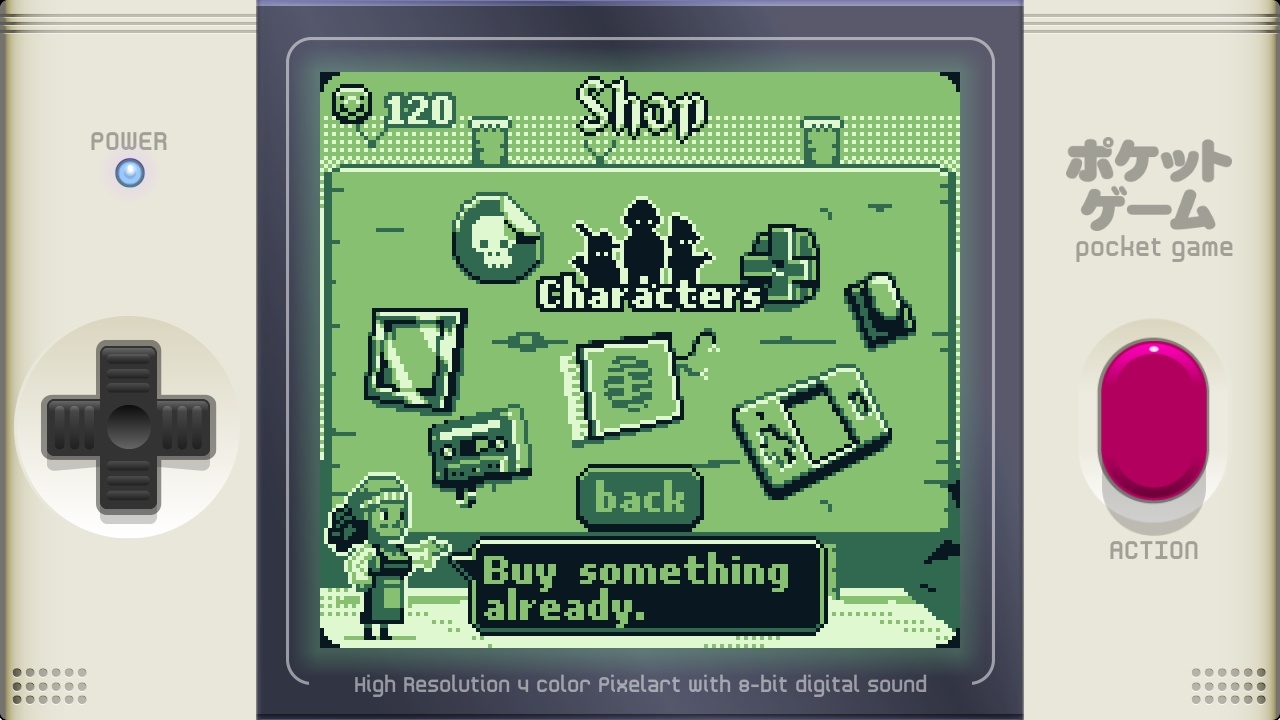 The replay incentive of Pirate Pop Plus comes from how much you’re immediately caught by the core gameplay. If you seriously don’t like the idea of what you’re doing, I don’t think any amount of tooling around is going to change it for you. The game gets damn hard, because the bubbles don’t go away unless you pop them, and healing items are incredibly few and far between, asking you to stick to old school arcade rules for your high score. The coins can unlock a couple of different characters with faster shot speed or quicker movements, but you won’t miraculously unlock an adventure mode or RPG quest. You can, however, get some different cosmetic changes that I personally feel made the gameplay better. No, not the awesome decals that represent 13AM’s other well-known title, Runbow (coming soon to Switch!), but I mean the frame and backlight change. The original hue of things is perfectly good, but I felt that a darker frame around the game,combined with a different tint to the backlight (red, especially) made certain elements pop better and earnestly resulted in a higher score. That’s what’s great about these types of retro games: people really did thrive under different conditions, partially because they liked them and partially because they responded better. Flying Tiger understands this a bit with their arcade series, and 13AM definitely gets this with their Pirate Pop Plus customization. My only complaint is that you usually can get like ten coins, max, in your average run, with a lot more if you care super skilled and lucky. The result is that completionists will have a LOT of play on their hands before they can unlock all the snazzy buttons, different music tracks (which are simply awesome, sidenote) and even customized D pads that, again, do nothing.

I think Pirate Pop Plus isn’t getting a ton of attention on the Switch, as it also didn’t get a ton on Steam, but those who bother to actually take a look and try the game will be pleasantly surprised by it. No, it’s not going to dethrone Breath of the Wild, but this is a fantastic “I got a few minutes” type game. You can pick up and play easily, it’s fun and charismatic, and it’s a reasonable price for the sheer amount of replay value. Casual gamers should put this high on their wish list, and even more “hardcore” folk should consider taking a serious look at Pirate Pop Plus.