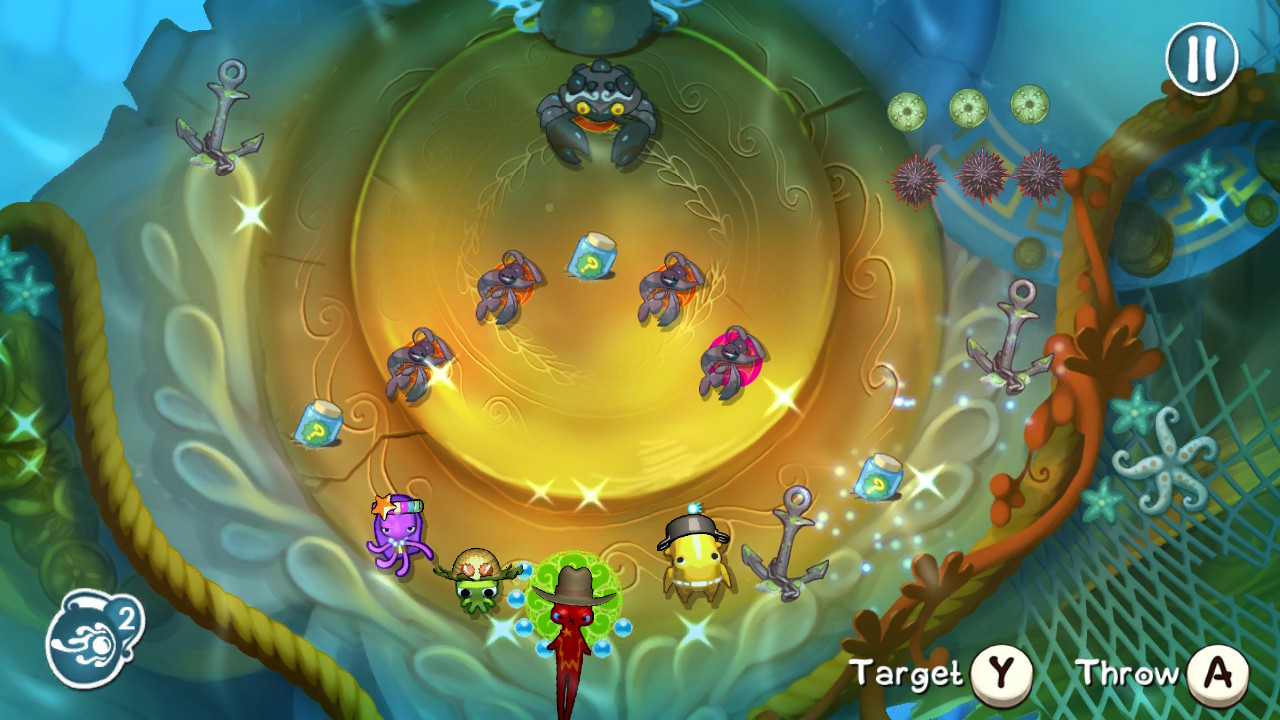 In an ever-increasing market of video game genres and the mechanics within them, it often takes something very special or unique to make them stand out from the crowd, or produce a game that contains such a freshness in its elements, that it feels new with its mechanics of gameplay. This can be achieved in a number of ways, such as creativity, invention or by combining two styles of genre into a completely new game. Squids Odyssey from The Game Bakers and Flyhigh Works, is one such title. Originally released on the Wii U and iOS, this new port of the game is now swimming onto the shores of the Nintendo Switch, as well as releasing onto the 3DS, boasting a definitive version that contains all of the previously released additional content from all platforms.

The story follows the exploits of Steev, a squid, who along with his friends, is tasked with combatting the spread of a mysterious ooze that is corrupting their underwater world, along with the wildlife that inhabits within. Set over eight different stories with a level count of over ninety missions, you need to battle your way through a variety of locales such as coral reefs, Asian temples and ancient citadels in order to restore your kingdom under the sea, back to its former glory.

Labelled as a tactical, role-playing game, this is a title that combines a variety of elements from different genres to produce a game that is quite unique in all of its mechanics and gameplay elements. Its story is portrayed through a series of still cut-scenes, with a textual narrative; all presented within a cartoon style of art. However, its main mechanics focuses on a skill and strategy mindset, as you guide your party of squids through a series of levels, avoiding hazards and fighting the corrupted species of marine life. 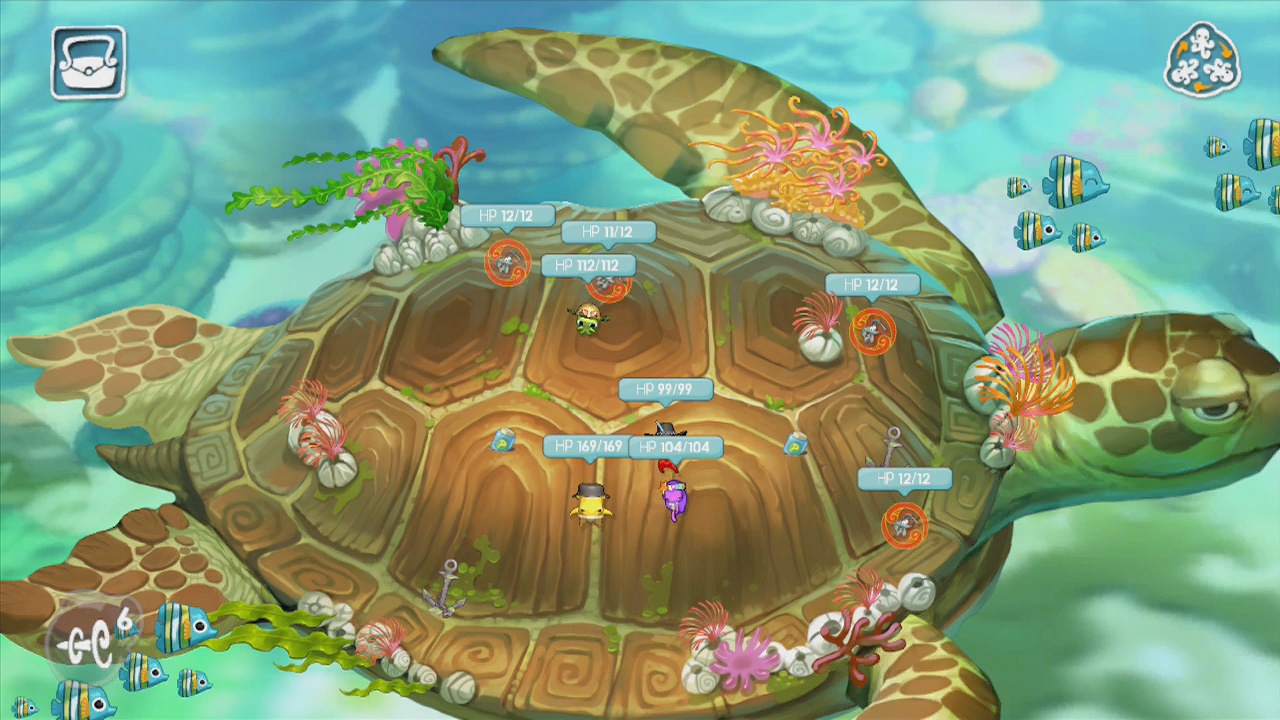 This is performed in an Angry Birds style of play, although one that is viewed from a top-down perspective, rather that the 2D side-scrolling mechanic that we are all familiar with. By using either the touchscreen or conventional control methods, you stretch the tentacles of the various squid, positioning their aim before catapulting them along a trajectory. This method of movement is used to traverse the terrain, as well as providing a form of combat when the enemy species are encountered. Each of the squid contains a reserve of energy, which when depleted, uses up their moves and the turn of another party member comes into play. It creates a style that loosely follows a turn-based mechanic, yet provides a lot more freedom in choice, movement and tactics with its implementation.

Combat is performed by flinging your squid into any enemy types; often taking a certain amount of damage from their health until depleted, or by using the environment to your advantage by nudging them off the edge of a precipice into the depths of the dark void below. However, you also need to make sure that you don’t fling any of your party members off the edge too. The squids are broken up into four classes: Shooters can be equipped with long-range weaponry, Scouts can utilise a boost, allowing them to travel further than normal, or fight against the elements to access new areas, Troopers who can pound the ground, disrupting the area, or enemies around them and even break obstacles and lastly, the Healers who can grant health to your party members by nudging into them.

Although each squid is granted class-specifics, they can all produce basic attacks too. However, they do vary in their degree of damage. As well as the turn-based, or energy based mechanic, you can also use tactical skill to string together a number of combinations; performing a series of bounces that deals multiples in damage and, if you’re really skilful, pull off manoeuvres that heal your fellow squids, as well as deal damage to any enemies. It all runs on a physics-based mechanic that, although requires an element of tactical play, is extremely easy to get to grips with. 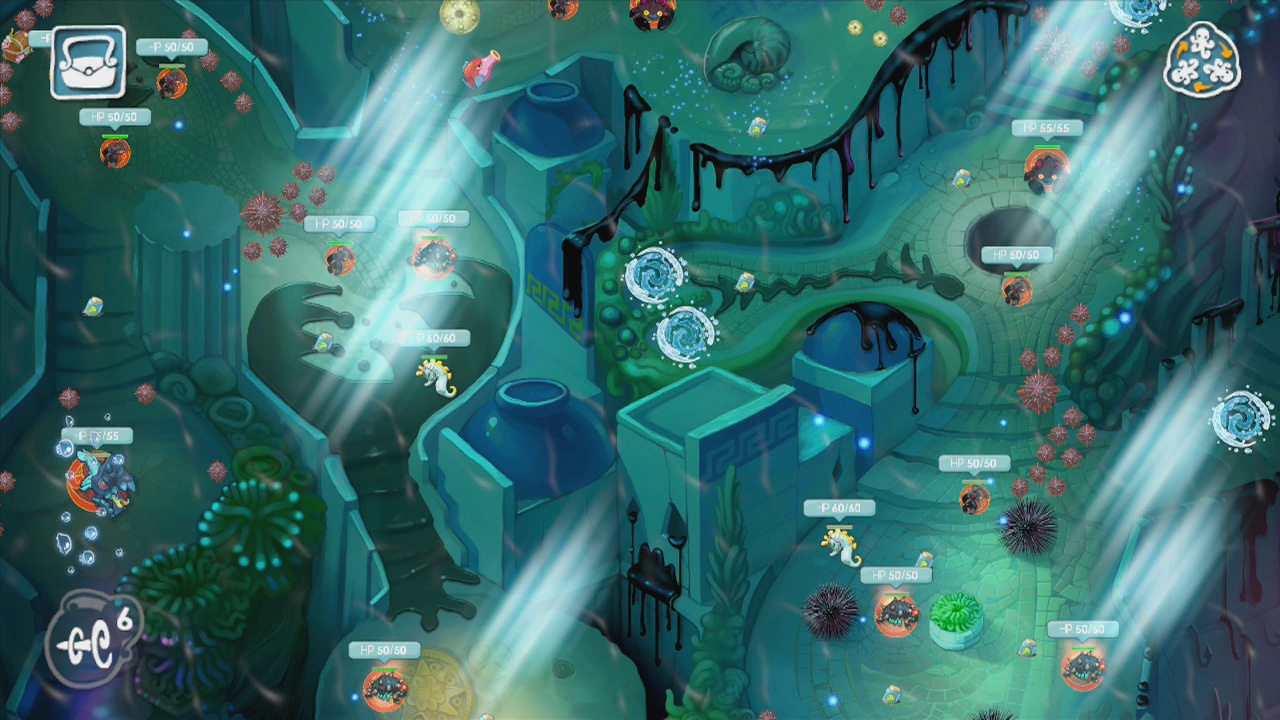 To help you further, each level is also littered with oyster shells, cans and bottles, as well as plethora of other items, that grant you life recovery, shielding shells, dodge abilities and shuriken starfish, to name a few. These can also grant you pearls, the in-game currency, that can be used to purchase a variety of over sixty-five helmets. These can grant all manner of abilities, from upgrading and enhancing the squids characteristics to providing a resuscitation when a party member falls. You can even learn the skills that each helmet possess, allowing you to garner a variety of skills for each squid. It’s here that the role-playing elements of the game are used and, although stat and level boosting, don’t ever really feel as accomplished as a true role-playing mechanic.

It’s also here though, that the game shows some weaknesses in its mechanics, with the menus around party selections, abilities, items and helmets not being particularly intuitive to use. They require a bit of hit-and-miss to work out how to best utilise their options, but given time, they soon become navigational. The use of currency in order to upgrade characters also produces a mechanic that forces you to grind, especially as you begin to reach the latter levels, with a need to revisit previously completed levels in order to accrue enough pearls to purchase the necessary upgrades needed to advance.

Overall, Squids Odyssey does present a quite a niche, little title that is packed to the rafters with content. It can be fun to play for a while. However, it can begin to grind after a while with a repetitive model; making this a title that is more suited to a casual style of play. Its presentation is nicely done; often presenting colourful, underwater worlds with a musical tone to match and its main mechanics of flinging your party of squids around the levels works quite well. It’s role-playing element though, feels just a bit flat, with not a lot of depth and its menus can feel cumbersome at the best of times. Saying that though, this is quite a unique title that does provide a good form of entertainment, as well as a form longevity and replayability with a star/point reward system for meeting certain requirements in each level. It may not be as deep as the ocean in which it is based, but if you’re looking for a tactical, role-playing game that contains something a bit different from the norm, then this is a suitable, casual experience that’s worth shelling out for.