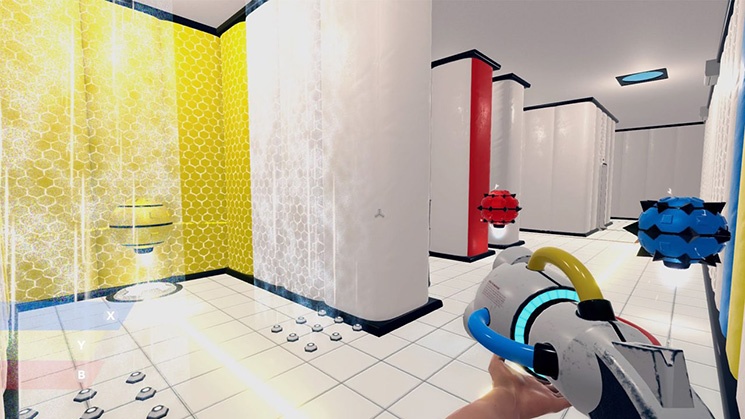 There’s nothing worse for the gaming industry than a title that re-defines a genre or type. Sure, it’s fantastically good for the developers and the players, but it really ruins the calibration for other teams out there who were designing their own game. Let’s say you were someone who had a great idea for a puzzle game where you line up orbs and clear the screen by filling up rows. It’s 1984, you’re a young developer who’s really trying to make it work with little to no knowledge of coding. And just as you’re ready to release your baby, BOOM, the Russians release Tetris. Awesome, now everyone is saying your game is a Tetris clone when you had no idea what Tetris was two months ago. This is the cross multiple developers have had to bear over the years, whether their fighting game was a Street Fighter clone, or their skateboarding game was just a Tony Hawk clone, it must get exhausting. Sure, some of those games may have actually been clones, but several were just taking cues and working them into their own original ideas.

That yarn that I just spun is a precursor to my review of ChromaGun, a new indie title for the Nintendo Switch that is a first person puzzle game of interesting dynamics. Brought to us by Pixel Maniacs, ChromaGun tells the tale of a faceless protagonist who’s been invited to the aptly named ChromaTec to be a guinea pig for their newest piece of technology, the titular ChromaGun. Our dear test subject must use the gun to undergo a series of trials that involve color coordinating wall panels, floating orb robots (called WorkerDroids) and sensory panels to unlock the doors to the next room of the puzzle. Starting off fairly simply, the game slowly ratchets up the difficulty in the puzzles before throwing out all pretext and starting a straight up mission to kill you, which is rather unpleasant. But don’t worry: the meltdown of the company and the murderous rampage is something that is far from abrupt and doesn’t happen till after you’re quite familiar with what to do. 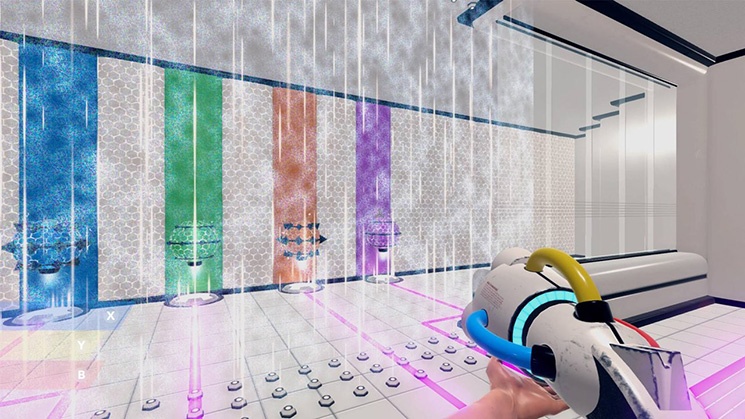 As a first person puzzle game that involves using a special gun to solve puzzles and has a rather snarky voiceover from the people watching you run the tests, it’s fairly obvious to see why folks compare it to Portal. Portal really took the whole “novel puzzle solving while someone observes you sarcastically” and ran it to the finish line, so everyone is eager to try and be second place, even unintentionally. But some big things to remember are that, although there is a gun, it’s far from the Portal gun and thus cannot be compared. Additionally, the scientists who are observing also get caught up in the mayhem and aren’t setting up a psychological trap like GLaDOS, so the commentary is more “I’m making jokes because my job is boring” and less “I hate humanity and thus I taunt it.” It’s much more on par with the voiceovers of Death Squared, though, to be honest, they’re much less funny. And finally, Portal had Companion Cubes, which were lovable in a bizarre sort of way, whereas the WorkerDroids are…well, anything but.

ChromaGun’s biggest focus is the gun itself, which shoots three primary colors and can be mixed to create other flavors that correspond to what you need to solve the puzzles. WorkerDroids gravitate towards like-colored Droids and walls, and will float away from things that get colored differently. The initial Droids are harmless, and later ones are quite spiky and malevolent: if they don’t have something to gravitate towards, they will automatically come after you and try to squish you. You basically have to initialize whichever color you’d like to use, and then shoot it with a separate button; this becomes time consuming when you need to fire a variety of colors in a short amount of time, but it’s far from impossible. Quite the contrary, going slow and taking your time was the absolute key to success, especially when you get to the later levels and realize there’s some inherent flaw with the protocol of it all.

You see, the WorkerDroids, having some very simple programming, only know they need to pull towards the same colors as best they can, as long as there’s line of sight. But the Droids don’t necessarily stop pulling towards some targets just because there are new ones around the corner. This means WorkerDroids can and will render themselves immobile by trying to literally pull themselves in multiple directions at once. A player can easily and often ends up painting themselves into a corner by misfiring and causing a color stasis, resulting in the need to reset the game entirely in order to move on. This is crazy frustrating, especially since the difference between shooting one panel to the left or right can be the difference between success and failure. 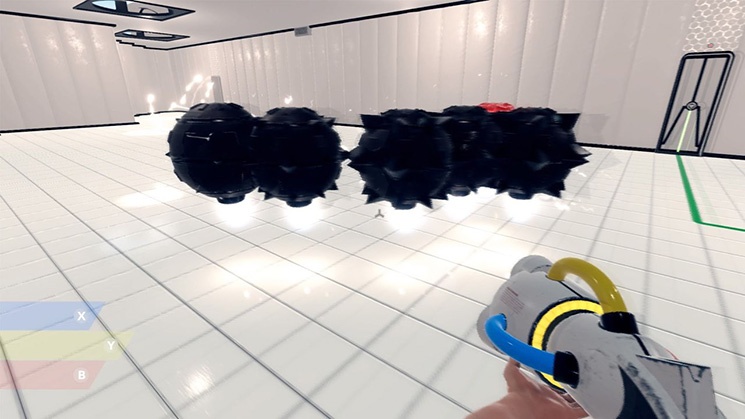 And I did like the aiming and shooting of ChromaGun, I really did. Compared to a game like Morphite, which had incredibly wonky crosshairs, I think that ChromaGun did their homework to make the controls as precise as possible. But the fact remains that ChromaGun was originally put out onto the PC, where players can finesse their shots with a mouse and really bring home the bacon. Joycons are imprecise ( I’ve heard DOOM is pretty damn accurate, though I can’t say for certain) and trying to get a bead on something when a pointy WorkerDroid is bearing down on you or, say, the floor is on fire is a bit tricky. Again, not impossible, but it can get stressful and aggravating at moments.

Still, this is certainly one of the more interesting puzzle games I’ve played in a while, and the performance and execution of the concept and technical aspects are fantastic. Not to mention that they took the time to make a colorblind mode for their game, which is especially classy. ChromaGun is an enjoyable trip that could easily take a couple of days as long as you don’t play in a sprint, and you’ll have a good time in the process. Don’t let the gun and the sarcasm fool you: this game is certainly not a slice of cake.