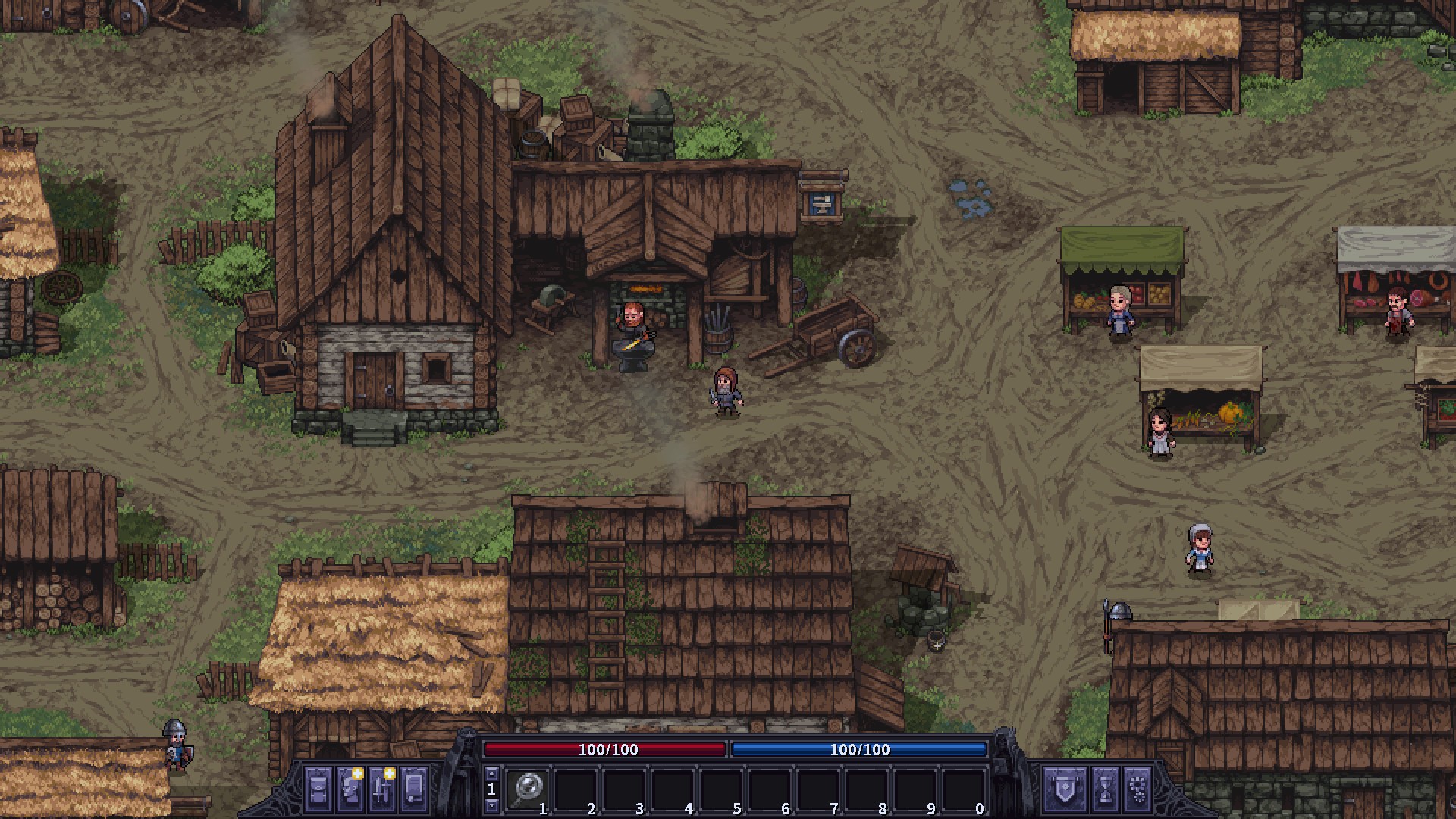 Stoneshard is a gorgeous and lovingly crafted pixel-art roguelike RPG that won’t hold your hand as you fight off bandits and wolves or worse, delve into crypts for loot, and high-tail it to the nearest bar before you pass out from pain. Make no mistake, this game is challenging and will punish you if you don’t plan well and really think things through. That isn’t to say Stoneshard is as cruel as some other hardcore roguelikes such as Unreal World or Stone Soup. You’ll be rewarded well for your efforts if you pay attention and use all the resources at your disposal. So on that note, here’s a quick overview of what you can expect from Stoneshard and why it could possibly be one of the best roguelikes to hit the shelves this year.

The whole game is also turn-based 100% of the time. So time basically moves when you do – à la Superhot. This is both wonderful and frustrating at times as it helps when you need to think things through but can make the game feel like it’s taking ages to get anything done – especially when travelling. That’s a very minor gripe, though. The permanent turn-based system doesn’t spoil the gameplay at all and obviously feels very natural during combat.

Like many other roguelikes, Stoneshard is devoted to creating as much anxiety for the player as possible with fog of war, permadeath, and the odds stacked against you thanks to damage and survival systems and a host of nasty enemies waiting down the road. Actually, not even just down the road. You might think stepping into a calm-looking meadow adorned with flowers will offer you a nice reprieve – and sometimes it does – but there are also wolves, bears, and other nasty surprises waiting just beyond your line of sight. As I said, this game can be unforgiving, and you’ll likely die a few times as you take on the trek to a fortress to rescue a trader or head to the other town to do some trading yourself. But its brutality feels fitting in a world where roguelikes have gone soft to accommodate for those who always want an easy mode. 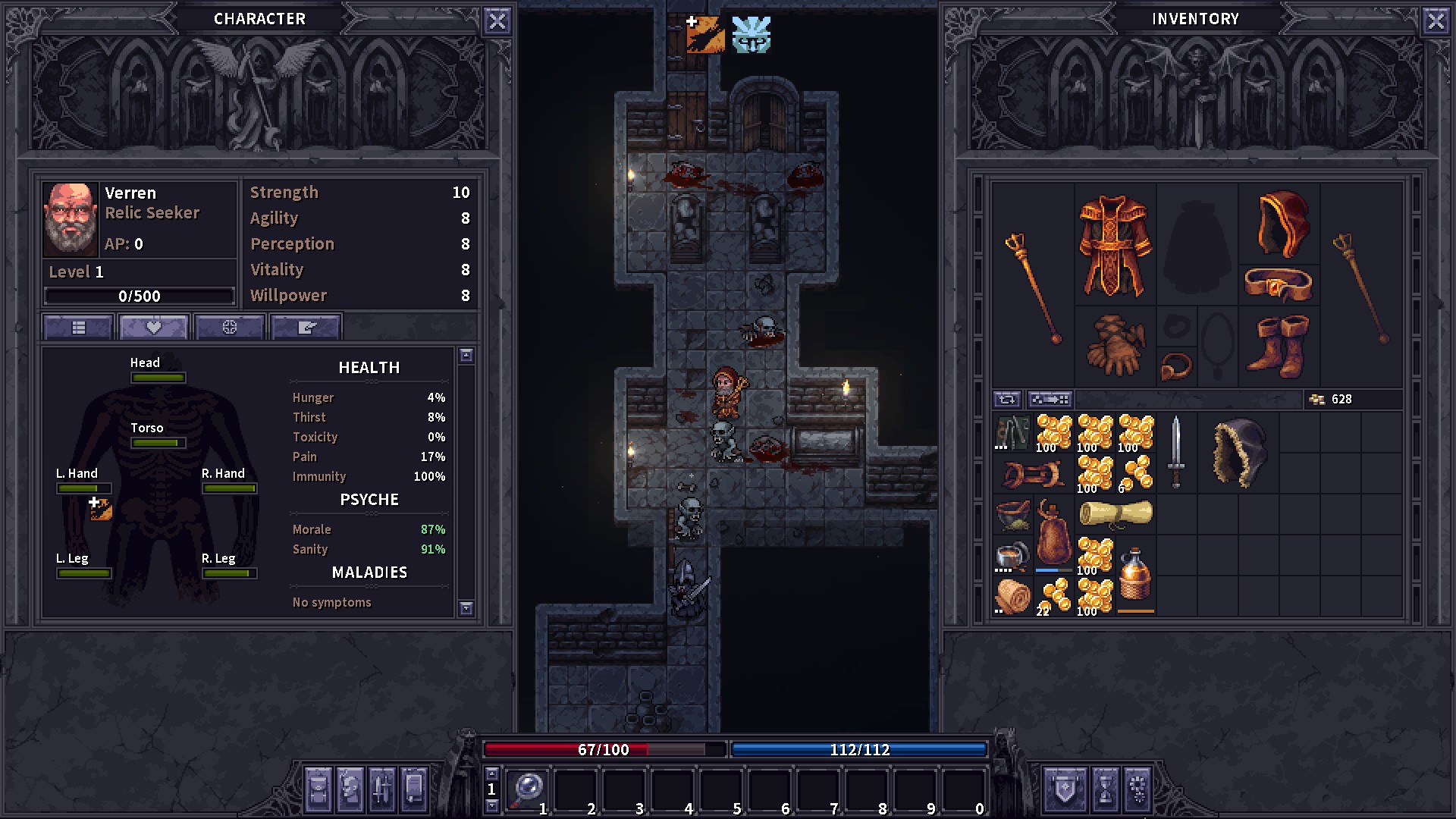 Stoneshard can be accommodating in its own way. For instance, there is a mode that lets you restart the game from your last save when you die. In Stoneshard you can save whenever you rent a bed and go sleep in a tavern. In the permadeath mode that means you get to go on from that point whenever you exit the game, but you’ll start from scratch when you die.

Stoneshard also provides you with a handy map so you can see where you’re going, with some landmarks and points of interest handily filled in. Even though the map does not keep track of where you are so you have to do it yourself (it’s not that hard, I only got lost once), it does point out the threat level of certain places based on – I’m assuming – your level. This helps out a lot when taking contracts because you can have a look first and decide if you’re ready to go there.

All of that aside, arguably the best part of Stoneshard right now is its pain and survival system. Each body part has its own health bar and each gets damaged separately, lowering the overall health of the character at the same time – sort of in the same vein as Dwarf Fortress. This structure allows for more varied remedies, including splints, bandages, potions, leeches, surgical kits, and more depending on the type and severity of injuries you get. Though some of these, especially the potions, will affect your sanity as well. Potions can also do more than just heal – some potions will boost certain stats.

Speaking of sanity – your mental health is another thing you need to keep track of; encounters, the things you eat and drink, and the various herbs you find out in the world will affect it. Both morale and sanity need to be kept up and certain things will affect each of those in different ways. 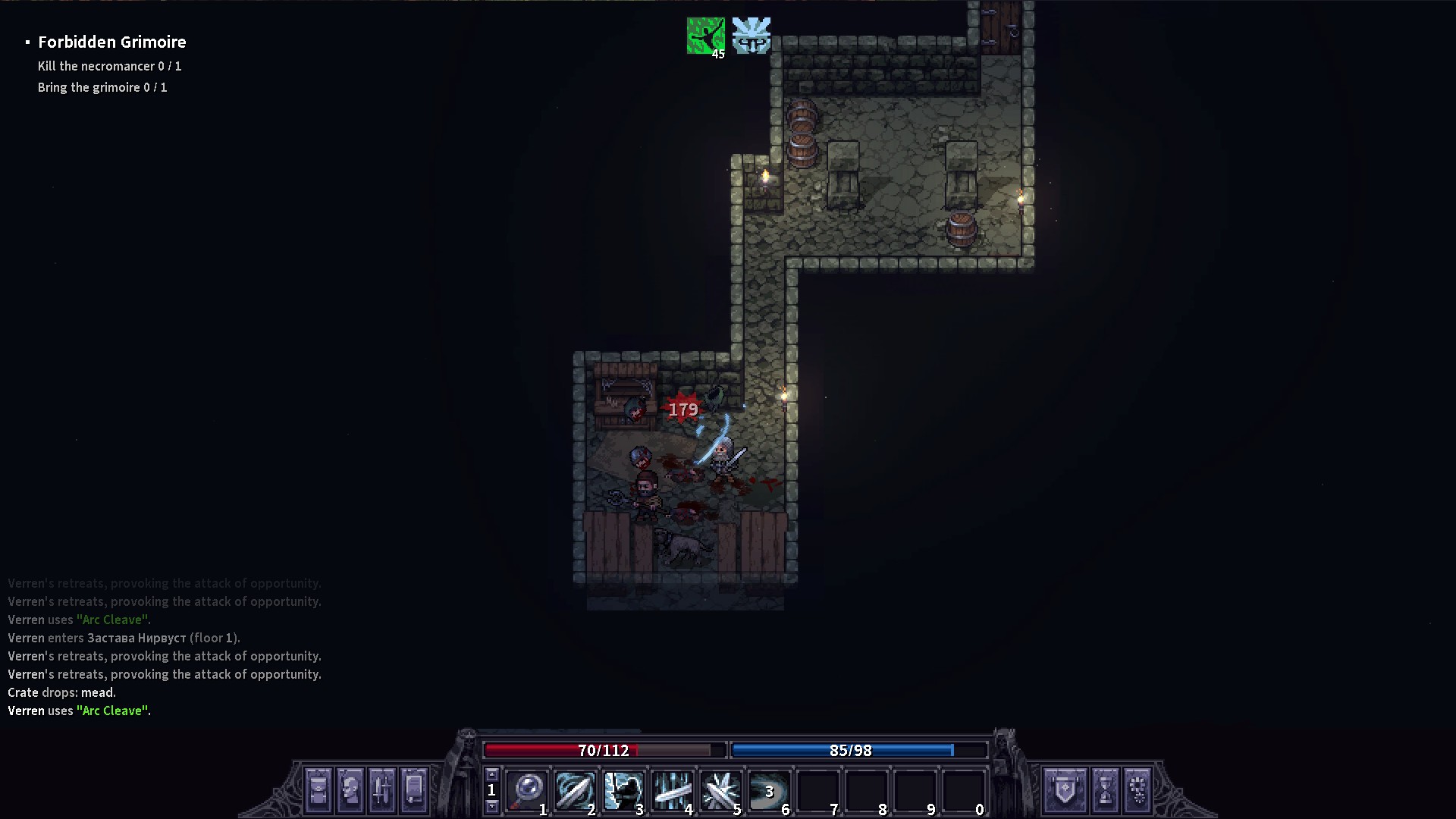 In addition to that, it also has your standard RPG fare of inventory management and character attributes and skills that you can level when your character levels up. The attributes are pretty standard – strength, perception, willpower, etc., and their impact isn’t that observable unless you really like to min/max your character along with all the weapons and armor stats (of which there are many). The skills, on the other hand, do make a big difference. One thing that I really loved about Stoneshard’s skill tree is that it’s entirely open and you’re free to choose whatever you want, much in the same way that Divinity: Original Sin does it. Want to be a club-wielding pyromaniac? Go for it. Want to wield axes but also be an ace shot with a bow? You can do that too. One caveat is that the magical abilities (especially) are pretty limited in the beta version, with only pyromancy and geomancy currently available for you to experiment with. That said, those two skills paint a thrilling picture of what’s to come.

For right now, you can also only go with one of the four pre-made characters even though a character creation option is on the horizon. In addition to that, you’ll be a lone wolf for quite some time still – even though the developers seem keen to bring in a party system as well.

So really, many of Stoneshard’s flaws have to do with its current beta status. The game isn’t entirely well-balanced yet (making it all that much harder), and there’s still a lot lacking in content and missing features. Nowhere is this more obvious than in the storytelling aspect of the game. The prologue (which also doubles as Stoneshard’s free demo) has voice acting and a solid storyline. Character interactions in the rest of the game, however, is limited and banal at this point. There’s also not much of a storyline to speak of – yet. But the basic structure is there and I can’t wait to see what the final implementation looks like.

Stoneshard is a gorgeous and lovingly crafted pixel-art roguelike RPG that won’t hold your hand as you fight off bandits and wolves or worse, delve into crypts for loot, and high-tail it to the nearest bar before you pass out from pain.