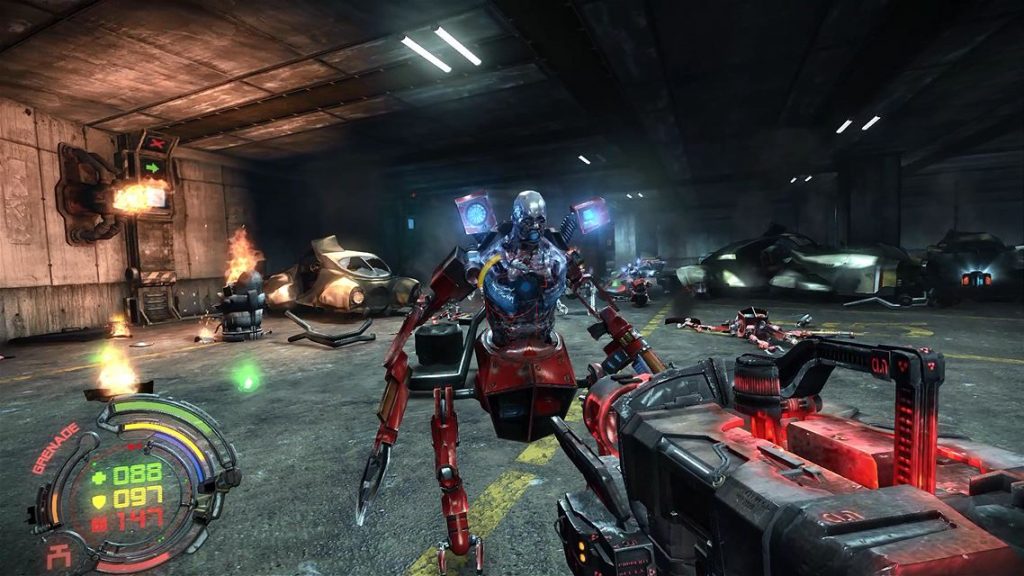 For this review of Hard Reset Redux I decided that I’ll avoid making any mention of Doom.  Not a single one.  Honestly.  Not one.  What?  I just did?  Rats. To be fair it’s almost impossible to play Hard Reset Redux without your mind wondering over to ID Software’s seminal shooter.   Matters aren’t helped by the fact that the reboot of both games was launched virtually back to back. Coincidence or just unfortunate timing?  The jury’s still out on that one.  What we can say for sure is that Flying Wild Hog’s post-apocalyptic shooter is a blast to play and,  while it’s an also-ran when compared to Doom,  it can hold its own against most fps titles and blows a fair amount of them out of the water.

Story wise, although drawing its inspiration from authors such as Phillip K. Dick and William Gibson,  Hard Reset won’t be winning the Booker Prize anytime soon.  It’s the future,  AI powered machines have taken over and humanity is reduced to defending its last stronghold.   You’re cast in the role of a human survivor called Fletcher whose task is to make his way through Bezoar City, investigate whatever’s going on and take out as many robots as he can in the process. Like we said, it’s not War and Peace.  But it’s not intended to be.  Rather the storyline is a mere platform for what is Hard Reset: Redux’s raison d’être: shooting tonnes of robots in the face.  And while you’re despatching the mechanical hordes to whatever Hell they came from,  you’re giggling and rubbing your hands together like randy uncle at a family wedding. 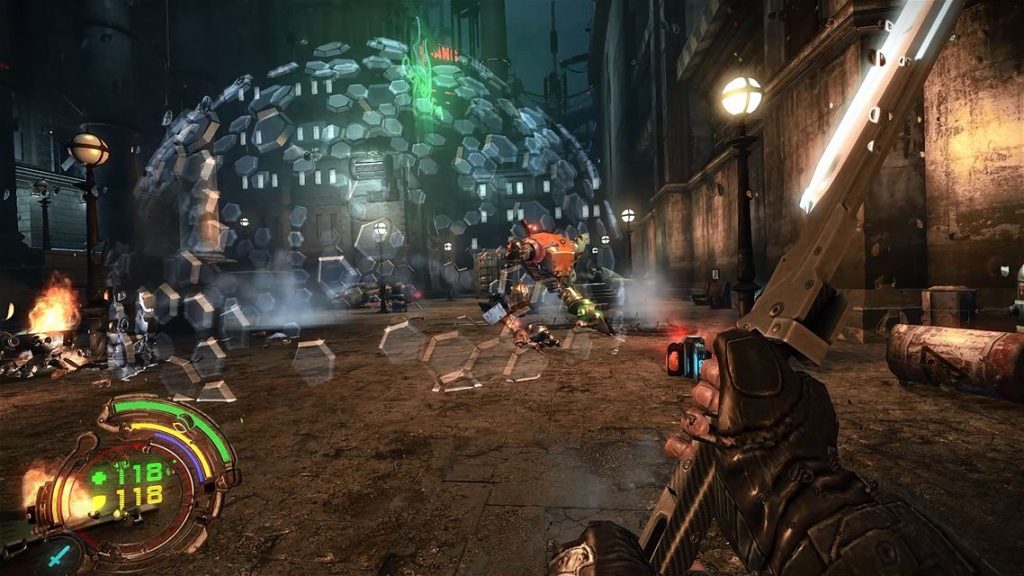 To say Hard Reset: Redux’s pacing is frantic wouldn’t be doing it justice.  Imagine what would happen if Doom and Serious Sam had an illegitimate son.  And then equipped said offspring with two devastating weapons, tonnes of ammo and a constantly recharging get out of jail free card and you’ll be somewhere closer to the truth.  The game starts you off with a deceptively easy opening scene, blasting smaller robots and making your way through the otherwise deserted city.  But it’s not long until the larger much tougher machines are out for your blood and you’re spending most of your time running backwards, firing at anything that even looks metallic.  After the first few minutes of playing Hard Reset: Redux I found myself gasping for air.  Why?  Because I’d forgotten to breath.  Unlike most shooters where all you have to do is make your way through a level,  Hard Reset: Redux actively encourages players to explore by giving you secret areas to find (usually by blowing something up) and rewarding you with extra NANO which you can then use to upgrade your guns or transform them all together.  As mentioned earlier,  the weapons themselves come in two varieties: the  CLN Modular Assault Rifle, which can be transformed into a shotgun, RPG or grenade launcher,  and the EEF-21 Plasma Rifle which, with enough NANO, can be turned into a rail gun or a smartgun.

Graphically, Hard Reset: Redux does a great job of recreating a bleak cyper punk world thrown into darkness by oppression and fear.  During our play through on the Xbox One,  Hard Reset ran as smooth as silk with no noticeable frame rate issues.  Audio-wise, the game is pretty minimalist.  Without the sound of gunfire and explosions punctuating the night air, the world is eerily quiet.  However,  when the mayhem kicks off,  the game explodes into a cacophony of heavy metal guitar riffs and the sound of metal against metal.  Sweet. 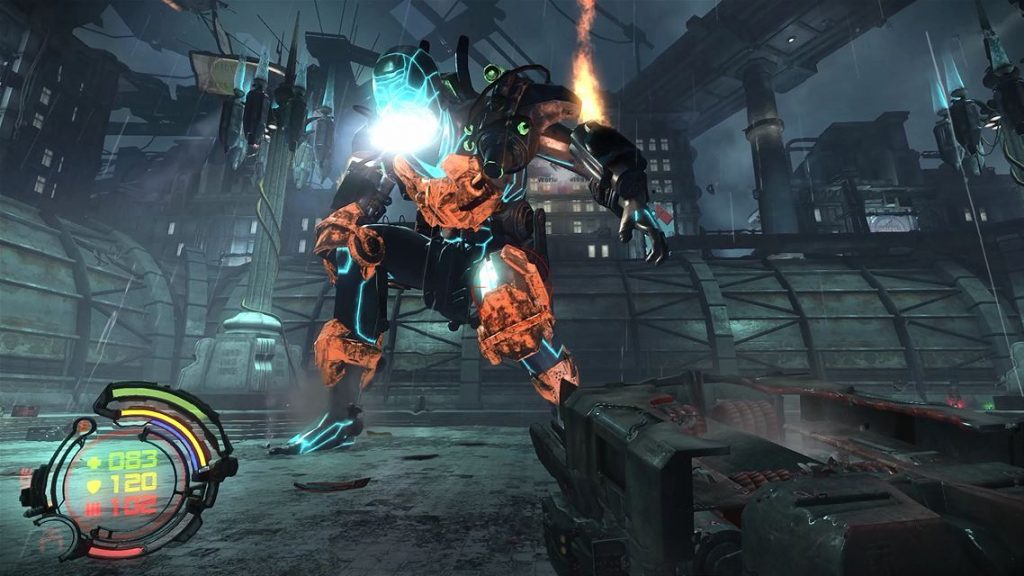 For die hard fans Flying Wild Hog have also thrown in a survival mode to accompany the single player campaign.  With a choice of four locations, the arrival hall,  landing pad,  coliseum and factory, your task is to hold out for as long as you can against waves of enemy opponents.  Again the gameplay is frenetic,  exhilarating and should only be attempted by gamers with a steely nerve and  a steady hand.

If we had any niggles with the game it would be with the lack of an on-screen mini map and the surprising absence of an online mode.  Although great as a single player experience,  Hard Reset,  like most things in life, could be much better when shared with others.

While Hard Reset does little to reinvent the genre,  there’s no denying that Flying Wild Hog have made a fantastic contribution towards re-invigorating it.   Hard Reset is a satisfying taste of that old school flava that we wish we could savour with our neighbour.   But even without an online mode we thoroughly recommend this unashamed blast from the past.