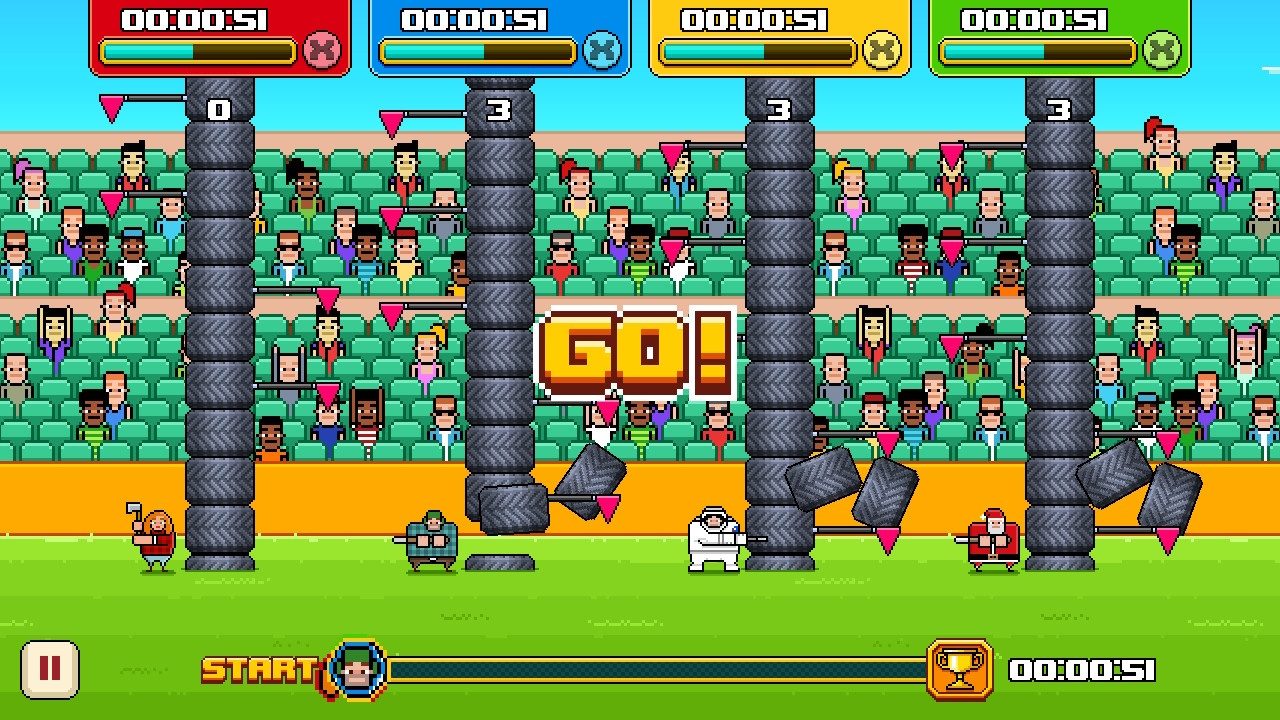 It really bums me out when a game is boring. At least if a game is bad, there’s usually some semblance of what the developer/designer was trying to do, and thus you can be more objective about the successes and failures. Monster Jam, for example, was clearly trying to cash in on the monster truck fad thirty years too late in the laziest way possible, and it could have been so much better. But when a game is tight, clean but ultimately boring, it’s just so much sadder.

Timberman Vs. is an incredibly simple game about cutting down a tree. You use either the control buttons, the normal buttons or the joystick to designate if you want to swing on the left or right of the tree. You keep your eyes open for upcoming branches and dodge out-of-the-way by switching sides of the tree. Cut until you can’t cut no more. That’s it. That’s the entire game. There’s a few different modes: classic, where you simply cut either alone or with friends indefinitely (aka until there’s one left), hero, where you solo cut to rescue baby birds, or race, where you…race. 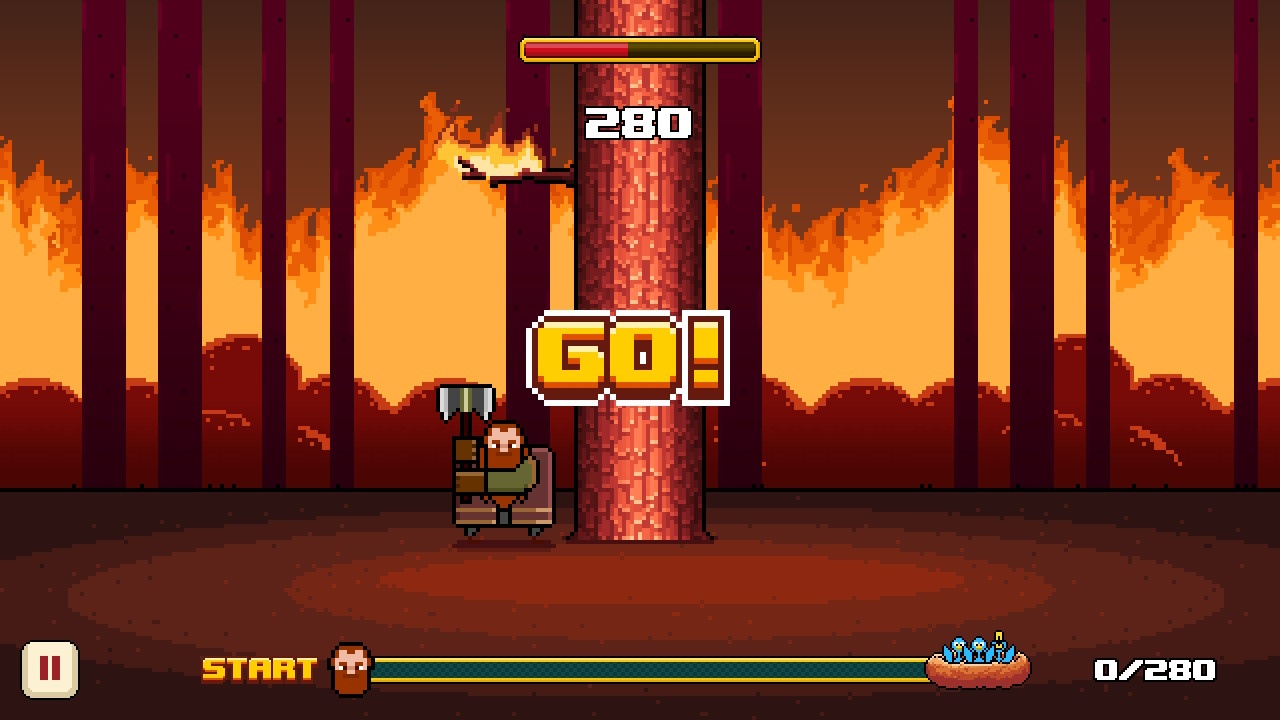 What’s fascinating about Timberman Vs. is that there’s a ton of work that went into this game being all that it could be. The pixel graphics are done incredibly well, and really capture a modern, blocky mentality on everything from the trees and backgrounds to the over fifty different unlockable characters. Yes, I said fifty. There are more than fifty different, totally equal sprites that you can use to cut down trees, from the classic lumberjack to Edward Scissorhands to any other popular icon you could imagine. You can only get them from leveling up, and you only level up by playing this game an eternity. I cut down something like four hundred bits in a single run and barely got enough XP to get halfway to level seven. This is after sampling and playing all the different modes to get a feel for the game, so it’s not like I got six levels worth in a single go. This was play number eight or so.

And if you want all that precious experience, you’re going to want to go with Hero mode. Hero mode not only gives the most XP if you actually rescue the birds atop the flaming tree, it’s also one of the most randomized, unbalanced modes available. In classic or race, you have to either contend with your friends, CPU opponents or, at the very least, your own skills. Classic will gradually speed up the cooldown timer: you initially get a lot of flex room to swing slowly, but it gradually gets faster and faster until you can’t pause for anything for fear of the timer running out. Race mode has potential, because you can simply set the other three spots to opponents who aren’t really there and dominate the race. But Hero mode allows you to chop at a relatively unhurried pace: if you’ve played a bit and just keep up a good rhythm, you’ll reach the top in no time. Additionally, the number of chops is randomized: for beginner mode, it fluctuates between about 190 to 280. But if you do the highest difficulty (ultimate lumberjack) there’s a flux between about 700 and 1000, which is a huge window.just keep dying till you get a 700 target, then go to town and get the XP in about three minutes. 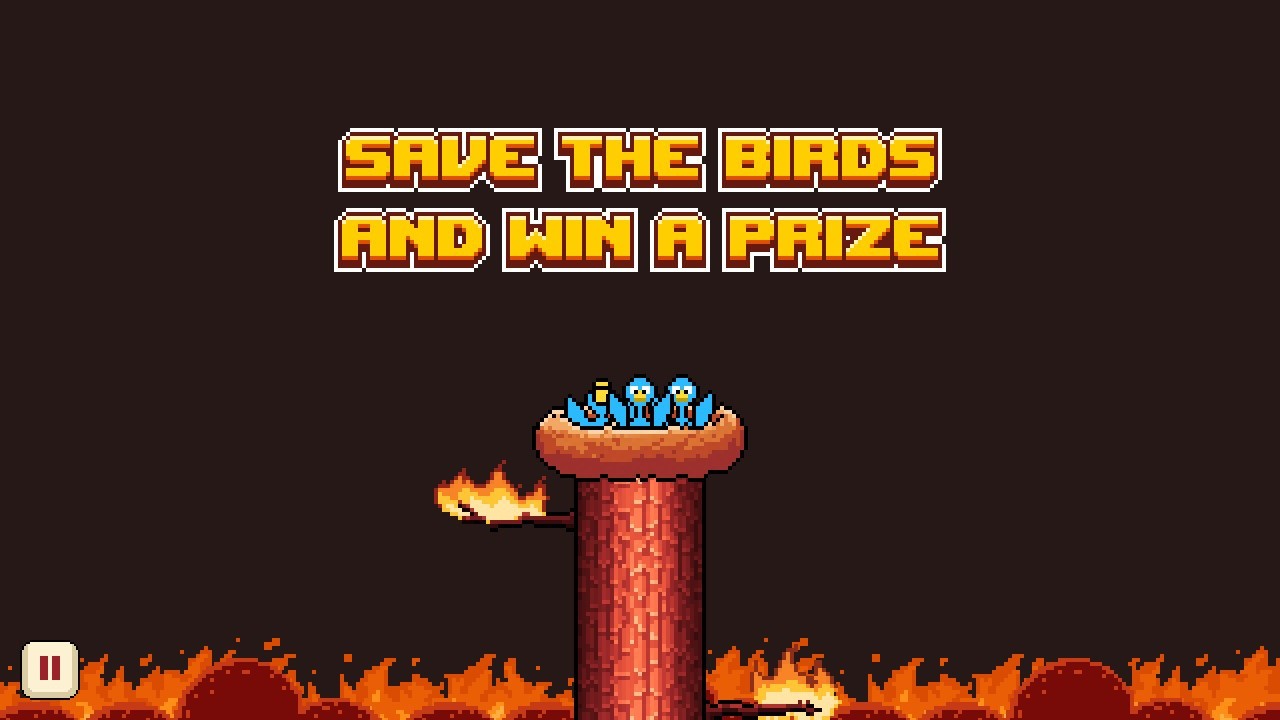 With a great chiptune soundtrack and a lot of thought put into this simple game, it’s hard to really put down Timberman Vs, but that’s what I really want to and have to do. Notice how I’ve only talked about the game for a couple of paragraphs? That’s because there isn’t more to mention. Sure, in race mode, you get a boost on occasion from gameplay streaks, but that’s not customizable or anything. There’s rumble, but it isn’t HD and, frankly, it’s super jarring and I turned it off immediately. The entire game is essentially Pokey Pummel and Flip the Chimp combined into a single entity. Which begs the question: did you like either of those two minigames enough to play them exclusively?

I think many will give this game a go simply because it’s two bucks and the style is well done, and maybe you’ll get two dollars worth of enjoyment out of it. In an ever-growing Switch marketplace, however, this sort of party game isn’t as wowing and enticing as it would have been, say, a year ago. It just feels like another mobile game that’s been given a facelift to try to grab more fans on the hottest console around. But I think you’ll find that, if this game drops in the forest and no one’s around to see it, not many will ponder about the sound.