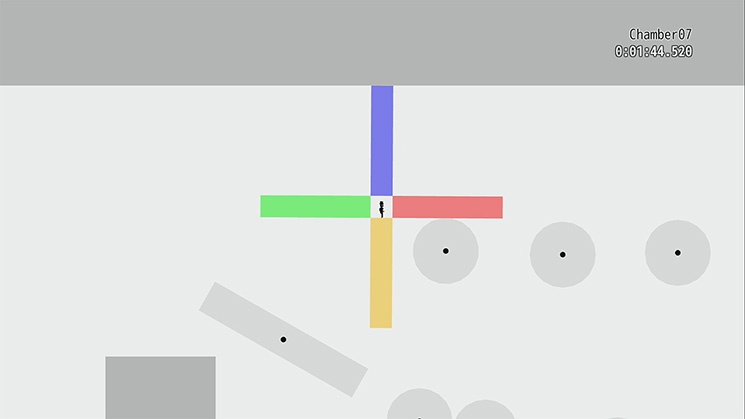 There’s an old poster that I once had on my desktop computer that I’d rotate into my wallpaper every once in a while. It reminded me that just because something is unique doesn’t mean it’s useful, and, I loved having that to ground my own innovations and creativity. You see, there was a time where a lot of people were pushing the boundaries of new ideas and concepts for the simple reason that they were different, and not, necessarily, because they were good or enjoyable or even practical in any facet. There’s still more than enough of that in the world, but that’s neither here nor there. The point is that not every bold, new action needs to be recognized as something wonderful if its, well, unbearable. And there are moments that really stand out as such in the newest Switch puzzle game, TorqueL -Physics Modified Edition-.

The concept is fairly straightforward in this bizarre puzzle game: move your character from one side of the screen to the goal at the other. Along the way, there will be pitfalls, traps, and generally unpleasant situations to make it more difficult. Fairly early on, you’ll be introduced to the idea of blue wavelengths that change and push around your character (who is nameless) in the direction that they are flowing, although multiple currents can exist in one section. By itself, purely in level design and concept, TorqueL is already challenging. The idea that a character could run, jump or do any other kind of natural movement in order to advance themselves to the goalpost is already quite daunting. But, were it simply that kind of game, TorqueL would quietly sit in the back of class and not call any attention to itself. TorqueL is simply not that kind of kid.

Instead, what the player is treated to is a cube of containment in which the character moves. You run in it, like a poorly conceived hamster wheel, and move yourself sloooowly towards the goal. More importantly, the cube is outfitted with colored walls that can extend a finite amount, like a rectangular Doctor Octopus, in order for the player to push themselves, plank onto ledges and, in many cases, keep danger at bay with a proverbial pole. Each of these extendable walls can be activated and deactivated with a button compression, and you can even shoot them out in quick bursts to simulate jumping or otherwise tapping something. Again, interesting, and certainly something I hadn’t seen before. In the first couple of levels, you get a feel for what these block arms can do, and it begins to feel like this is going to be some kind of adventure in orientation and timing. Guess what, it totally is. 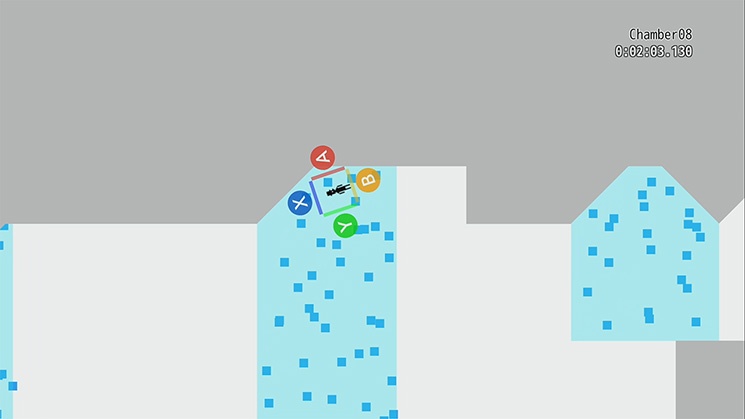 TorqueL’s biggest appeal is the off kilter approach to navigation and movement, and, in the same exact swing, this becomes the games biggest downfall in terms of replay and connecting with players. On the one hand, if you have a good head for compartmentalization and fast, analytical thinking, it quickly becomes a real pleasure and even something that develops a speedrunning sort of style. The cube spins in a logical direction as you move, and the spin is affected by outside elements, like the ever-changing puzzle environment and the force you exert on yourself with the wall fires. If you feel confident in Rubix cubes under pressure, or being fast on your fingers with good identification of color factions, then you’ll be all set with TorqueL. In fact, I also have to give a lot of recognition for a solid implementation of the Nintendo Switch’s HD Rumble within the game. As you spin and move, the point of vibration based on the button you choose will change, and you can actually feel how the game is repositioning itself, and, for the tactile user, this helps you in a massive way to get your bearings as you spin through space. This is a great experience for anyone who’s interested in playing a game with multiple points of stimulation.

Now, naturally, on the other hand, this is a game that works in bursts of speed and slowing down. When your cube is on the ground with no extenders put out, the rolling is arduous and almost frustrating in the crawl. However, the second you start shooting out colorful pillars of insanity, you quickly lose control if you’re not prepared for it. I’m reminded of Tobey Maguire’s first time swinging as Spider-Man: it was hilarious and understandable, but I would have hated the movies even more if he was that spastic for his entire superhero career. Additionally, you expect to get better at the control of the game, and that’s sincerely a point that comes down to your own ability to adapt to your spins. When you watch the game in a slow motion replay, you notice there are split seconds that are the ideal time to either react or wait, and it makes all the difference. It took me several deaths on the 15th puzzle to finally understand that this is twitch gaming, but presented in a different package. You always spawn in the same starting position, the puzzles and platforms have the same pattern, but you have to react and be ready for it in different ways. If you start your spin the second you get dropped into the game, you’ll need to fire different walls at different times than, say, if you waited a second longer. 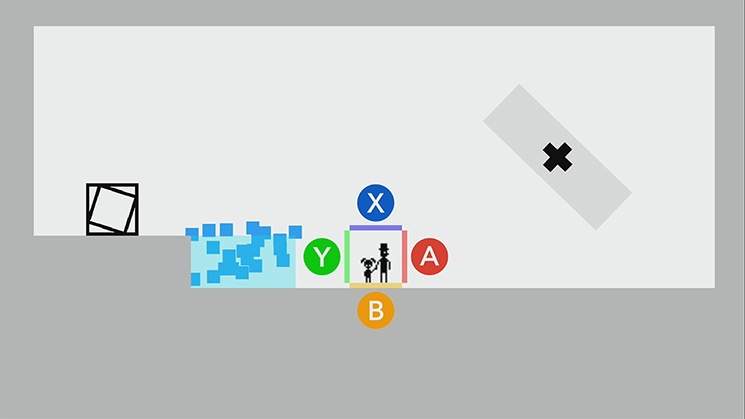 On the other stimulus front, TorqueL succeeds wildly in music and feels very coarse in graphics. The electronic score gradually gets more complex and engaging the further along you get into the game, to the point that it becomes a totally different tune by the end. The music also rolls itself backwards if your character moves as well, and everything stops the second you stop moving forward. It’s dynamic and exciting, and I love that. What I don’t love, by the same token, is the overly simplified graphics. There’s nothing wrong with doing low fidelity pieces, or taking a stand and not going overly artsy, but it feels like this was originally mocked up in MS Paint and the developer said “That’ll work, good enough.” The ridiculously simple graphics also seem to starkly contrast the difficulty of the game, which comes not from poor creation (which was the case of many older titles) but genuine, split-second skill decisions. But, as a result, players might feel anger towards the game instead of their own ability. God knows I did.

Overall, TorqueL -Physics Modified Edition- is an interesting situation, if only because I’m still not sure where I sit with it. There’s some creative design and interesting execution, but the frustration factor is real and it quickly becomes unappealing when you die for the 50th time in the same spot. Moreover, the timer always running on both the level and your total gameplay is aggravating if you aren’t purposely going for a speedrun of some kind. Additionally, I do wish I could have mapped the buttons to the right joystick instead of just the set buttons, but that was probably something to do with the game’s HD rumble and overall performance. So, the takeaway here is to give it a shot if you’re into difficult logic puzzles with frantic finger action, and avoid it if you’re not wearing the wrist straps for your Joycon. I’m going to go make tea and try to my blood pressure down.