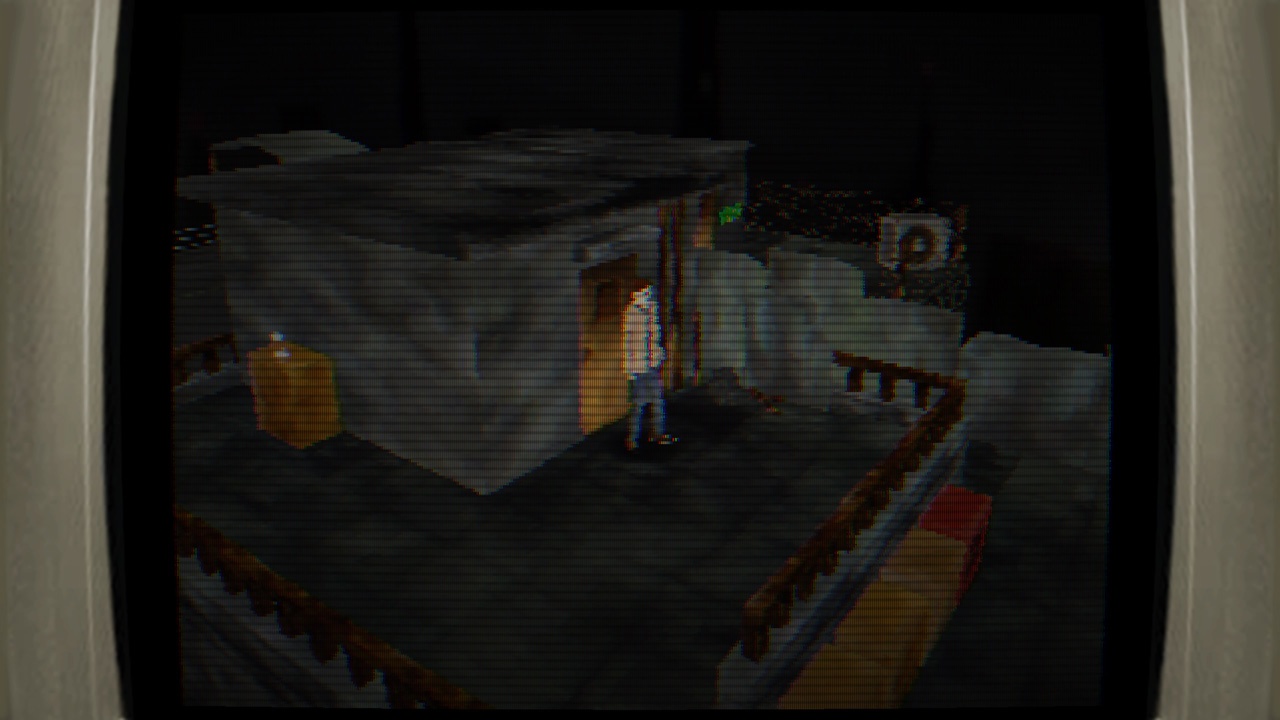 When I first found out about a game called Back in 1995 some years ago, I was deeply and honestly intrigued. One thing that people often forget is that the limitations of video gaming happened in multiple instances beyond those of just the old, single bit Atari games and things like that. When the Playstation was first exploding onto the scene, people were stunned by how good and how animated games looked, yet time has shown there were a lot of roadblocks that rose tinted lenses kind of gloss over. Throw the warped code out, the developers of the game (and one of the best dev studios I’ve ever read), remembered the frustrations that came with titles like Resident Evil, Silent Hill, and Final Fantasy VII. Back in 1995 seeks to tell a story while also transporting players back to those faithful days, and, in the time machine sense, the game succeeds wildly.

The main character, Kent, is a man with very little explanation or exposition. From the very beginning, you’re simply introduced to the dude as someone who is now in a city, clearly doesn’t want to be, and is heading towards a Tower. Over the course of time (which Back in 1995 doesn’t have a lot of), you learn that the city had a massive catastrophe some time ago, and you got the hell out, but now your daughter’s missing, and you gotta try and find her (thus returning to the city). The whole story is told through minimal vocal exposition from Kent and a choice set of NPCs, and also through walls of text that occasionally crop up to help show us internal dialogue. The story isn’t particularly original, but it makes for a good vessel for where Takaaki Ichijo, the game’s creator, wants to bring us, and what he would like us to see. 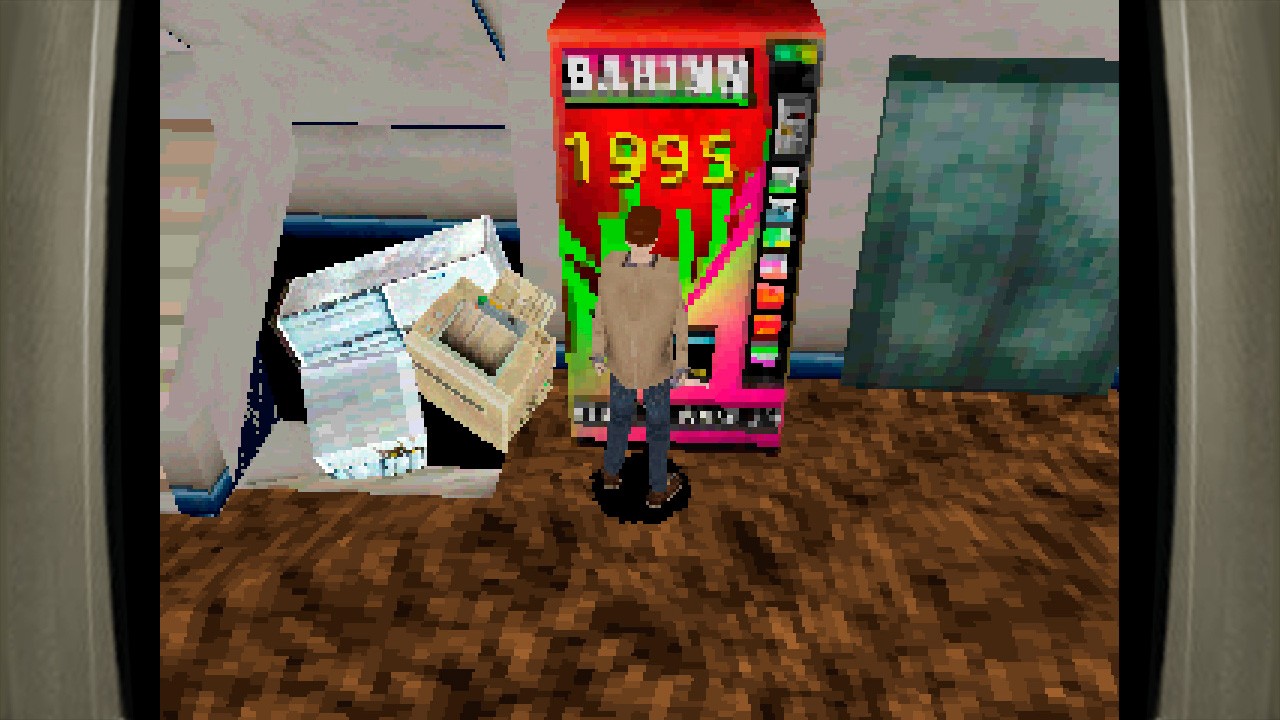 As an artistic piece, Back in 1995 succeeds wildly on multiple levels, and  the effect and execution is done marvellously. This is one of those few titles where I really recommend to leave the CRT lines on so that you get the full sensation of trying to play a fifth generation machine was like. Many times, when people do throwbacks to titles from the Playstation or the Nintendo 64 or even the Sega Saturn, it’s an attempt to capture the very core ideas (storytelling, platforming, occasionally atmospheric elements) while whittling away what has been vastly improved by technology and time. With Back in 1995, everything is perfectly captured in visual and executional style. Your character moves and clunks along in an awkward line that needs to be perfectly centered with certain points to each room (the staircase, the computer, the item you want to pick up), or it simply doesn’t happen. There were so many times when I simply slid along a wall, face first, until I finally hit the game point that let me do something else. When an enemy was coming, I had to either attempt to moonwalk out of the situation (and risk losing my orientation should something else pop up) or spin on the spot and then move away. Enemies, thankfully, moved at the same molasses speed, so the risk of death was usually quite low.

Back in 1995 also mimics the graphical design of the time, giving everything a truly rough, hazy look overlain on polygons. When people think polygons, they point to Minecraft, but they have no idea how blurry things could look on a lot of televisions before the turn of the century. Even without the CRT filter on, Back in 1995 often has you squinting at the screen, trying to dissert exactly what it is you’re about to pick up before you get it. That’s also provided you reach the item in time to align it with the camera before the developer decides it’s time to adjust the angle. Yes, in the days of the right joystick doing very little, the sudden jump in camera angle gave me massive flashbacks to my old school days of Resident Evil, and my black disk that came in a case the size of a VHS cassette. Such amazing recall of things being repeated over and over because making original, finely detailed sprites would cost too much money and take too long. When you’ve got six of the exact same office chairs to look at but only one is the cubicle where you can find the key, it gets insane and frustrating, not to mention you’re still trying to aim yourself properly to hit the monsters with the pipe wrench you found. 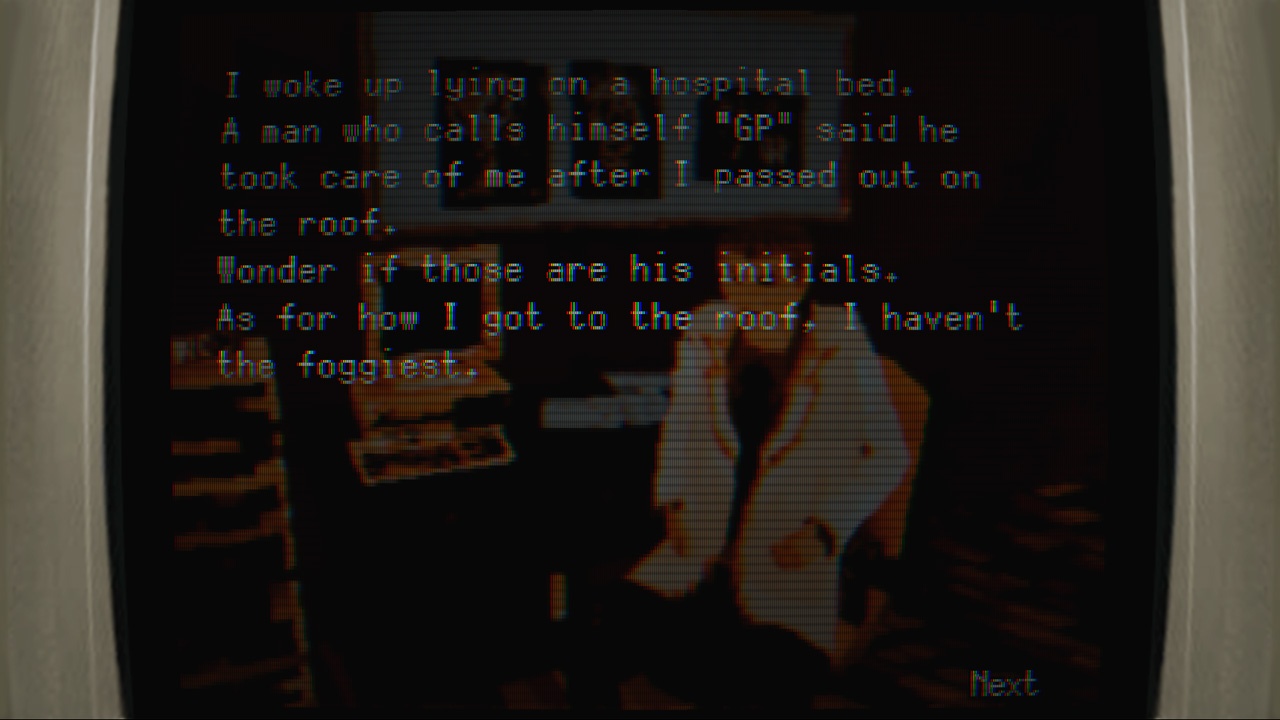 As a survival horror inspired title, Back in 1995 also does a great job with the audio, both in terms of mood setting and emulation of the style over twenty years ago. The music is always a bit dissonant, creepy, and generally oppressive to remind you that things are bad and you’re in a bad place. It suits so well, whether you’re meandering through hallways or striding about on a darkened rooftop, you know that something’s more messed up than it should be. Plus, the interspersed vocal drops from the characters is a welcome reminder that audio used to be quite uncompressed and we couldn’t fathom fully voiced games in any capacity. I’m not sure what technology they used to help capture the old, clipped and sort of hollow feel that voicework sounded like back in the day, but damn it’s spot on.

As a game itself…Back in 1995 is short. Like, ridiculously and incredibly short. Players who have the patience to do so can get through the game in about 2 hours, almost certainly less, and the effect isn’t always satisfying. You realize, after a short while, there’s an artificial buffer of time created by how the game handles: if you were able to run or basically move in a more natural way, you’d be finished in under an hour. You are never really in real danger from the enemies, and dying just means respawning at the last save, which is fairly generous. A lot of the puzzles are explained clearly and you just end up fetching things (be it keys or information) and then moving from there. By the time you get to the tower, you’re shocked to realize this is the end of the game and, after a bit of exploration (which could honestly take two minutes or twenty, depending on where you start), that’s the whole shebang. I can understand that creating a feature length game in this style isn’t a sustainable model, and I think I’d lose my damn mind trying to do something that was 20+ hours today in the same way I played the Playstation back in junior high. However, I could see a lot of people being annoyed that the game was over so quickly, and I sympathize, but that feels like it’s missing the point.

Back in 1995 has style simply oozing from every facet, and this love letter to a bygone era is done in a far better way than I could have imagined. Ichijo didn’t just slap a filter over a decent game and purposely make the edges rougher, he managed to distil what gaming was like in the mid to late 90s and present it, fully formed, in digital download format for brand new machines. It doesn’t matter if you play it on the Switch or on you’re insanely overpowered PC rig, you’re still going to be dropped back into a time where memory cards were paramount and your console was your CD player (though someone at school talked about something called VCDs?). How can you have nostalgia with a brand new game? That’s the magic trick that Back in 1995 pulls off, and it needs to be played to be believed.