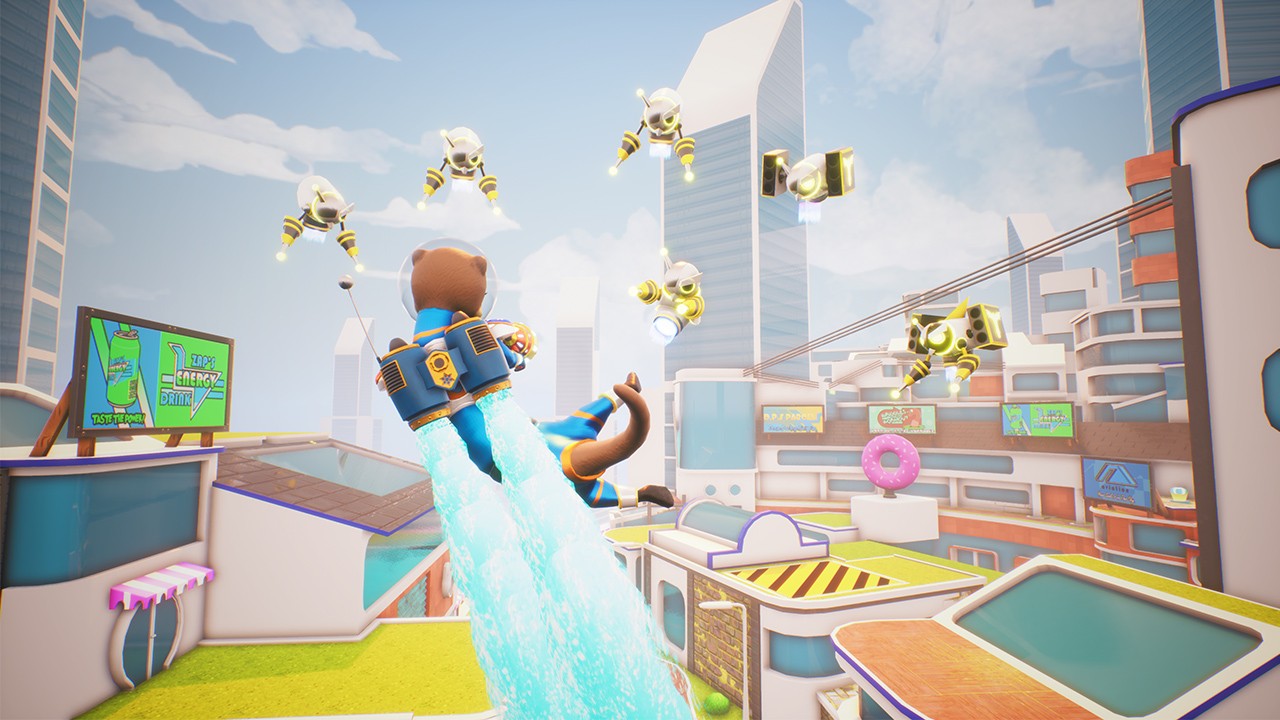 The Otterman Empire is now available on Xbox One, PC and Nintendo Switch, and is developed and published by Tri-Heart Interactive. It is modelled as a third-person multiplayer shooter party game. The game has a single player and four player local Co-Op campaign, which is fantastic if you have some real life friends (I don’t) to play with. I was intrigued to give this one a play as though its visual looks as if it’s aimed at the younger generation; I had heard talk about The Otterman Empire directly compared with Splatoon which can only be a good thing right? Keep reading.

The Otterman Empire sets you off with a short tutorial, which, if I’m honest confused me more than being informative. Even though the basics were being explained to me it was in a very compact arena with jerky, awkward camera angles. It was asking me to hold A to use my jetpack and no matter how many times I attempted this, the jetpack didn’t even function. This caused me to quit the tutorial completely and question whether the A button on my controller was even working. The A button was working, so it’s clear that the tutorial was flawed here.

The Otterman Empire boasts 8 customisable characters, but their powers are unclear until you dive into the game itself. The game also introduces you to eight different worlds in which each includes three different stages, I’ll leave you to do the maths here. So it isn’t hard to see that you’ll mainly be playing as otters in this game, which is a first in the gaming scene for me to be fair. Not only that, these Otters have guns and jetpacks, but there are a few surprise characters thrown into the mix here, one being a crocodile, a fish and something with a colander on its head? Some of the campaign is based on the lead character Tiko, but it feels tacked onto the game. 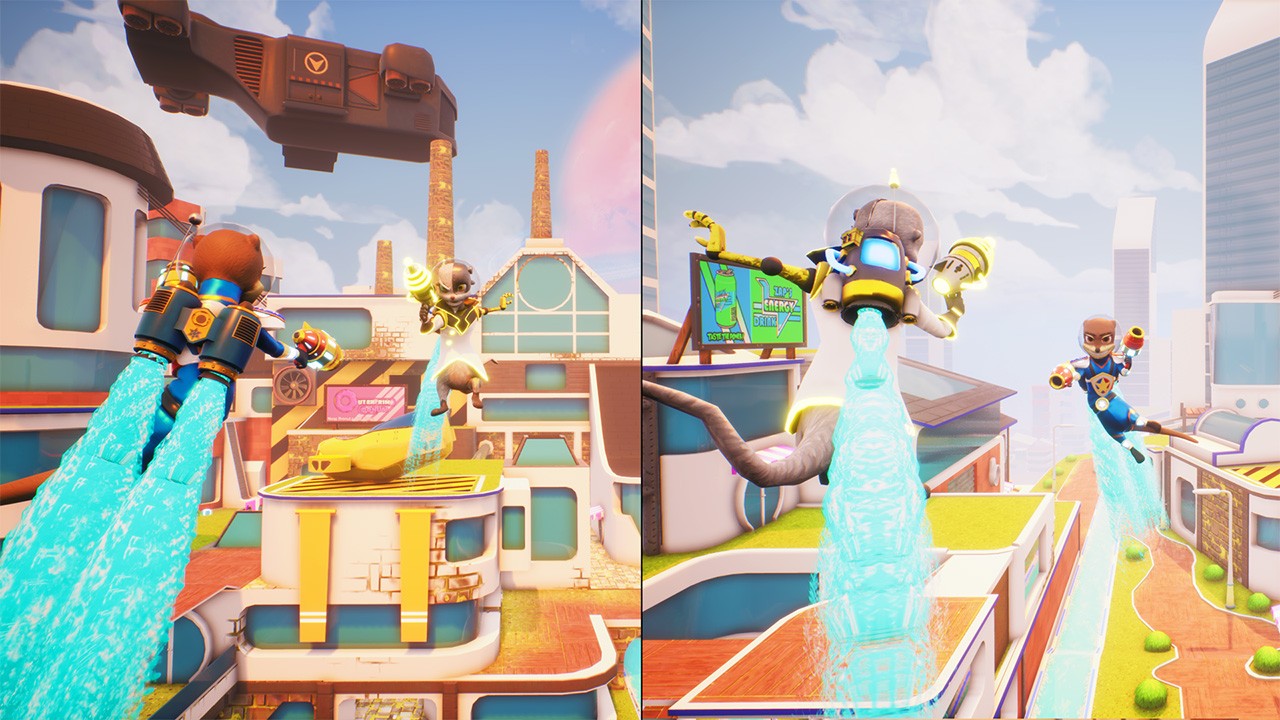 The gameplay itself is a bit of a tricky one to explain, because when you look into the mechanics and the ideas the experience throws at you it has the solidity to become a grounded great game. The problem is, it feels extremely clunky, unpolished and unfinished, which doesn’t work well in a hectic game full of carnage and chaos. There are some good game modes with different objectives which can be fun if you’re playing with others, but not so much playing alone versus AI. Whilst there are quite a few various elements to the gameplay, it won’t take you long to plough through the campaign missions, it took me just shy of an hour and a half. It is useful to plough through the campaign to familiarise yourself as the tutorial is pretty bare bones. What I will say is, even though I criticised the game for being clunky and unpolished the mechanics do handle fairly well outside of the tutorial. The movement is silky smooth and weapons work as they intend to. The jetpack will be one of your main tools as you use this to gain a height advantage and navigate the arenas.

Map design is aesthetically pleasing, and I felt this was the strongest factor of the game. You can tell the developers had put some hard work into this portion. Going back to the campaign missions again, you can play these solo or Co-Op with a friend, which is great if you are looking for some local Co-Op alongside the multiplayer modes. The campaign missions are mainly timed with several differing objectives, games such as King of the Hill style modes, to carrying bombs around the arena. There will be star levels to judge how you fared through the playtime ranging from one to three stars, obviously the aim is to hit the maximum of three stars. There are moments where you’ll be a bit confused or baffled as to how you were killed or what is actually going on. 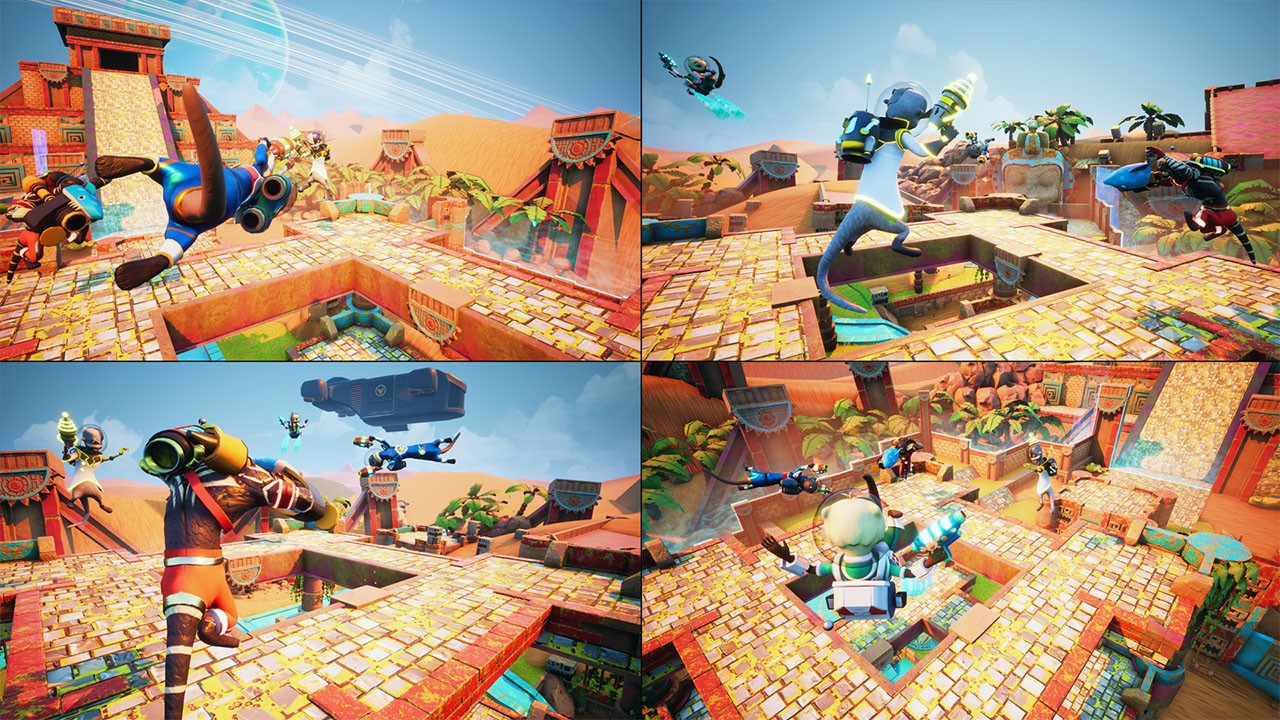 I was sad to see that there was no online multiplayer for this whatsoever, though I have been informed that this is something that is on the cards so watch this space. Local multiplayer is where you’ll have the most enjoyment with friends, there is a plethora of maps and modes to choose from and you can choose to play in two-minute rounds and then switch objectives to keep the game fresh and frantic. This kept The Otterman Empire engaging and extended its longevity, seeing as the campaign mode was incredibly brief. The developers could have maybe extended the local multiplayer modes to cater to a solo experience with AI bots.

The Otterman Empire brings some incredible ideas and a satisfying mechanic system to the table, but drops the ball in a lot more areas that I would have liked. Whilst the campaign mode was enjoyable it was extremely brief and without friends sat with you, this is where your gameplay experience is likely to end. An online multiplayer aspect on launch would have given this title a huge lease of life, and I sure hope it gets introduced at some stage. It is a real shame that the clunkiness and lack of polish wasn’t ironed out prior to release as this would have given some exceptional first impressions with a little more work. Understandably, I believe this is the first stab Tri-Heart Interactive have made with something of this size and it isn’t a bad game at all. For a small team from Manchester, UK, my home city by the way, they should be very proud of their first outing to a very competitive market.

The Otterman Empire serves up a third person shooter which can be played solo or local multiplayer, however, its lack of anything beyond a brief campaign shortens the shelf life if you don’t have your friends close by.