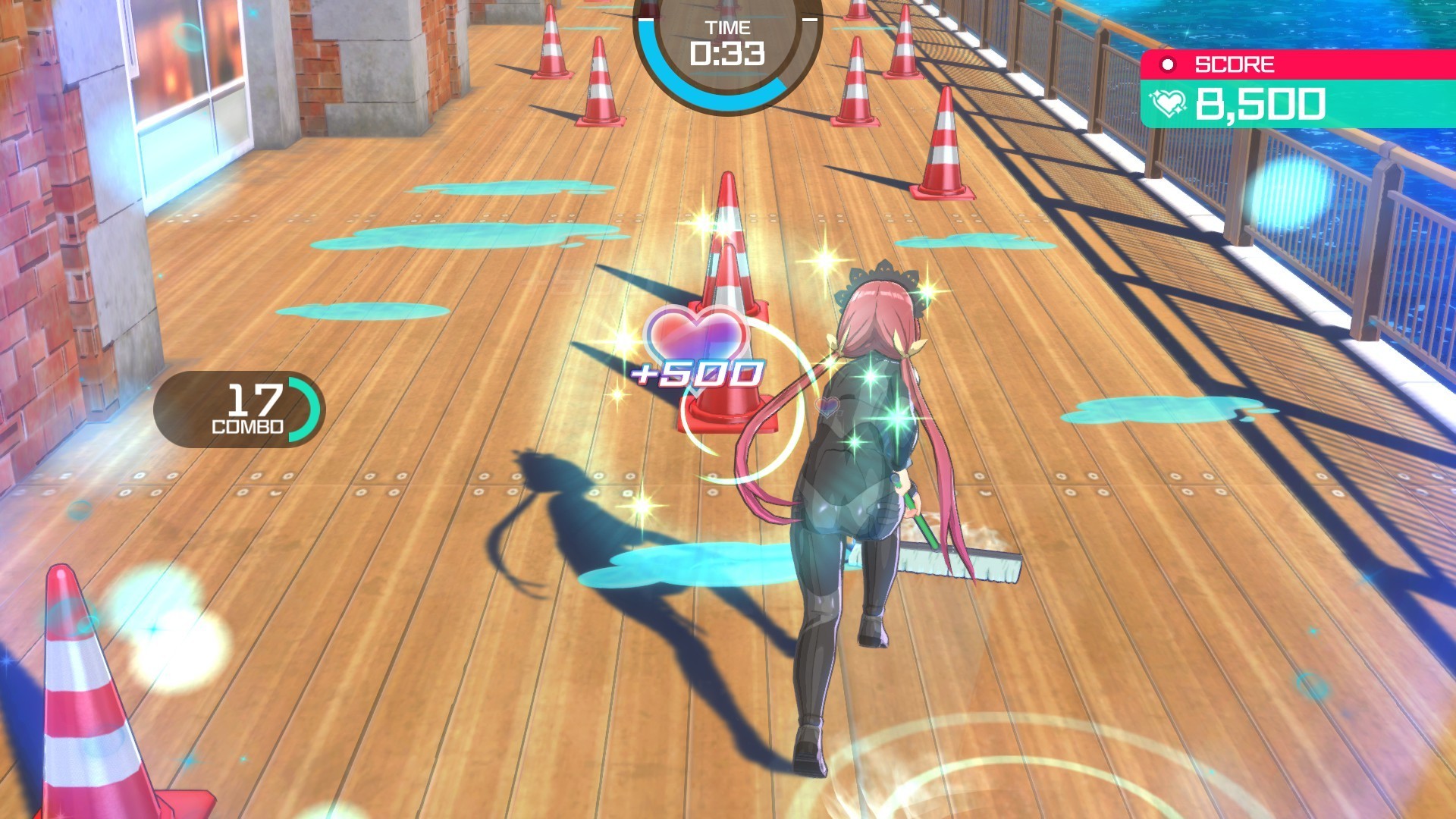 Kandagawa Jet Girls is a new racing game from Honey∞Parade Games, a company led by Senran Kagura series producer Kenichiro Takaki. Much like the Senran Kagura games, Kandagawa Jet Girls feature an all-female cast of characters, all of which have a large breast size to appeal mainly to a male audience. This is Honey∞Parade’s first time making a racing game, and despite the fan service heavy character designs, there’s actually some decent gameplay mechanics here.

As you’d expect, the real meat of Kandagawa Jet Girls’ gameplay is found in its races. Each race consists of 2 to 3 laps. There are two characters on each jet ski, and players control both of them as they race. One character is the driver, while the other is the shooter. Driving around is simple enough, hold the R2 button to accelerate, steer with the control stick, and drift with the L2 button. Each course in Kandagawa Jet Girls has item boxes placed at various points and driving through one will cause your shooter gaining a random weapon. There’s a wide range of water gun weapons, including the shotgun, machine gun, sniper rifle, and a grenade launcher. They mainly vary by how fast they shoot, and how long their range is. They can be fired in bursts at opponents in front of you, or aimed either manually or automatically at opponents behind you. Hitting an opponent with a weapon will damage their shield and hitting it enough times will cause it to break and slow them down.

Kandagawa Jet Girls feature a few different gameplay modes. There’s the story mode, the free play mode, the customization mode, and the mini-games. The story mode features a story path for each of the pairs of girls, of which there are 7 pairs. Rin and Misa are treated as the main characters, whose story is unlocked from the start, with other pairs’ story paths being gradually unlocked as you go through their story. After that, playing through some of the other pairs’ stories will unlock the rest. 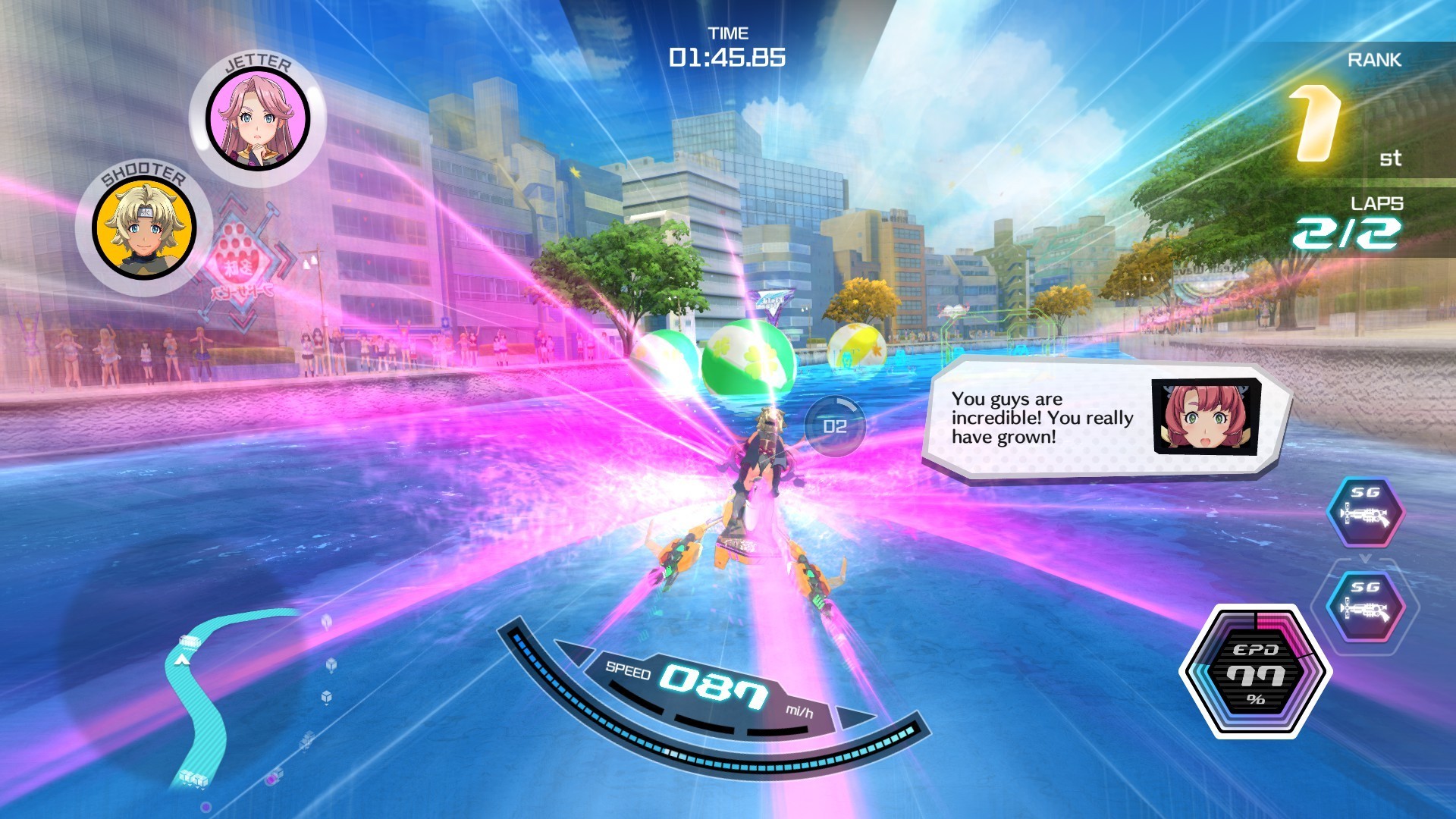 Each of the story paths in Kandagawa Jet Girls comprises two parts, story cutscenes and races. The story cutscenes are in the visual novel format and feature 3D character portraits displayed above text boxes. Each cutscene is fairly short and introduces the next race opponent. After that, a race will begin, where you must come in first place in order to progress to the next story segment. Each race also has three optional missions to complete, such as not using a weapon, or performing a certain number of tricks.

The story mode in Kandagawa Jet Girls has one big weakness though. It’s really easy. The AI opponents barely put up a fight, and you’ll spend almost the entirety of each race in first place with no competition from the other racers. As a result, the weapons go largely unused and feel almost pointless. The story mode could really benefit from having difficulty settings. I’m usually pretty average at racing games, and yet the story races were still a cakewalk for me. Each of the 7 story paths takes around an hour to complete.

The free mode features both Time Attack and Free Race options. Time Attack allows you to choose any of the game’s courses and then race a single lap against a ghost opponent in order to try to set a new best time. There’s an online Leaderboard, so you can see how your times measure up to other players around the world. Free race lets you choose any course and number of laps, as well as the A.I difficulty to give yourself more of a challenge. Even on the hardest difficulty, the A.I barely put up a fight.

Kandagawa Jet Girls’ customisation mode is quite robust, allowing you to change the appearance of all the game’s characters. These changes will apply to all the game modes. Essentially, you can mix and match hair and body types from any of the characters, and then add accessories and change their hair, eye, skin, and accessory colours. For example, you can change Rin to give her Misa’s or one of the other girls’ hair and then recolour it, and vice versa. 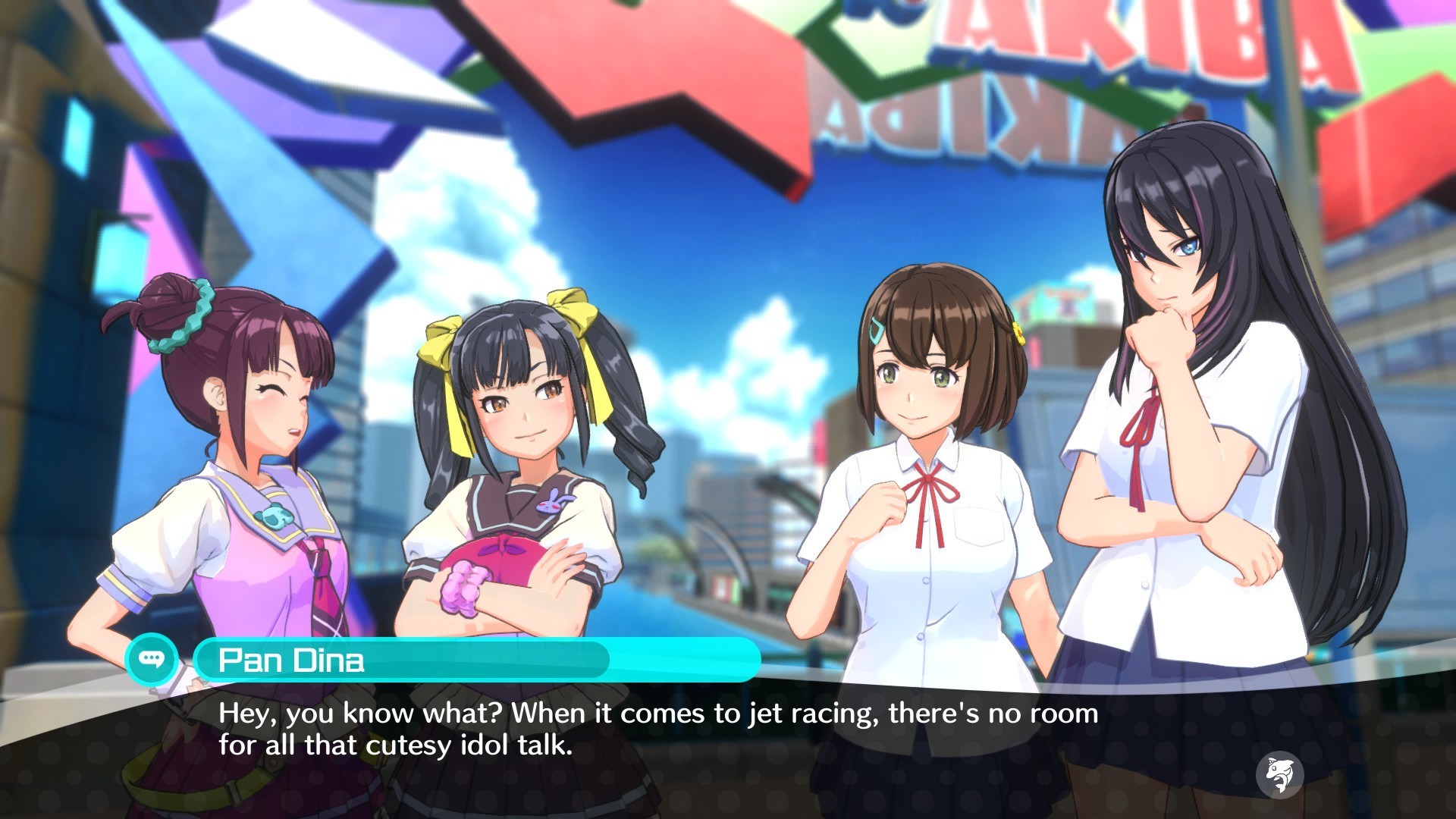 There’s also a shop where you can buy new parts for your jet skis, new costumes and accessories for the characters, new music, and acquire images that were featured in the story mode to view whenever you want. Equipping the jet ski parts allows you to improve their speed, handling, and more. You can customize the jet skis too, adding decals and changing their colour. In addition, Kandagawa Jet Girls also feature a small number of mini-games, which serve as a simple distraction between races. You can earn some extra points to spend in the shop by playing them.

Graphically, Kandagawa Jet Girls is a good effort. There’s plenty of nice artwork scattered through the story mode and menus, and character plus the jet ski models is high quality and detailed. The courses themselves don’t look quite as nice, but they’re passable. The audio is of a high standard, and the story mode is fully voice acted in Japanese. Kandagawa Jet Girls’ music can be surprisingly catchy too, there are some great background tunes.

Overall, Kandagawa Jet Girls feels like a game that had a lot of potential, but unfortunately it never became the great racing game it could have been. The courses are too simple, the difficulty is too low, and as a result, the weapons feel pointless. The character models and artwork are all high quality, plus there are some fun character designs, but it’s not enough to save the game. It’s all style and little substance. It’s a game that’s hard to recommend at its current price, but die-hard fans of the racing genre, or people interested in a very experience may get some enjoyment out of it when it hits the bargain bins.

It’s a game that’s hard to recommend at its current price, but die hard fans of the racing genre, or people interested in a very experience may get some enjoyment out of it when it hits the bargain bins.