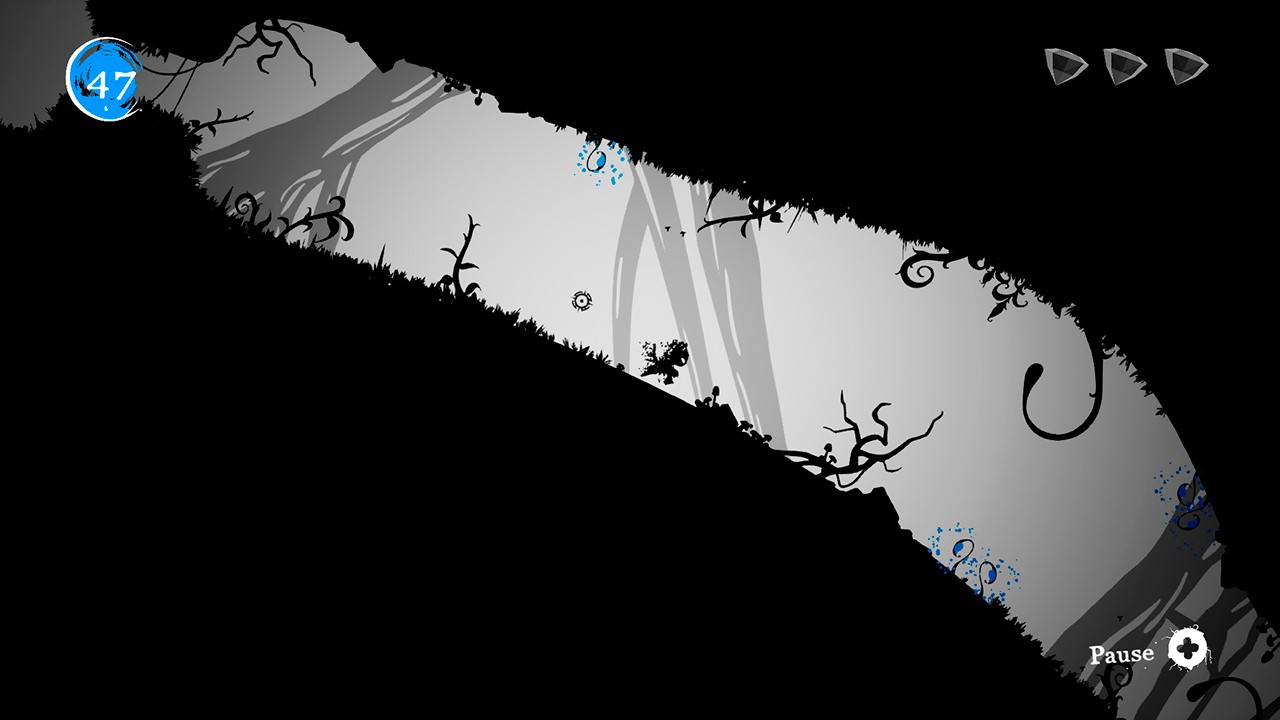 There is always an interesting perspective when it comes to games that play in a certain way for the sake of presentation. I think back to ARMS at moments like this, because it still rankles a bit in my mind as a forgotten opportunity. A great game, playing with motion controls in lieu of the button controls created a better overall experience, as it both helped connect you with the mentality of the game and, in competitive moments, allowed for finer tuning of your punches. More often than not, we see games that take a relatively simple concept and then attempt to elevate it through redefining how to interact with the game. For Wildsphere, they knew that their character, a shadowy non-kitty by the name of Naught, could become something really interesting and engaging, but it needed time. There have been a couple of incarnations of Naught, both on PC and mobile, but the time has finally come for the full rendition of the vision to come to fruition. Thus, we embark on the latest, greatest version of Naught.

The backstory of Naught is depressing and told through some imagery that is gradually unlocked the more you play, so be aware that there are some sad tones throughout. We see a young woman in front of a forlorn tree, tearfully laying her cat to rest. Suddenly, seemingly without provocation, the cat now appears to be alive, but drawn somewhere deep under the earth, and distinctly more of a dark energy than feline at the current time. Naught isn’t sure what happened, but Naught knows that there is a journey ahead, one fraught with peril and danger, beset with dark and light on either side and in equal amounts. None of it matters as long as the journey ends where he has been promised: reuniting with her once more. 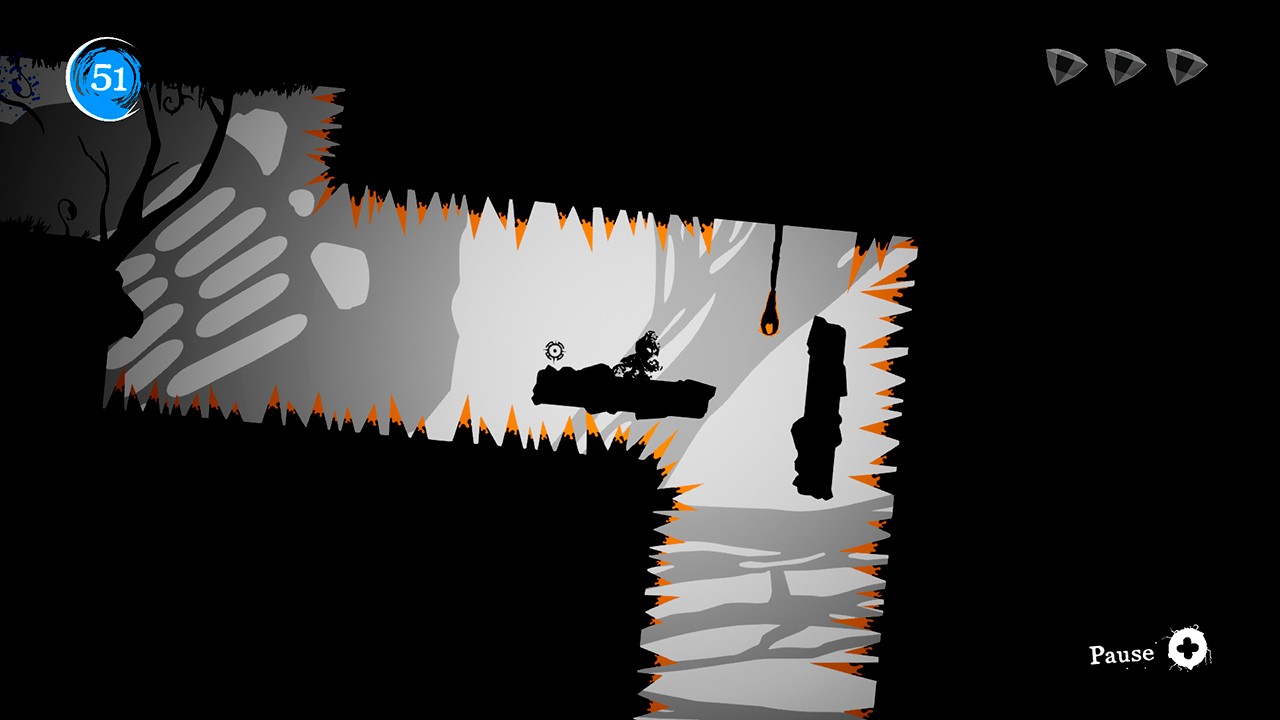 So you’re a dead cat spirit. Not the best place to start a game, but far from the worst. Naught is a puzzle platformer in which you need to get from your spawn point to an extraction exit that lies at the far end of the stage. As you go, there are ghostly blue pickups that can be grabbed, adding up to access to even more areas and information, eventually. Also, there are checkpoints that Naught can hit along the way, and should 100% be hit, because the Underworld is far from a friendly and easy going place. Full of spikes, toxic waters, swinging traps and general confusion, the way ahead would be difficult under normal circumstances. However, Naught isn’t moving in a traditional way: it seems death really turns you on your head, quite literally. Naught doesn’t move forward so much as the world moves around him. Using a unique spinning technique, the player must manipulate the landscape by rotating everything left or right, and, occasionally, smashing the X buttons to completely invert (pull a 180) from where you are. Naught can only jump and try to time out his movement as the very laws of physics twist beneath him. It’s a perilous idea, and one that should only be attempted if you’re seeking to escape the realm of Death and return to someone you love.

From an aesthetic viewpoint, I positively love Naught, and that needs to be given some consideration. While I’ve seen older versions of Naught previously, there’s a lot of detail and love that Wildsphere put into this new reboot of the idea. The shapes and dimensions of everything have been carefully weighed, and the outcome is glorious, especially up on the big screen. Naught has the perfect balance of endearing and foreboding, the result of an echo left upon death that still has shreds of memories and ideas. The landscape is incredibly stark, but peppered with colour that represents hope, danger and promise in equal parts. You quickly learn to identify anything blue as something good, and anything orange as terrible. You seek out the diamonds that hide in plain sight, surprisingly difficult to spot because of their lack of colour, and you get wrapped up into the entire game thanks to a driving, industrial-style soundtrack that mixes the best of driving techno and some very atmospheric synth. The entire package, from a visual and auditory standpoint, is commendable.

The gameplay is incredibly polarizing, and that cannot be understated. From what I’ve read from the CEO, there was a lot of thought and intent given into how Naught would handle on the new generations, and I appreciate it. Using either the shoulder buttons or the directional stick to generate rotation was a smart one, giving both versatility and options. Sometimes you feel like you need to do some fine tuning with angles and having the stick to nudge it is important. In other moments, being able to whip around with the shoulder buttons is needed to thread through moments of terror where Naught feels weightless and helpless, trying to survive the Underworld with the same reflexes as you might have initially had with Star Fox or the more difficult times in VVVVVV.. The jump is something you forget about until you realize it might be the only way to survive (thanks level three!) and the X button to rapidly force a change is critical. In theory, it’s very well designed, and, as long as you’re thinking clearly, the execution is both satisfying and immeasurably difficult. 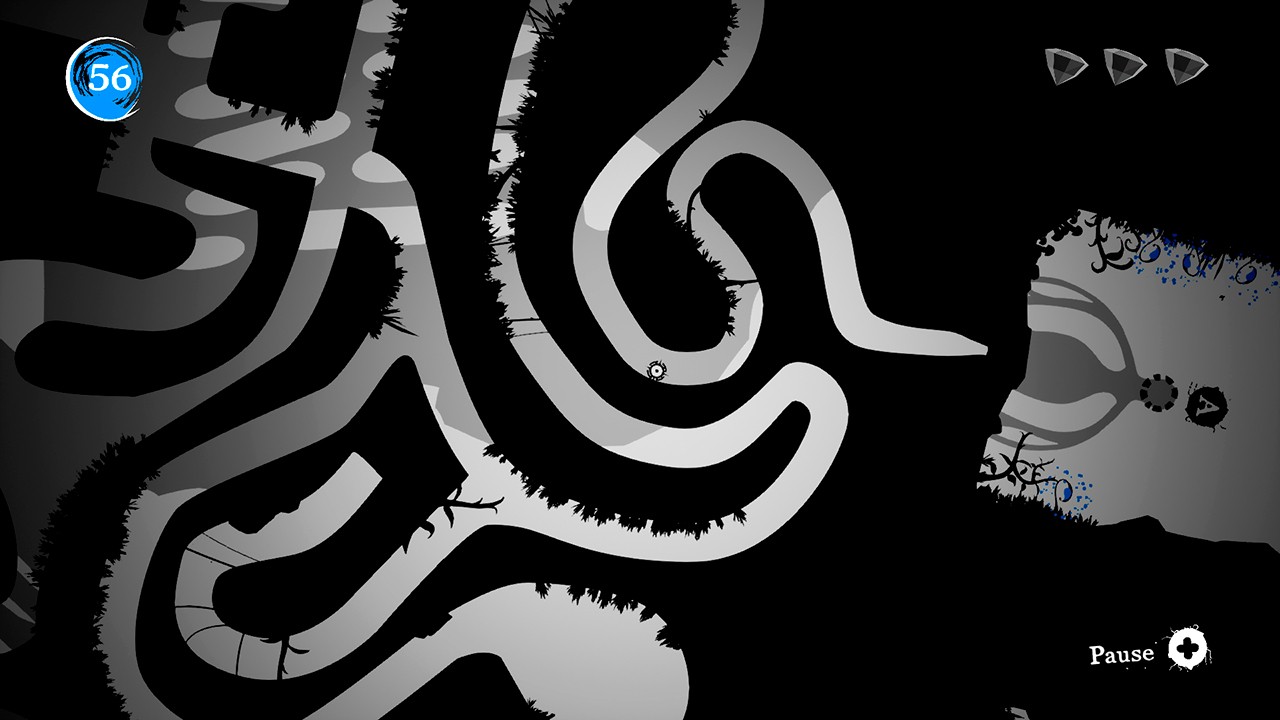 That is, however, the rub: the mindset. When playing Naught, it took me an exceedingly long time to get to stage five. Like, close to an hour for what felt like next to nothing in terms of progression (the game proudly sports 40 levels of madness). Though I got the hang of it eventually, and got to explore some fantastically designed and significantly larger stages, I was shocked at how much time had passed and how little I progressed at first. Inherently, I thought I would have more control of Naught, and that’s because the controls seem to suggest as such. You see, when I play something like Super Hexagon, I know I can spin left or right: that’s the end of it, and I accept that. Naught, however, has moments of jumping that offer some autonomy, but you need to break yourself of that conception. The jump is, instead, an extension of the spinning, more like a hiccup in the flow and not an independent movement. It’s a bizarre ideology that you need to get behind to both progress and also to prohibit utter and total frustration. No one should need to spend a massive amount of time to recalibrate to a game’s preferred play style, so I wonder if something a bit more instrumental would help a tutorial beyond the first level. Since the first level is labelled as, well, the first level, it gives the players a sense of understanding before jumping into the second level, which is significantly harder because of the presence of spikes. Then again, I could be shite at this game and just not accept that. It’s always a possibility.

Naught has a fantastic amount of play, though, and players who might be wary because they saw the name once as a mobile game should really give it a second look. This isn’t some beefed up Android port, it’s a from-the-ground-up rebirth, a brand new look at something that was novel initially and pretty brilliant in current forms. Collect the diamonds, unlock the levels, and witness the story that plucks at particular heart strings if you’ve lost a pet or a loved one. Trust me when I say this: the journey is far from for Naught.

Spellbinding and frustrating, Naught is a sight to behold, and players able to wrap their heads around the controls are in for a fascinating expedition.