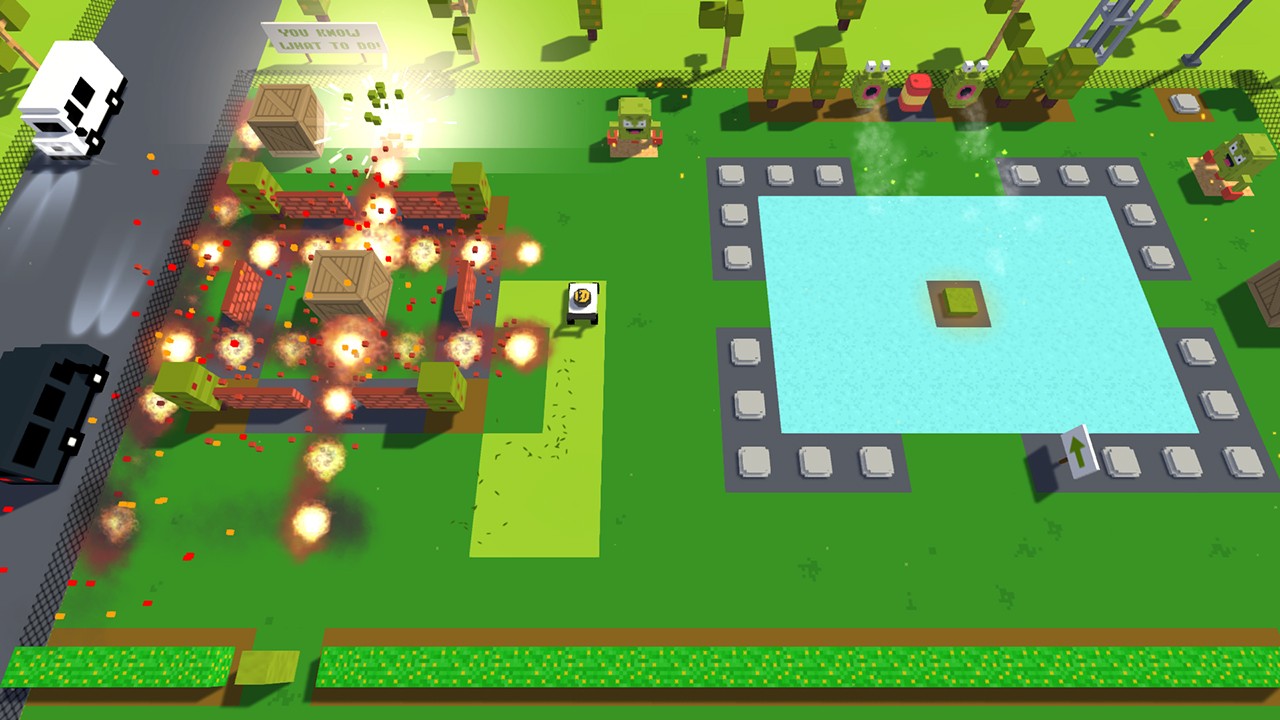 Oh, Sometimes You. This little label takes so many interesting swings with indie games that I never know which direction is up. You’ve got highly involved story dramas, arcade brawlers, bizarre puzzle platformers and everything in-between. Sometimes it’s great, sometimes it’s trash, and, sometimes, it’s just plain weird. But they never stop putting out games, no matter what I have to say about them. That’s admirable. It’s like Pittsburg Pirates fans, and I won’t go any further than that because I know I’ll get a buncha angry emails otherwise. Anyways, this time we’re swimming into the oddball world of lawn mowing, brought to us by solo dev Nikolai Uschev (under the moniker Usanik STD), with Grass Cutters – Mutated Lawns.

At the core of things, Grass Cutters is a snake-like game where you need to mow all the grass on the screen before you run out of battery power. Kudos to the developer for making a lawnmower that runs entirely on electricity: that’s the real discovery here, and I’d like to buy several. Anyways, as you might imagine, things are never as easy as they seem. Often, lawns will have spots of mud or sprinklers that can seriously impair your mowing and even stall you out entirely. If you launch yourself into the pool (because everyone has a damn pool), that could be the end of your mowing career. Oh, and there are scientists who decide to make an experimental ooze that makes hedge golems run around and really screw up your day, because the game wasn’t challenging enough and we needed a plot twist after the seventh level. The game starts out hard and gets harder, so brace yourself, because this is one demanding puzzle game. 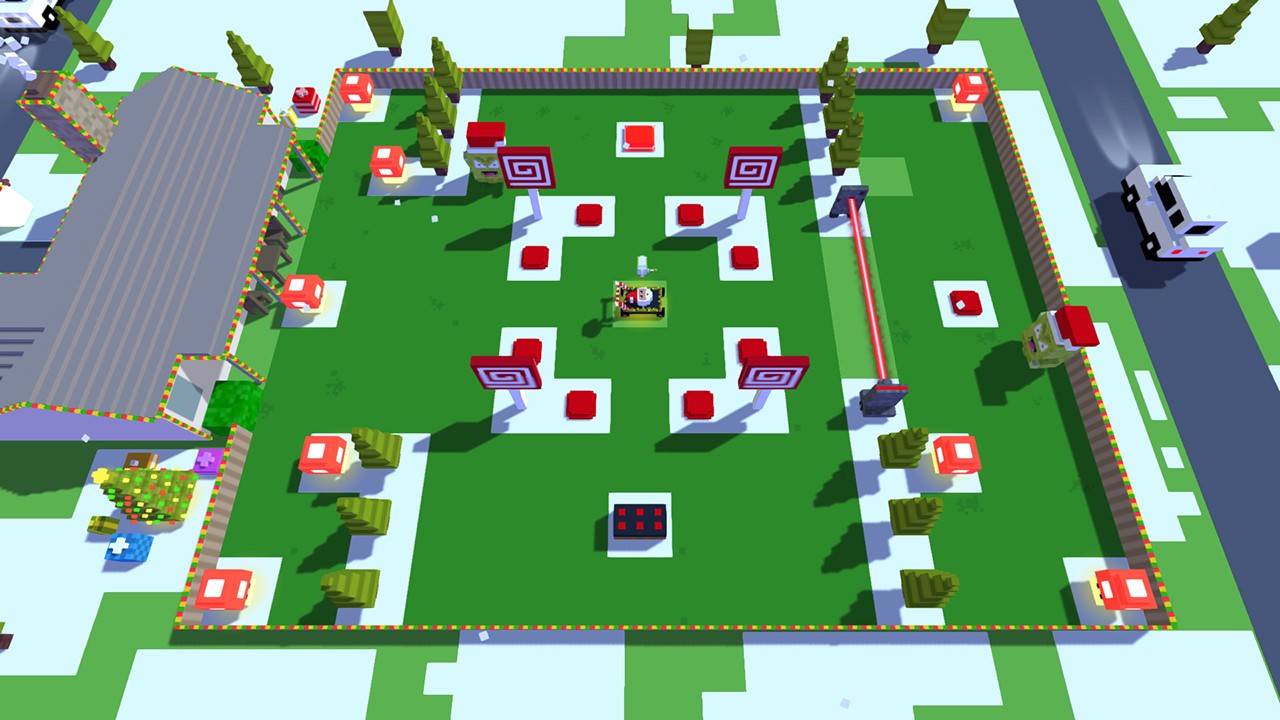 As mentioned above, the mowers of Grass Cutters – Mutated Lawns move in a straight direction without you applying gas or acceleration, so you just need to rotate it in one of four directions to move along and cut the grass. There’s no penalty for running over the same spots that you already cut, so backtracking is totally acceptable. There might be times where running over someone’s lawn fixtures is preferable in the time scape, so don’t be afraid to ruin one part of the lawn if it’s the difference between making the time cutoff for three stars or two. If you’re like me and you’ve started suffering major Joycon drift, I would recommend using the directional buttons to properly steer, because you gotta be able to pivot on a dime to get some hard-to-reach corners. Oh, and you can immediately turn 180 and mow the opposite direction, so don’t worry too much about realism within the game. Also, if you’ve gotten the 8BitDo Lite controller, it seriously is a perfect fit for the blocky action, so bust that out and just leave the JoyCons unpaired.

Graphically, Grass Cutters uses a bunch of chunky pixels that is clearly evocative of the Crossy Roads style, and it works well for what they’re trying to do. The mowers are recognizable but not too detailed, and the pixel work is really nice for when you unlock an animal mower machine. Yes, believe it or not, the number of unlockable vehicles in this game is shockingly high. As you mow, you get gears, both for accomplishing the level, finishing with a certain number of stars, and just picking up gears that spawn on the lawn. Besides the different ability types, you can also unlock visual variants that make this game a real collect-a-thon if that becomes your thing. For example, one of the first mowers you can unlock has the power of invincibility: a temporary, invaluable skill that can let you plow through grass monsters without batting an eye. But which hero do you want? Without naming them directly (because that makes lawsuits), you can unlock a number of recognizable logos that make for a fun and interesting customization. 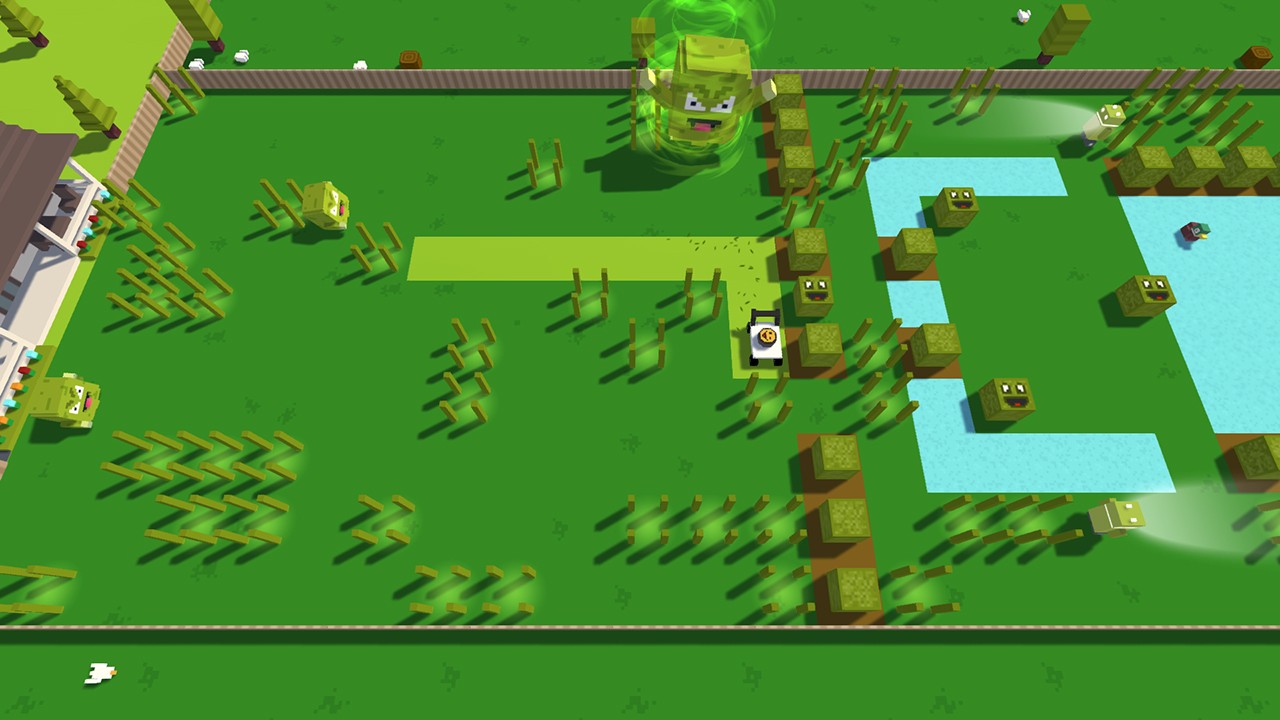 Speaking of powers, Grass Cutters – Mutated Lawns attempts to create a more complex environment by incorporating in these different powers across different mowers, but they’re a real hit-or-miss success. The invincibility spree, for example, can help out with drones and monsters, but only lasts a moment. The lightning strike, by the same accord, can potentially take down several baddies at once, but you have no control where it lands. Each ability seems to be ideal on paper and only rarely executes in a way that makes it effective or even feasible to plan your mowing strategy around. While they’re all cool and add an element of excitement to what could potentially be a simple gaming mechanism, none of them are balanced enough to make someone say “I need this mower to get to the next level.”

When all is said and done, the game ramps up in difficulty in a way you might expect from a mobile game turned console. The first couple of stages are a breeze to get three stars upon (and, as a result, unlock at least two mowers by the eighth level), but, upon introduction of the monsters, the parameters narrow in substantially. You have to make a call very, very fast. Either you’re content with two stars to advance your playing (as you don’t need three to move on), or you’re going to grind out levels again and again, getting the tightest mowing time possible until you can shave the milliseconds down to three star territory. The game isn’t difficult in the sense of understanding or comprehension, but you really need to be tight as a drum in order to make it sing for you on the level you want. Like most mobile-turned-console games, you have the potential to sink hours into this without spending a cent, or to simply burn through it in under an hour, thanks to ads and other inhibitions being removed.

It’s not terrible, I can say that with confidence. Grass Cutters – Mutated Lawns is simple, enjoyable, and gets the job done in terms of entertainment without needing a large investment of time or mentality. If you were going to be on a medium length bus ride, this is perfect to help break things up when you’re bored reading the book you grabbed from Newsday on the way out. But there’s nothing here that makes me shake the average player and scream “GET THIS GAME TODAY!” It’s just an alright, time-passing experience that doesn’t leave the slightest trail in the corridors of my brain. Probably wait for it to drop during the next holiday sale, buff your library and enjoy for an hour.

Simple, repetitive, with enough upgrades and variables to make it interesting but not life changing; in short, a game that is just a pleasant waste of time.