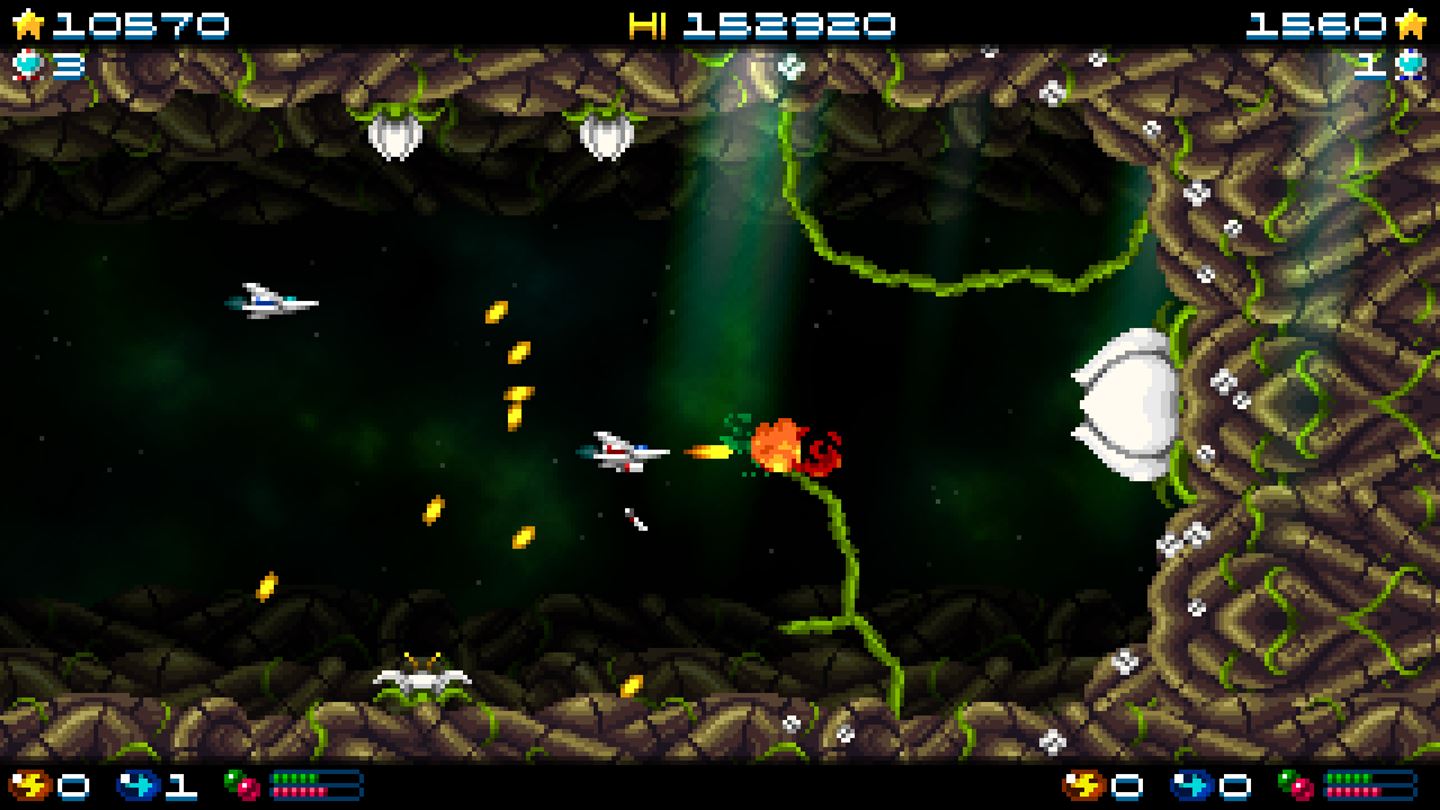 Treasure’s, Gradius V has to be one of my favourite shmups (shoot ‘em ups) of all time. It’s definitely in the top 5 and sits proudly alongside R-Type Final as my favourite side-scrolling example of the genre. Whether it is as good as the likes of Ikaruga or Radiant Silvergun (yep, I’m clearly a massive Treasure fan) is up for debate, but whatever the case, Gradius V represents the high point of an exceptional series, and while it has never been confirmed, the perfect swan song for a franchise that appears to have been quietly retired (Gradius V was released way back in 2004 after all).

It’s a shame as, despite shmups making a bit of a comeback last-gen thanks to the 360’s surprisingly robust library of Japanese shooters and the more recent brilliance of Housemarque on PS4, no other shooter has delivered the kind of deliberate pace and unique aesthetic that made the Gradius series quite so special. Well, until now anyway.

Ok, so Abylight or Locomalito’s, Super Hydorah is more of a throwback with a visual style that harkens back to the 16-bit era, but in terms of gameplay and mechanics, this is pure Gradius. It’s not the kind of visually spectacular sequel that I have been dreaming of for over a decade, but if you’re a fan of Gradius (or shmups in general), you’re going to want to try the largely brilliant if almost outrageously reverential, Super Hydorah. And honestly, me referring to this game as being ‘reverential’ is really a nice way of saying ‘rip-off’. From the design of the ships and enemies to the power-ups and pacing, this really is a Gradius clone in every sense of the word. 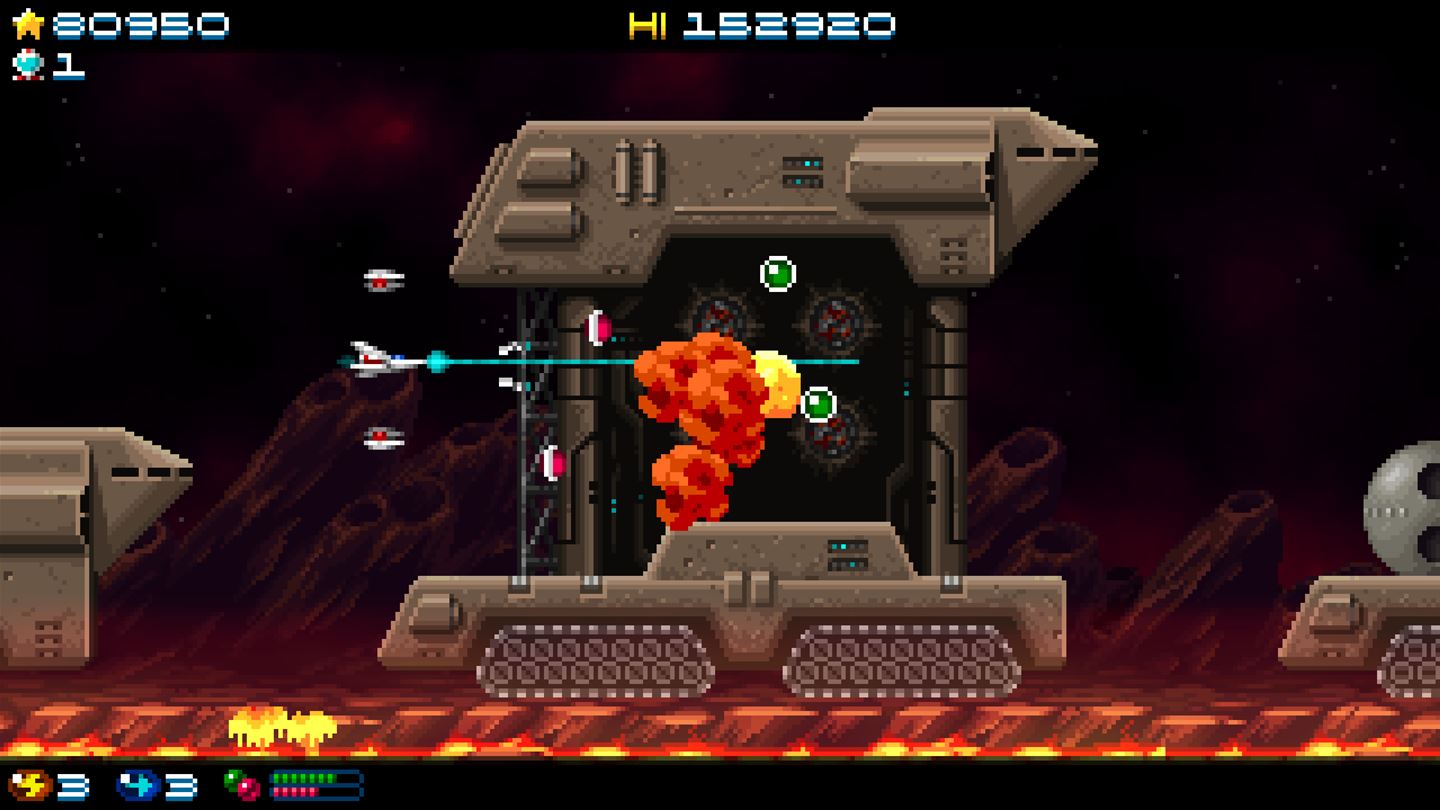 Usually, this kind of duplication wouldn’t necessarily be acceptable, but in a world in which Gradius games are no longer made, I’m more than happy to see another developer stepping up to the plate. It’s a shame that it never attempts to do anything genuinely new with the template with the developer clearly putting veneration above innovation, but as a long suffering fan of the series, just getting more Gradius (even if it’s not technically ‘Gradius’) is fine by me.

Word of warning though; while this is a well-made game with intricate enemy patterns, well designed boss battles and an impressive collection of upgrades, it’s also hard. Really freakin’ hard. Getting to the end of each of the games’ 21 stages isn’t necessarily all that difficult, but beating the boss at the end of them very often is. Unlimited continues means that you can keep plugging away, but if you die with a full set of upgrades (and die you will), having to retry with budget firepower and a much slower ship can often border on the impossible. On a few occasions I just skipped back to the start of the level out of choice, just so I could power up my ship again before the next encounter. I’m sure loads of players out there will breeze through the game, but as a mere mortal, I for one found many of the boss battles incredibly harsh.

Whether these very deliberate design choices are a problem will of course be a matter of personal preference. It’ll drive some gamers up the wall, but I imagine most interested in Super Hydorah will know exactly what they are letting themselves in for. This is a Gradius clone after all, and last time I checked, Gradius was pretty unforgiving. This is all about old school challenge, and in that regard, it delivers with abundance. 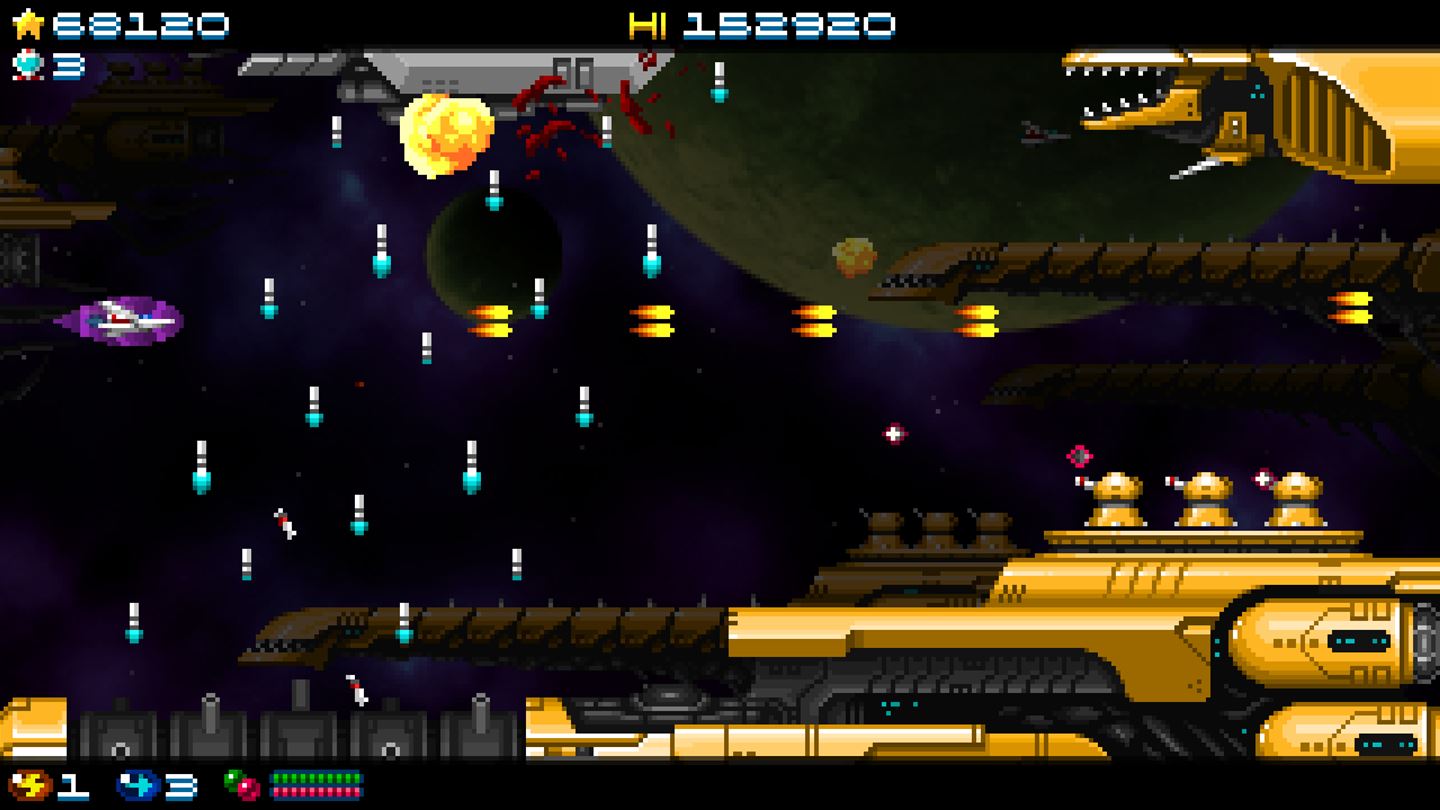 Still, like the Dark Souls of this world, with challenge comes reward; death is rarely unfair, and when you do bring down an especially tough boss, the sense of achievement is nothing short of palpable. Of course, you’ll more than likely have to put up with the relentless sense of frustration that often comes before, but yeah, taking down an especially tough boss in Super Hydorahproves an incredibly rewarding experience.

It’s also much easier if you’re playing with a  friend. The game is still tough of course, but with the ability to revive your space faring buddy in co-op, you can plan your attacks a tad more carefully and thus side-step some of the games’ more potentially maddening moments. If you are in to co-op, you can also try out Super Hydorah’s far less stressful and really rather bonkers, Robot Chase mode. This has you picking up jellies of all things with the aim of the game being to keep your ships close enough for your laser link with jellies only attainable if your link is within a certain distance (obviously). It’s short-lived fun, but it’s fun all the same, and as long as you have a friend in tow, provides a welcome alternative to the punishing difficulty of the core experience.

It is derivative by design, and developers, Abylight and Locomalito probably show a tad too much deference in their commitment to creating what is essentially a retro sequel to sit alongside the 16-bit era Gradius games, but despite its lack of new ideas, this remains a fine homage to a series that has been criminally underused by its parent company. It’s not exactly the Gradius VI I’ve been waiting for, but I’ll happily take a shooter that delivers the kind of slower-paced shmup action that we’ve rarely seen since the release of R-Type Final, and yes, Gradius V.