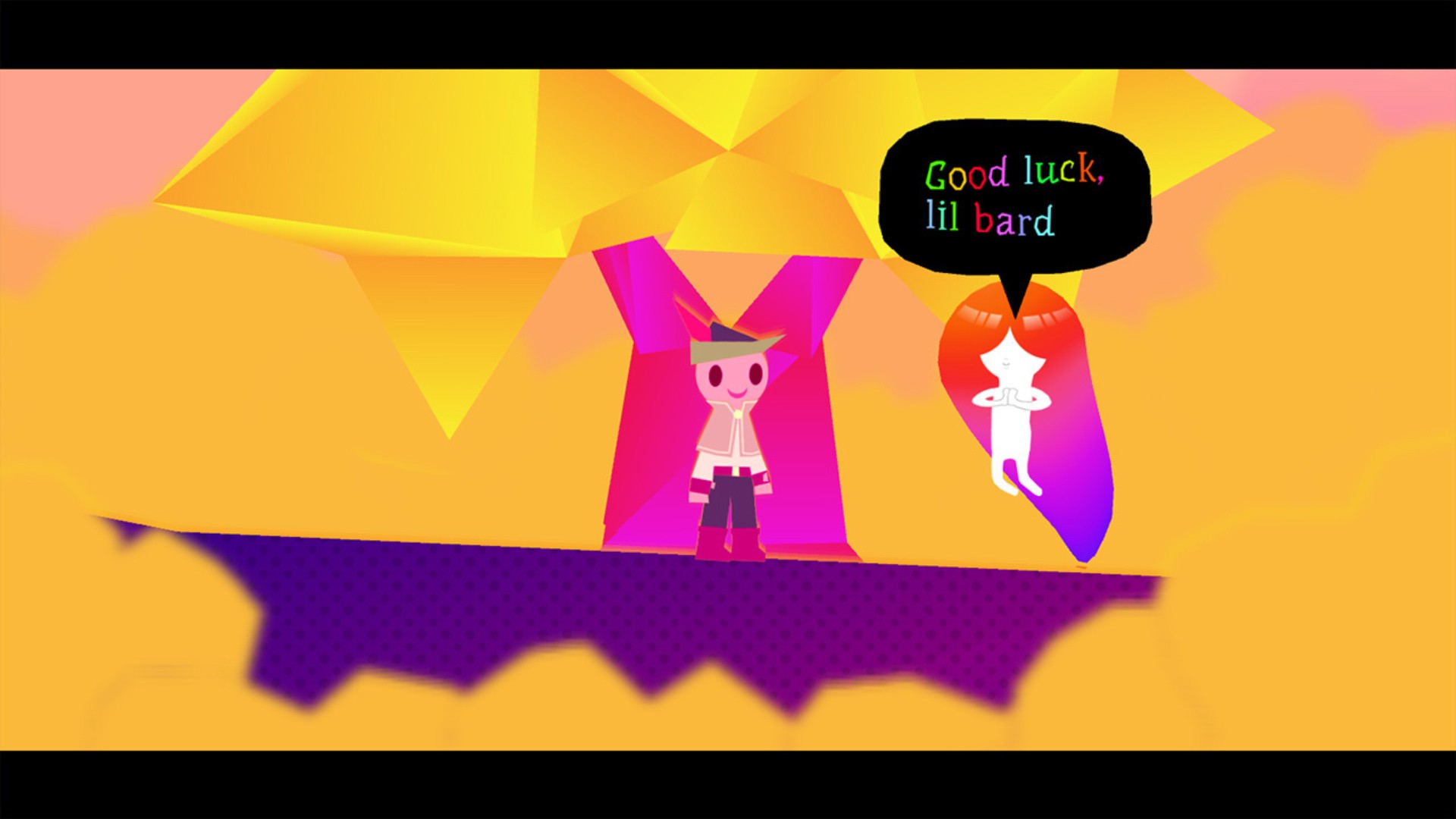 Wandersong a puzzle adventure game developed by Indie developer Greg Lobanov. It is as wonderfully colourful as it is odd. A far fetched musical adventure that will have you singing and dancing your way through a doomed world.

You are welcomed by a dream, a premonition if you will. A spirit advises you that the goddess Eya wants to balance the universe, and your existence is now doomed. If the world is going to end, you want a hero to step forward and save all mankind. A knight, a wizard, heck, even a priest will do, but none of these classes are available as up steps the unlikeliest of heroes, a Bard. Not exactly what you want is it? Someone who is on par with a court jester! How on earth will an entertainer help to prevent the impending catastrophe?

In a game where everything looks like it’s falling apart, only the kindness of your fellow man will help you through. Work together to resolve the issues, if one falls, you all fall, and you must get up and stand together. Wandersong is as much a puzzle adventure game as it is a tale of warmth and friendship.

At first glance I noticed similarities to both, A Short Hike developed by Adamgryu and Night in the Woods developed by Infinite Fall. The freedom to move around the world at your own pace, to explore and take in your surroundings reminded me of a Short Hike. The use of the multilayered paper backgrounds which cleverly transport you to new areas, and the interaction with NPC’s is reminiscent of Night in the Woods. Wandersong is definitely more focused on the puzzle aspect, with a use of an unusual singing game mechanic, this provides an interesting twist when trying to solve the challenges. 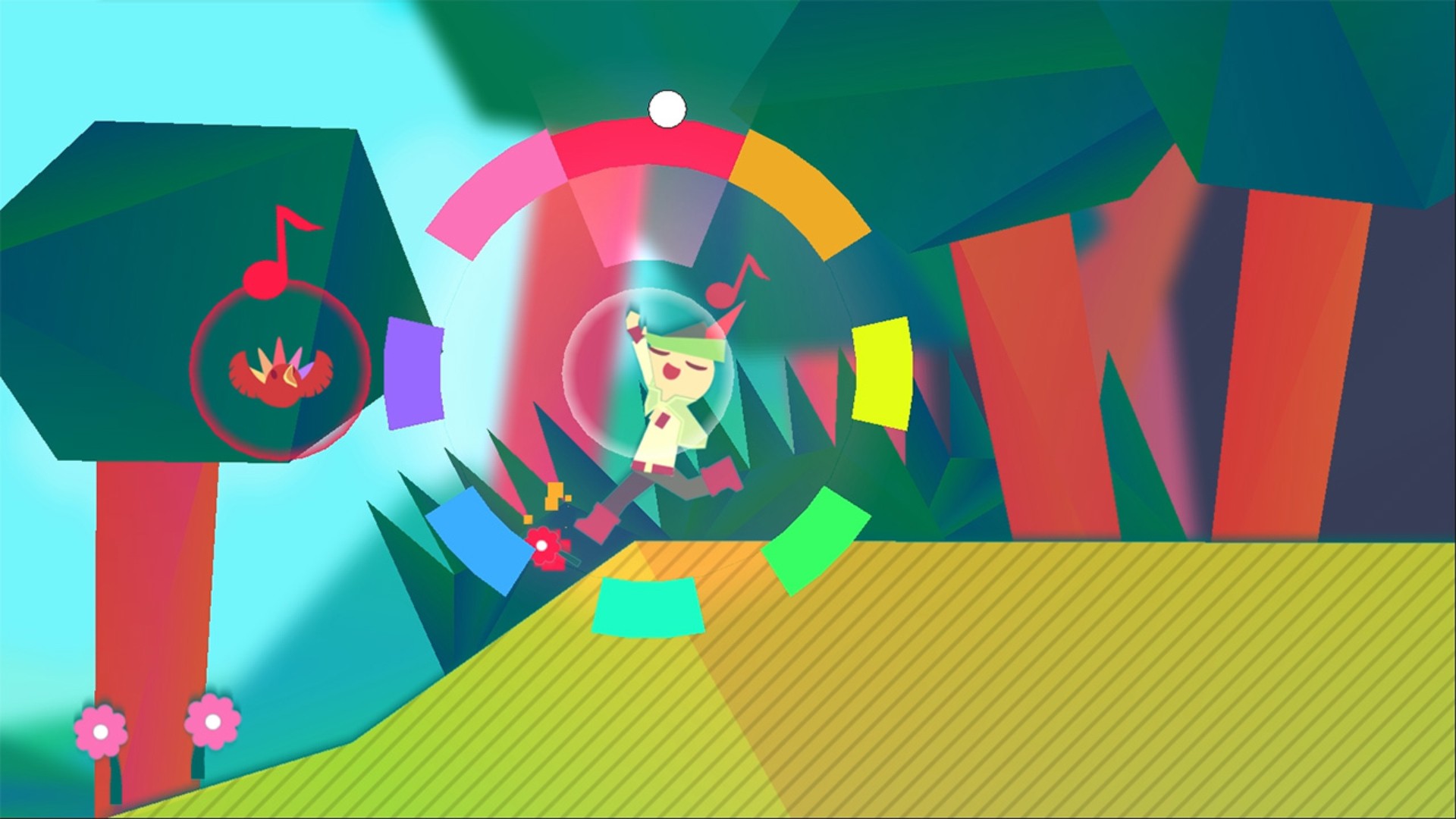 Bard has a heart of gold, he doesn’t want to let the world down, he is determined to fight for its existence. A legend tells of a song that will unite everyone, the Earthsong. The only problem? No one has ever heard it. Your quest begins, you must hunt down the pieces of the missing tune, 7 chapters await you in this colourful, musical side scrolling adventure. Can you learn the unheard ballad? Will you be the hero that overcomes Eya’s song that will destroy your existence whilst making a new universe?

The majority of the tale is explored using 2 main characters; Bard, the ever chirpy and optimistic hero, whom you have complete control over, and his NPC companion Miriam, the defeatist witch who only sees the negative in life. This yin and yang relationship really balances the travelling duo out, as the story progresses Bard’s infectious joy of life rubs off on Miriam, and all of a sudden things don’t appear to be so bad.

Wandersong’s main gaming mechanic is Bard’s singing, this is controlled using the right analogue stick. As each note is selected an associated colour is shown. This method is used to defeat enemies, grow plants and call for assistance from a white dove, who is clearly a lot stronger than he looks. Like a number of games that use rhythm puzzles, this one requires the use of both sound and timing to ensure that you complete the challenges. Failure with any of the puzzles, or falling into a chasm is not welcomed with a heart wrenching game over moment. No! You are gently placed by the offending pit or you are asked to retry the puzzle. The dumbing down of puzzles is usually a bugbear of mine. I’m a firm believer that you should be stretched and made to work for your reward, however Wandersong is going to be the exception to this rule. The ease at which this unique game mechanic is mastered and utilised ensures that the game is accessible to all.

Like in the TV program “The A Team”, Bard doesn’t want to kill enemies, no, Bard only wants to bring people together, not drive them apart. As the game progresses, you are gifted with unique dance moves. Although funky and fun to perform, they have no bearing on any element of the gameplay. I enjoyed many moments of aimlessly singing my heart out, whilst entertaining the local villagers with my newly acquired moves. Their blank expression said it all, at least I was amused. 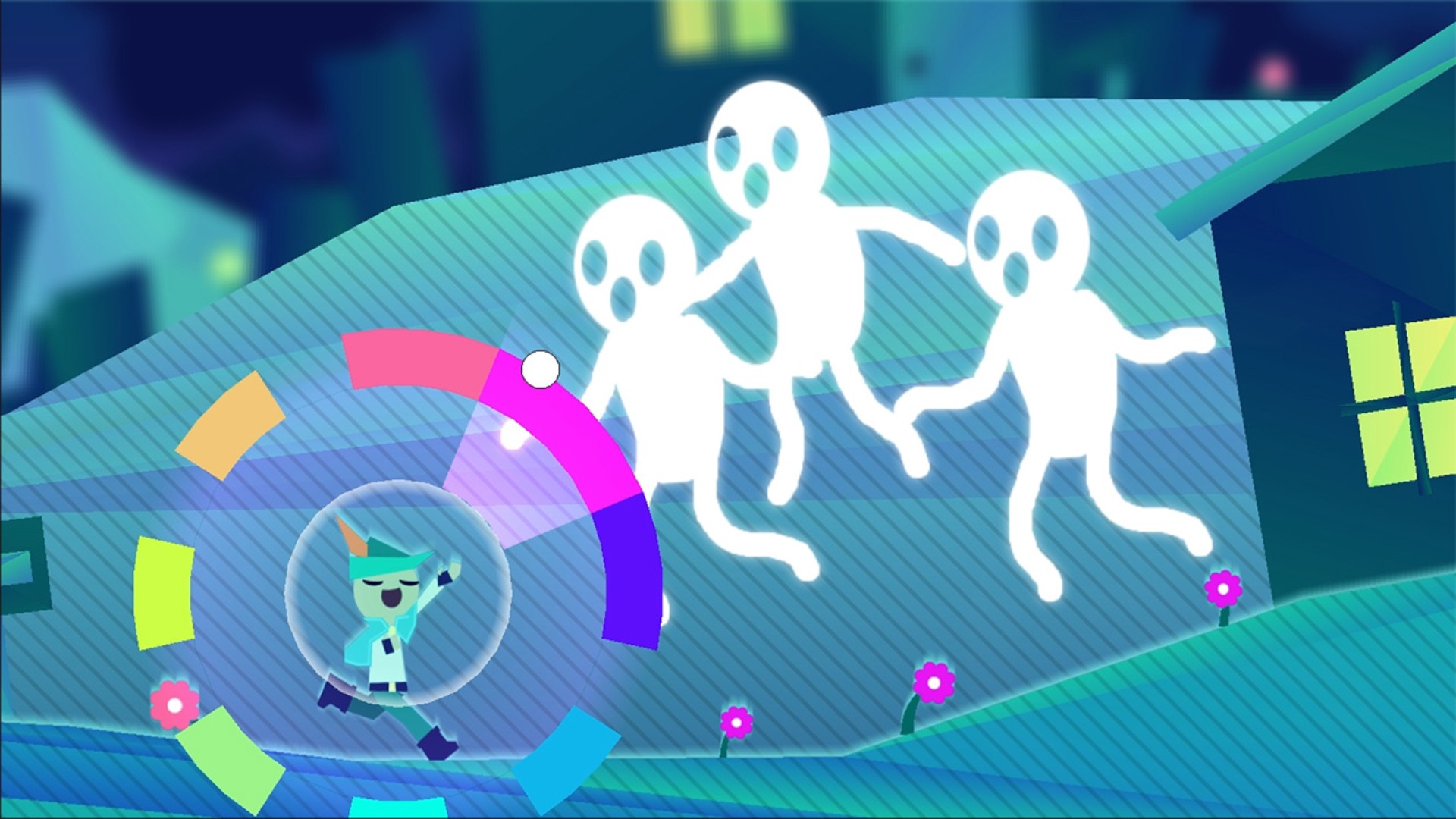 As well as being a fun and touching game to play, it is also beautiful to look at. I don’t mean in the conventional AAA rated game which makes landscapes jaw-droppingly amazing, its beauty is due to its unique style and the colours that have been applied. It has crisp lines and reminds me of an early 90’s cartoon. Every single aspect was a joy to be around. A colourful explosion that matched the titles heart warming theme perfectly. As the atmosphere of any act changes, the screen is washed with a colour that reflects the emotion being played out.

A game that is all about singing is going to have to be clever with its audio. Background music plays gently as you wander the levels, you hardly notice the upbeat tones. The music, like the art style, is a match made in heaven for the game’s heartfelt theme. With a number of catchy tunes, you’ll find that the songs will be stuck in your head long after you turn the Xbox off. There is no spoken narrative throughout, and I believe that this is a good thing, the additional sound would have been distracting, the conversations that you have with the numerous NPC’s are perfect with the text being short and light-hearted.

In my time in this beautiful, yet bizarre, world I found very little to be critical about. I know that this will not be a game for everyone. The developers desire to create a game that highlights the best in people and shows that working together is for the greater good, will not go down well with the cynical player. If I could change anything, I would want the game to be longer, and with any game that you really enjoy, a sense of a sequel would have been nice.

In a truly bizarre tale where the unlikely protagonist, a singer is charged with saving humanity, Greg Lobanov does a wonderful job of creating a whole new perspective on the genre. With very little negativity, the overwhelming message portrayed is that working as one is better for everyone, even when people say that the task is impossible. A game that makes me genuinely happy to have experienced it. It’s one of those warm and fuzzy, I’ve just stroked lots of puppy moments that stays with you for ages. A beautifully touching game that is well worth the effort, an Indie title that will not leave you disappointed.

The world is doomed, a hero is needed. Up steps the unlikely man for the job Bard. His persistent optimism and love of singing will unite the world. Will the Earthsong be sung? Only time will tell.