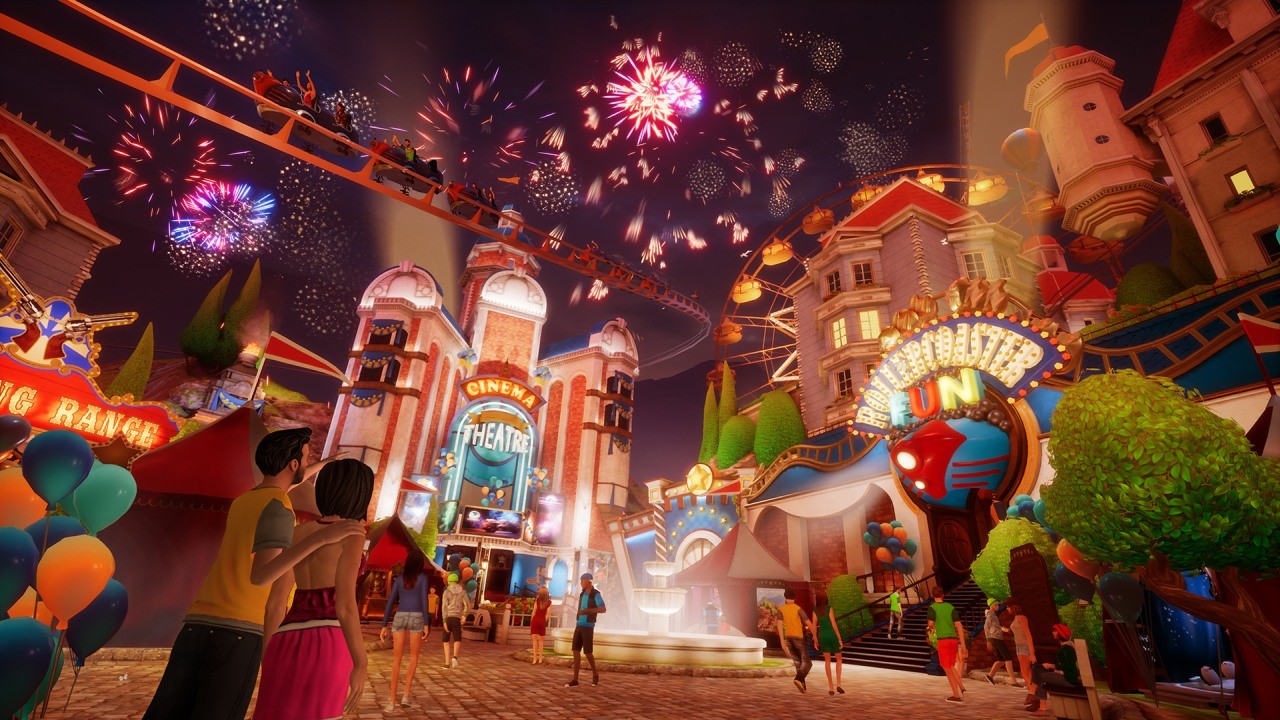 Visiting a theme park is a very unique experience and trying to replicate it well isn’t an easy task. Push too hard and it feels forced and lifeless, too soft and you don’t get any sense that you’re in a fun-filled environment. Finding that sweet middle ground is key to feeling engrossed in the environment and finding the fun in the attractions on offer. Where then, on this spectrum of investment, does Summer Funland sit? Thankfully on the finest most point that, despite length and some minor technical issues, it gives a genuine sense of immersion and overall fun to visiting a theme park in VR. From the main menu, Summer Funland is vibrant and visually colourful all around, the picturesque setting of an island theme park really gives the environment this sense of buzz and excitement. Those who wish to pick up Summer Funland should know that it requires the use of the PS Move controllers, as most all of the games on offer will require you’re total interaction. Thankfully, Summer Funland does offer a selection of comfort options for players, meaning those who aren’t yet accustomed to VR activities won’t feel left out. During my own time with Summer Funland, I played stood up primarily and sampled the sitting down option on a second go through (however the former is what I would advise and I shall explain later).

Entering into the island of Summer Funland proper is a very straight forward affair, you are dropped at the gates and off you go. Unlike other carnival VR experiences, you are able to freely roam and interact with the whole environment rather than select each game from a static position, you are given free reign to explore the whole park at your leisure or teleport to a game of your choice using the information board as you walk in. While you can travel to each game yourself, the Balloon ride game can only be accessed through the information board, the rest are within walking distance and it’s in this environment that the developers really breathe life into Summer Funland. Other park goers wander around, children are scrawling on the floors and a plethora of interactive objects are scattered around such as gumball machines, popcorn machines and throw-able objects a plenty. Honestly the level of interactivity outside of the games is incredible, practically everything can be picked up, thrown around and eaten.

The park attractions themselves are the main draw to Summer Funland however and the variety on offer is fairly solid. You’ll find the classics on display; whack-a-mole (or penguin in this case), skee ball machine, shooting range and a roller-coaster. Other mini-games take a slightly altered approach to classics, such as the carousel on the beach that hands you a magic wand and tasks you with stopping tornadoes as fast as possible. Or we have a garden maze, except the real maze puzzle lies inside the garden as a collection of connect the dot line tracing puzzles. Of all the games featured in Summer Funland, this will no doubt offer the most challenge as the lines are very thin and some of the later puzzles demand you to alter your perspective entirely to finish them. Sadly this was also the most frustrating when taking the PSVR hardware into consideration, the light tracking from the PlayStation camera would frequently cause my in-game hands to shake wildly causing the light beam to go outside the lines and start from scratch. The later puzzles of this area became wildly more difficult, meaning I not only had to contend with the hardware, but these truly perspective bending line tracing puzzles that ultimately lead to nothing of value. A “To Be Continued” screen appeared once they were all completed, so it seems the developers intend to add more in later, hopefully as a free update. 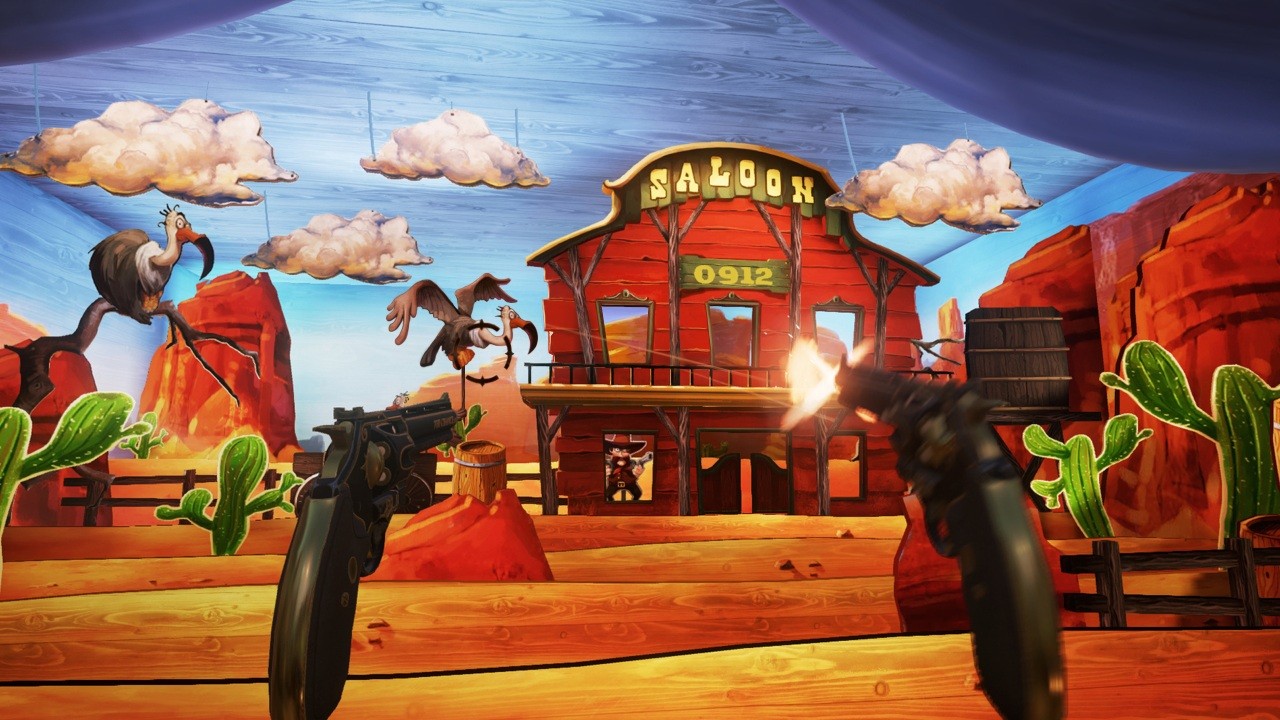 The more engaging and bizarre games Summer Funland had to offer featured a climbable lighthouse (a personal favourite), a Fruit Ninja style cooking arena, a futuristic ping-pong cage and a candy stall that shrunk you down and made you play badminton with gumballs and a lollipop as the racket. All of these games really made great use of the tracking features within the headset and controllers. In my time with Summer Funland though, it was made clear that these are best played while standing up (if you can stomach it) as while they were entirely doable seated, too many times did I catch the couch or floor when swinging my lollipop racket or ping-pong paddle, whereas the only issues I faced while stood were when I tried to reach too far down when I wasn’t supposed to.

As far as sound and graphical design, the former outshines the latter, but this is to be expected when it comes to most PSVR titles. But as stated earlier, the picturesque landscapes and bright colours aren’t bad. In fact it’s only when you look into the finer details of the environments and character models do you see the rougher edges, but these don’t impact the overall experience with Summer Funland. Soothing brass orchestration and dedicated sound effects add to the immersion when you travel the park and interact with its every feature.

Ultimately what brings Summer Funland up on the list of worthwhile PSVR titles, is just how fun it is. There aren’t a huge amount of games to play, but the ones on offer are varied enough to keep you engaged and coming back to earn all the stars. It would have been preferable though if gathering the twelve stars actually rewarded you with something other than a different time of day for the park, thus losing a large part of replay value when there isn’t much to do after beating each game or reward for doing so. But when it comes to unique VR experiences, I’ve yet to play a game like Summer Funland where you can take a tense deep sea dive in one area and ride a rainbow unicorn through a kaleidoscope tunnel with a knights joust in another (not joking).

Like a real trip to the theme park, it’s really fun the first time around. Unless these mini-games truly grip you though, it’s unlikely you’ll boot it up again afterwards.