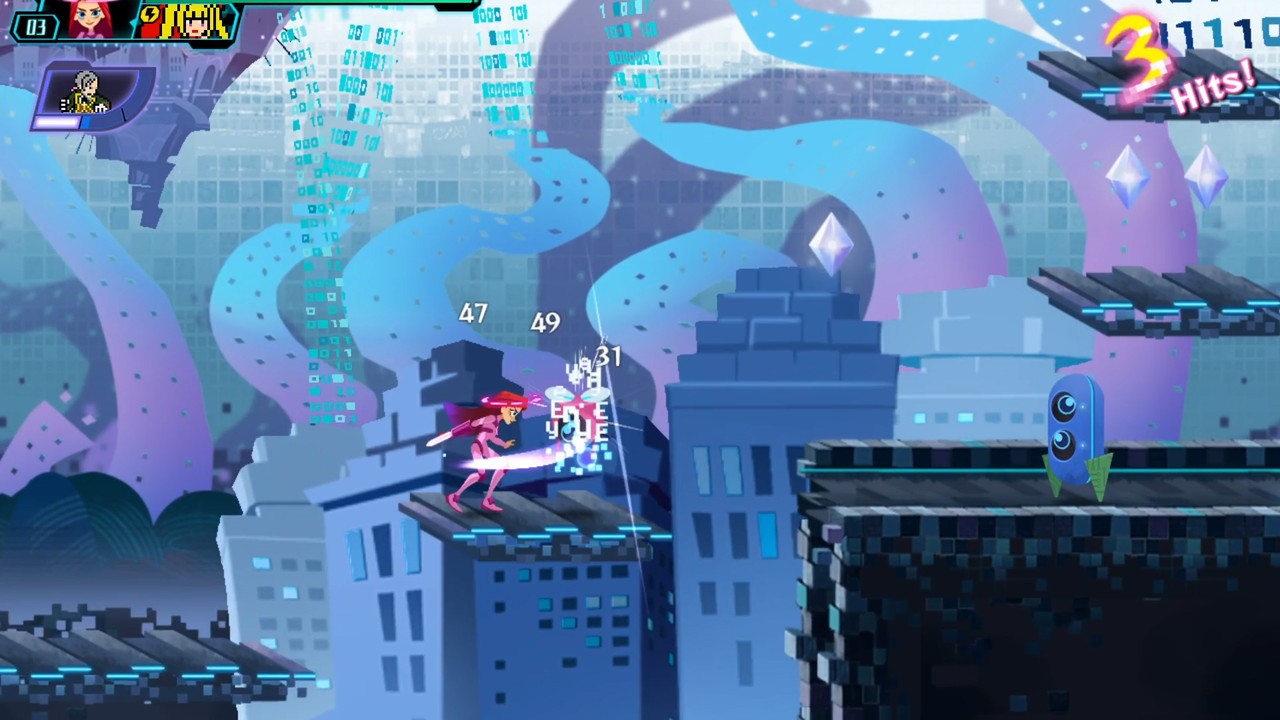 I don’t know about anyone else, but I’m loving all these companies realizing they can take their IPs from totally different, unrelated games and slamming them together into one big mess. Nicalis did a bangup job with Crystal Crisis and Blade Strangers, Nintendo is unafraid to put EVERYONE into a fighting game, and who didn’t love all the weird and wacky announcement of Mario and Sonic at whatever sporting event is happening this year? The fact is, when you decide to add something for everyone, you can either make a massive mess OR make everyone happy. Arc System Works doesn’t always get enough credit for all the games they have under their belt, and I only know most because I’ve played a ton of them. So for them to take a metric ton of these familiar faces from Guilty Gear, BlazBlue, Double Dragon and more, and then just shove them all together into one side scrolling, pixel art and chiptune laden stew, it’s more than my little heart can take.

Code Shifter takes place in the Awesome Rainbow Corp (ARC), a game development company that’s just days away from their biggest launch ever. However, something odd is happening: bugs are cropping up, and not the normal “someone decided to smash their heads on the keyboard again” variety. There’s an oddness that feels more sinister, as if someone is deliberately injecting vicious code. You play Stella, the awesome heroine who has created the perfect tool for bug squashing: Sera, an avatar of her own design that can assassinate bugs and viruses with the greatest of ease. Sera will be sent deep into the code of her fellow coworkers, finding and eliminating conflictions and serious problems that seem to be cropping up more than usual (sorry, Mozzie, it’s not all viruses), and making sure that Colorful Fighters is ready for the big day!

A sidescrolling platformer, Code Shifter tasks Stella/Sera with some very interesting and unusual approaches to gameplay. Sera is a kickass character on her own, no doubt about it, and is able to take on the different bugs, viruses and even nastier surprises on her own. She can unleash a great striking combo, target above and below with jumping and dividing attacks, and does a good crouch move that has a pretty good reach. Moreover, she has a special attack that can bust heads at the cost of a bit of her HP. However, Sera is far from on her own in this game. As a result of the code going haywire, there’s a lot of leftover characters strewn about for Sera to pick up and assimilate, with different results. Picking up Kunio-Kun means being able to transform into that brawler at a moment’s notice, gaining a stronger punch in exchange for losing the double jump. Sera is still the only one who can wipe out the standalone bugs, though, so it’s a good thing you can easily toggle back and forth between the hero you’ve picked up and the hero you naturally are. 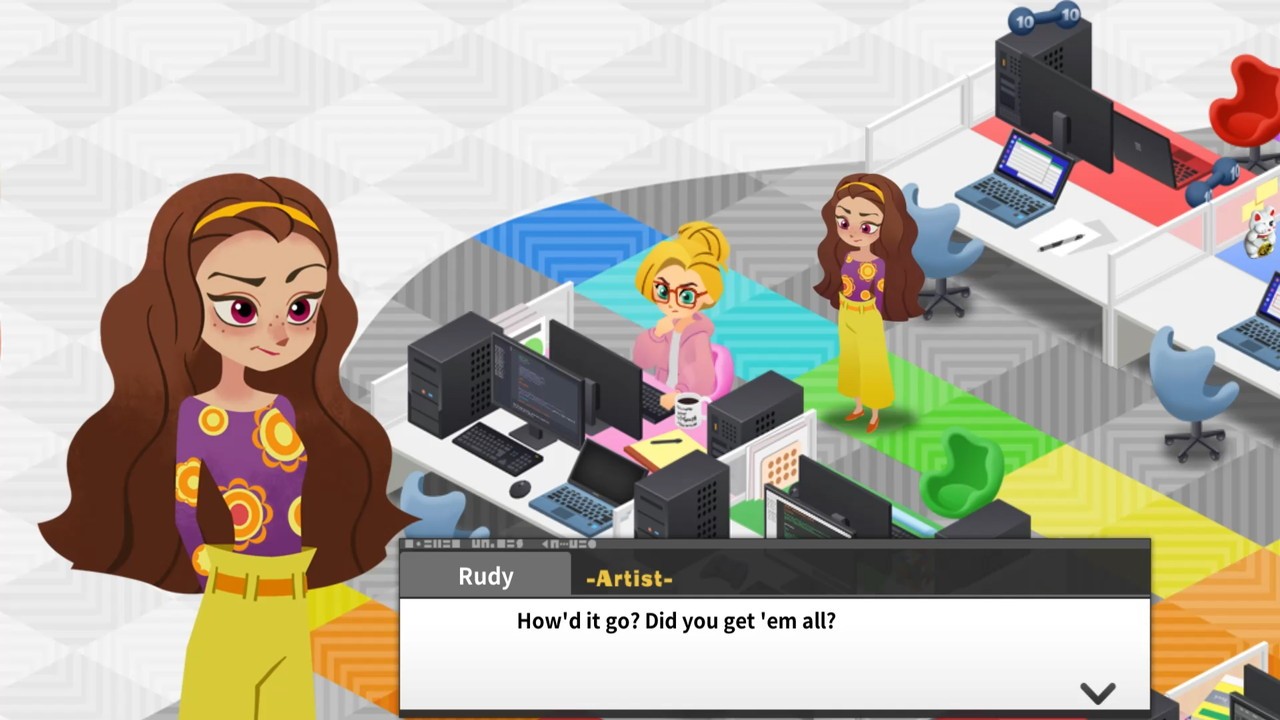 Code Shifter does a great job of utilizing all the different characters that pop up throughout, both as playable heroes and as assists that work as rechargeable spirits to help wipe out enemies on the screen. Not only do you get certain abilities with each of the heroes, they work out in the field in ways that allow for versatility without shoehorning. For example, there’ll be times where you need a hero light enough to ride an updraft to another level: there’s at least four heroes I can think of who can do that job. Sure, breaking through ice walls with Sol BadGuy makes the most amount of sense, but you might be able to find one other hot-headed character to take out the glacial imprisonments. There’s no time limit on the stages, so backtracking to find heroes that you previously had and swapped away can be the difference between a total bug squash and getting almost but not quite. It doesn’t matter as much on the Switch (damn you, lack of achievement system!) but players for the PC, XB1 and PS4 will mind very much to see their trophies unearned. Also, getting the characters means changing the theme music that plays as you walk around, and, while the Double Dragon music is spot on (having come from the 8bit generation), chiptune interpretations of themes from Guilty Gear is pretty sweet. Also, the music seamlessly starts and stops when you transform back to Sera, so that’s a big plus.

As you move forward with Code Shifter, you’ll have opportunities to improve Sera and upgrade her character as long as you’re classy enough to get S ranking on each stage, and this is relatively doable on normal for first timers. If you’re attentive and know where to squash bugs, to smash every chest to find goodies, and really do you best not to take damage, you’ll improve Sera’s speed, strength and HP in no time flat. Going back and redoing the levels on Hard and Very Hard, though, live up to their name, as you never realize how easygoing the viruses were about attacking you until they are far, far more tenacious. Still, grinding out those stages again on higher difficulty levels is a trip, and worth it to get more Sera upgrades for when you move on to the other levels and encounters. Plus, you’ll want more time to get used to the controls: Mozzie’s Folder (each world is divided into folders of other devs) is pretty straightforward compared to everyone else’s, and you need a few times to figure out how floaty Sera’s jumps can be. 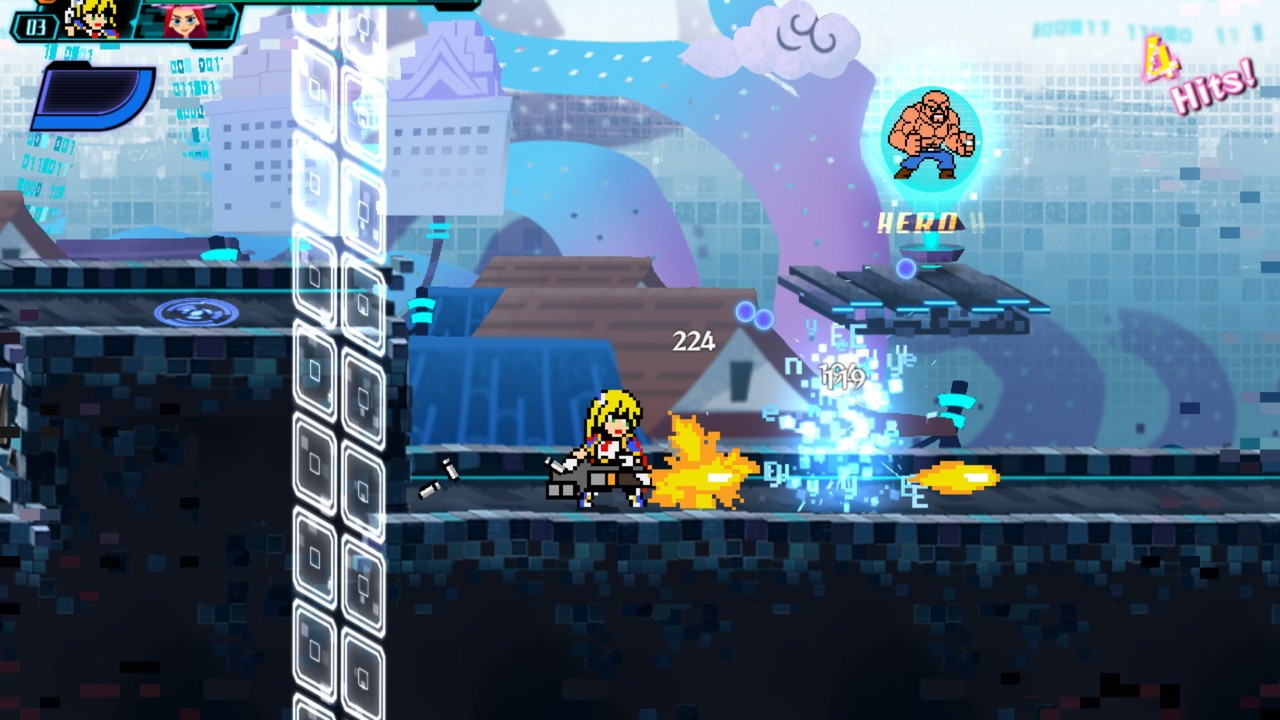 The two downsides to this game are incredibly minor, but they need to be voiced anyways because they do exist. Firstly, the Awesome Rainbow Corp office. For a game that has such beautiful and well designed levels, navigating the office as part of the between game was sort of a nightmare for me. Don’t get me wrong, the office LOOKED great: I loved the way the characters were rendered, the office looks like a video game dev spot back in the early days of the Dot Com boom, it’s a good look. But It’s hard to walk around, so I guess I’m glad Stella stays at her desk for a majority of it. The characters are flushed out in their conversations, it’s fun to chat with the other folk before diving back into bug squashing, but I just felt stiff and awkward walking around.

Secondly, Colorful Fighters. This is the game that you’re designing within Code Shifter, and you can gradually play it on the big TV at the back of the office as you accomplish more bug squashing and unlock other characters. This fighting game is very straightforward, a four character brawl as either stock or timed mode, and the controls are limited to jumping and a singular attack that’s modified with the directions. I love playing this game, and it only gets better the more you unlock characters. You get to rage on three CPU players (or probably other real players) in a tight, clean combat room that allows for strategy, variety, and the ever popular “hide down here while everyone else fights.” However, it’s in the office that I hate walking around, and I feel like I run into the damn sofa every single time just trying to get to the TV. Arc System Works! Please release Colorful Fighters as a standalone game for two dollars OR put a direct link to it in the main menu. I will seriously take either option to avoid trying to walk around that office again.

All of my clearly petty quirks aside, Code Shifter is a dynamite game that I wasn’t expecting. The storyline is gradual, a little pulpy, but it’s a good fit for the vessel of an action platformer that asks for replay and delivers reason to do so. I loved all the pixel art avatars, the game ran like a dream and it looks and feels great on the Switch Lite (RIP my old Switch, launch day feels so long ago). As a result, I didn’t get a chance to do Co-Op gameplay, but this was a blast solo and I recommend it to anyone looking for an old school experience with some new school aesthetics. This game blends everything that I love about classic game design and concept with what we can accomplish with modern hardware and memory, and it makes me a very, very happy dude.

If squashing bugs was this easy in development, I probably would still be making games instead of playing them.