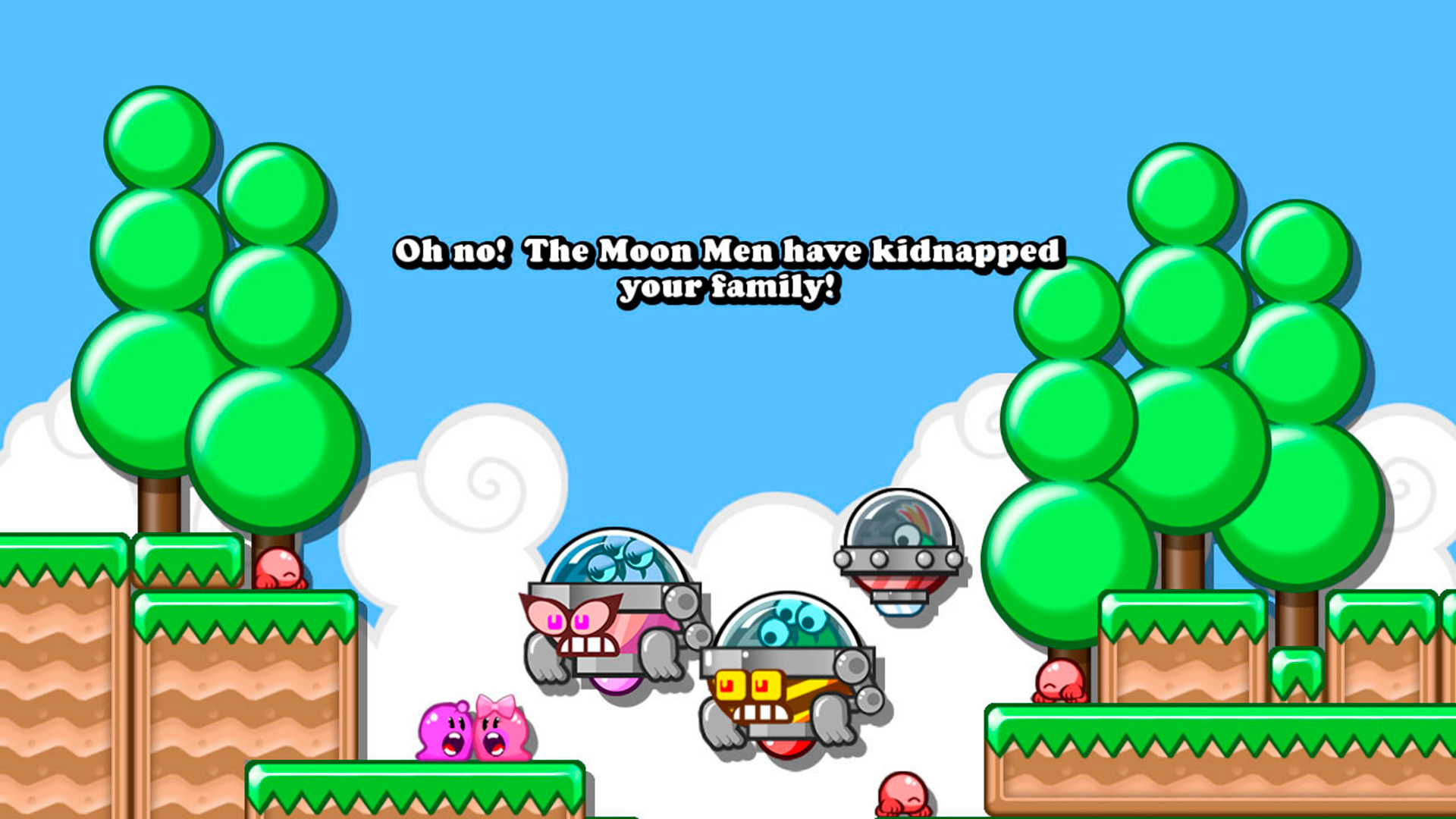 Another week passes and another Ratalaika Games title appears on the PS4. This time Hoggy2 is this weeks entry into easy Platinum trophy territory. I never played the first one so i have no idea how Hoggy2 is related to Hoggy, but this one started life as a mobile phone game. Let’s see how Hoggy2 pans out.

Hoggy2 is a classic platformer containing more than 200 levels. Hoggy is back with Hogatha and kids. Unfortunately the super evil Moon Men are not fans of the Hoggy family so decide to kidnap the slime like children. After the kids have been kidnapped Hoggy and Hogatha fall into the lair of the Moon Men and must make their way through. Throughout the evil domain are jars which you slide down that take you to stages containing fruits. When you collect all the fruits within a stage then you are rewarded with a key. These keys gain you access to other areas that contain more jars to be completed. 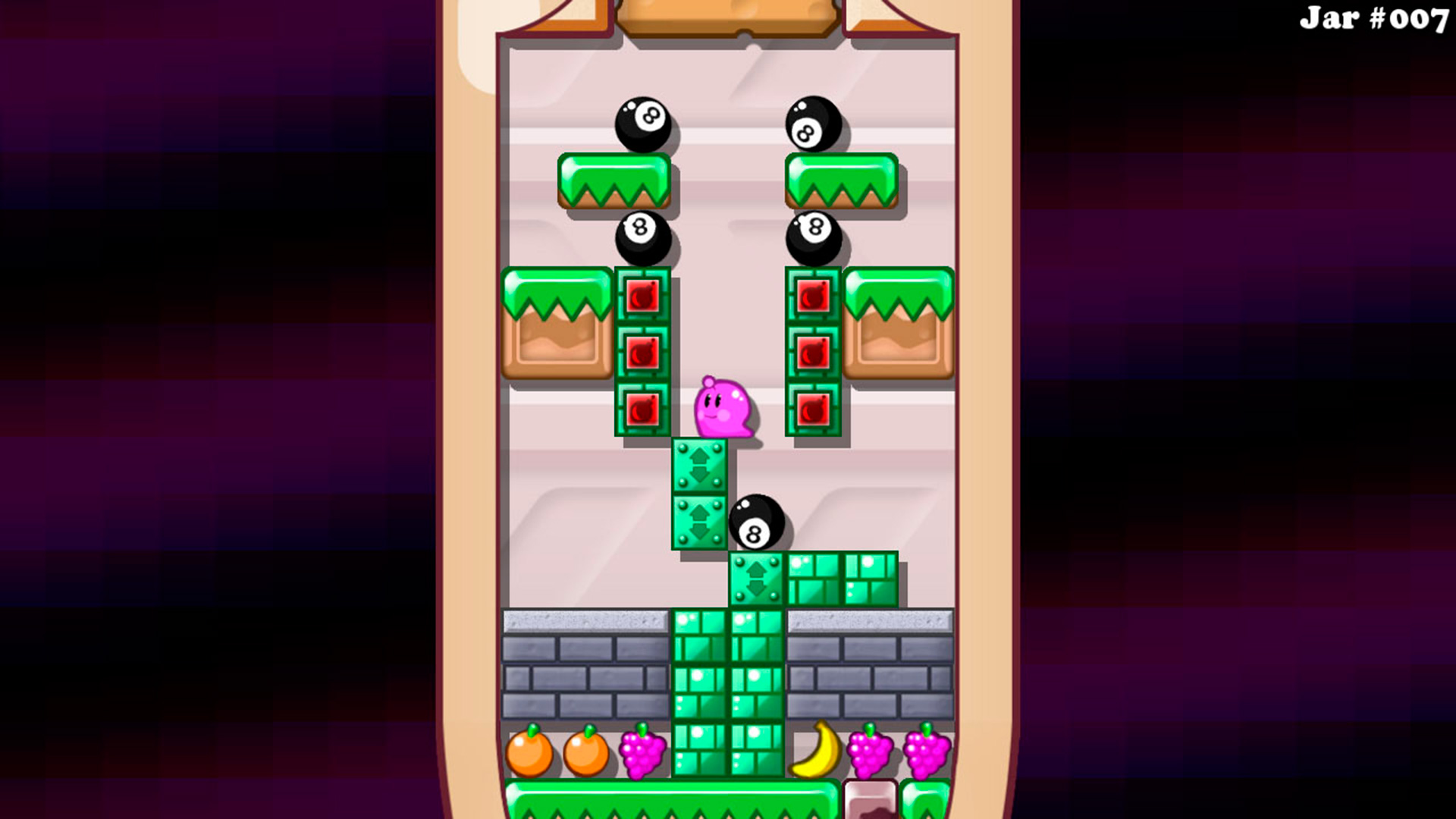 You can play as Hoggy or Hogatha, it doesn’t matter, there are no differences in style or abilities. Both characters can move left or right very slowly, they can also jump which will take you to higher plains, but when you jump, you jump to the ceiling and stick to it. You can move left or right from this position, but to get down you need to jump down. The navigating is the same inside and outside a jar, outside a jar there are no obstacles but inside a jar is more complicated. The early jars are quite easy to get through, they just contain fruit and a few blocks to bypass, as you progress more obstacles appear and stages becoming harder to clear. Stage obstacles include bombs that explode when touched and spikes are a one touch kill. There are a few enemies that inhabit these stages such as spiked enemies that can be used to break blocks containing fruit, jumping enemies, ramming enemies which are again useful for breaking blocks, fire enemies that can kill other enemies, projectile spitting enemies which can kill other enemies to name but just a few.

The most annoying thing in Hoggy2 is a block with skull & crossbones on it, if it’s touched by anyone then you get hit by a boxing glove! Luckily there are some power ups to help you such as the nut that turns you super strong or the chilli that sets you on fire. 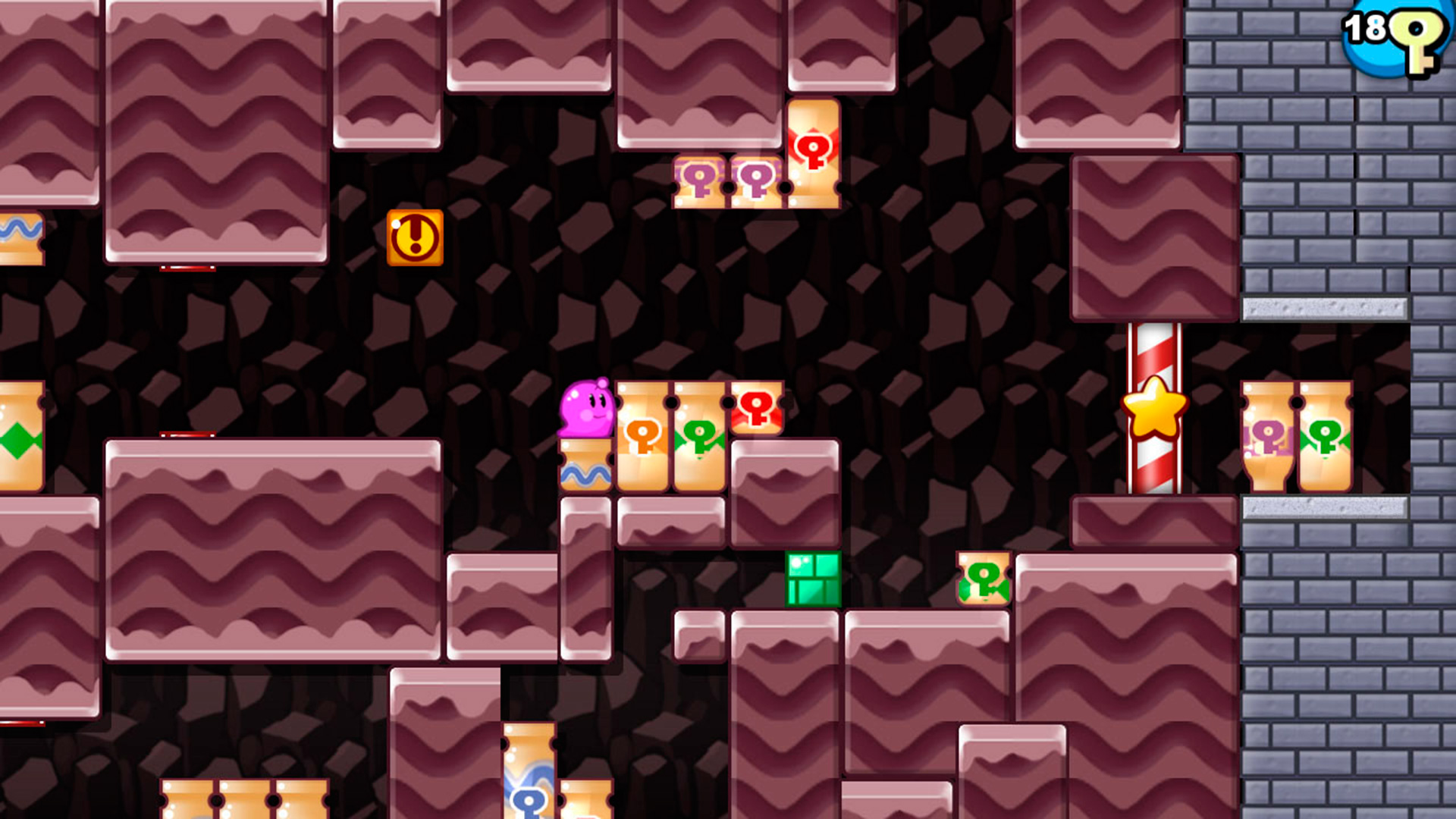 There is a kids difficulty and a normal difficulty, obviously the kids stages are very easy and can be done within half an hour. The normal difficulty in Hoggy2 contains 200 stages and is definitely a lot harder. When you reach particular sections in Hoggy2 you will come across the Moon Men and take on a fairly simple boss level. In these levels you don’t collect fruit but have to hit the boss in a similar way you would hit Dr Robotnik in Sonic. In terms of story there’s not much to go on after the initial kidnapping segment, you’ll come across Moon Men who will have something to say but not much to move the basic story on.

Graphically Hoggy2 has a charming layout and very colourful levels, nothing is ever obscured and you never feel like there’s too much going on. There’s a level editor that some more creative players may find some fun with this feature. Beyond that there isn’t much else to do in Hoggy2, but at its heart it’s a fun and involving experience.

Hoggy2 is a charming little platformer and an ideal game for younger kids to play, especially the kids levels. Overall Hoggy2 is quite a simple game, but if you like simple platformers containing puzzles that get more challenging as you proceed then you’ll find a few hours of entertainment with Hoggy2.

Hoggy and Hogatha are having a family day until the Moon Men kidnap their children. Damn you Moon Men!