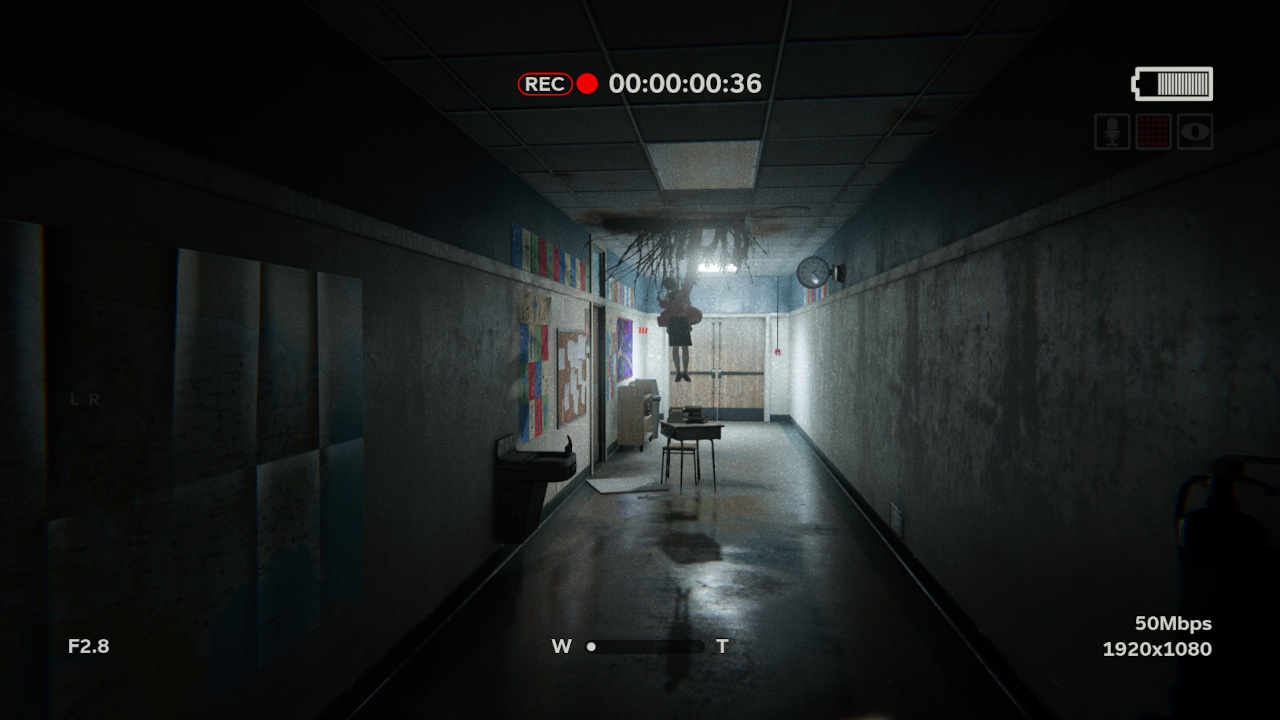 There’s nothing quite like a good Western scary story, is there? For people from around the globe, we all have situations and scenarios that scare us because it’s relatable. Think: how many games out of Asia are set in a school? And this isn’t just because school is generally a harsh time in life: schools, especially high schools in Asia, are creepy, nightmarish places due to design and the way they look at night. It feels like a trope, but that’s because it’s damn true. And, in the West, we have several elements that really spook us down in our souls, either due to firsthand experience, historic reference or colloquial retelling. Outlast took us down the first pathway that sits ugly in the halls of history, the abandoned mental asylum. Not something we’re proud of, but it happened and now it’s a perfect groundwork for a scary story. Outlast 2 decides to pick up and bring us down the next best thing: the cult, especially the incredibly intense and violent Christian offspring cults.Good news, folks: Outlast 2 is way scarier than it’s predecessor.

Outlast 2 takes place some time after the events of the first game, and, no, it answers zero questions regarding the Wallrider or anything that was set up at the conclusion (maybe a third is in our future?). Outlast 2 puts you in the shoes of Blake Langermann, a journalist (oh no) who is traveling with his wife, Lynn (oh NO) to look into the shocking murder of a pregnant woman who has no identity (OH GOD NO). Blake and his wife take a helicopter to the Arizona desert in hopes of finding some answers, because getting the story is super important, and neither Blake nor Lynn is willing to do all their research safely behind a desk. Within seconds of the game beginning, the helicopter gets shot down, Blake awakens at night, Lynn is gone and someone has gutted and crucified the pilot. Now, unlike the original Outlast, Blake here doesn’t have the perfectly logical choice to get the hell out and let someone else deal with this. He’s up a creek, and the stream is going to lead to some pretty awful answers in the form of not one but TWO cults and just the most horrifying, creepy visuals you can imagine right from the word go.

Not a lot has changed from the formula of the first Outlast. True to form of being both a journalist and apparently not even considering weapons, Outlast 2 gives you a video camera, a limited battery, and a svelte figure that allows you to creep under fences, jump up to grab ladders and fit easily under beds and into closets to hide. The camera, to its credit, is significantly better than the original. I never understood why Miles (dude from the first game) carried what felt little more than a home VHS camera, but Blake has this awesome digital deal that looks and feels more aligned with the current day. Additionally, the camera has better zoom that you’ll actually need to see some things coming, and it’s the only safe way to record some information. The scenes that require being recorded have a nice red ring progression meter, so you have to keep focused for a short period of time before it’s sufficiently “captured.” The camera also has an ultra sensitive mic rig, which you need to hear people and footsteps coming in some cases, so tuck that away in your hat because it’s the only way to survive some very unfair scenarios. The camera also seems more generous with the battery life, but that may be a bit different when you up the difficulty level (more on that in a moment). Basically, I felt I could run around with the camera on the whole time without having serious drain, but the night vision (which is critical) sucked it up plenty fast. There are a fair number of batteries around, but you actually have to look for them to use them. 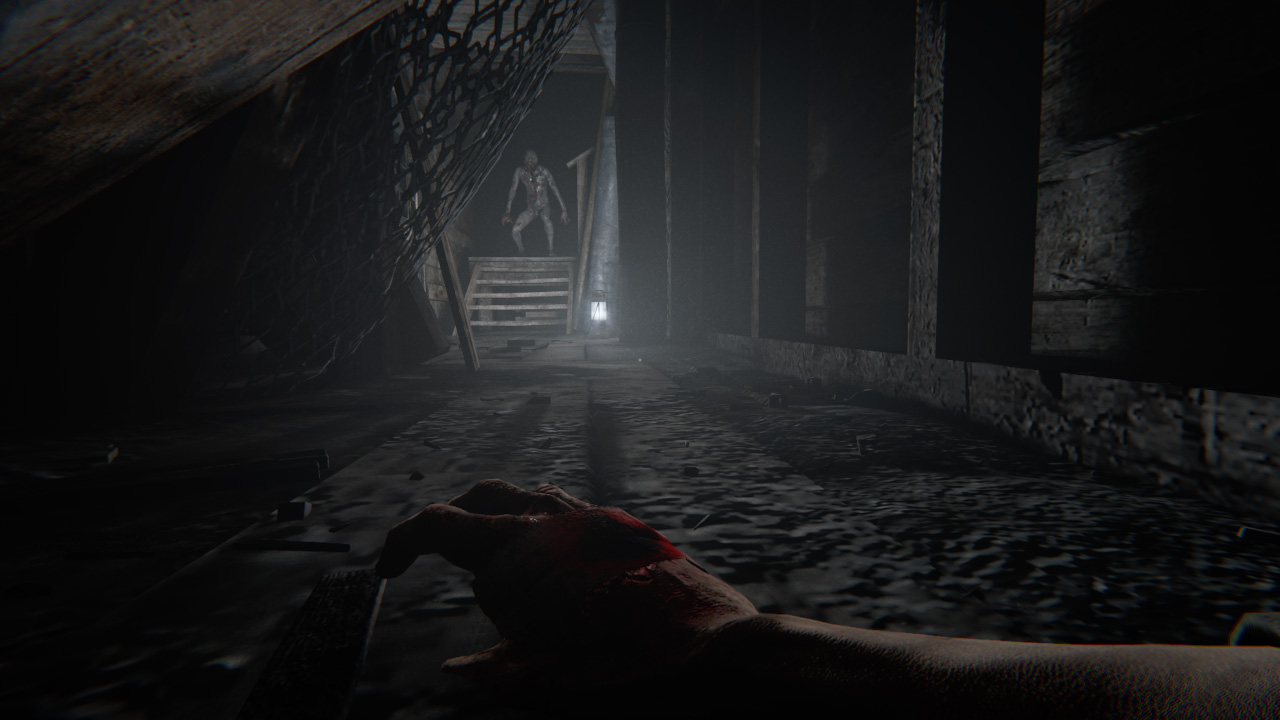 As for the Outlasting mechanics, Blake is still just a dude who inexplicably didn’t bring pepper spray, mace or a gun on this outing. Which makes even less sense than Outlast 1. I mean, going into an abandoned asylum because you heard some bad stuff was going on, okay, probably should be packing but I can forgive you. You’re investigating someone who was murdered, which means the person who killed this woman is still out there and probably isn’t keen to be interviewed about why he butchered the pregnant lady. You bring a weapon. Or at least bring someone who can use a weapon. Maybe the helicopter pilot had a gun! In any case, you’re still left to run and hide, and the hiding is a lot more involved this time. Since most of the people hunting you are crazy hillfolk who are mixed up into a paranoid cult, they’re a bit more meticulous than semi-monsters and deranged scientists. Sure, there’ll be times when you can stay in one spot, but, most of the time, you need to be aware of the points in the room where you can hide in shifts. Under the bed works for a moment, but you need to be ready to run so you don’t end up like the daughter in Taken. The closet only keeps you safe if they didn’t see you go into it and there’s a clear pathway that you theoretically could have escaped through: hiding in a room with one door, no windows and an armoire ends in you dead. There will be a few times where Blake is going to take a little stabbing and need to find bandages to heal himself up, and there doesn’t seem to be any way around that. By the end of the game, you’ll have been hurt a LOT without dying, and it’s best not to keep tally or it ruins the realism of the game.

Visually, I like Outlast 2 better than Outlast 1. Something about the design of the humans wavers away from realistic and more into this uncanny valley motif that makes everything extra creepy. Even your beloved wife has something off about her, which is only amplified more when you finally find her later, in the clutches of the cult and very unhappy. The cultists themselves may or may not be inbred (let’s not speculate on desert folk lineage) but they definitely have the passion and madness of religious zeal behind their actions, including the stabbing to death of you. Most, if not all, of the sights you encounter fall somewhere between unsettling and nauseating, from abandoned homes and children’s toys to dead bodies laid out in a cross and even worse. The biggest gripe that I have with the visuals is probably the fact that the night vision is, once again, a pivotal device to actually play the game and survive. It’s something that works in weaving the tense, anxious atmosphere, but then results in a lot of same in the color scheme and kind of washed out feeling. Playing a game in a dark room is fun, but doing so because you need to in order to see the screen is sufficiently less fun. The Switch is meant to be a portable solution to console level games. If I need to hide my console under a blanket to see what the hell is happening, I wouldn’t count it as a win. 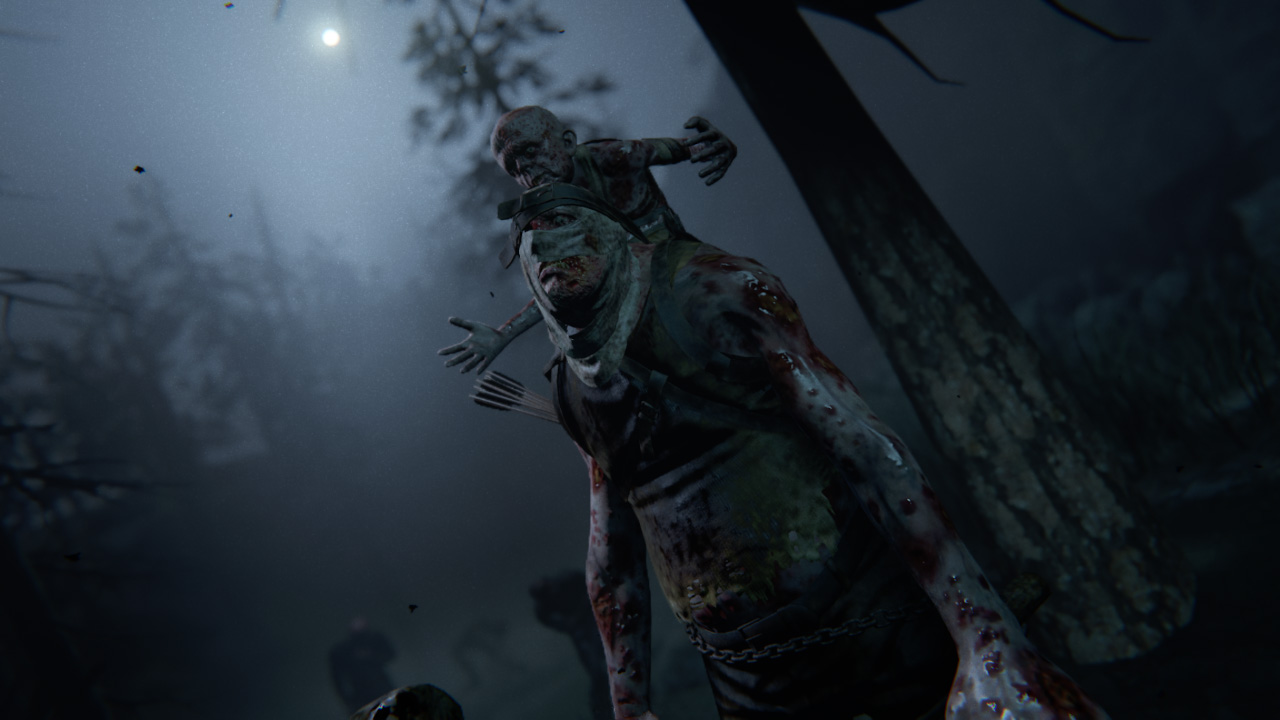 The game plays incredibly smooth on the Switch, which is always a wonderful get when it comes to porting certain titles. When it comes to smaller indie titles or even larger, more distracting ones, frame drops and lag could be easily overlooked as something that merely happens in the heat of the moment. Outlast 2 screams to keep your attention, and the Switch does a bang up job of keeping things fluid and ghastly, because, let’s face it, the last thing you want when you’re running for your life is a sudden jolt in movement that causes you to have a massive cross in your chest. The rumble exists but doesn’t really feel HD (not a complaint), and the audio is well sculpted, which is 100% necessary for this new title. Outlast let you do most of the surviving through eyes, but Outlast 2 needs you to keep your ears pricked up as well. The AI is more clever this time and quite a bit more terrifying, so headphones are a must, no matter how little you want them.

The launch of this Switch port is also the introduction of a new, very welcome mode on Outlast 2: Story mode. The biggest problem with swallowing and dissecting everything that goes into the world of Outlast is that you tend to get murdered. A lot. In horribly visceral ways. Story mode is meant to help you focus less on the twitchy style of gameplay and let you drink in the pulpy, terrible story of the Arizona desert and all the things that happen there. Now, some of you might call it easy mode, but it’s even more than that. Not only are random encounters severely reduced and the AI scaled down to be more predictable, but there are several instances where it seems that encounters are removed altogether. There’s a rather creepy scene towards the beginning where you hear cultists muttering off in the bushes and you need to basically bait them out, hide and then sprint past them to get to the next area. In Story Mode, the cultists can still be heard, but I seriously didn’t see them at all. I just moseyed through like it was my own backyard at night. Story Mode does NOT, however, make you invulnerable, nor guarantee you a deathless run. You can still walk off cliffs and into traps, and the cultists who do exists will absolutely kill you if they catch you. Story Mode is Outlast with arm floaties: you can still drown, but only if you’re pretty hellbent on not following common sense.

Outlast 2 is a creepy, disgusting and disturbing tale, and it’s been crafted with love and madness to be a great fit for the Switch. Though I take umbrage with some of the lighting situations and wish there was a touch more cohesion with the first title, it stands on its own as a tight entry and a must grab for fans of the original. If you love horror and want to focus more on the “survival” and less on gunplay, then Outlast 2 is an amazing get. If you want to sleep tonight in your own bed without needing to barricade the doors and windows, then you may need a different game.