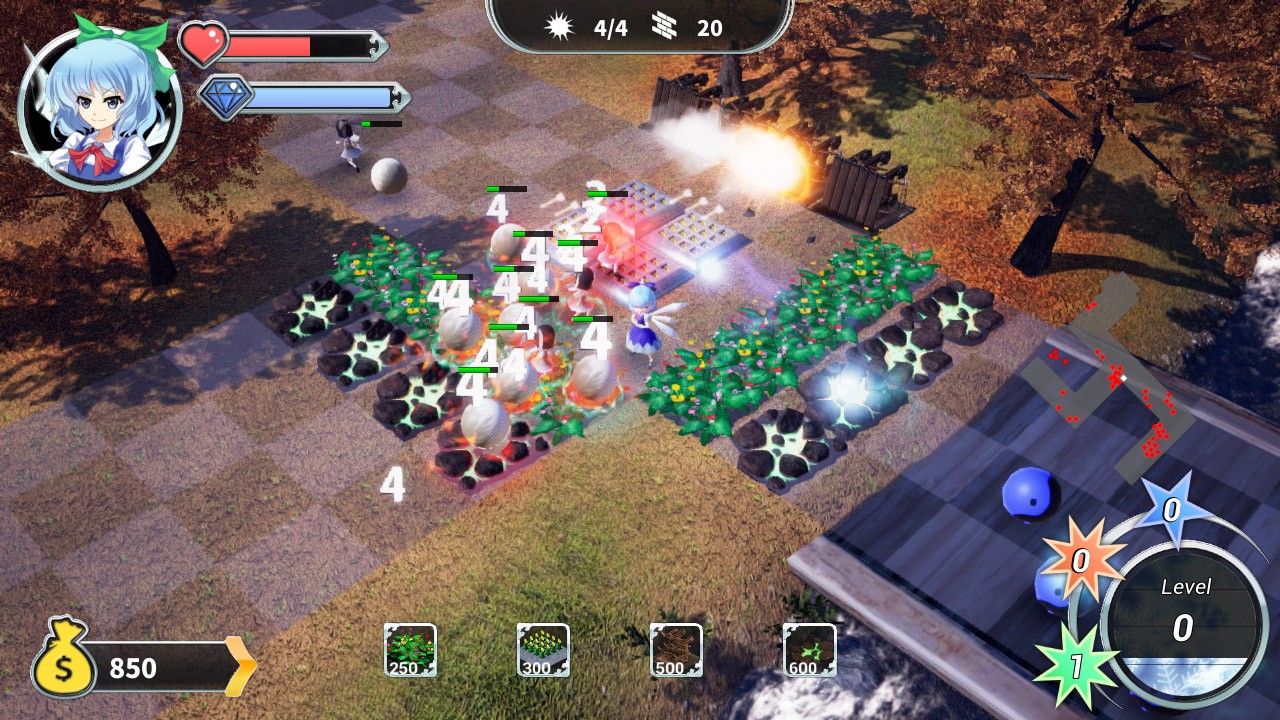 Gensokyo Defenders bring the world and characters from the Touhou Project into a shooting tower defence game. Developed by Neetpia and published by Phoenixx, it saw a worldwide release back in November 2018. Safe to say it has been out for a while now, but how does it still hold up after all this time?

The story follows Cirno, an ice fairy, who is bored with the danmaku games the fairies predominately play and changes it up and focus on playing a war game instead. Wanting to make a name for herself, she sets out to challenge anyone and everyone whilst journeying across the land. The story is told via visual novel style cutscenes and content wise are a bit hit and miss. If anything, an improvement would be to make them shorter as they just drag on whilst you just want to get on with the level. Particularly as the humour is cliche tropes and the lines seem to be delivered in a slow fashion. At least the skip function is available to just get on with the game. Admittedly, fans of the Touhou Project will probably get more out of it, but Gensokyo Defenders is still accessible for those unfamiliar with the previous content. 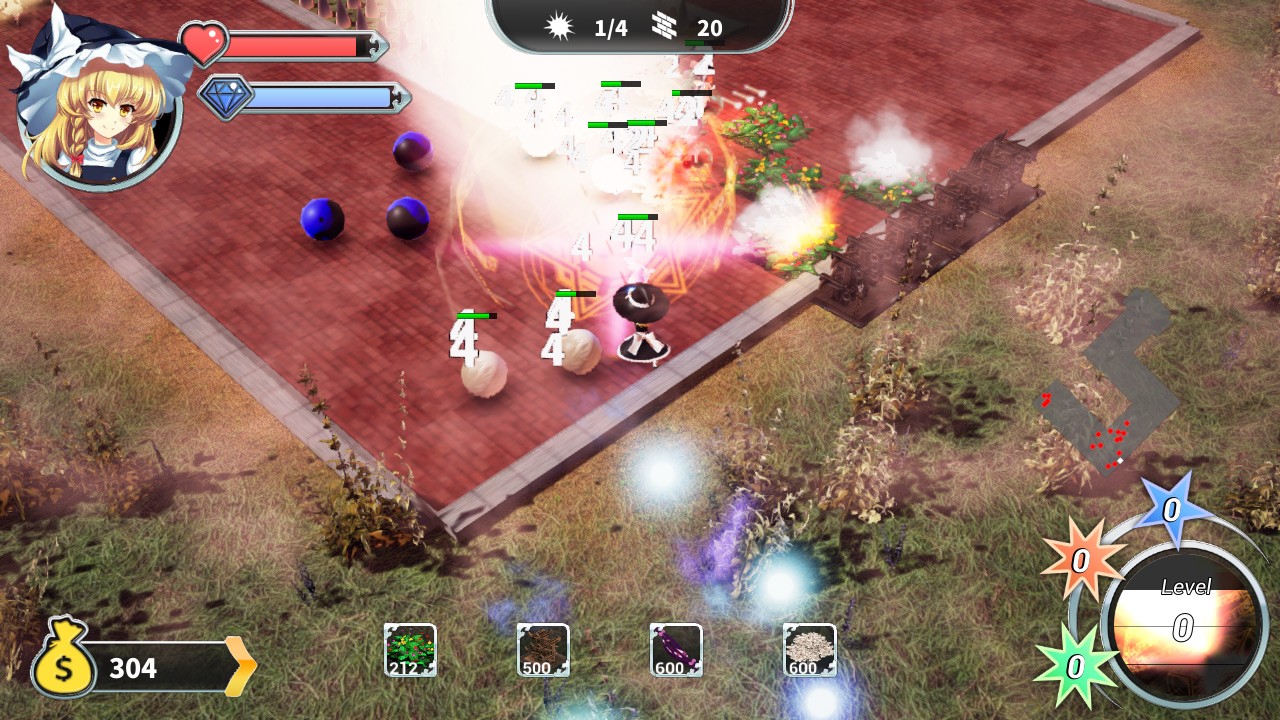 As with any tower defence game, the aim is to defend your area from the enemy attackers. Where there are different variations of this genre, Gensokyo Defenders opts for the player defending a base alone whilst the enemy has a mini-army trying to destroy it, spawning in waves. Pretty similar to Fornite’s Save the World mode, but multiple levels over one base you continually build. However, instead of attacking, the enemy’s aim is to simply walk into your base, as each unit which does this takes off 1 health from the base. The other way the base health is lowered is when the player dies, where they will respawn after a cooldown period, there is also a cost of 5 health off the base. As you may expect, the army you face comprises different troops, well fairy types that differ in walking speeds and abilities. Walking speed is self-explanatory, but abilities range from different style shooting attacks, such as; shooting out in a circle, to flying units which can take shortcuts, and so forth. Some levels even contain a boss unit which is more active in trying to fight you then reach the base, adding an interesting mechanic to prepare against. At this point you are probably thinking, all this seems unfair being one person against an army? Well, let’s look at what you can do.

The main form of attack is basic shooting, appearing as continuous or burst depending on the character you are playing as. Interesting, you only need to press the fire button once and they will carry on shooting. A useful feature as it allows you to focus on what is going on across the map. Aiming the bullets is based on the direction you are facing and luckily it is controlled independently to movement. Generally it works well, but can be a bit blocky at certain angles, making it a pain at times. Other than shooting, there are also spells available to give an extra edge. These vary between the different characters you can play as, being a mixture of attacks that have different ranges or can be status driven such as slowing the enemy down, and causes players to play differently to make the most of their attributes. There are two spells available, each costing some MP for every use, and there is a good balance of how many spells you can do as MP recovers as the battle wages on. On top of this, is an ultimate spell that will help clear a bunch of the enemies out of the way in one go. Called the Last Word, this doesn’t cost MP, but rather a separate gauge that is filled by defeating enemies. Where there is no system to improve these outside of battle, inside there is a chance to level up each for the duration of the mission. This requires a bit of luck and hoping enemies drop a UFO of all things. When it appears it will cycle through colours linked to basic attack, spell 1, 2, and the last word. This gives you a choice of which one you want to focus on but personally I would prefer a system outside of the battle as having the stats restarting with each level like in League of Legends is disheartening.

As if that was enough, there is also another form of defence available to you. Traps. Before each wave you can plant traps, with unlimited time as Gensokyo Defenders allow the player to decide when the enemy army marches. Of course, there is a limit on how many traps you can place which is based on how much money is available. Starting with a set amount, which increases as the game goes on, and extra money is earned during the level when you defeat an enemy with an extra top up after each wave. Where there is the ability to place traps during the attack phase, it is at the cost of stopping fire whilst toggling through the different traps, so is risky if there are enemies nearby. Interestingly, traps don’t have any health or durability settings, thus last the whole mission unless you sold them. This allows the player to keep building and bulking it up as the waves get harder, as it eventually does. Where it makes it sound like it is easy, defeating an enemy doesn’t give you much money, this makes it balanced. Plus, the game gets quite challenging after a couple of levels. 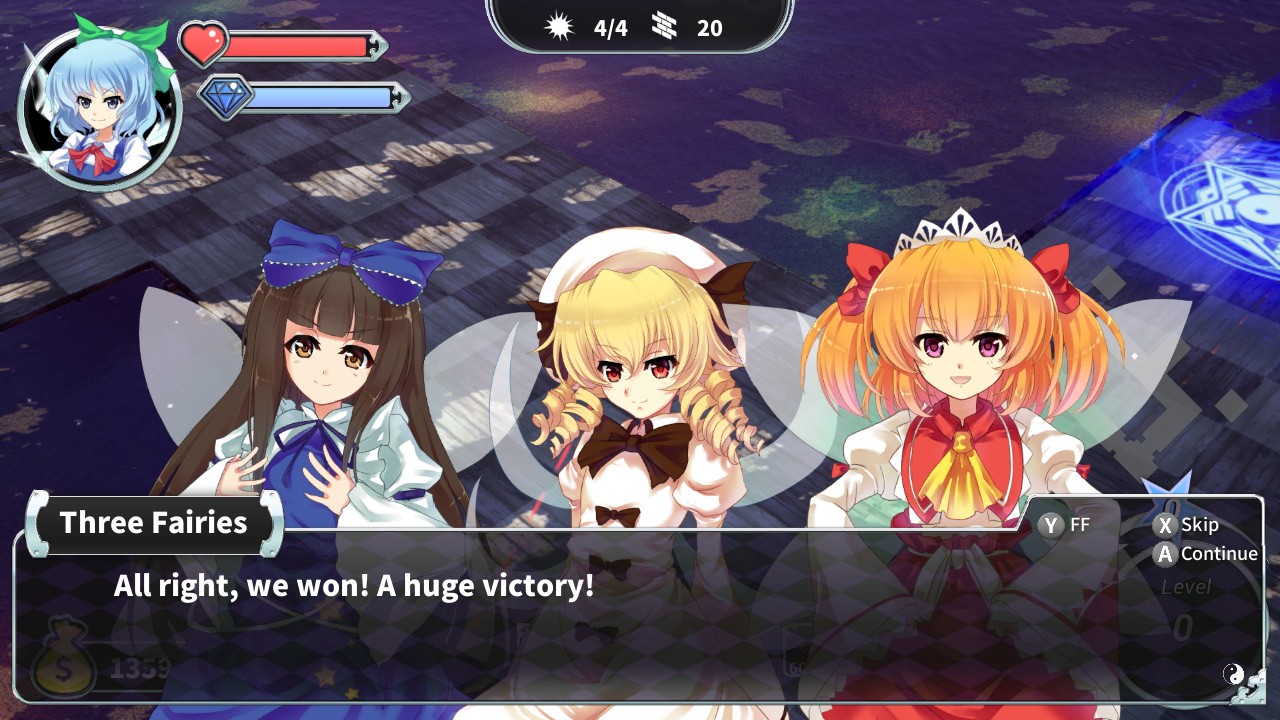 These traps come in a range of varieties, ranging from watch towers that shot across the path, to spring floors that will push enemies away with the chance of being able to fling them off the path. These give you a range of options with the limited budget available and forces you to think about your tactics. This is only further enhanced by the range of paths that appear from level to level as they change in width, direction, etc. It is a real strength of Gensokyo Defenders as it forces a player to adapt their tactics as there isn’t a one glove fits all approach. Unlike character stats, traps do have an upgrade system outside of the individual levels. This is through skill points that are gained based on your ranking outcome upon beating a level. With a max of 3 available, you can get more from redoing that level on a lower difficulty. This really helps to speed up the process. For the upgrades, the player decides between increasing damage/effect, range and even lowering the cost. As more traps become available, it gets overwhelming, yet there is a reset if you want to change how the points are distributed.

Beyond the main story mode, there is an online mode that seems to involve teaming up with another player against one enemy army. However, as this game is old now, it was impossible to arrange, which is a shame. Although why this wasn’t worked into local multiplayer is a huge question and a missed opportunity. As Gensokyo Defenders gets quite challenging, having that option would have helped players who are struggling, or even to mix it up when you replay levels. Where it does already encourage replays of levels, hints and instructions on how to play from the first time you attempt the level remain making it a bit slow. It is even stranger when it gives hints about certain characters and on replays when you aren’t even playing as them. An option to skip the hints would have gone a long way.

In terms of looks, the graphics of the game itself are good. Basic, but work well to make it clear with the traps and what you are doing. It has a cutesy feel to it, making the characters looking like little dolls. The overall screen could do with some parts being removed, mostly the button mapping as that need not be there all the time. Where the map being near the gauges is manageable, it feels like a better place would be near the health gauge to just help the player pay more attention to it. I kept forgetting it was even there. Although the real issue in Gensokyo Defenders is the menus. They look pretty poor, as if they are from a really basic flash game. It spoils the overall feel, at least on the flip side the portrait art for the cutscenes are a good standard. Anyway, the last thing to talk about is the sound and luckily there is a nice range of themes to fit the mood and little sound effects to give the real feeling of battle. Notably, there is a good music change between battle and planning phases to remind the player, yet there is no alert when you get hit. It is only too easy to lose track of and can leave you dying out of nowhere. The only solid visual clue is the health bar, but when there are lots of enemies coming can be easy to lose sight of. Again, just another instance of where a little more tinkering would have gone a long way.

If you are looking for a good tower defence game, Gensokyo Defenders is definitely for you. Sure, the game could do with some tweaks but the gameplay mechanics allow for a range of tactics and need to be adapted to the different maps of each level. Whether you are already a fan of the Touhou Project or not, this is a game you can dive into with ease.