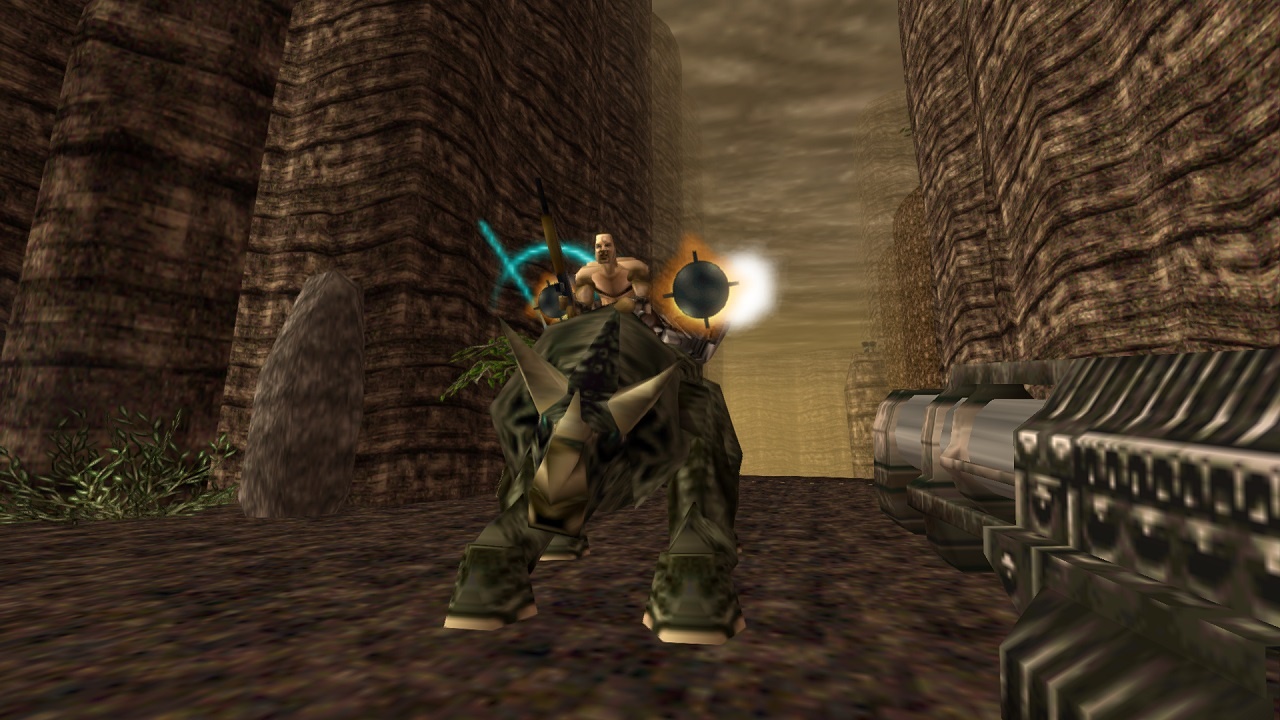 It’s hard to review a game that’s nearly as old as I am. Despite being a polished port, Turok for the Switch still remains Turok. It’s still the fast paced Dino hunter you remember from twenty years ago, for better or for worse but, while it’s still a warts n all experience, the quirks and novelties of the old school FPS still make this worth your time.

For a generation that’s used to the heavy scripting and blockbuster feel of the modern shooter, Turok might seem painfully simple. The likes of Turok, Quake and Golden Eye were a completely different breed of FPS, with the focus being on the fast pace of the labyrinthine levels and barrage of enemies that swarm the screen. It can be a little overwhelming, but simple controls and a great selection of weapons keep it fun and engaging.

At its core, Turok for the Switch remains the same as it did way back when. Our titular dinosaur hunter sees himself exploring deep jungles and caves, searching for sets of keys to unlock the next area, with the ultimate goal to defeat an evil warlord who’s hell-bent on locating an all-powerful weapon called the Chronoscepter. There’s plenty of freedom to travel back and forth between maps, essentially making it feel like one giant area. It’s a game of hunting for secrets, exploring mazes and caves and laying waste to hordes of enemies. There’s plenty of humans, dinosaurs and monsters to tackle, and it’s a fine example of clever enemy variation that’s often overlooked in modern games. Granted, it doesn’t make sense to fight aliens in a game centered around dinosaur hunting, but who cares when they’re so much fun to battle? 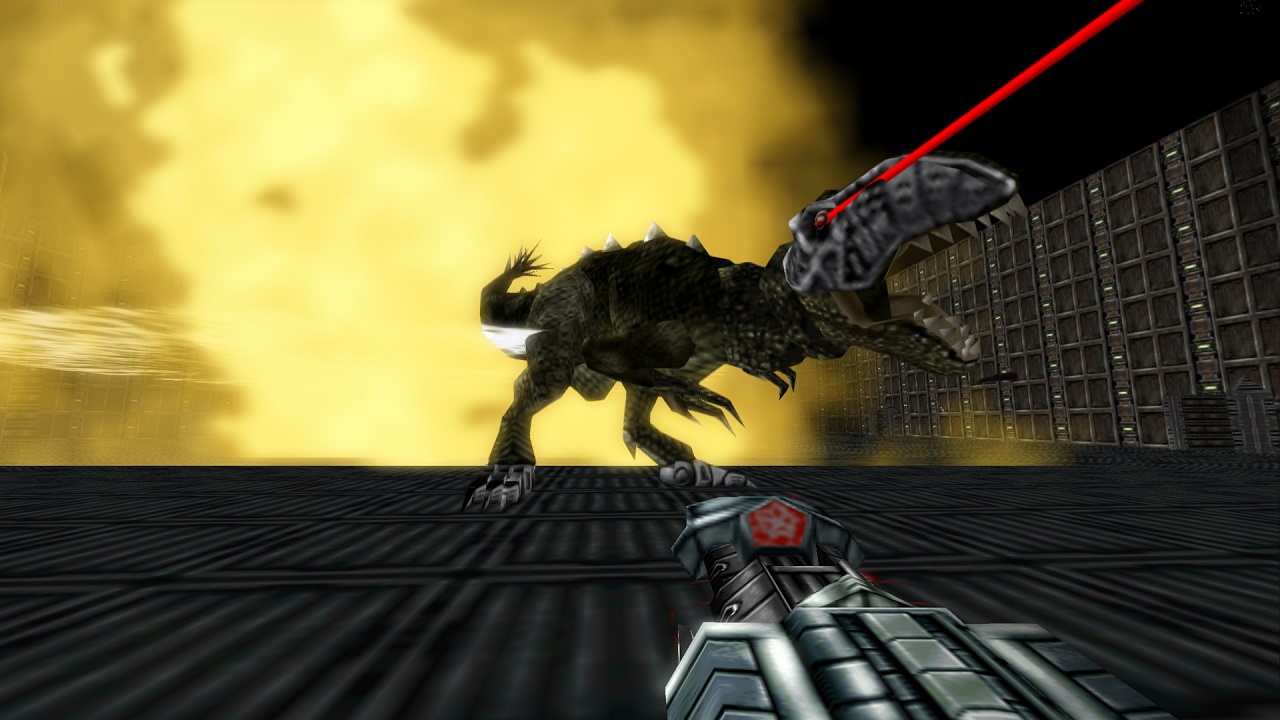 And it’s the enemies that keep you on your toes. They aren’t just cookie cutter melee or ranged attackers, but rather a well crafted selection of bile spewing, ground stomping, rocket propelling bad guys that make the game so exciting. Obviously Turoks arsenal is just as bonkers, from the usual pistols and bow and arrow to more ridiculous pulse rifles and the like. You’ll definitely have your favorites, even if the later titles had much more elaborate weapons (cerebral bore, anyone?). There’s also plenty of alternative ammo to find, like explosives and grenades at your disposal, as well as a short effect collectable that can slow down time and give you invincibility.

Platforming and exploring doesn’t alter much over Turoks eight levels, and neither do the environments. Most of the maps are variations on the same jungle theme, with the exception of some later areas like a lava filled deserts. There’s plenty of nooks and crannies to explore though, with secrets to find and weapons to hunt down, so if you’re interested in fully completing the game there’s loads to get stuck into. 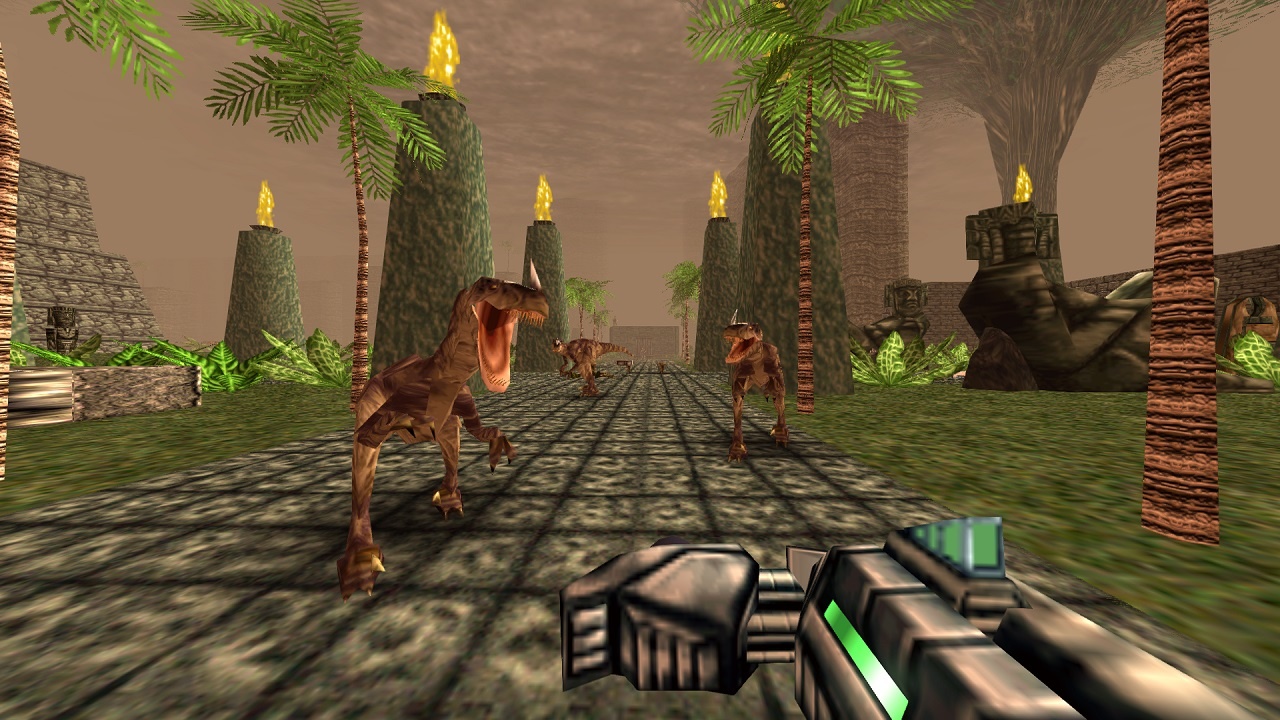 But there’s an argument to be had whether Turok serves better as a novelty, rather than a necessary purchase. It’s still fun, and as far as ports go it’s perfectly fine, but it’s by no means the pinnacle of the series. Levels are often bemusing, requiring a fair amount of backtracking, and there’s plenty of inconsistencies with how much damage enemies do and take, for example, sometimes you can unload an entire clip into a raptor and he’ll still keep coming, whereas other times it only takes one shot to take them out. Also its an ancient game, so don’t expect it to look pretty. It’s all sharp edges and harsh looking environments, but it does run smoothly and, as a piece of history, it serves its purpose.

Turok is an above average port, even if it is certainly not the best title in the series. If you’re looking for a relatively easy-going classic shooter that ticks the nostalgia box, then you can’t really go wrong with the ageing dinosaur hunter.

It’s still the fast paced Dino hunter you remember from twenty years ago, for better or for worse but, while it’s still a warts n all experience, the quirks and novelties of the old school FPS still make this worth your time.