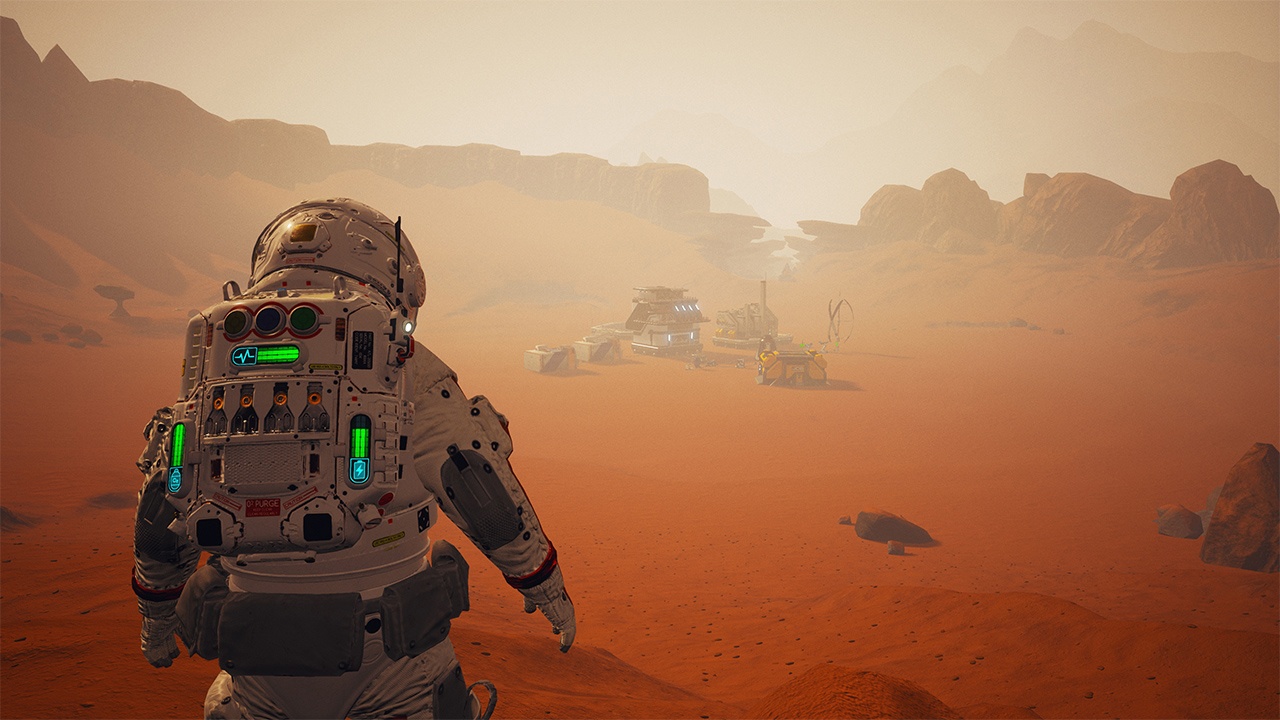 The concept of the hidden secrets held within the universe has been a long fascination to mankind. From the first steps upon the moon to the ideas of the colonisation or exploration of a distant world, the whole premise of science fiction is one that is full of wonder. Its fascination can be seen in the popularity of sci-fi novels, films and video games, all of which fuel our natural inquisitiveness into the unknown. Now, thanks to Atomicom Limited, you can explore and colonise the red planet of Mars, as their sci-fi sim, JCB Pioneer: Mars launches a release on the Nintendo Switch.

The game begins with you stranded on the barren landscape of the red planet; after your landing capsule crash lands a short distance from an already-established outpost. With the guidance of Dr. Lei through your intercom system, who actually happens to be a real-life scientist who helped with the technical advice for the game, you set about finding your way back to the outpost, before setting off a journey of discovery and exploration in order to expand your home base and begin the human colonisation of the planet. But with only limited knowledge of the landscape and the harrowing environments of Mars, your task is no easy ride. However, with the help of a variety of land-based vehicles produced by the infamous JCB brand, you’ll have the perfect tools in order to overcome the barren and unforgiving elements found upon the planet.

Although primarily an exploration and survival adventure, the pacing of the game also presents a very simulated feel to its gameplay mechanics. With the help of Dr. Lei, the story unfolds through a series of audio transmissions that detail the mission parameters and tasks that are essential to ensure your survival. There are five elements that need to be maintained in keeping you alive: Health, Oxygen, Power, Food and Water. In order to keep a healthy stock of these elements, it becomes vital to explore the vast sandbox regions of mars, excavating vital minerals and gathering resources to not only keep you going, but also in expanding your base to allow it to cater for all of your survival needs. 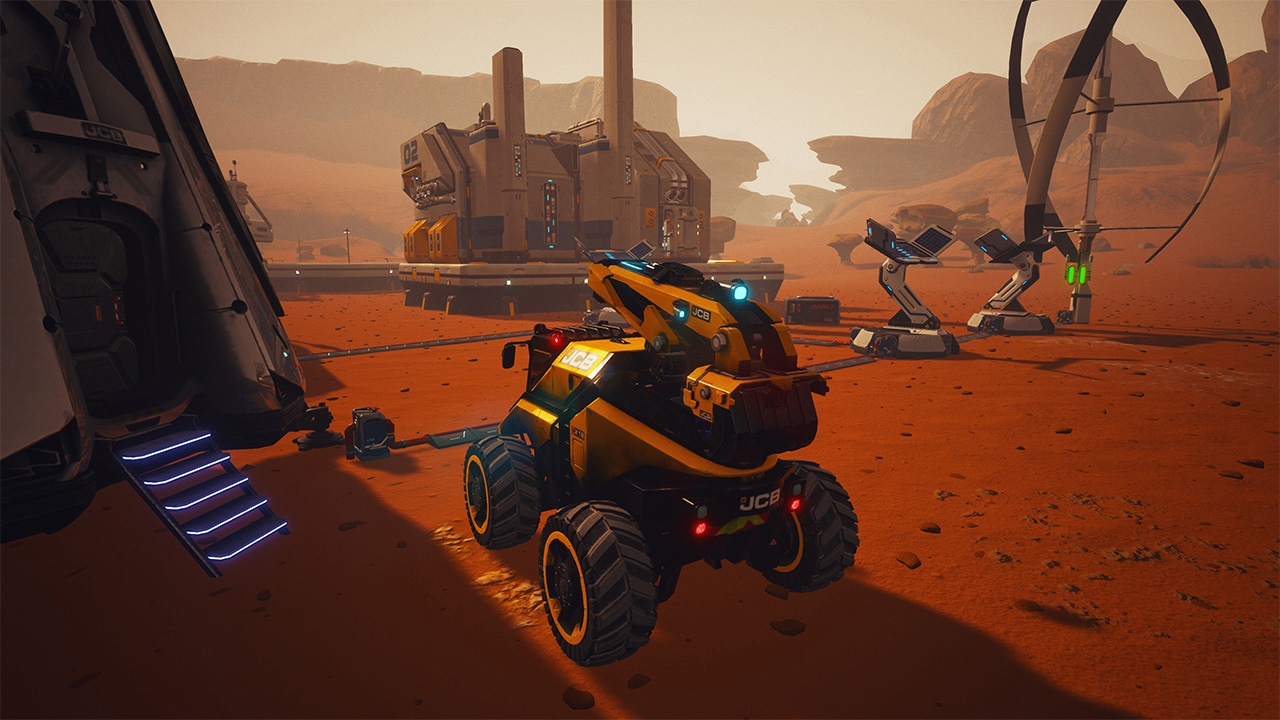 Your journey begins on a linear path, as the game introduces you to its mechanics. Through either a first or third person view, you traverse the dusty and jagged landscapes, avoiding all manner of obstacles from meteor storms, dust clouds, electric tornadoes and geyser eruptions to establish yourself at a small outpost. Although the game offers a tutorial of sorts through at the beginning of your journey, it rarely holds your hand enough to guide you along every step of the way. This adds a sense of urgency to the proceedings, as well as bring a feeling of desperation as you try to figure out the landscapes and tasks that are needed to be fulfilled. However, once established, you soon find that the game opens up to an immense sandbox world that is yours for the taking.

As you begin to develop your base, you gain access to a wider array of vehicle types, repair items and laboratories in which to develop further. The main premise of the game revolves around the exploration of the environment, a task made difficult with the lack of any meaningful map or navigation, and the gathering of vital resources. Through the use of a 3D printer, you begin to develop items that help you to advance further in the exploration of the planet. Although the sandbox design of the game allows a freedom to explore, your mission directives give a you point of navigation; often revolving around collecting specific items, repairing certain points that have been damaged by the harsh environments and building new expansions to develop an impressive looking home base.

In terms of its adventuring, that’s pretty much it. There’s no full-scale wars with alien races or flying around the system in a spacecraft. This is essentially an exploration game that runs at a slow pace, but that is purposely done to produce a simulated feel to actually being stranded on a distant planet. Its survival elements bring a sense of urgency, making the collection of resources a vital component in advancing further into the secrets that the planet, and the game itself, hold. It makes a nice change, having a game that paces itself with the right degree of urgency and exploration, allowing you play the game at your own leisure and just about holds enough variety to keep you engaged and interested in its progression. 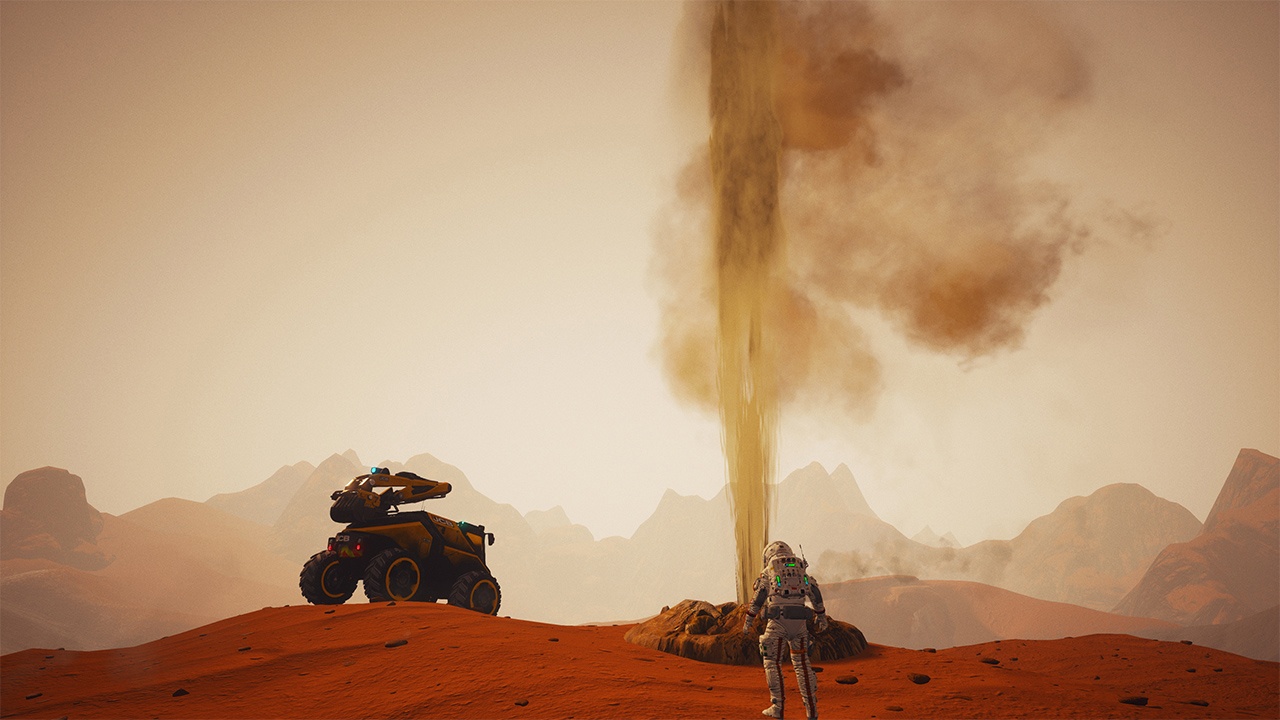 It all takes place in quite an impressive setting. Although the majority of its presentation in primarily dusty and red, its unforgiving landscapes and environmental dangers produce an exciting premise in which to explore. Graphically, everything here is nice and sharp, with some impressive details, especially when viewed from a third-person perspective. Although you can walk around the landscapes, a series of JCB-designed vehicles can also be used to explore the further regions, as well as aid you in the excavation of buried resources or the exploration of discovered cave networks that house all manner of secrets and surprises. It’s this allure of walking into the unknown that holds a hook to keep you invested within its gameplay.

There’s a certain degree of experimentation that goes with the game too, as although the audio communications point you in the general direction, they don’t always outline what you need to do, or what tools you may need to take with you; further bolstering an air of mystery and forcing the player to think strategically in what they feel are the most useful items needed to ensure their survival. In terms of a survival and exploration style of game, this is a title that succeeds in what it sets out to achieve; in that creating a foreboding world, a sense of loneliness and an urgency to create a state of welfare to make your life as easy as possible in such a harsh environment.

Overall, JCB Pioneer: Mars is an interesting title that offers a good immersion with its survival and exploration elements. However, due to its pacing, this may not necessarily be a title that appeals to everyone. There’s nothing here particularly fast-paced, no aliens to shoot up or exciting set-pieces to enthral. What this game does hold though, is an interesting task in exploring the region and setting up a home base. It’s in this respect that the games shines quite brightly and offers a good simulation of being stranded on an alien world. It can be confusing at times and on occasion, a little frustrating; but then, if this were a real-life scenario then I’d suspect that these would be two elements that would be at the forefront of what you were facing. Its presentation is nicely done, especially when you consider that this is being played on the Switch. It can be a difficult game to recommend to everyone though, mainly because it feels so different from the mainstream of video gaming, but if you have the slightest inkling of interest or intrigue of what this title holds, then I’d say it’s well worth making a giant leap for mankind into its interesting premise.

JCB Pioneer: Mars is an interesting title that offers a good immersion with its survival and exploration elements. However, due to its pacing, this may not necessarily be a title that appeals to everyone.