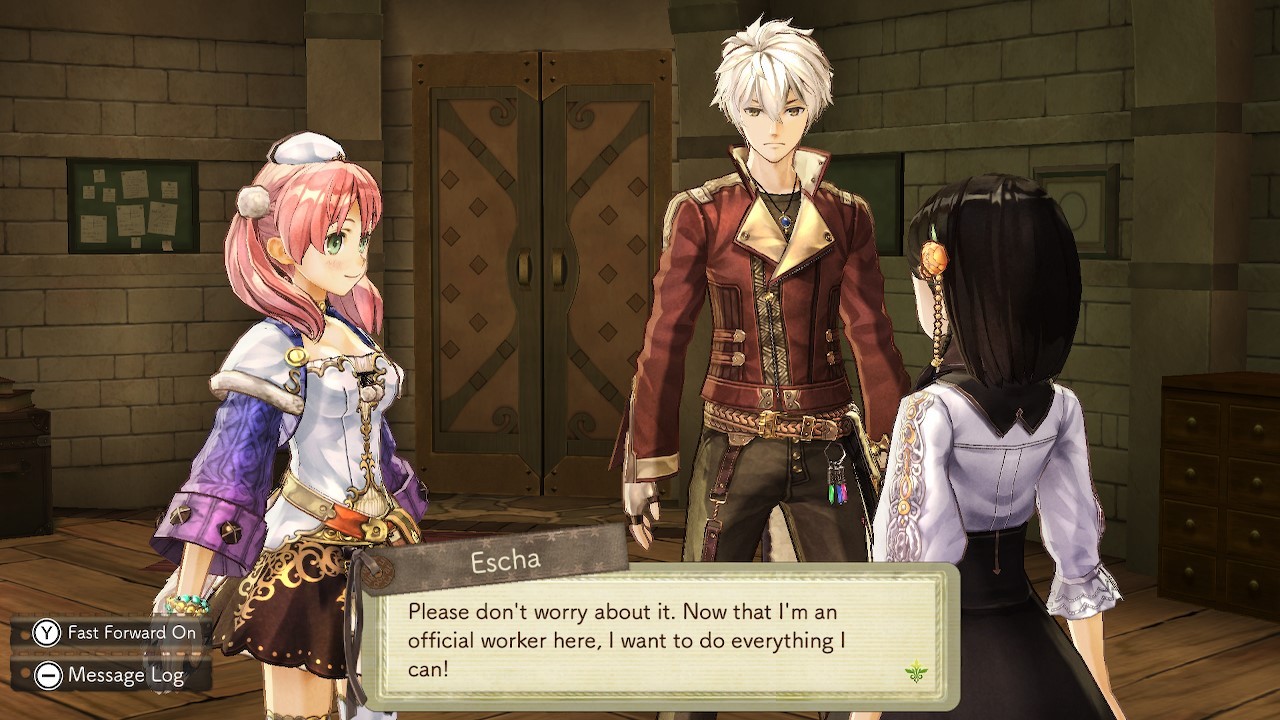 The Dusk trilogy of the Atelier games are interesting if you like to see where a story can go with a very different sort of background/basis. For example, a majority of the Atelier games tend to be a bit more poppy and happy: even when you’re working against the clock, it’s usually something involving personal development, or helping out with reaching everyone’s hopes and dreams; sweet stuff that is driving, but not necessarily breaking new ground. With Atelier Ayesha, we got a chance to see what happens when a girl in a post-apocalyptic landscape is working to try and save her sister from the void of nether before time runs out, and it draws you in and breaks your heart in wonderful ways. The Dusk area has the darkness that can make things a bit more edgy, and more compelling as a result. Atelier Escha & Logy: Alchemists of the Dusk Sky doesn’t follow the same sort of formula, but it does do a lateral move with bringing about some new ideas and a much heavier drive: namely, the end of the world.

In the town of Colseit, alchemy is slowly making a big comeback so that the town can achieve their biggest dream of investigating some lost ruins. There was magic and sorcery in times before anyone can remember, and the result is The Unexplored Ruin, some kind of abandoned castle/town that literally floats in the sky above Colseit. What’s inside? No one has a damn clue, but we need to figure it out, and that brings together our two protagonists. Escha is a wide-eyed, excited and hopeful atelier who fits in very well with the long and proud traditions of heroines that we’ve seen in the series. Logy (which is somehow short for Logix) is the first male lead that you can actively lead the game with, and his story has a bit of a “I had to leave my old town in a hurry” motif that makes you very curious what the boy was up to previously. After meeting and being assigned some general tasks (to help understand the game), we set upon the first major plotpoint: to construct an airship to best investigate the Unexplored Ruin. But, as we soon find out, there are some things that don’t want to be found or explored, and ambition and anger can quickly turn to chaos and disaster if our heroes can’t work fast enough to save everyone. 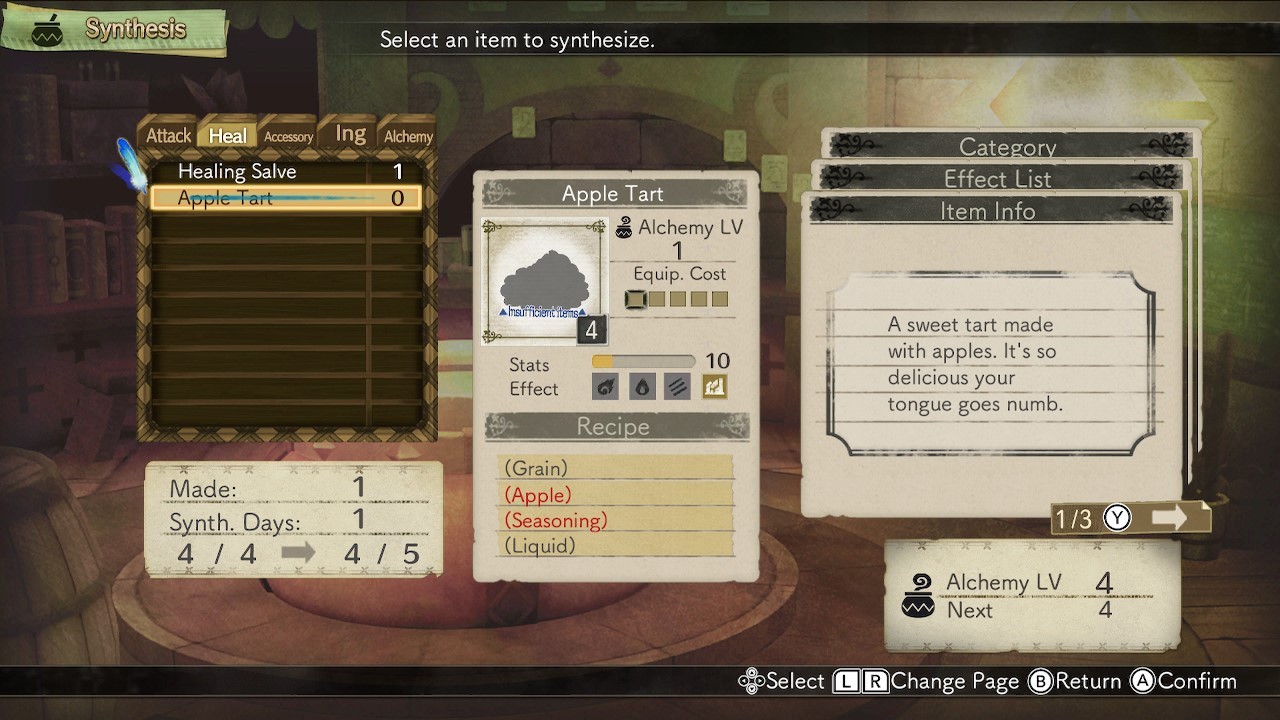 The decision by Gust to have a dual narrative is a very light, gentle toe in the water of the different storylines, and it works out fairly well for Escha and Logy. When you play through the game, the core storyline and events remain the same regardless of who you take. Logy’s backstory will come out regardless of if you choose him or not, so don’t feel mandated to let him take the help just because he has a more intricate setup. Granted, there will be some variants as NPCs and different, minor events take place that only affect Escha or Logy, but nothing is really exciting enough to make this game a mandatory double play. If you really enjoy the story (which, again, is quite decent for the Atelier series), then go ahead and take a second swing. But if you feel like you got the gist of what happens with Flameu and her endeavors the first time, you won’t gain a ton of extra information from the second playthrough.

Using the same designers as Atelier Ayesha, Atelier Escha and Logy has plenty of beautiful maps, characters and monsters, with plenty of the last two being familiar to those who played the first Dusk game. Some new characters take place (with Lucille and Flameu being the biggest presence outside of the titular leaders), but the return of Linca and Wilbell is very pleasant and reminds us of the cyclic nature of the Atelier universe. There’s another character from Ayesha who shows up MUCH later on, but her appearance actually gives a lot of closure to her character arc from the first game, so it’s worth playing all the way through if you felt a little unsatisfied from how the sisters wrapped up their roles.  Everything looks beautiful, and, performance wise, there’s substantially less stuttering in this game, which leads me to believe the performance issues of Ayesha was based on the original code and not the Switch port. I am, once again, a bit grumbly about the lack of camera movement, but the game naturally positions itself in ways to make it accessible for the most part.

Gone are the diary entries, which makes sense since those best fit in with Ayesha herself, but Escha and Logy bring their own flair into the game with drilling and disassembly. Sure, for countless titles now, we’ve been able to craft potions and polutices and things like that, but how about we make a damn weapon in our own free time, too? Thanks to Logy’s mechanical background, it’s now possible to craft some combat related items beyond just projectile explosives, and it’s a nice scratch to the expanding crafting itch that began to overtake video games a few years after this was released. The routine is spot on akin to how it works with synthesizing other items, so players don’t need to reinvent the wheel when they’re figuring out how to make a sword. Part of me feels like it’s a bit too much of a deviation: after all, we’re all about alchemy, not blacksmithing, and that starts to straddle too much of a line. On the other hand, not needing to rely on other shops does make for a more “heroic” motif, and it meshes well with the disassembly mechanic, which lets you take apart relic from the field in order to make and extract base elements. 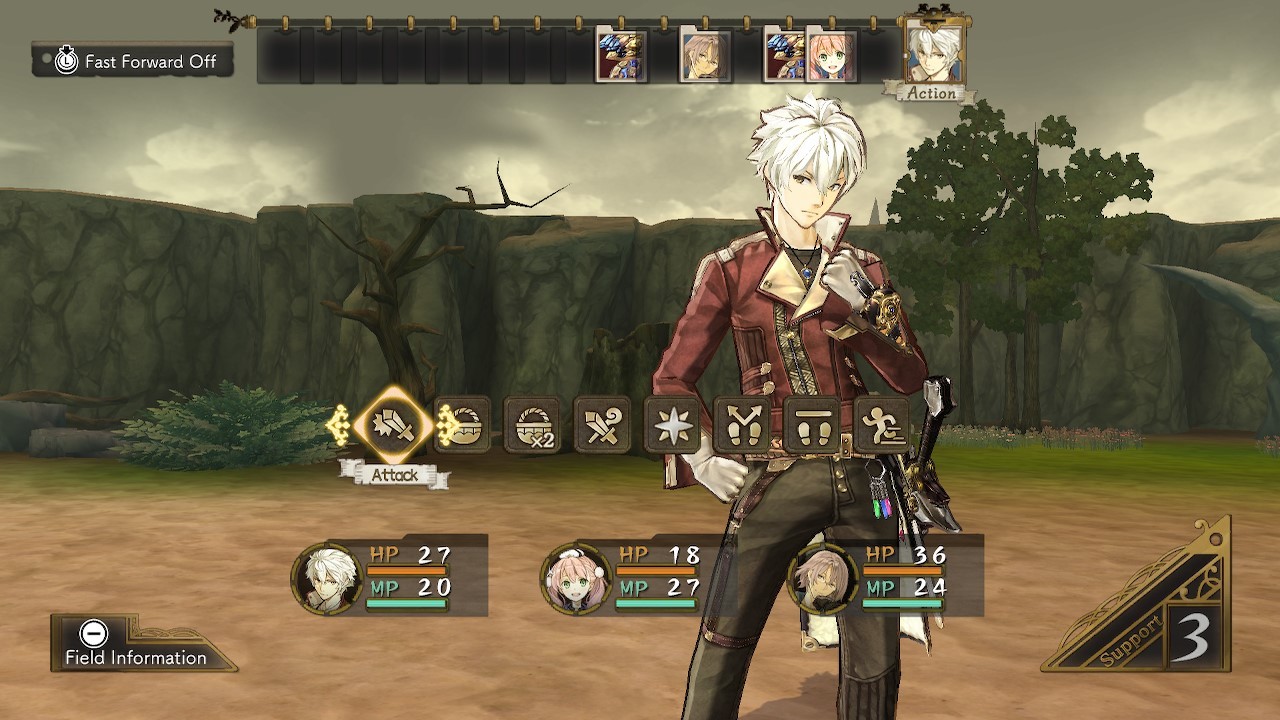 For whatever reason, I simply didn’t like the layout of Atelier Escha and Logy as much as Ayesha, and it took me a while to happen upon the idea. I think it’s because Ayesha had a lot of heart and personal drive with her storyline, and it makes the hunt for Nio and letting down her guard to allow others to help more interesting, especially set against the stark background of the Dusk work. With Escha and Logy, you get two of those things anesthetized right away. First, they work as a duo: there’s no inherent solitude, but an abrupt, nonstop duality that you can’t really stop. Additionally, despite being in the Dusk universe, the tone is quite different for a majority of the game. You don’t really get a dark or dilapidated feel until a bit further into the game: after the slightly cryptic, gothic opening, everything is bright and sunshine, and the town, despite wanting to outrun the foretold “End of Dusk” second apocalypse, is pretty cheery. Even the music feels too bright for a lot of the expenditures and events, from simple quests to actually hearing about Logy’s prideful mistake that cost him his old life. Also, it’s not that huge of a mistake. I was expecting an orphanage to burn down or something. It never gets there.

The combat is solid and significantly more involved, allowing you to put six characters onto the field at once and actually change formation depending on how you move about the battleground. Atelier games aren’t always known for their combat, but I love seeing Gust and Koei Tecmo take a big swing with this one, especially since the cast of characters isn’t really that large. Putting so many people into the fray at once, delegating a bunch of roles and then having just the hero support them all makes this shift from JRPG combat to an almost tactical situation, with a lot of consideration and planning, and that’s good with the shift in boss power. Bosses of the Atelier games have never been easy, but there’s something about the Escha and Logy fights that feel more visceral, a bit heavier and longer. Also, if you’re dumb enough to destroy too many honeycombs before a major boss fight, you end up going from “oh, this is challenging” to “well, might as well just throw my Switch into a well.” Pretty clever environmental effect for a major fight.

Let’s be clear: Atelier Escha and Logy: Alchemists of the Dusk Sky is a very enjoyable and solid entry to the Atelier series, and is, by no means, the weakest of the titles. The Dusk series, in general, isn’t as loved as much as the others, but I really enjoy the land and tone that’s set forward in these games. The problem is not leaning enough into the darkness for my story tastes, and potentially drifting a bit too far from the game’s core values. I worry that the more we tack on to try and compound alchemy, the further we get from what makes the games appealing in the first place. If you loved Ayesha, you’re going to love this one, and if you like the idea of dude in the lead, this isn’t a bad place to start. You probably already got the games together in a set, so kick back, enjoy some mechanically inclined inventions, and figure out how this game ties the first and the third together.

The journey through the Dusk continues as Gust allows for players to try a first in the series and let a dude be at the helm of the adventure, if you want.