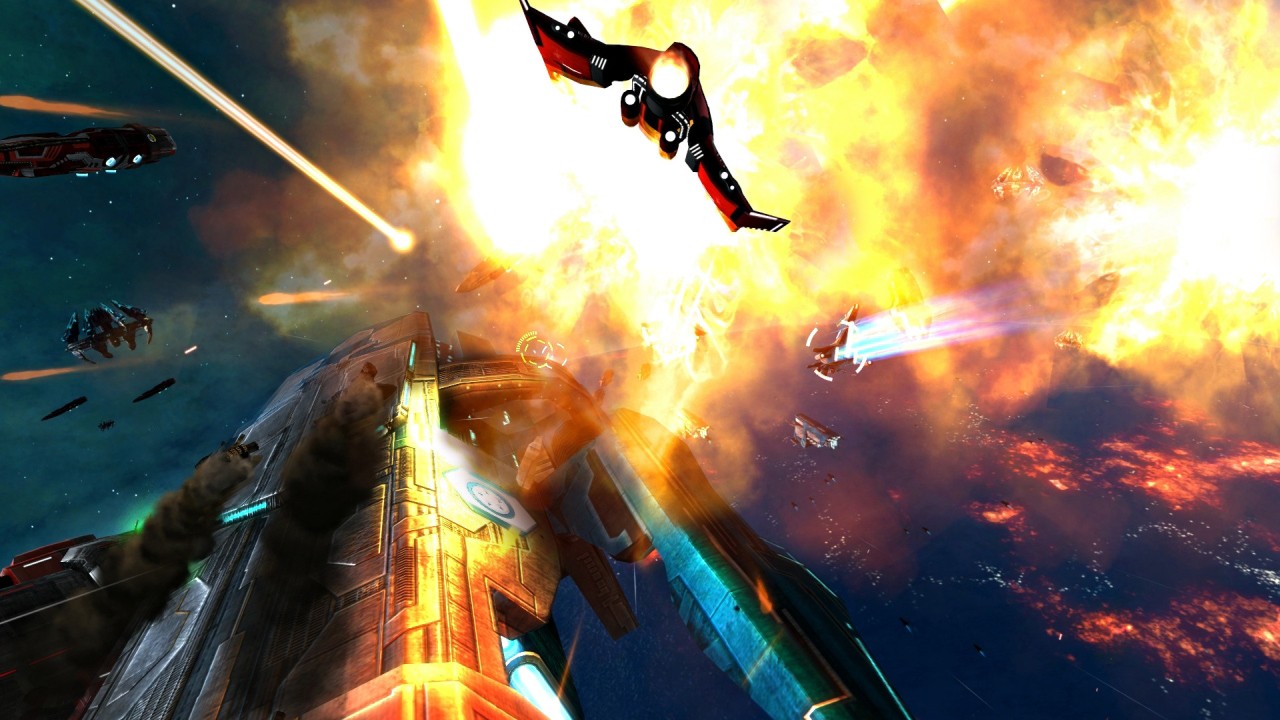 A space rail-shooter, Star Horizon follows the likes of Panzer Dragoon, Sin and Punishment, and most importantly Star Fox. Pitted against great titles like these, will this indie title manage to live up to these star titles or are they too far out in the horizon?

The story of Star Horizon revolves around a rebel uprising against an empire (well federation in this case), an original idea, I know. You play as a federation pilot John who survived an attack on the main mothership, with your AI companion Ellie (that controls 90% of the ship) you attempt to find your way back to the federation. Where the plot is not anything particularly special, a real highlight of Star Horizon is the banter between John and Ellie which genuinely made me chuckle a few times. Strangely though, interactions with other characters feels forced to be funny, making it feel weird when the other humour works so well. You have some control over the plot as, within some levels of Star Horizon, there are some optional choices about how to progress, most surrounding morality choices, creating variation in the levels. Where this is a nice touch, my bug bear with this is, instead of the new objective just appearing on the screen as you continue, the game pauses as it flashes up, which is ridiculous and stops the flow of gameplay; particularly as the decision appears in a 5 second straight flight that works well to keep the pace of the action going. Either way the plot does its job of providing narrative for the levels and that is all anyone can ask for. 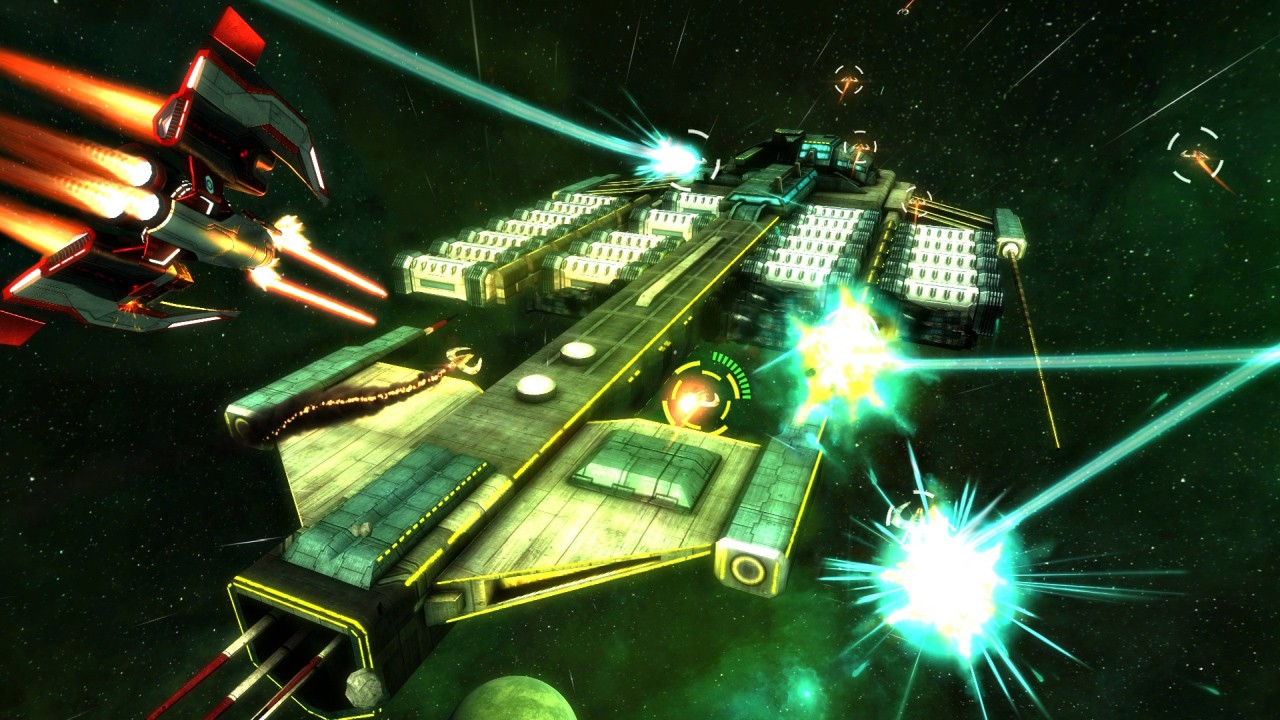 As with rail shooters, the player is pushed forward through a level as if on a track with freedom to move around the screen. Where it is generally dynamic and has elements of a rollercoaster at times, the player is placed in a way that it is hard to target enemies causing frustration at crucial points. Not only that, it doesn’t always work well with the targeting system. This involves moving so enemies appear in the crosshairs and once they are within it they will be auto-targeted. Generally, it works well yet, there can be a slight delay and the crosshairs have a tendency to latch to the middle section of the screen, making it difficult to aim for enemies on the edges of the screen. Worse than that, commonly enemies will start behind you and shoot you out of nowhere, in a real cheap shot move as the only way to dodge it is knowing beforehand when it is coming. Still moving around the screen is smooth and fluid, particularly as there is a great response from the analog stick making it easy to precisely move around the screen. There is also a Star Fox ‘barrel roll’ dodge to spin out of the way of obstacles and gun fire that can be smoothly incorporated into general movements. A player also has a choice of 3 weapons in the ship’s arsenal to take down enemies which are standard lasers, a lock-on missile, and cluster missiles. The latter two have a cool-down period with standard lasers having unlimited fire. Generally, it is a nice balance having those 3 options as it is easy to flip between them and encourages tactical use of the missiles as the cool-down period means you cannot over-rely on them.

There is also an upgrade system for the ship using credits for new parts to improve firepower or durability of the ship. Credits are earned through killing enemies and beating the levels for the first time. Replaying previous levels is encouraged because it can be challenging to progress through without any upgrades as the game goes on. Although there isn’t much of a balance between the credits and upgrade costs, leaving levels to be replayed a bit too much. This mainly is due to the fact credits aren’t earned purely for just beating the level a second time which is irritating. Even stranger, there is ranking based on performance upon completing a level, yet it means nothing in terms of credits. If anything it makes the ranking system pointless as it serves no real purpose other than just being there. It does make me wish that you keep credits gained from levels you don’t complete as, if you don’t beat a new level, it gets a bit annoying from how long it takes. 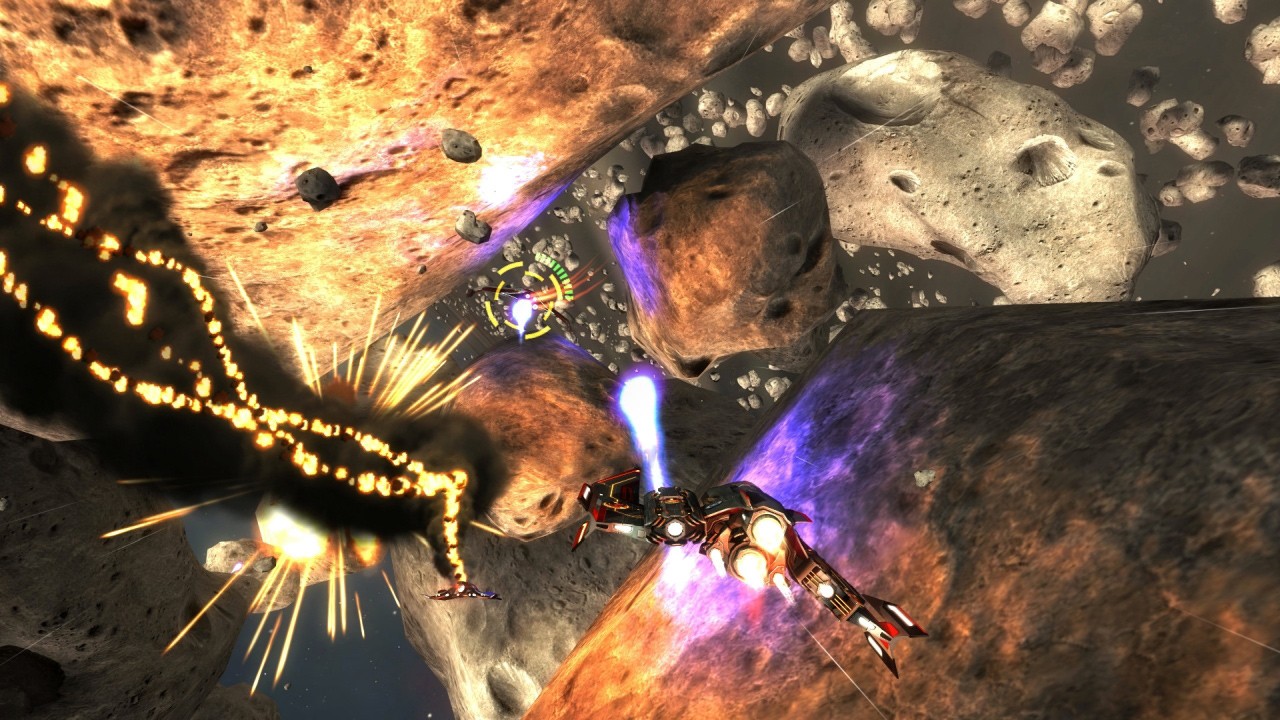 Star Horizon only contains 10 levels but these are made use of having different objective and play styles. Other than standard progression, there is destroying a set amount of enemies or objects, protecting allies, and so forth, which help to further separate each level from each other. There are checkpoints if you die although these are a double edge sword as on some levels it can make it harder to complete if you haven’t reached a specified amount on those objective levels making it impossible to beat. Where most of the game works fine, there is a major issue in how there are some bugs in the game mainly to do with these objectives. One I faced and couldn’t overcome was at the beginning involving destroying parts of a ship, however they don’t appear on the target screen making it unclear what I was meant to be destroying. Shooting anything and everything didn’t help as there was no response cues or I never managed to destroy any of the 6 targets. I resorted to even reopening and reinstalling the game, yet the issue still remained. There are also some other known bugs in other levels in the game which means a patch is needed sooner than later to make Star Horizon fully playable.

The last thing to talk about is the visuals which are hit and miss. Star Horizon has some great looking ships and backgrounds overall, particularly as despite all happening in space, each level has a distinct look to it. Sure, the ships aren’t particularly anything special in design, but added with a good sense of lighting it makes it truly look like you’re flying around in space. However, reality kicks in with the various meteors and space rocks as they look like they are from an older console game. Really this falls in line with the sound design of the game which again is nothing special. The soundtrack is just stereotypical space fighter music that is easily forgettable and gets zoned straight out. At least the voice acting is passable, although there aren’t any no stand out performances here. Personally, these are all things that could be overlooked as overall, Star Horizon has a nice look and sound to it but by no means is it distinctive.

Star Horizon is a pretty average space rail shooter, which can be equally enjoyable as frustrating. Where the ships look nice, some other aspects aren’t as visually appealing. There isn’t anything that makes Star Horizons stand-out and considering some parts of the game are broken, might be worth waiting for a patch before diving into this one.