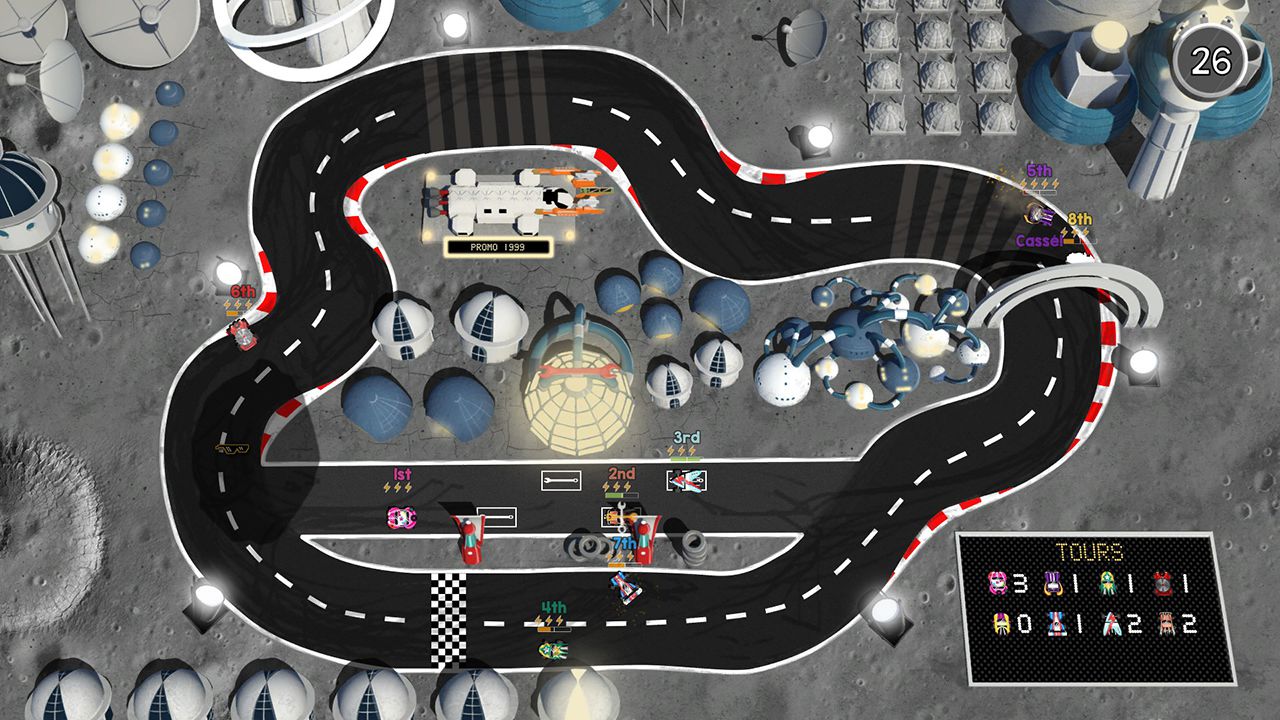 Vin Diesel once quoted in one of The Fast & Furious movies ‘This time, it ain’t just about being fast’. Never a truer word spoken, especially when it comes to BAFL or Brakes are for Losers, a new, retro-inspired, racing game that is hurtling its way onto the Nintendo Switch.

Developed by Oudidon and published by Playdius and Plug In Digital, this arcade-style racer pays homage to the eighties and the nineties, with its inspirations coming from titles such as Super Sprint and Championship Sprint. Viewed from a top-down perspective, you control a series of wacky-looking cars, from a selection of eight different vehicles, around a variety of tracks in different game modes, such as championships, time trials and perfect races; the difference with this game though, is you have no brakes!!

Straight out of the starting line, the game’s presentation screams arcade-racer at you; even instructing you to ‘insert coins’. It’s a nice little touch that brought out a smile in me; but it was one that soon turned into a frown as I fought to control my way around the game’s menu. I say menu, but I mean it loosely, as the game doesn’t really contain one; at least, not in the way that you would expect a game too. Its various options and game mode are selected by driving your vehicle into a series of bays or side streets. I know, it sounds nuts and that’s just the tip of the iceberg, believe me! The central screen presents you with a roundabout with two roads that branch to the left and to the right. Take a left and you’re presented with various bays that contain a number of single player challenges; namely the time trial and perfect race modes. Take a right and you have the option of a championship, quick race and custom modes. 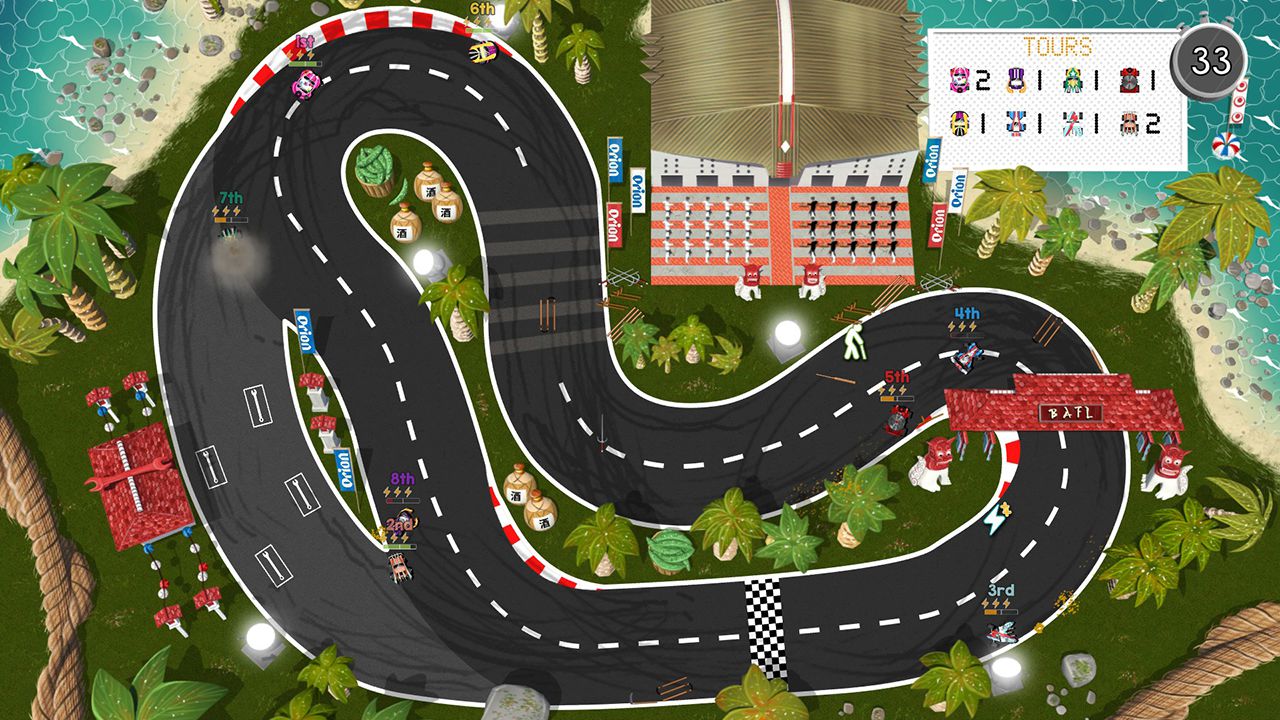 However, despite its uniqueness in this style of presentation, the handling of your vehicle, as well as not having any brakes, immediately found me overshooting my destination, careering into unwanted bays and quick-racing when I wanted to go to a championship. Not a good start! Along with these game modes, there is also a lay-by, in which you can change your current vehicle. Although aesthetically different, each of the cars on offer to you bear no difference performance wise, which doesn’t offer much of a variety apart from choosing a vehicle that you like the look of. The problem here is, though, that with your given viewpoint and the small size of the sprites, there isn’t really that much to look at with regards to the visual styles of the various vehicles. As you can see, before I had even started to play the game, I had distinctly hit a red-light within my expectations of what the game would present to me.

Anyway, if we take a right first, I’ll run you through the main staple of the game’s offerings: the racing. After a few wrong-turns, I proceeded up towards the championship mode. I was then presented with three choices of difficulty, another car selection and an option to add further players for the game’s local multiplayer element; a feature that caters for up to eight players. The championship itself consists of ten races around of variety of tracks; although some of these courses are merely mirrored. However, the order in which the tracks are selected is randomly generated each time you play, which is a nice feature. Rather than each race being lap-based, each round consists of a sixty-second countdown where, upon reaching zero, your racing position determines your finishing position and points placement; a concept I found strange in the mechanics of racing.

The style of the game, as well as having no brakes, creates a chaotic proceeding to the races. All of the vehicles hurtle themselves around the track, causing all sorts of mayhem as they career into walls, drive in the wrong direction and trigger a number of power-ups that lay scattered around the tracks. The scenery plays a part too, with off-track elements causing chaos, such as cannonballs on the track, passing clouds and over-flying spacecraft. It all adds to the madness on the track, which all combines to produce a suitably insane level of madness. However, there are also other features that hamper your ability to race, even though I’m not too sure that they are purposely set to do so. The vehicles themselves are so small, that they are difficult to distinguish from each other. In one particular race, I was controlling what I thought was my car, but the end of the race proved me otherwise. Despite this, I still finished in second place!! Each of the cars also displays their position and nitro-boosts available above their character models. This information adds to the obscurity of your vision; ultimately creating a visual mess of bumpered cars racing around a spiral to nowhere.

With no brakes fitted, the vehicles auto accelerate around the track. The only player type of interaction is to try to steer your way around the tracks. However, you merely spend the majority of time careening off walls and pulling into pit-stops. There’s no sense of control whatsoever, let alone a feeling of skill as you try to traverse around each of the tracks. Everything just feels a bit too random to make this an enjoyable racer; after all, isn’t racing all about skill? At the end of each race, you earn XP, which can then be used to upgrade your car. From steering to grip, acceleration and armour, these upgrades do add a little more to the feel of your car. However, once the championship is completed, these upgrades are completely disposed of; leaving you with sense of achieving nothing. It would have added a nice sense of depth to the game if these upgrades could be carried over to the next championship, race or challenge; but finishing a championship awards you with nothing that can be kept, thus nullifying any depth to the gameplay and making everything a worthless experience. 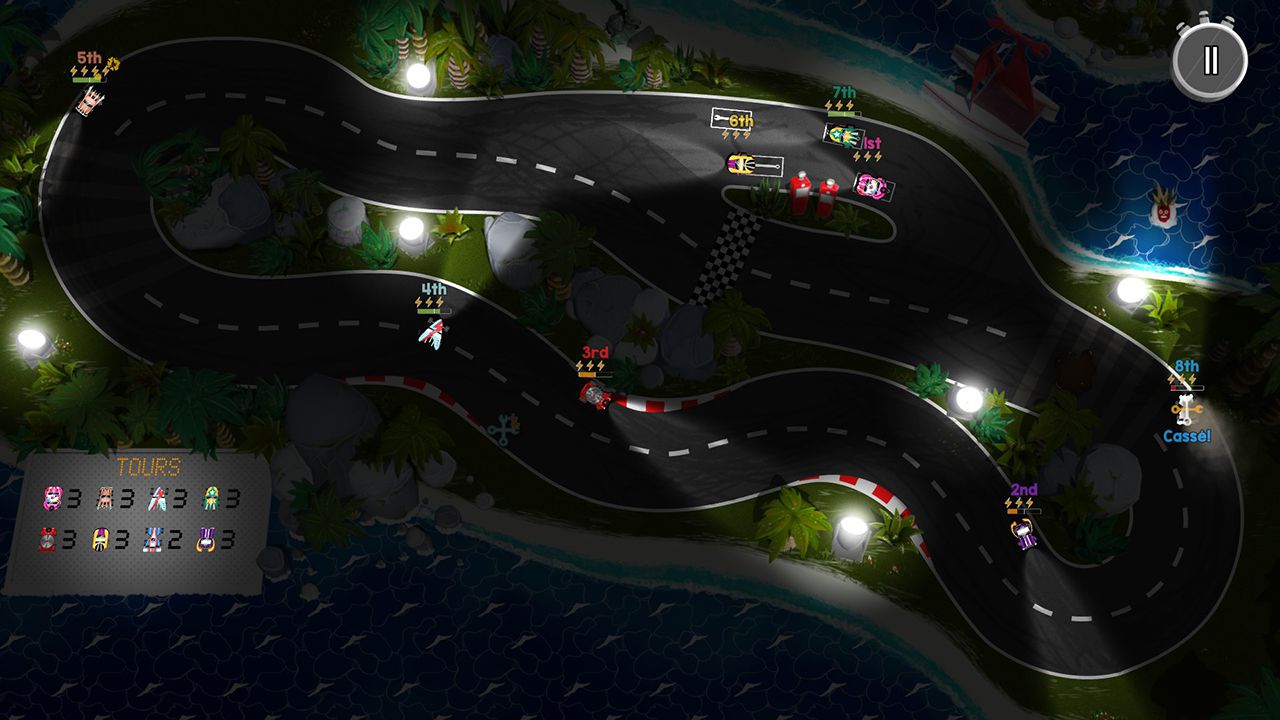 The multiplayer element does offer some form of a saving grace. I wasn’t able to participate in fully-manned, eight player race, but I did amass six of us, which led to some chaotic fun. Think Mario Kart on steroids and you’ll be guessing along the right lines. We did have some fun with this added element of more human interaction; however, it was an experience that soon wore thin, raising question marks within me over the long-term value of the game. It was now time to leave this neighbourhood, as I made a doughnut towards the other racing options that branched off in other directions. Quick Race was just that, a series of races that led to a nothingness and Custom Race presented me with a set of options with which I could create a more tailor-made experience. The options here were nice and varied; offering me championships, lapped races and last-man standing. Again, we had some fun in multiplayer trying out these different modes, but the ultimate feeling of racing for nothing was to repeat itself again.

So, next we take a left and check out the challenges that are on offer. This selection screen offered a cul-de-sac of various bays that contained different variations of race-courses. Each of the tracks contains two challenges: time-trial and perfect race. Time trial is simply that, a constant loop around a track in order to gain bragging rights with the fastest lap. You can choose to go it alone, or enjoy the company of a ghost, as you endlessly go round and round…and round and round. Perfect lap offers a mode that runs along the same premise as time-trial, however this feature requires the need to travel over set distances without crashing into the walls. With the omission of other cars, this was the only game mode that offered the player any form interaction with the requirement of skill. It possesses a real challenge in being awarded flags for traversing over the set distances, however, its novelty soon wears off as go round and round….and round and round; endlessly.

Unfortunately, as you may have guessed, I found the whole experience that BAFL had to offer a rather tiresome and lacklustre affair. I was a huge fan of Super Sprint in the arcades, even on the fabled ZX Spectrum, I had a lot enjoyment with the title. However, despite its inspirations, BAFL just fails to live up to the expectation of emulating the arcade games appeal. It’s not that this game is particularly bad, it does have its moments and there were times I genuinely had fun with it, but it was never for long and I suspect that there may well be a few other gamers who will experience the same. For a short period, there is some entertainment value in its production, but over the long-term and once you have figured out its mechanics, one that sees you competing for nothing with its severe lack of any worthwhile depth, it soon becomes a title that is pelting along at full-speed into a game that just feels empty. Never, has Vin Deisel been so right!