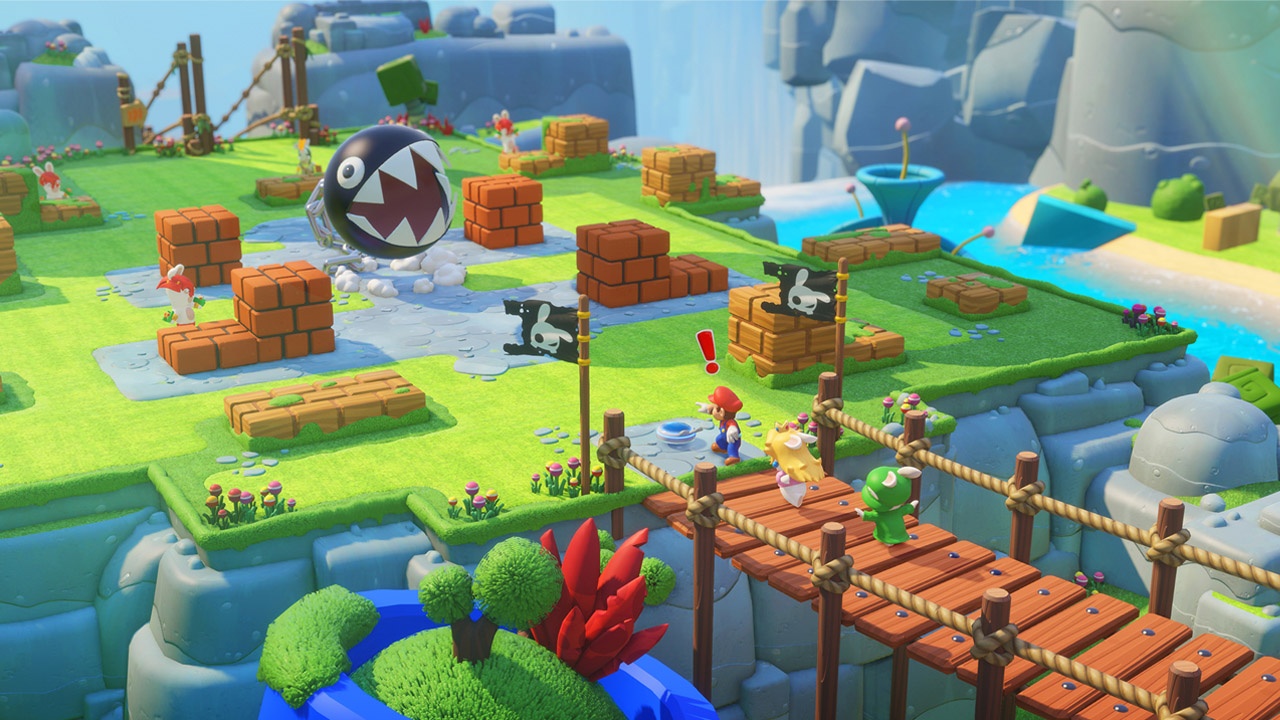 When Mario + Rabbids Kingdom Battle, an exclusive title for the Nintendo Switch, was announced, I was probably as surprised as Mario himself at being partnered up with Ubisoft’s hapless creations, but does this coalition of characters produce a game that is as peachy as a princess, or is it all just a bit ‘BWAH’?

The story begins with a young boy’s invention of the Supermerge; a device that can combine two items into one. However, chaos soon ensues when the Rabbids get their hands on it, resulting in a mergence of their world and the Mushroom Kingdom upon where Mario and his friends reside. It isn’t long before everything is soon turned upon its head and it’s left up to you, Mario and his new found friends to team up and bring some stability to the region again by finding ‘Spawny’, the rabbid in possession of the Supermerge and responsible for the mayhem that had ensued. But hey, at least Princess Peach hasn’t been kidnapped this time.

Primarily a tactical strategy game, one that is loosely based on the successful formula of X-Com’s turn-based gameplay, you guide a team of three heroes, including Mario himself, through four worlds that are split into ten chapters; each one containing one or two battles that you have to overcome. Using an array of weapons and abilities, each of them unlocked as you progress through the stages, you slide, leap and shoot your way through varying levels of corrupted Rabbids in a race against time to stop Spawny before Mario’s nemesis, Bowser Jr, finds him. 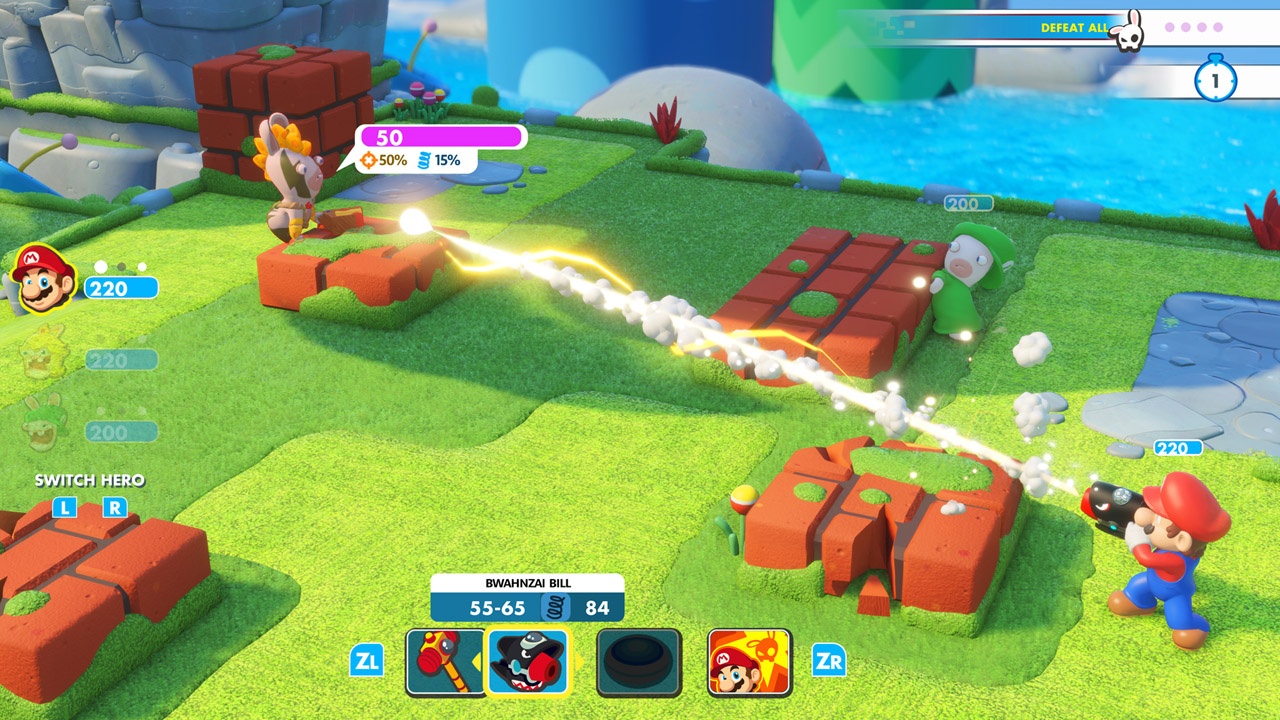 In order to succeed on your quest, you need to build a team from a roster of eight different characters, although not all of them are immediately accessible. These heroes range from the familiarity of Luigi and Princess Peach, to the more obscure such as the cosplay characters of Rabbids Luigi and Rabbids Peach; each one posing as their counterparts with hilarious results. Teamwork is an important element to the gameplay here, with each member complimenting each other; leaping from one character to another, thus expanding the field of movement, to head stomp onto an enemy before sliding into another and taking cover behind one of the many obstacles that decorate the landscape. From here, you take aim and fire your weapon; sticking, bouncing and inking your enemies into submission. The emphasis here, is to cause as much damage as possible before even firing a single shot.

Despite the complexities of this style of gameplay, and mainly thanks to the gentle guidance of the first few levels, you’ll soon find yourself marvelling as you chain together sequences of movements and attacks without difficulty that can make you feel like you have a team of invincible heroes on the battlefield. However, you shouldn’t make the mistake of falling into complacency here. This game has a clever knack of making you feel unbeatable before it throws in a level, or character, which tests you to the limits of your strategic and tactical thinking with a sudden spike in its challenges. However, with a growing roster of heroes and an arsenal to match, you’ll soon find a way to overcome these peaks in difficulty, albeit sometimes through a bit of trial and error. Each battle also offers the option of an ‘easy mode’, with a 50% increase in health, at the start of each level which can help and also make the game more accessible for younger players.

Between each of the battles, you guide Mario and his team around the various landscapes of Mushroom Kingdom seeking out hidden areas and treasure chests that contain all sorts of useful items to further boost your team’s abilities. These elements of exploration offer a refreshing respite from the tactical battles with each area being littered with many ‘laugh out loud’ moments amongst the scenery with toilet humour and underwear jokes that will appeal to all ages. 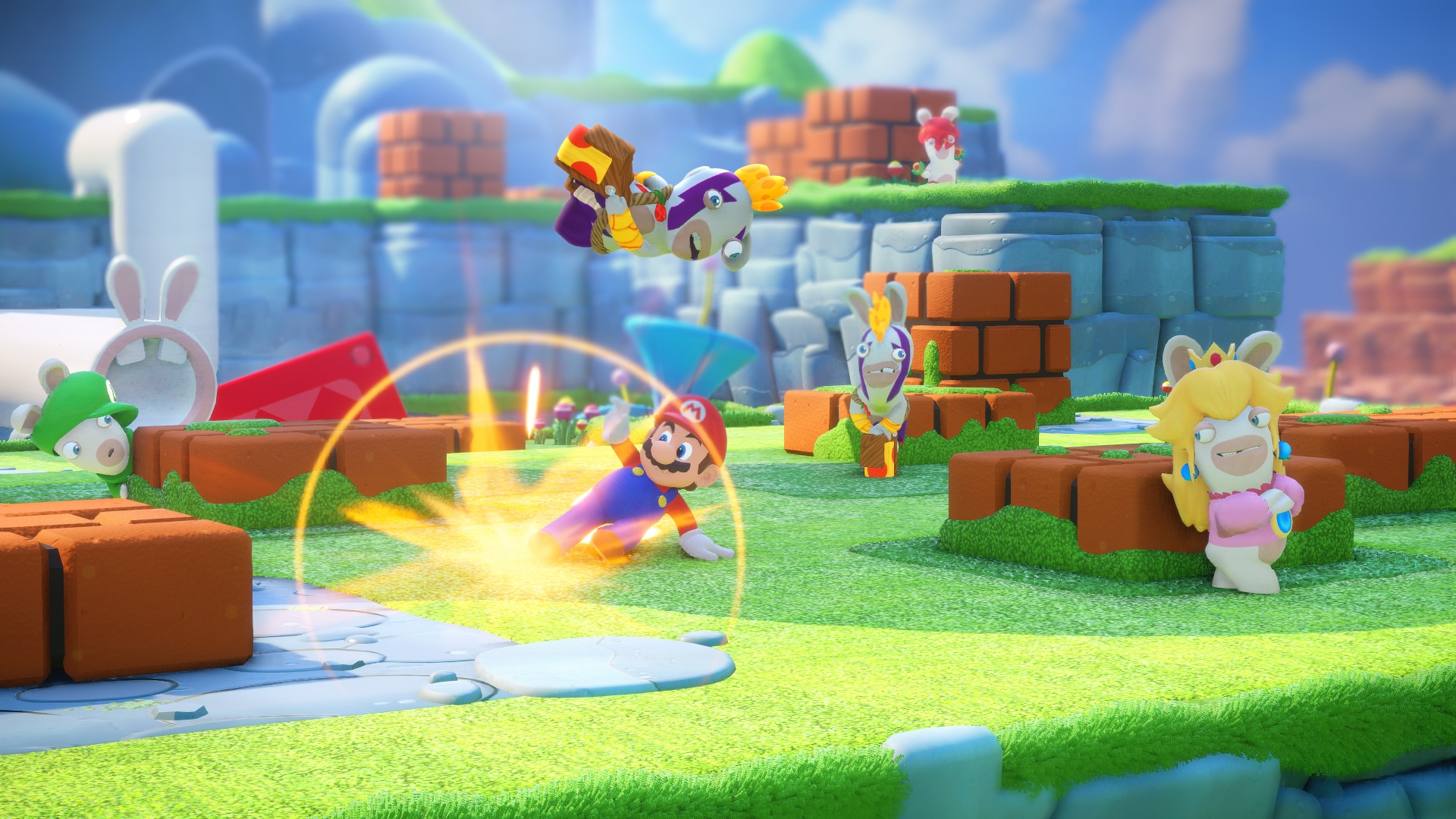 Once all of the battles have been completed within a level, you are free to explore the terrain again to find any missing treasures, secret levels or bonus items without the need for replaying any previously fought skirmishes, although there is an option to revisit these battles if you so wish in order to attain a better rating with a new, stronger, or different, party of heroes. These completed levels also offer new challenges which offer rewards to further boost the attributes of your characters. These elements of exploration, as well as the RPG-esque character upgrades, offer a lot of depth to the gameplay. Moving from battle to battle can begin to feel a repetitive at times, but these added features help to alleviate any staleness of gameplay and always offers the option of something new to experiment with.

Graphically, Mario + Rabbids is easily one of the standout titles on the Nintendo Switch. Each level is bright and bold with colourful graphics that ooze with the charm of Nintendo despite this being primarily a Ubisoft game. Each level offers different landscapes from the lush greenness of the ancient gardens to the fizz of the sherbert desert and the eeriness of spooky trails with a scenery that feels very different from the last, although the battles can fall into the trap of feeling a bit samey at times. Despite this, Mario + Rabbids is a game that feels fresh and new, mainly due to its unlikely partnering, and has been the winner of a number of critic and gaming awards. With a substantial single player offering and also a fun local multiplayer option which sees two players taking control of two heroes each, this game has a lot to offer for young and old gamers alike. I do feel that this has become a game that has fallen slightly under the radar amongst the fledgling library of the Switch, but in my opinion, this is very much a must have game for Nintendo’s flagship console. It certainly left me feeling peachy.