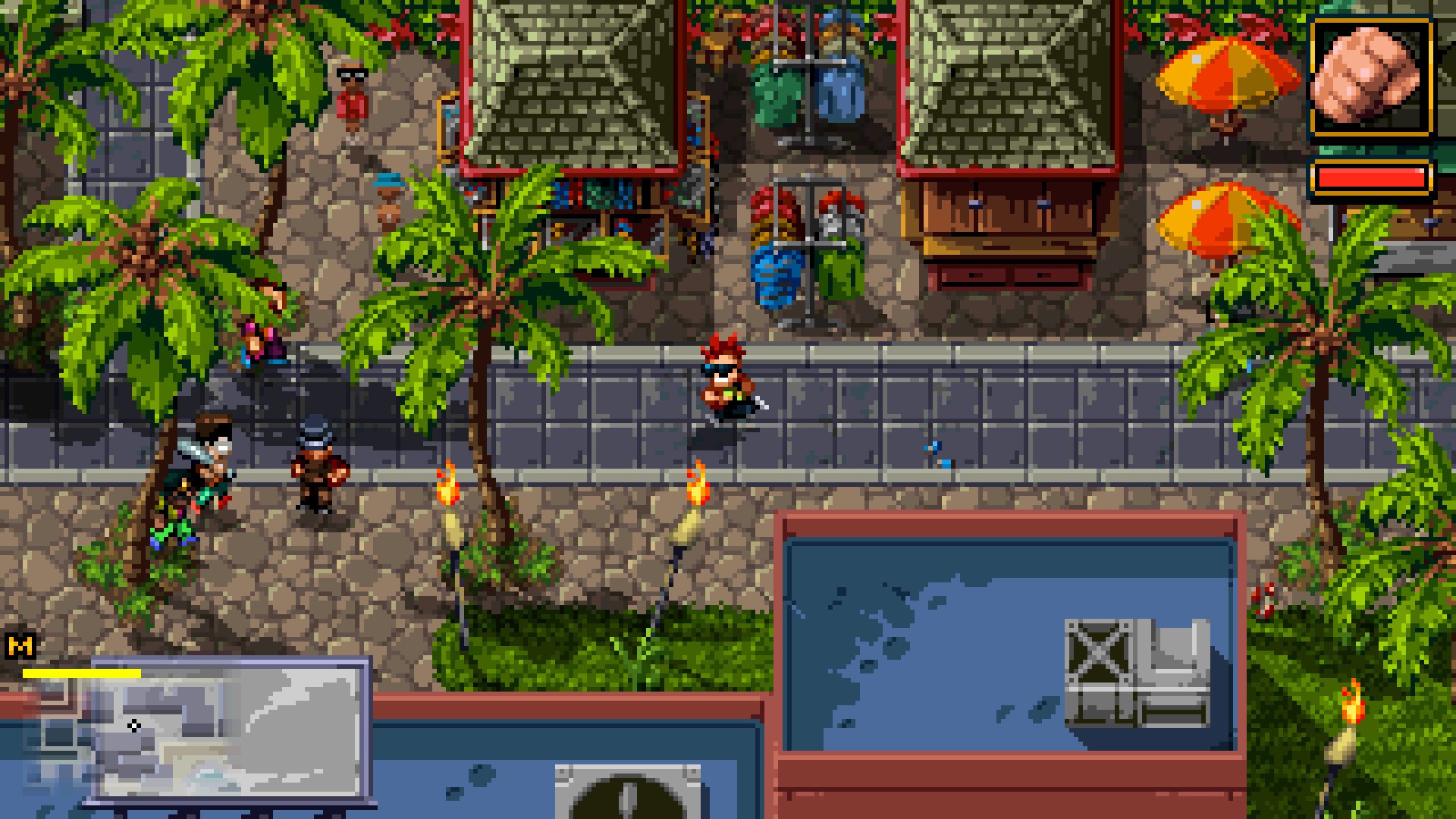 If I had a choice about getting back into the world of the video game industry, I think I’d want to work for VBlank Entertainment. There’s something about their mission statement and approach to gaming that I sincerely appreciate, and it continues to resonate throughout their limited but fantastic library. I’ve bought Retro City Rampage no fewer than four times now, and I’ll probably buy it again in the future. The fact that there was an effort not only to downsize the game to fit on a floppy disk, but to make it work on a 486 era computer AND sell the game on physical 3.5” makes me happy in a way that doesn’t have a sound. Ever since the release of their second title, Shakedown: Hawaii, I’ve watched it get ported to newer AND older consoles, including a physical release for the WiiU that I deeply regret missing. Now, with a Steam release, the floodgates are open, and the newest journey through the game era of excess begins on PCs around the world.

Shakedown: Hawaii is the spiritual successor to Retro City Rampage, though there’s very little connecting the two games in terms of story. The story centres around the failing multinational corporation known as Feeble, which was once a sprawling empire that’s now so deep in the red you’d think they respawned in Hades. The modern era of online shopping, video streaming and smartphone ride services have totally neutered Feeble’s entire monopoly. As important figures within the Feeble company, you simply cannot let this happen, and it’s up to the trio of the CEO, Scooter (his adult son) and The Consultant (clearly a fixer) to help get the company back on track. Will there be legitimate business deals? Of course, you need some way to make the whole operation track for the public eye! Will there be super illegal activities? Every step of the way, you can bet your ass.

Shakedown: Hawaii is the 16 bit equivalency to the delight that was Retro City Rampage with a few major differences. Once again, you’re hard at work in an open world with several tasks and story missions to work on (okay, over a hundred story missions) and plenty of wiggle room in the how and why you get these things accomplished. In order to rebuild the empire, the trio of Feeble Multinational will need to negotiate, purchase, bribe, extort and occasionally sabotage all around the island (you are in Hawaii, after all) while trying to actively not get arrested. There will be some missions where you’re saddled firmly in the POV of one specific character, and some where you’ll be bouncing between perspectives, moving different parts of the machine at different times. The most obvious part of the “wiggle room” is the classic Grand Theft Auto approach to things, but we’ll touch more upon that. I tested it out: it’s entirely possible to run multiple missions by sticking to the guidelines and committing zero crimes between point A and B, with the exception of when the mission itself is a crime. 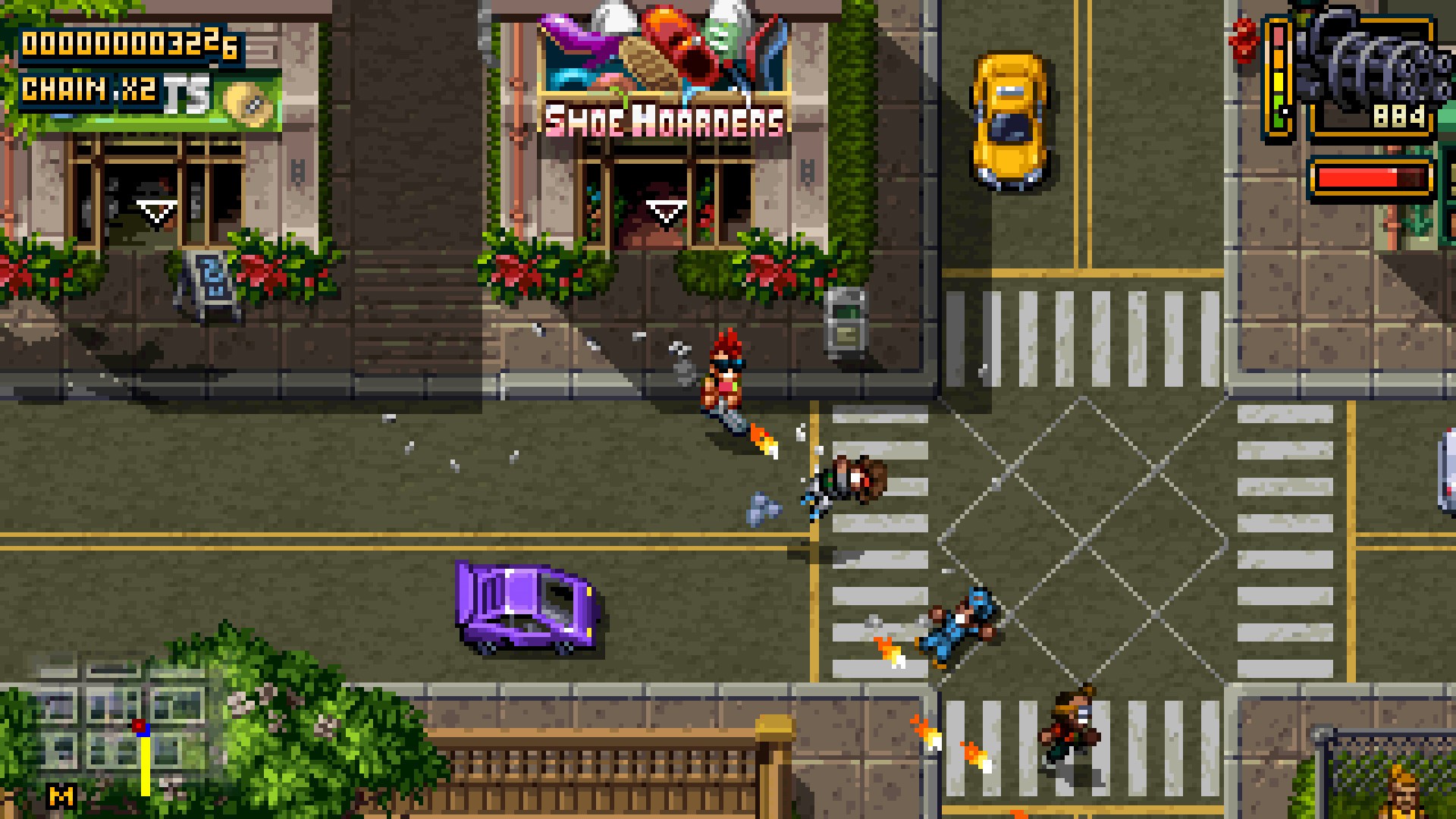 To no one’s surprise, Shakedown: Hawaii runs gloriously on the PC, and there’s zero reason that anyone with even a potato rig would have issues. With an install size under 150MB, VBlank took care and effort to make sure that this pixel perfect rendition of the 16 bit gangster era is one that has no excess in terms of wasted code or space. The colouring and shading is beautiful, fully capturing the elements of what gaming was like in the early to mid 90s and propelling me into a world of nostalgia and enjoyment. What’s really interesting is that the tone seemed to capture more of the Sega feel than the SNES, and I say that without any sort of disparagency. There were several titles that looked better on the Sega, and that’s just true. If you’ve ever had the joy of playing Pier Solar and the Great Architects, it has that same level of avatar attention and detail, plus some fantastic cut scene sequences that keep you on your toes.

Additionally, Shakedown: Hawaii is rocking a fantastic retro soundtrack, both in terms of sound effects and music. There was a lot of attention given to how the tone of the game shifts between when you’re deep in the city, out on the drive, and occasionally embroiled in more dramatic moments, like when your mission has found you in charge of sabotaging some military grade equipment. The game often sticks firmly in the land of synthwave and retro-inspired tracks that evoke the best of both video game 90s and the 80s era itself, essentially making an old school version of the clearest parallel, GTA: Vice City. You won’t be getting any speech packs for this title, but be sure to rock out to some really grooving tunes from start to finish, and you can always pipe in your own Flock of Seagulls if it’s that important to you.

The name of the game with Shakedown: Hawaii is a personalized approach. If players are dead set on being a completionist, you can roll through this top-down, 3rd person, open world jaunt in a few hours, and that’s not an exaggeration. Each mission can take anywhere from two to eight minutes, with many of them being pretty straightforward if you follow the map and the directions. As a result, some of the continual missions (like expanding the number of buildings you control or constantly destroying Amazon-inspired delivery trucks) don’t hold as much weight because you aren’t playing the game as long. Players can easily strong-arm their way through most of this, and the old school approach to dealing with police still applies as well. You see, one issue that old GTA games had was being able to basically ignore the police by ducking in and out of mission triggers, effectively glossing over the power of law enforcement entirely. The same is true here: you can be in a high stakes car chase, go FLYING out of your vehicle while it careens into a building, six officers are on foot actively shooting and chasing you, but everyone waits while you consult with your agent about what’s happening next. Let me make it clear: this is not a complaint, I love this level of disconnect. 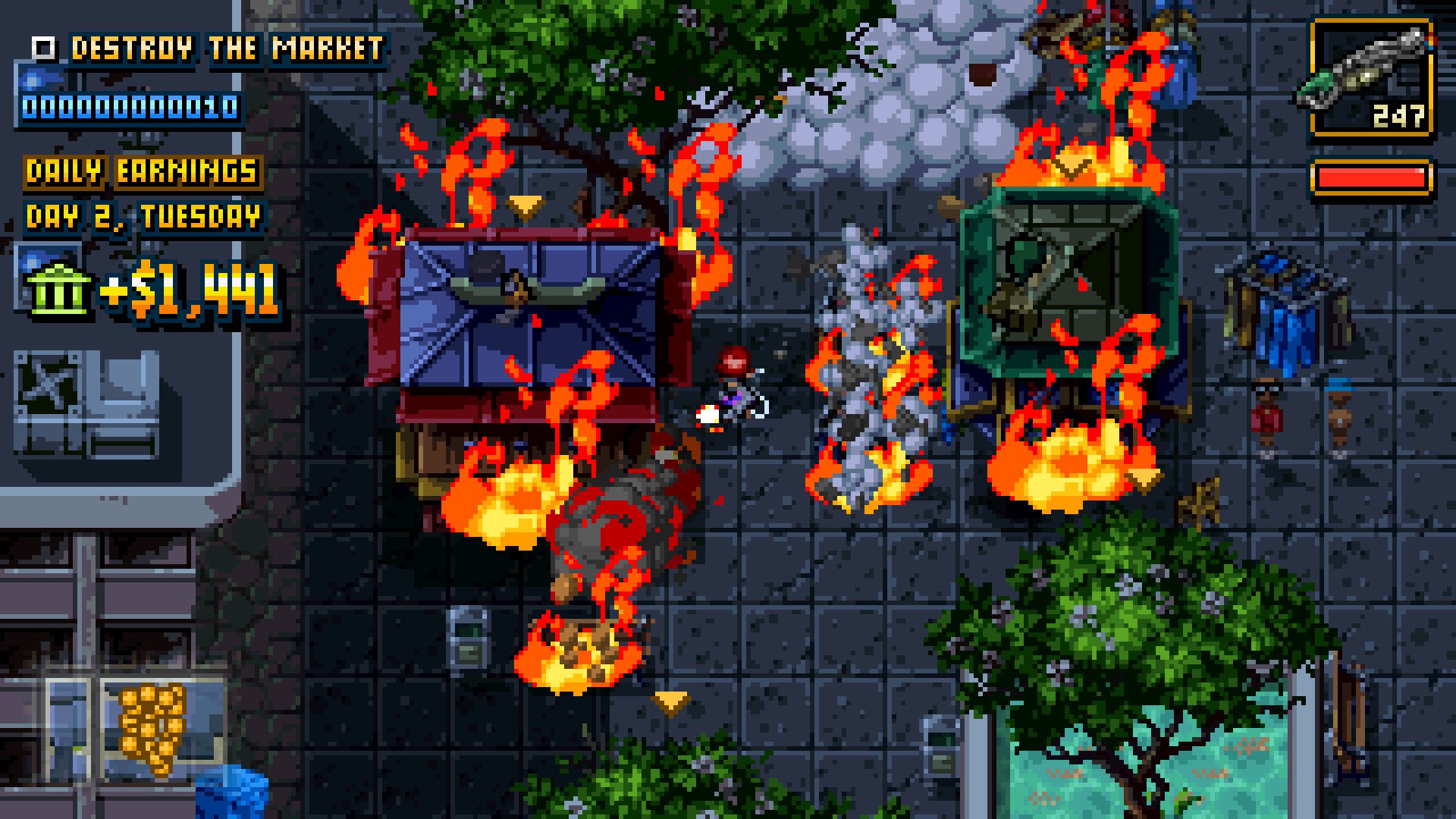 Shakedown: Hawaii gives players everything they could want and more out of this experience. You have your main mission mode that provides some endless number of actual story based activities while also driving towards a final goal and idea. You’ve got the arcade style events where you need to achieve certain targets, occasionally having the freedom to decide which character will provide you with the necessary gumption to be a success. And, if you’re just a chaotic entity hell bent on destruction, you can do free roaming mode, where you just steal the first vehicle you find and try to get a one hundred chain of vehicular homicide, because that’s what everyone ends up doing at some point in these types of games. There’s a shockingly great range of weapons and car choices, plus a lot of customization for fine tuning the clothes and attitude of your characters. You never run out of things to do within the game unless you fixate on doing something you literally cannot do, like gardening, and there are plenty of other games that allow that.

With either a controller or a keyboard, Shakedown: Hawaii performs magnificently, and the game that everyone loves to play will be a widespread joy for PC players everywhere. If you’ve already purchased Shakedown before on another console, I’m hard pressed to say why you should buy it a second time other than “support the devs.” I suppose the potential for mods or whatever, but I can’t imagine what could be hacked into this game. If you’ve never played it before, why be the schmuck who’s out here still playing GTA 5, when you could be rocking it out in an old school way with some new school attitude? We can’t take a real trip to Hawaii right now: might as well do a virtual one and earn a little profit in the process.

VBlank Entertainment once again rocks me to my core by proving that the modern gaming perspective can still be had with a classic style and presentation.