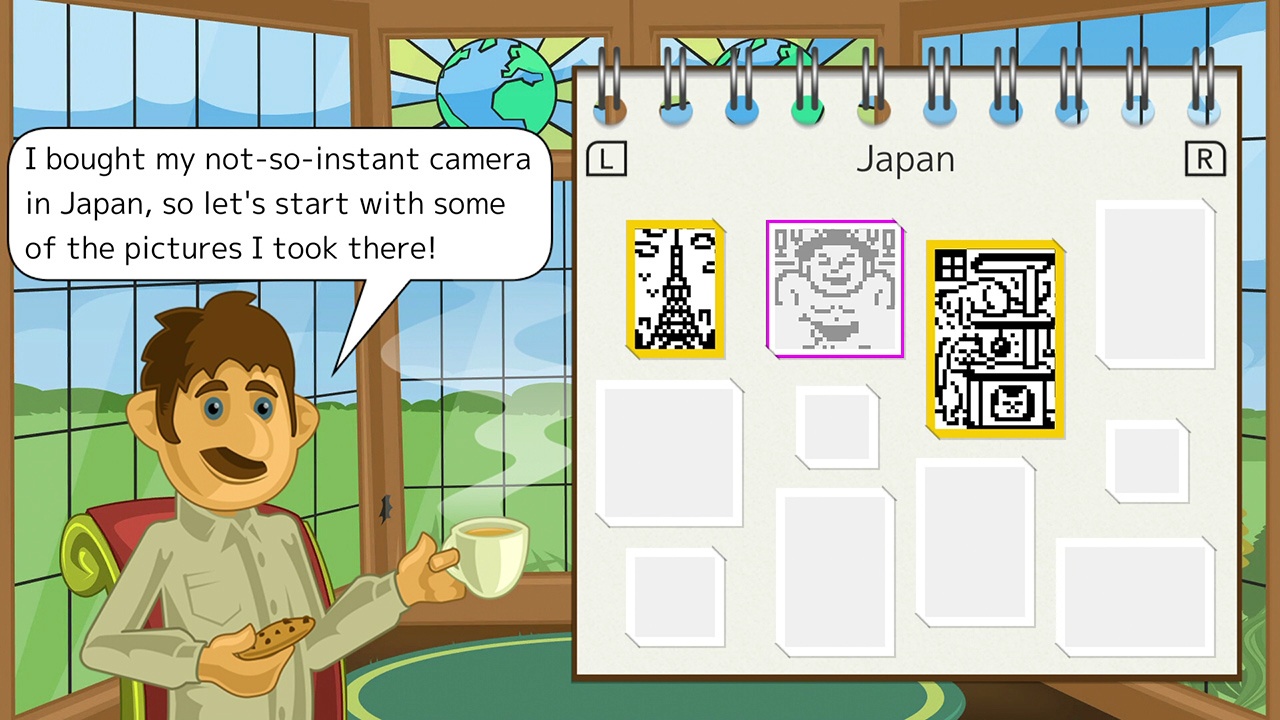 Every so often, a game comes along that either shows me something new, or gives me something to learn from. However, with Lightwood Games’ Fill-a-Pix: Phil’s Epic Adventure, out now on the Nintendo Switch, they have not only produced a game that introduced a new style of puzzling to me, but have also created a game that taught me something very important. It all started when I viewed some of the static screenshots for the game; it’s presentation reminding me of Link-a-Pix, another Lightwood Games title, and immediately evoking thoughts that it followed along the same premise. But oh, how I was wrong. It does contain some of its elements and loosely follows along the same themes. However, it’s mechanics are played in a very different style and was one that absolutely caught me off guard.

This puzzler revolves around a character named as Phil, who has just returned from a trip that has sent him around the world. With a biscuit in one hand and a cup of tea in the other, he then sets about showing you his photo album that is packed to the brim with around one-hundred and twenty photographs of his travels. The problem is, Phil used a not-so-instant camera and it’s now up to us to help him in developing the pictures, whilst dunking our rich tea and sipping our cuppas.

Each of the photos are presented within a variety of grids, some containing a thousand squares, that are littered with a variety of numbers. It looks like a cross between Minesweeper, Sudoku, Picross and the aforementioned, Link-a-Pix. The difference here though, is instead of linking the numbers, snake-like, with a series of filled-in squares, the clues here are representative of the number of squares that need to be filled, or made void, that surround the number in a grid of the nine surrounding squares. 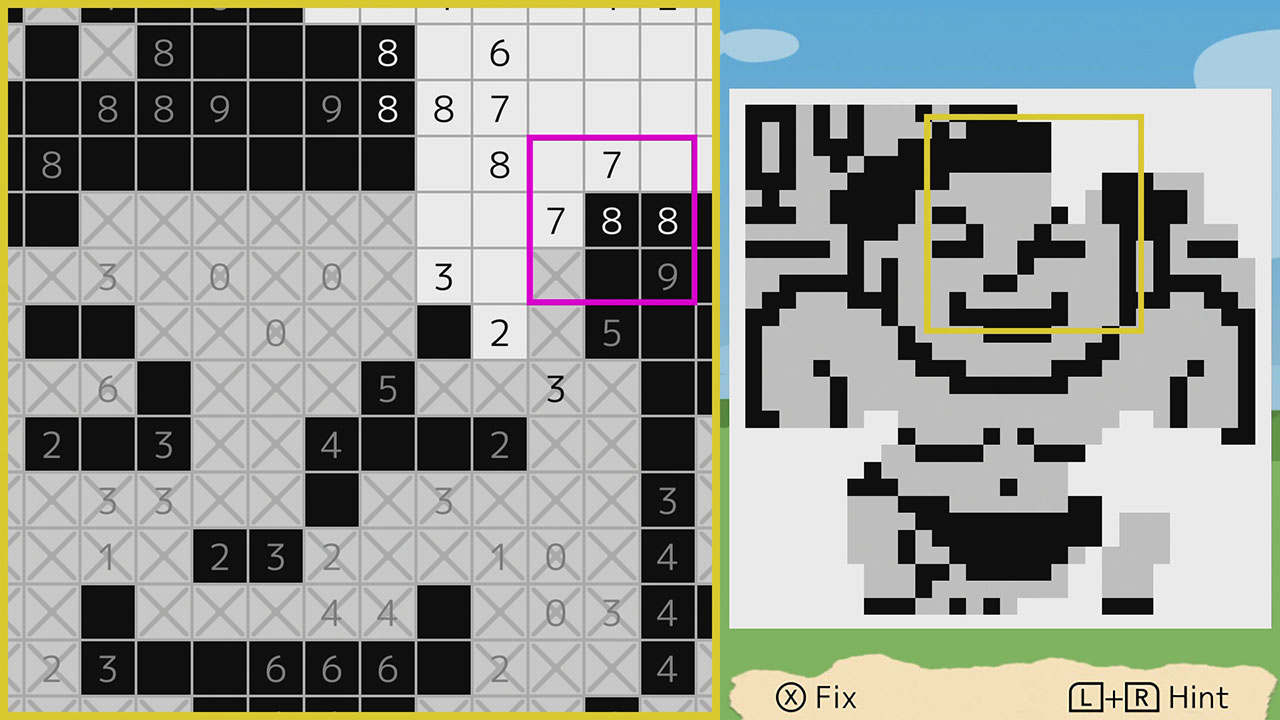 It sounds a little confusing and after working through the games tutorial, was a premise that left me even more baffled than I was before. You see, I was expecting a game that worked in the same way as Link-a-Pix and its distinctly different formula caught me by surprise. Although the games tutorial does it’s best to explain the mechanics of the game, it’s quite a difficult set of instructions to get across without sounding complicated. So I set about working my way through some of the photo’s that cover a variety of countries such as England, Japan, Australia and Egypt, to name but a few.

My lack of knowledge began to show though, and I worked my way through mistake after mistake, not gaining any headway in what I was supposed to be doing. Even a handy error finder, that finds and corrects any wrong moves didn’t help me to figure out how to properly play the game. My immediate thoughts were of a game worthy only of a one or two rating; slamming its fate into the depths of forgettable indies. But that was when it finally hit me; the moment of Eureka when I discovered how the game should be played and it was here, that Phil’s photo album, and the game, finally opened themselves up to me.

With each of the numbers working on a three-by-three grid, with it’s total number of filled squares in the middle, as well as an inclusion of its figure, it was important to take little steps at first by finding a starting point on which to base the rest of the puzzle. This is achieved by scanning through the grid and finding the highest and lowest base values; in this case the numbers nine and zero. With a nine, then it’s grid of nine squares need to be filled and with a zero, then it’s surrounding grid needs to be filled as a void. From here, you can then use deduction to work out a pattern for the remaining numbers, forming a picture that grows with the confidence you find in working out its solutions. 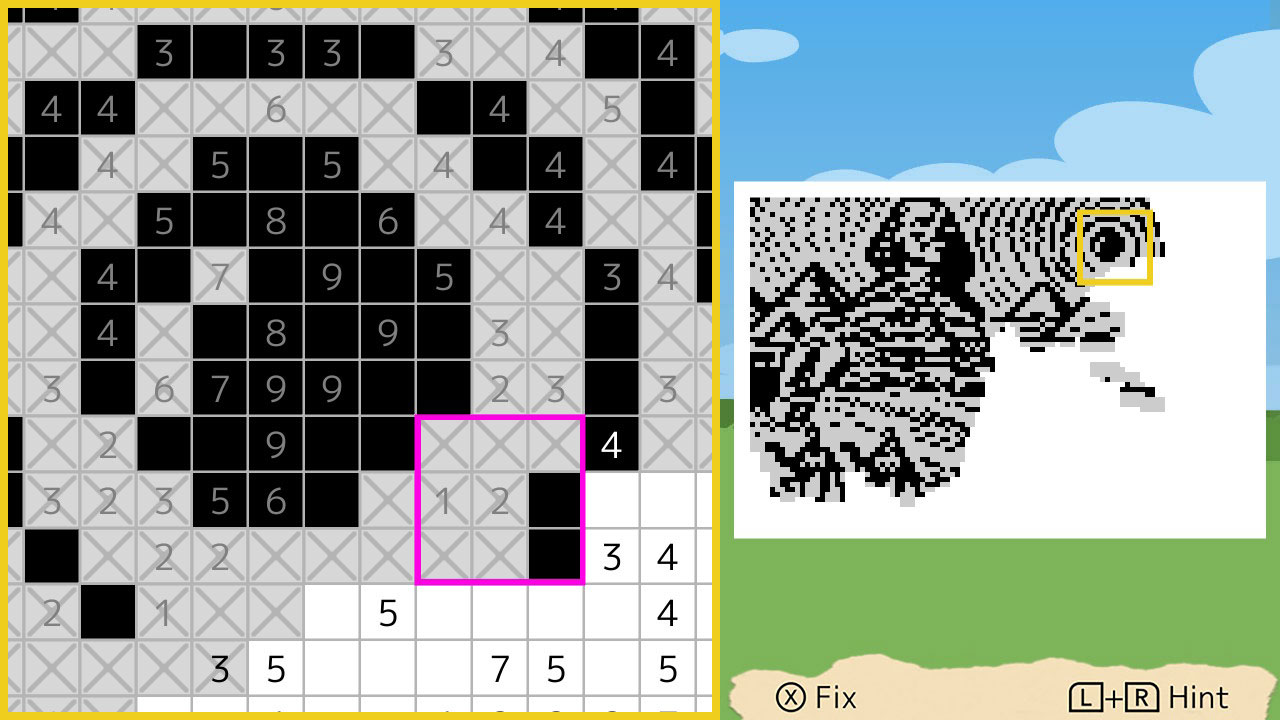 I know it still sounds complicated, but believe me, it’s really not; unless you want to make it that way, which obviously you can. By using a single-squared cursor, you can work through each puzzle, one square at a time. It’s a very difficult premise that offers an excruciating challenge. However, the game’s error checker can find any mistakes and correct them for you; but this comes at the expense of not gaining the coveted gold border for your finished picture. However, the game’s genius comes in the form of a Smart Cursor, one that covers a three-by-three grid and, by placing the total figure within its centre, fills in, or voids, the required blocks around it. But only if you have filled in the majority of its values.

However, it does take away the challenge with completing each picture, but it also produces a satisfying mechanic that promotes a sense of joy as you begin to develop the photograph before you. In essence, what it does is creates two variations within the same game; either a tough challenge that is head-bangingly difficult, or a relaxed ride through the wonders and sights of the world; yet both producing an immense feeling of satisfaction within their mechanics. It’s here, where the fun of this title can be had, as the joy comes from watching the pixel-art pictures come to life in front of you and begin to fill the pages of Phil’s Photo album.

If you’re looking for a casual, easy-going experience, then Fill-a-Pix: Phil’s Epic Adventure will give you that, just as it will also give you a challenging set of puzzles to work through if you so require. It presents a nice choice that offers a good balance to a wider range of audience. Whatever way you choose to play though, it’s the joy that the game promotes as you watch the pictures develop before you’re eyes, much like the premise of Fill-a-Pix does. It’s original concept on a tried-and-tested formula, produces a unique experience that I wasn’t expecting, yet is surprisingly satisfying in its execution. But also, at the same time, this is a game that has taught me to never judge a game on first impressions, something a reviewer should never do anyway, as it may just open up and surprise you with what it has inside.