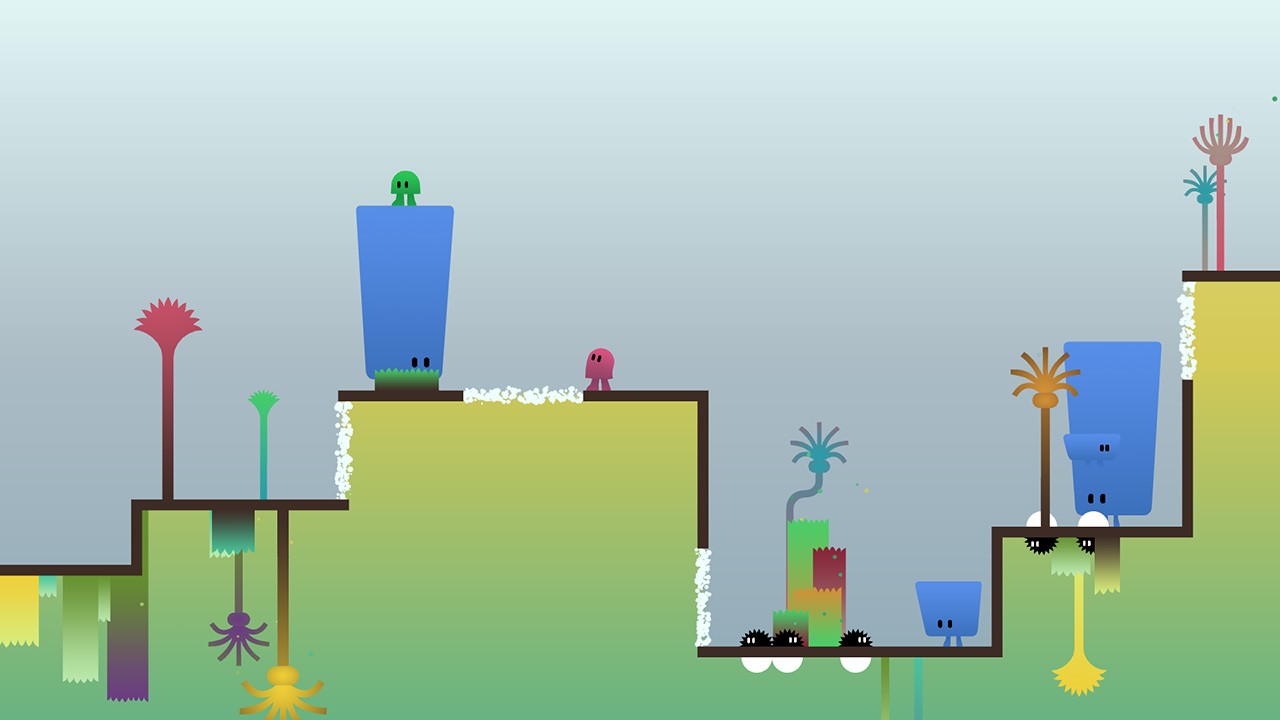 Never in my gaming life have I felt so dependent on another player (other than the Dark Souls series when playing online against a typically tricky boss). That’s my initial impression of ibb & obb (intentionally lowercase) for two reasons. First; their skills are essential to getting anywhere in the game and two; without another player, ibb & obb is very much redundant.

In this case, I had to rely on another member of the household to jump in and assist. I was mildly successful in recruiting my non-gaming wife, with false promises of completing all the arduous chores in the house for a whole week. Of course, I would do that without the incentive of her input in the game, but these were desperate measures and online play was a little unreliable, what with this being a new title and all. Despite having a loading screen where you can hop about while waiting to connect with a stranger, I was unable to find anyone else online, hence the predicament of locating someone else in the house. The dog was very much up for it, but opposable thumbs and all.

So, ibb & obb is a local multiplayer puzzle game. Local play is always my preference, but in this case, my gameplay experience was a little limited as you can’t solo-play the game. Once over this initial hurdle, however, ibb & obb is a pleasurable experience – first, the vibrant colours that are easy on the eye and secondly the somewhat peaceful soundtrack that you’re most likely to hear as a backing track for a mindfulness podcast or similar. ibb & obb is a pretty game. I haven’t seen such a great use of gradients since Adobe Photoshop 7 or barbers styling Batman logos onto the head of any 90s kid whose parents say “Well, if your friends are getting them…”. 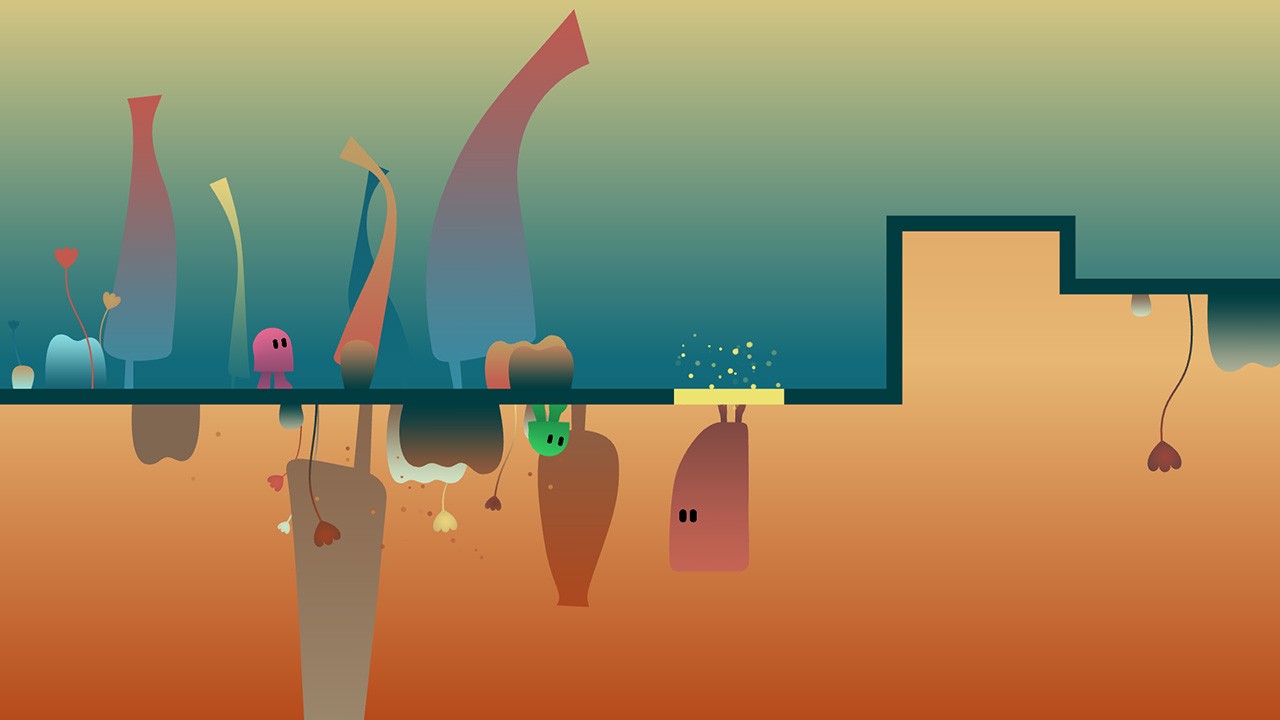 The gameplay focuses on cooperative play, and without your partner, your existence is meaningless. What that means in game terms is if one of you dies, i.e. get hit by a baddie, the other player will burst into digital confetti. A little like Snipperclips: Cut It Out Together! you can jump onto one another’s head to reach higher platforms, but the real selling point of the problem solving and just sheer fun, is the switching of gravity. Throughout the levels are these portals that resemble a mild digital bubble bath. When you jump through one, your player will be walking on the opposite side of the platform you were just standing on.

The point of this mechanic is to be able to take out enemies as they can only be defeated on one side. In a typical platform manner, you jump on the baddie to kill them, but often they have a smooth side and a spikey side. You can guess what happens with the latter. It’s like an adorable version of The Upside Down from Stranger Things, only no demogorgons. Least, none that I encountered – they were all too cute! Other times you need to jump through the portal to give a sort of alley-oop to the other player by jumping under springboards that causes them to launch higher into the air.

Forgive the cheap play on words, but ibb & obb, though seemingly cute, is no walk in the park. At times, the screen seems a little chaotic in the use of colours and the number of portals you go through. Initially, their purpose is simple – to piggyback off an enemy or to reach a greater height, but they eventually morph into devices and complicated puzzles that only ibb & obb can go through, to flip them ‘the correct way up’, so they can reach the end of the level. While chaotic at times, it’s oh so pleasant, thanks to the graphics and comforting soundtrack. It’s quite amazing how many characters these little guys have when all they have are legs and eyes. 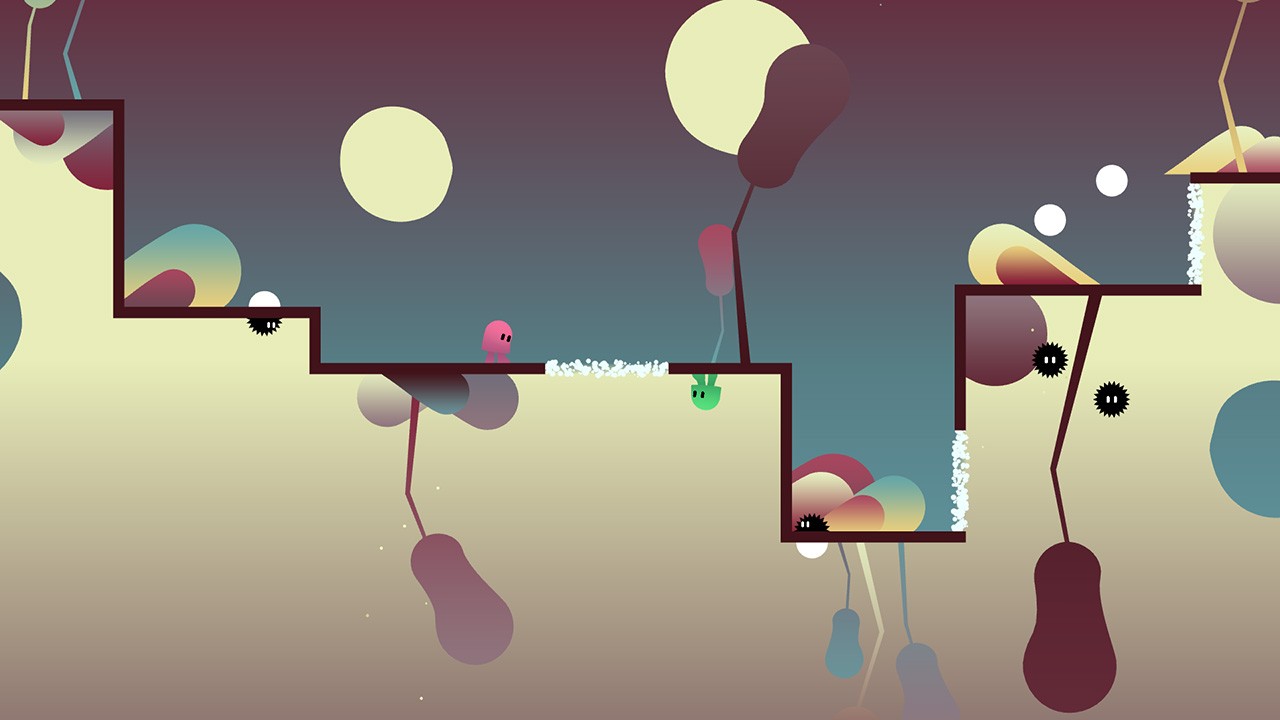 There isn’t any real driving force to the game other than the cooperation of your fellow player. ibb & obb feels more of an experience and not a typical narrative of enchanted castles or zombie apocalypses. But, considering the main focal point is co-op play, it does this part very well. Without being able to give a proper appraisal on online play, playing locally is great. It doesn’t have the same frustration as Snipperclips: Cut It Out Together! as the difficulty isn’t the same and doesn’t feel as claustrophobic when coming up with ideas on how to solve a problem. ibb & obb is much more fluid, and unlike a game such as Super Mario Maker 2, or any other co-op Mario game, you aren’t secretly competing with one another and should the other player get left behind, you both suffer the consequences. You’re less likely to have a falling out with this playthrough.

There are 15 levels in total with plenty more hidden worlds which come to a grand total of 8. I only know this as it said it on the blurb. I haven’t found all these worlds, so wouldn’t have known otherwise. You can play in tabletop mode or in docked – the only way you would play this portable is if you were online. Joy-cons need to be detached to play, but there is a setup to connect two machines together. This sounds like a decent feature, but it’s more common than it appears. From my viewpoint, all multiplayer gaming is done through the dock and very, very rarely played in tabletop mode. Then again, if you have a pal that can play locally with you on the go who also has the game and a Nintendo Switch? Well, you’re catered for.

Other than local and online play, the options include the configuration of controllers, volume settings and controller vibration and online leaderboards. The latter was a little sparse with other much more equipped reviewers obtaining enviable scores. I wasn’t prepared to air my dirty laundry in public and show myself up – at least do it anonymously! Let’s say my results were… adequate. Leaderboards aren’t a dealbreaker as ibb & obb, despite the co-op element, doesn’t feel like a competitive game, more a bonding experience and whether you are as patient as you think you are.

Exclusively a two-player game, unless you set up two controllers and switch between the two every so often (that’s quite sad), you’re going to need a friend to play this one, or for when the online community picks up. A very pleasant experience with some enjoyable puzzles, but the real stand out point is teamwork.