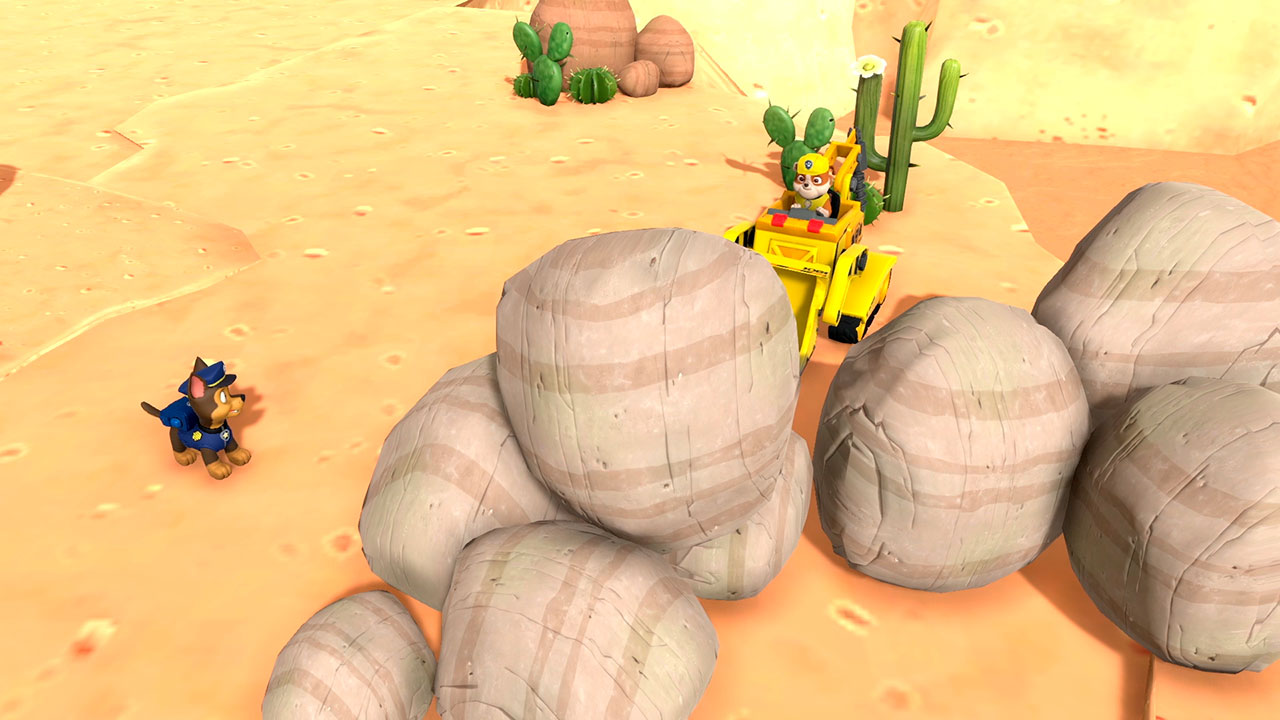 The longer I live my life and continue to play video games, the more I start to realize the why of certain things. Take, for example, games that license movies that make no sense. Like Darkman. Darkman was such a goddamn good movie that was straight up dark as hell, and it got turned into a very mediocre side-scrolling beat em up, similar to Batman at the time. Why did we do it? To emulate the movie for the kids who had seen the film that was very, very explicitly not intended for them. But I get it: kids have needs and wants, and many have terrible parents who’ll cave at the drop of a hat just to shut them up. So I totally understood why there was a Paw Patrol game coming to the Switch, but I didn’t anticipate what kind of game it was. But, having put a few hours into it with my kids, I finally get it: children’s video games are just another great extension of licensed playtime, with the added bonus of getting young ones ready for a great future with actual video games.

Paw Patrol: On A Roll takes place inside the Paw Patrol HQ, and Ryder (the human dispatcher/owner of all the dogs) is there to assign several pups to rescue various people and animals. For those who don’t know, Paw Patrol is a Canadian cartoon about a bunch of dogs who all drive tricked out rigs, have a ton of tech, can all talk and spend every waking moment saving the people and animals of Adventure Bay. There’s full grown adults who can’t solve simple riddles without a Dalmatian intervening, a couple of young kids with absolute death wishes, and just a never-ending parade of cute animals who will probably die or starve if Chase, Marshal, Rubble and the rest don’t swoop in and save the day. I’d never say this to my kids, but why the hell doesn’t such a dangerous place have real humans to help out, like a fire department, or a police force, or even just a group of volunteers that isn’t another kid with a group of even less helpful animals? Anyways, the pups set out to help whomever is in trouble across a series of missions (I think ten or eleven) and that’s pretty much it.

Now, each mission of Paw Patrol, to the game’s credit, has a mixture of events, terrains and ways to accomplish the goal. You usually start as one pup, and will change to another or possibly even two more as the level progresses onward. It’s a side-scrolling platformer, with the chief objective to just get to the animals in trouble and help them out. In the process, kids will have opportunities to do simple commands like pull on ropes to open doors or double jump to get to difficult platforms. Additionally, you’ll be able to use everyone’s trademark powers (Marshall’s water cannons or Sky’s Jetpack) and even “yelp for help” to summon other pups to do things for you. This interface presents a lot like the Mousekatools that are used in the Mickey Mouse Clubhouse, which is a great reference for parents and will mean absolutely nothing to the rest of you. Basically you will encounter a moment where you need to do something, you’ll have three choices, and you won’t be penalized if you chose two wrong ones. The kids can’t lose. 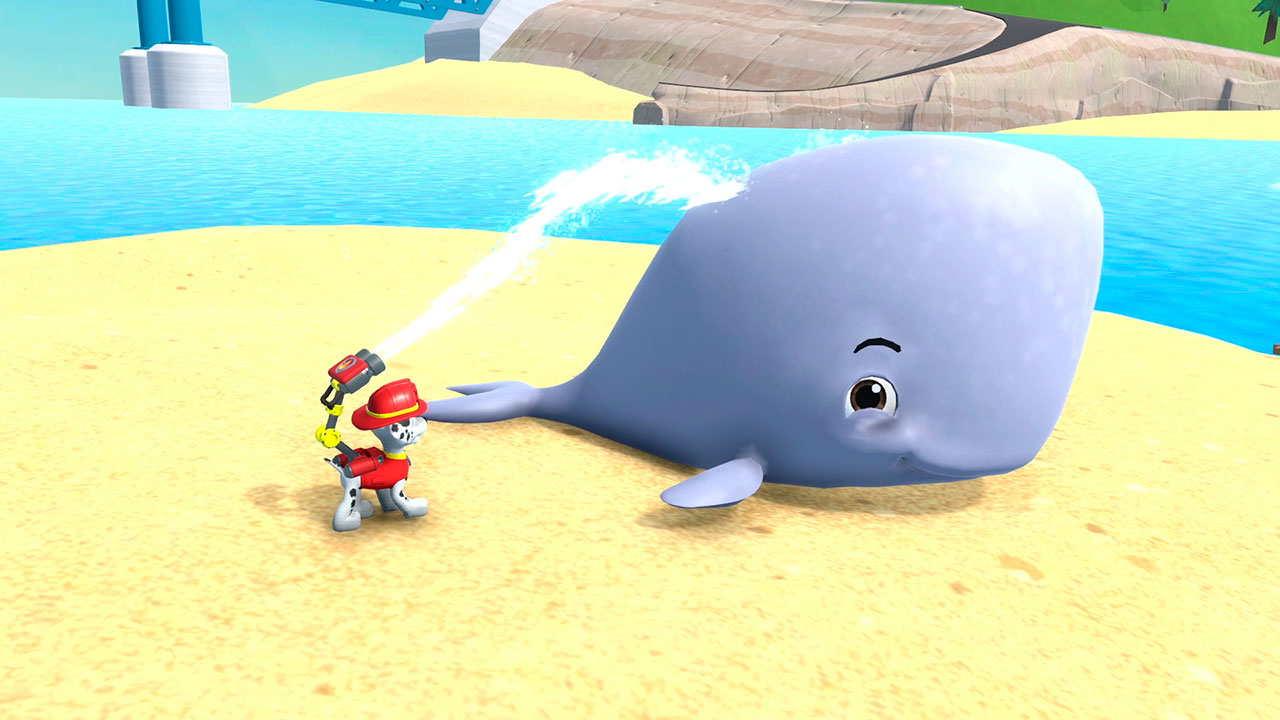 Paw Patrol: On A Roll does a good job of locking in children with a sense of victory through a couple of basic steps. First, there’s technically no way to lose the missions. As long as you keep moving forward, there’s no obstacle that can’t be beaten through the tenants of walking and jumping. No mission has a complex enough layout that someone could get stuck indefinitely, though, depending on the age, a parent might need to give advice or even grab the JoyCons for a moment to assist. Ryder gives constant assurance and input as to what should be happening, so that way kids won’t get mixed up when they might want to hit a different button, swim down when they should swim up, or ignore the basic ways to continue onwards. When you get a chance to use a pup’s special technology, it changes a bit, allowing you to spray water, chase sheep and arrange items with a minimal of variants (as not to create confusion). I will say that Ryder’s voiceover comes on a bit too much, to the point where my older daughter was visibly frustrated with how much he kept telling her not to fly into the clouds or the bird (during a flight sequence). If there was an option to turn him off, that’d be great, but I know it won’t happen because my younger daughter loved having Ryder talk to her like she was a pup.

Secondly, the game poses a fair amount of replay value for young children. Paw Patrol: On A Roll has two sets of collectibles throughout the missions that kids will want to try to get. First are the giant Patrol Badges, which are massive gold emblems that you couldn’t miss if the tv screen was turned off. Getting all five of these unlocks a bit of artwork at the end that usually shows your pup (or pups) with the successful rescue. These get saved to the SD card through screenshots and then you need to print them out to hang on their walls (may differ between families). But each mission also has a whopping two hundred Pup Treats to find, and this is where things get tricky. You are awarded either a bronze, silver, gold or platinum additional badge at the end of the level, with platinum saying that you’ve 100% completed the mission. Guess what: Paw Patrol actually put some of the Treats in hard-to-reach spots based on the original  “walk forward” principle. Kids will need to fully explore a level, actually going up and down, take wrong turns in the corn maze, and be on point with their vehicle control in order to get all the treats. Even I needed to redo levels a couple of times (didn’t take too long) to get everything because I got 199 and that was like a black eye in the face of my children. Not today, Paw Patrol: Papa gets platinum. And you know when you do it right, because, holy crap, this game has achievements. If ever NIntendo were to implement an online achievement system, now would be the time: bragging to cousins that we got perfect scores on Paw Patrol would spur sales and rivalry that you haven’t seen since the Crusades. 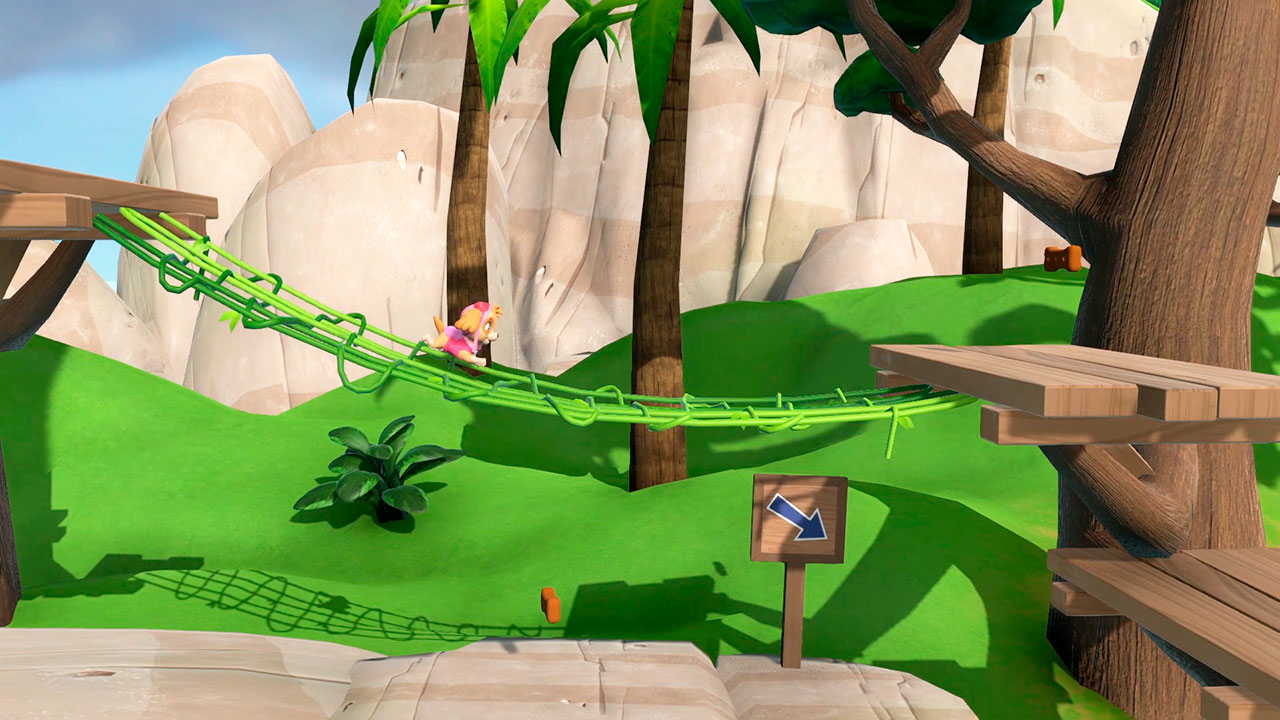 Visually and aurally, Paw Patrol: On A Roll is exactly what you’d imagine it’d be. All the voices from the show have been baked in (though I honestly don’t know which number Ryder we’re on at this point). Everyone has their tag lines that they drop in on occasion (This pup’s gotta fly! Rubble on the double! I can’t believe it’s not butter!) to the delight of everyone in the room. Additionally, the graphics are seriously well handled: the scenes between the sidescrolling looks like they might come from webisodes of Paw Patrol (you know, some effort was put in, but not quite to the show’s caliber). The sprites are well designed, and everything from Farmer Yumi’s barn to the town square looks lifted straight out of the show. Even the icon was a good decision from the devs, because it looks like an episode splash screen or maybe the cover of a junior reader book.

And yes, the game handles very well. With things as simple as they are, my kids were able to play solo and work their way through the game, and also invented a very clever co-op mode. One held the left JoyCon to walk, the other held the right JoyCon to jump and do the buttons. It’s not the best way to have two player mode, but i can’t discourage it because they did rank silver when they did it. Basically the execution is so straight forward that a four-year old could pick it up and understand it without needing to have someone do it for her.

This goes without saying, but I’ll say it anyways: Paw Patrol: On A Roll is not for adults, teenagers, or any kids who don’t abjectly love the show. It’s short, it’s simple, it’s silly and it’s far from a dramatic experience. But it’s very enjoyable for people who love the IP, and it does seriously lay the groundwork for better games in the future. Teaching my children what double jumps were means that larger platformers are now a possibility, and the accomplishment of doing a whole mission by themselves means they’re ready to try longer form levels for other games. What I’m saying is, geek parents who love gaming can see this as a viable gateway, so, as long as you can deal with Ryder’s incessant talking, there’s some real gaming mechanics under the surface. What good pups!

Paw Patrol: On a Roll! Review

Chase, Rocky, Everest, Rubble and all the other pups come together to solve problems on this surprisingly competent children’s platformer.