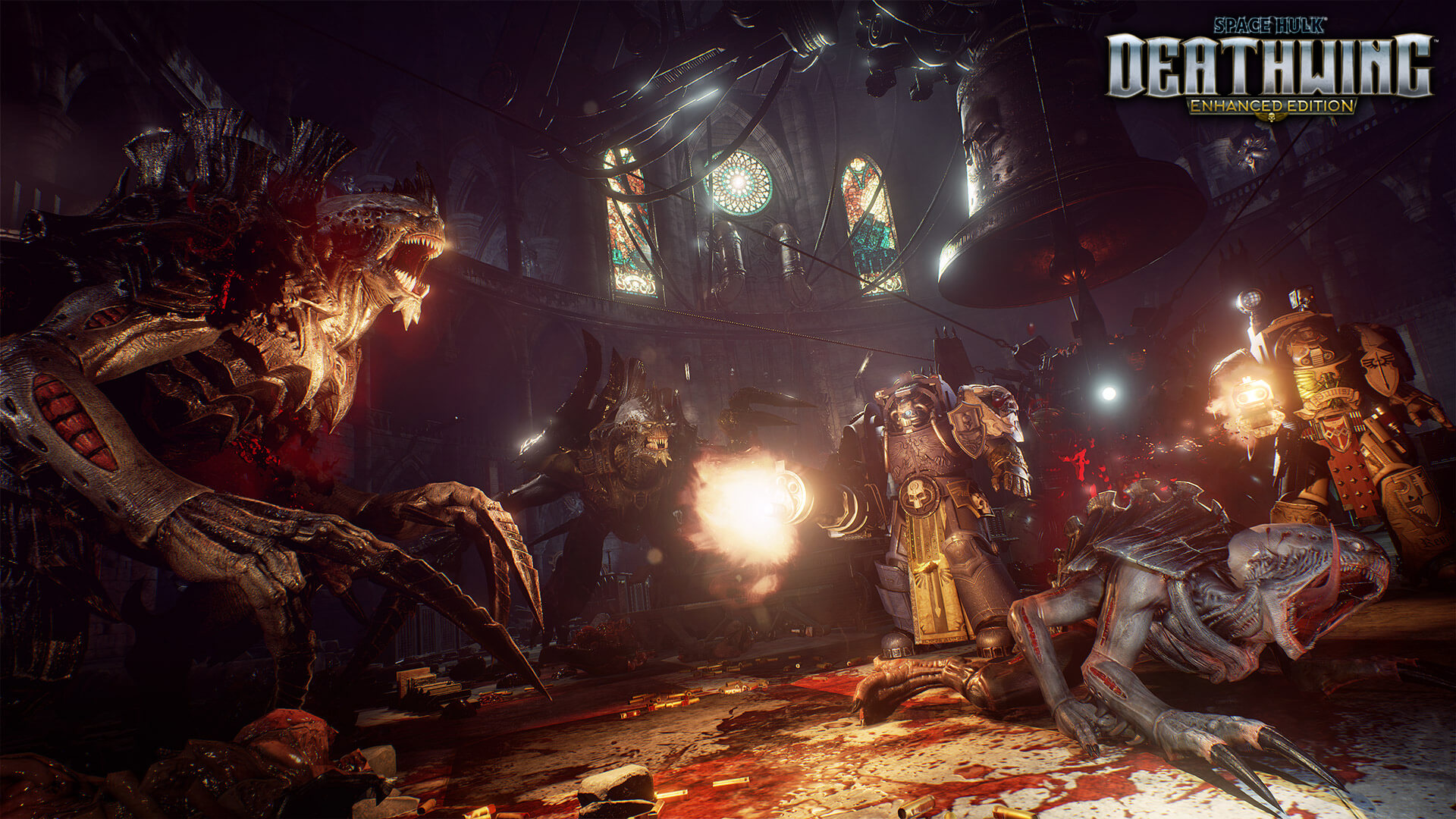 Space Hulk: Deathwing is a first person shooter (FPS) that first released December 14th 2016 with mixed reception. This enhanced edition, released nearly 6 months later, is supposed to address issues such as bugs and add in additional content that will be available to anyone who already owns the game for no additional cost. I’ll address the elephant in the room right away: did the enhanced edition do what it sets out to do?
Yes and no.
I didn’t play the original, but after reading around, the majority of complaints revolve around a general lack of polish and multiplayer issues. I’ll address both below.
I’m a very casual fan of the Warhammer universe and the slew of technical jargon proved to be unfriendly for those who aren’t veterans to the series. That being said, if you’re not a hardcore fan of the lore and universe, you’ll likely want to miss this one because Space Hulk: Deathwing Enhanced Edition is not a great FPS by any means. 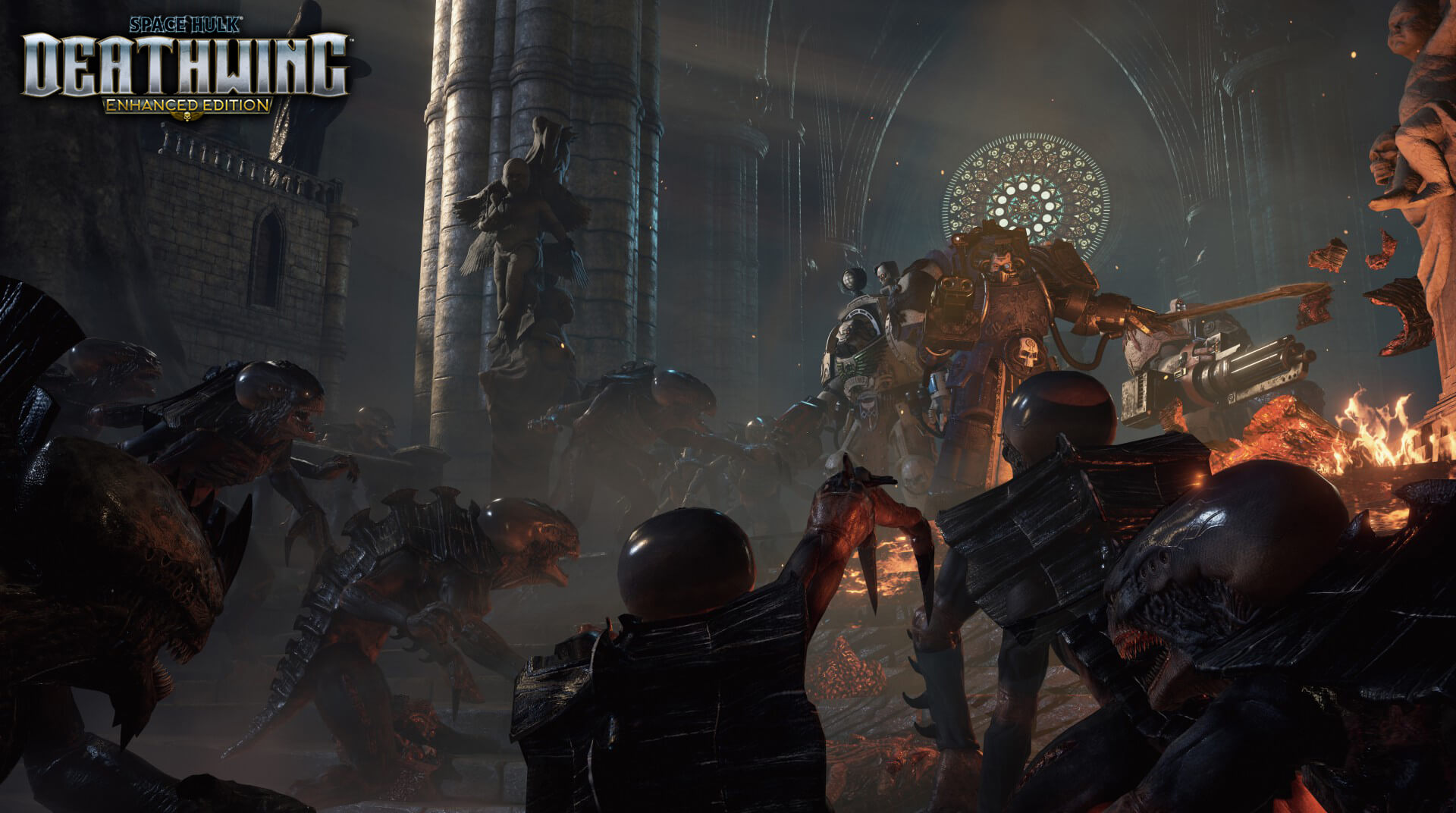 In the campaign, you play as the Librarian class, which has the power to use psychic abilities. You’re given two computer controlled allies that will shoot at any enemy creepy crawlies; they can also be commanded to stand at and guard a specified point as well as to heal you as long as they have med packs on them. I spent a large amount of my time in-game wading through a convoluted mess of corridors because the mini map isn’t quite large enough to be helpful. So I’d have to pause every so often to pull up the full map and orient myself based on shape of the passages because there’s also no compass. Much of the landscape looks exactly the same and, if you’re at all like me, getting lost is a very real issue.
Completing a chapter takes upwards of an hour, partially due to how long it takes to trudge from point A to point B. Sure, you’re strapped into a literal ton of armour, but that just makes movement a chore. Fortunately, frequent auto saves mean you can take a break and come back to it. This is not an easy game by design. You’re able to zip back to base via a portal hotkeyed to the touch pad, where you’ll be fully healed and your allies’ med packs are restocked. Game over results in restarting or reloading a recent save.
Combat has a poor sense of weight. Kicking down doors sounds like shooting a tin can with a BB gun and striking with your melee weapon is floaty. Reloading your gun can only done manually, which would be fine except  it can be done only when standing still. The game pits you against swarms of enemies and having to fall completely still for three seconds in order to reload opens you up to attacks. 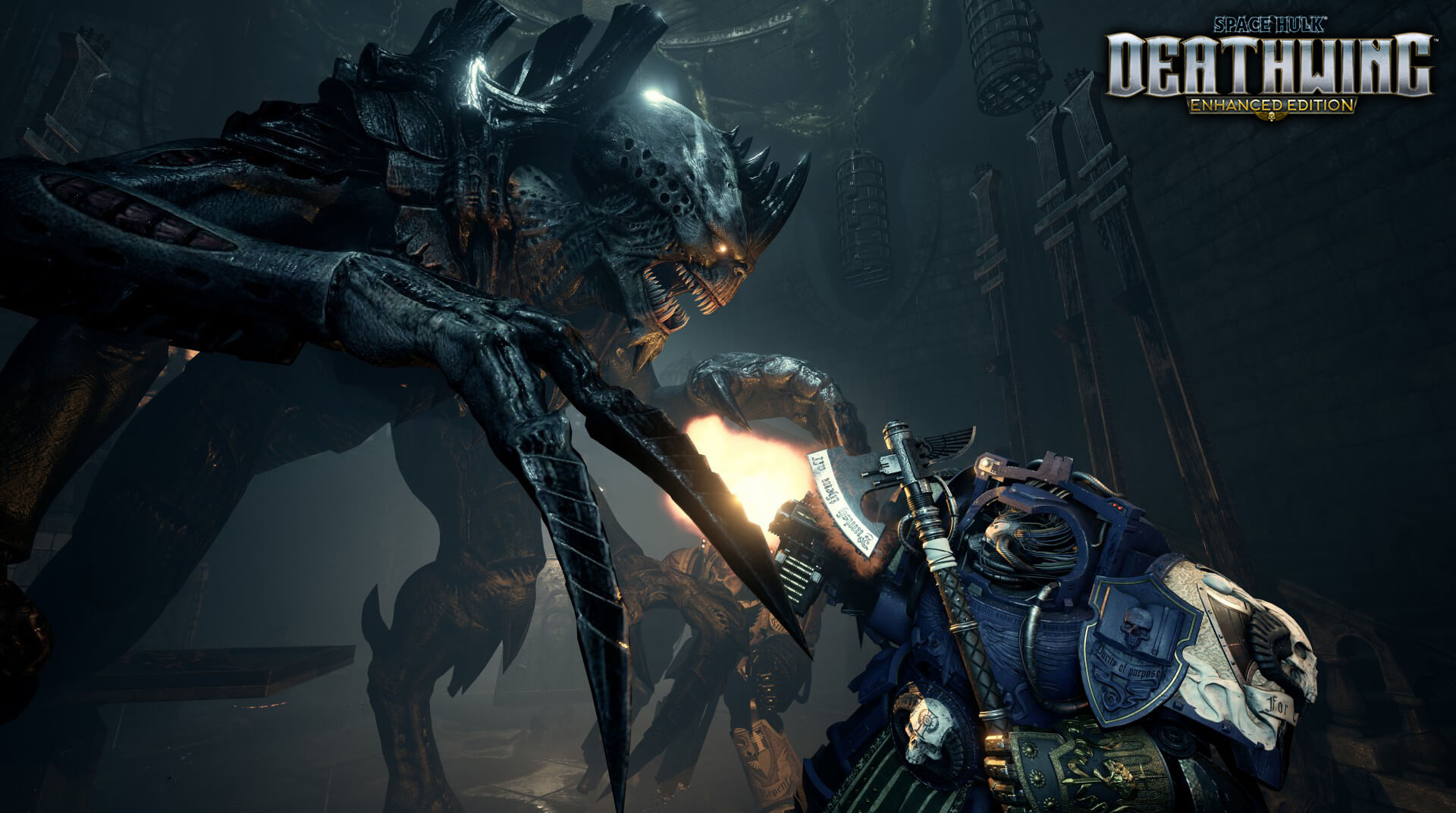 When you aren’t trudging along corridors and gunning down hideous genestealers, you’ll be seeking out collectables: major and minor relics. There’s a specific number per chapter and each has backstory tied to it.
In multiplayer, you’re able to select from six classes, each of which has it’s own loadout and play style. Unfortunately, co-op issues still exist. The dozen or so I tried to join resulted in a network error, though I did see others playing together so it does work at least for some. Class customization includes weapons and abilities, which can be learned by gaining experience.

Not great. Even if I was a fan of the universe and lore, I wouldn’t be happy with Space Hulk: Deathwing Enhanced Edition’s gameplay. It seems as though even after this attempt to improve things, the game still has a long way to go to become a polished final product.