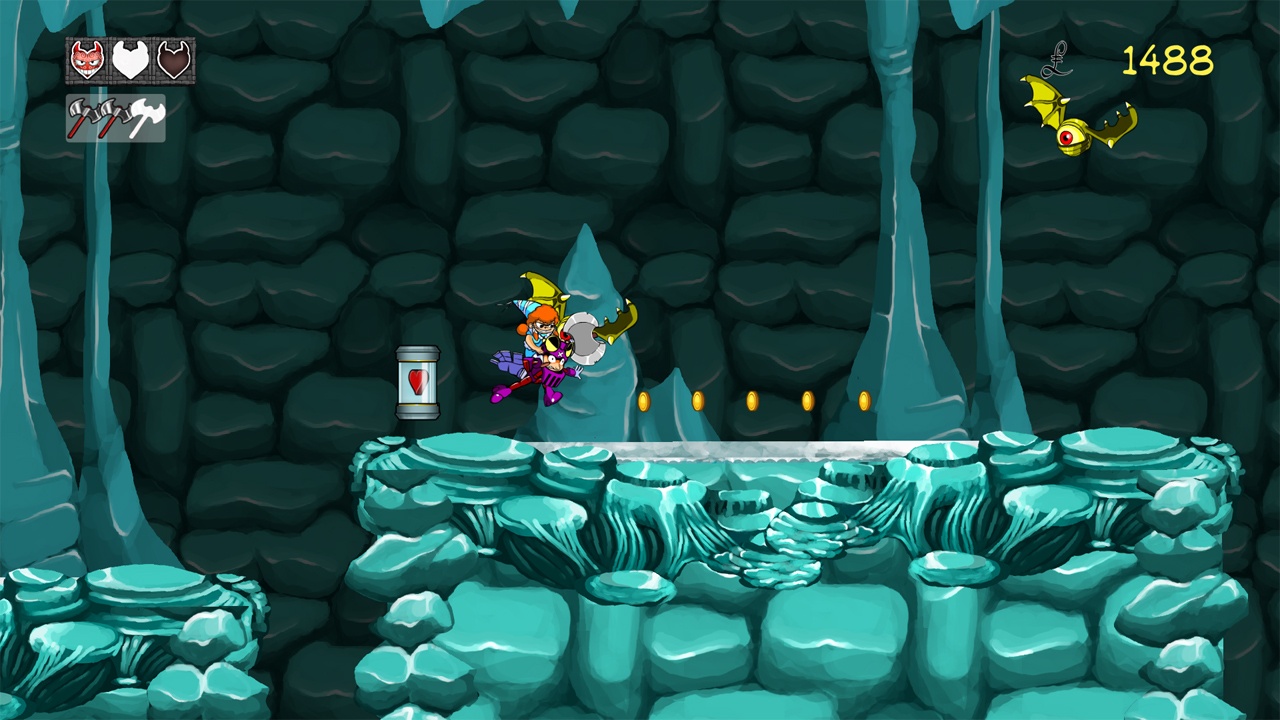 There’s always a great bit of enjoyment when you can do a proper role reversal, or any kind of thing where you spin a trope and flip it on its head. Movies where you root for the bad guy, games like Dungeon Keeper and Castle Doombad, it’s generally fun to put on the shoes of the villain and traipse around for a while. Nefarious, by definition and concept, should be one of those titles that can be added to the arsenal of “it’s good to be bad,” and there is so much that should elevate it to that status. However, as we are about to find out, the devil is in the details, and even the best meant concepts can go off the rails with poor execution.

Nefarious puts you as Crow, a long time villain who has been stuck in the classic loop: attempt to dominate the world, kidnap the princess, get stomped by the hero and flee to lick your wounds and think up another plan. Only thing is, turns out the hero is kind of a putz and decides to break up with Princess Mayapple on the terms that she’s spending too much time with Crow (being kidnapped and all that). Now, both parties are slightly incredulous at this turn of events, as Crow has dreamt of getting over this hurdle and Mayapple is dreaming of revenge almost instantly (villain in the making?). In any case, now Crow is free to go out to different worlds and kidnap OTHER princesses for his doomsday machine, and there’s finally nothing holding him back! Well, there is a matter of decorum from stealing other villains’ princesses, but surely there’s a loophole of understanding…right?

Nefarious is a bit of a genre bender, as it’s a good combination of action platformer with a sprinkle of RPG customization and some rare moments of total game change. For a majority of the game, your purpose is to run around the kingdom of choice, fighting through defenses and guards, traps and explosives, and eventually make your way to the princess in question for each world (the Bee Princess, the Dwarf Princess) and kidnap them. Shortly thereafter, you’ll have a chance to face off against their hero, who arrives anticipating kicking your butt, as good guys always do. However, this isn’t your granddaddy’s video game: you get to fill some homage-based roles as classic boss fights against the good guys, invoking the likes of Dr. Eggman and Kefka himself in some incredibly fun and funny slaughters. And don’t worry, folks: there’s even a quick dating sim for when you really just need that extra touch. I’m completely serious. 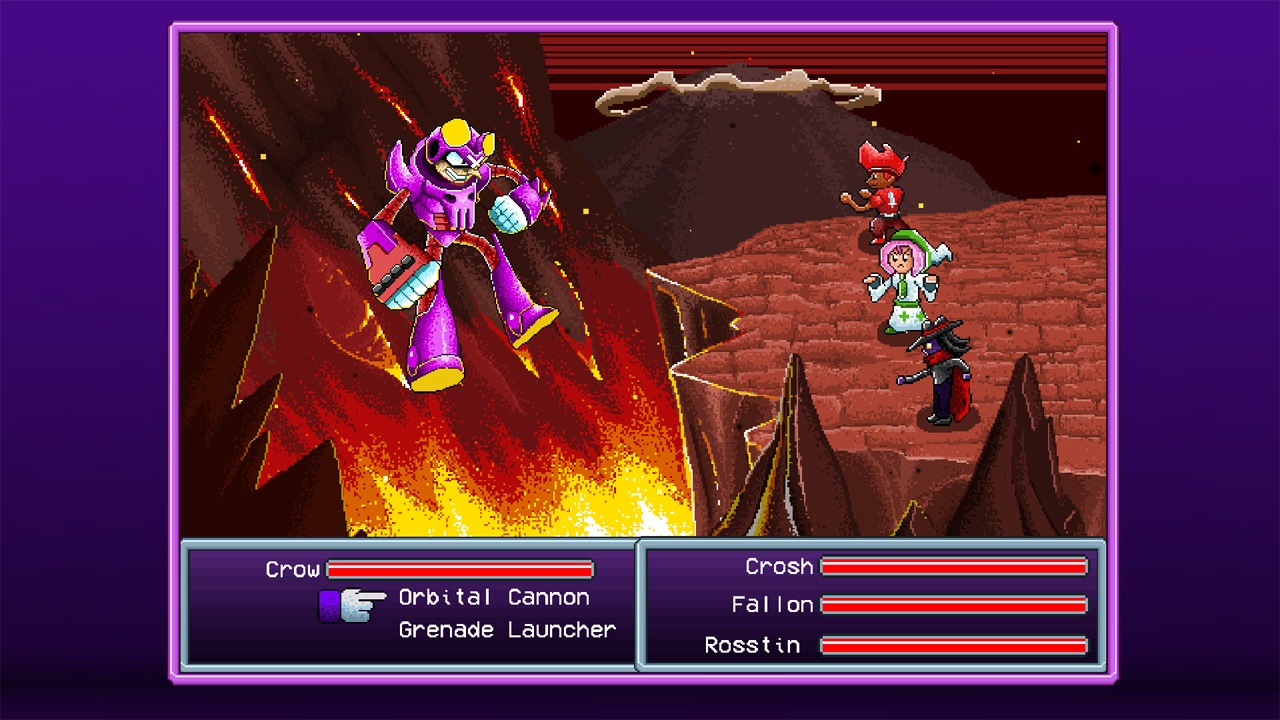 It should be noted that one of the things Nefarious does best, hands down, is storytelling. Not every line of dialogue is voiced, but there’s enough interjection from Crow, Mayapple, and every other vocal minor and major character to help give a better idea of tone and direction. I was slightly put off at first, as Crow reminded me a bit too much of Gru from Despicable Me, but it became very evident, very quickly, that he is cut from a different cloth. Crow has a singular ambition, a touch of nobility, but he is a villain, through and through, and will take what risks he can to achieve the victory he richly deserves. Interestingly, it’s everyone else who seems to be delightfully unbalanced on where they stand. The princesses all take different forms of umbrage with being kidnapped, but they also seem to nestle into their roles rather quickly. The “heroes” of the world flit from one note, bland Dudley Dorights to egotistical jerks who care more about flirting with your henchmen to a couple going wildly crazy with trying to prove you’re the villain by destroying tons of stuff in the name of “I’m a good guy!” One of my favorite things is that the princess of the Ogre’s turns out to be a bit too tough and almost evil herself for Crow to kidnap, so we make due and take the prince instead, because, hey, royalty is royalty. We actually get a great view into how the henchmen and the underlings in general enjoy working in Crow’s employment, and how Crow himself is changing throughout the game while still angling towards world domination (though there is a secret ending that players will WANT to unlock).

And the big parts of the game – the boss fights, the dating panel, the turn based combat – those all work and present wonderfully. Nefarious is already a good-looking game, with some well shaded, greatly proportioned characters and a rich, colorful tone throughout. The boss fights are the centerpiece, where you get a chance to not only see the game at its best, but to enjoy what is the larger selling point of the whole experience. Before the boss fights, you might as well be running around and jumping in any old platformer, but when you start swinging around a giant wrecking ball to hit a rabbit or trying to punch a Viking with your massive robot fists, then suddenly you’re in it, you really are the antagonist of the whole thing. There are several times where the shoe is on the other foot and you gotta survive the boss attacking YOU, but even these are fitting into the tone and the tropes of the game message overall. When you get a chance to do a boss rush towards the end of the game, it’s where things really shine and everything comes together.

However, it’s what occurs between these big spectacles that takes the wind out of Nefarious’ sails. The controls are standard: run, jump, punch, grenade. You can achieve a double jump by finding special explosive panels that add lift, and your game changes a bit once you kidnap a princess and have her in tow. The Bug Princess gives you a lofty jump thanks to her wings, or the ogre prince creates these cool grenades which has solid smoke lines, allowing you to make temporary walkways leading places. You collect coins in different denominations throughout the game, and, when you make it back to your evil airship between kidnappings, you can spend those coins on various upgrades, from different types of punches and explosives (changing to rockets is a godsend) to passive extras like more health or holding more explosives. If you accidentally die, a floating box of your dropped loot (some, not all) appears and gives you a chance to reclaim your lost cash a la Shovel Knight. In theory, this is all great and sounds like a ton of fun. 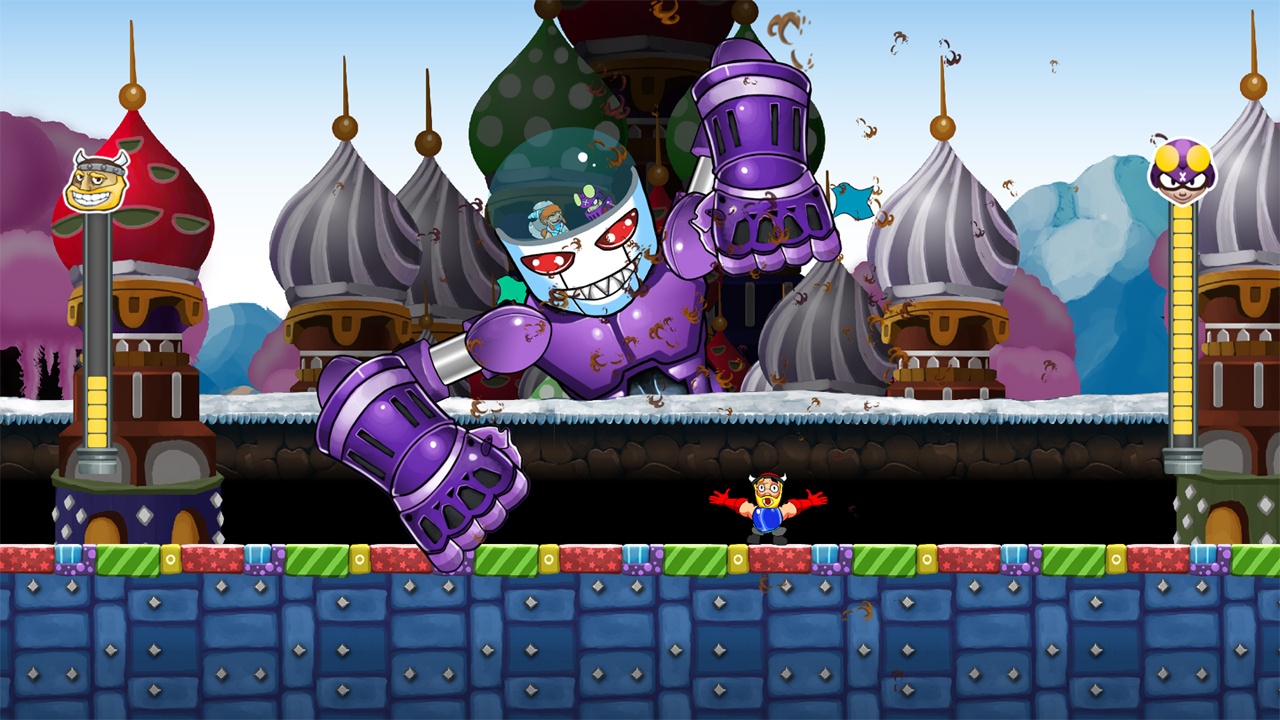 In reality, the controls just handle the whole thing terribly. Your punch has a janky range that also doesn’t always go off when you need it to, allowing enemies to run straight into you. There is so much variance in the anticipated arcs of grenades that throwing them is haphazard at best, self-inflammatory at worst, but at least you have a TON of ammunition that drops from enemies all the time. You’re supposed to aim with the right stick, but then you have to switch to attacking and jumping with the shoulder buttons, which seems to add to even worse latency and response from the game. You fluctuate from being in no danger to being in immediate death, as health drops appear frequently when you’re at less than two hearts BUT not fast enough when you’re swamped with critters. Admittedly, the game has a bit of a difficulty curve, so we can’t just pass the whole buck on “bad controls,” but there were a lot of times when I felt that Crow was sluggish and almost reluctant to move the way that I wanted him to. Maybe okay in a relaxed environment, but we’re trying to kidnap princesses here, I need him on his toes!

Lastly, I guess I’m just surprised at the load times of Nefarious. There’s enough of the game, sure, I didn’t feel cheated on things, but is has the same chugging and slow load as games that are hamstrung by other problems, like being Open World or being Roguelite. There’s nothing random or endless about Nefarious, all the levels are well constructed, finite and pretty systematic. So why does it take so damn long to get between scenes? I’m grateful that there isn’t more time needed to get from point A to point B, and I sincerely thought the game wasn’t going to load at all the first time I booted the sucker up. This might be the first time Starblade has put a title on the Switch, but not for Digerati, who should have figured out better optimization tricks by this point. It’s insane that this game clocks in at almost three times as large as the last title that I reviewed. There are so many games for the Switch nowadays, and it’s a fight for space, and you don’t want your game archived at the drop of a hat.

Nevertheless, Nefarious has so much potential and there is a lot, and I mean a lot, of fun that goes on here. The art style is appropriately wacky, the story and dialogue is straight up funny, and I deeply enjoyed the different worlds and the boss fights. There’s enough hidden swag to appropriately require some replay (crowns to represent completion, some hidden soundtrack cards to find) and, in the face of the game getting a control-based facelift, I would definitely come back around again. If you’ve got the patience and some good reflexes, you’ll have a ton of fun with Nefarious. However, if you’re already a little slow or poor with platformers, you might want to dodge this one and avoid unnecessary aggravation.

Only some wonky controls keep this dastardly tale from going from bad guy to super villain.