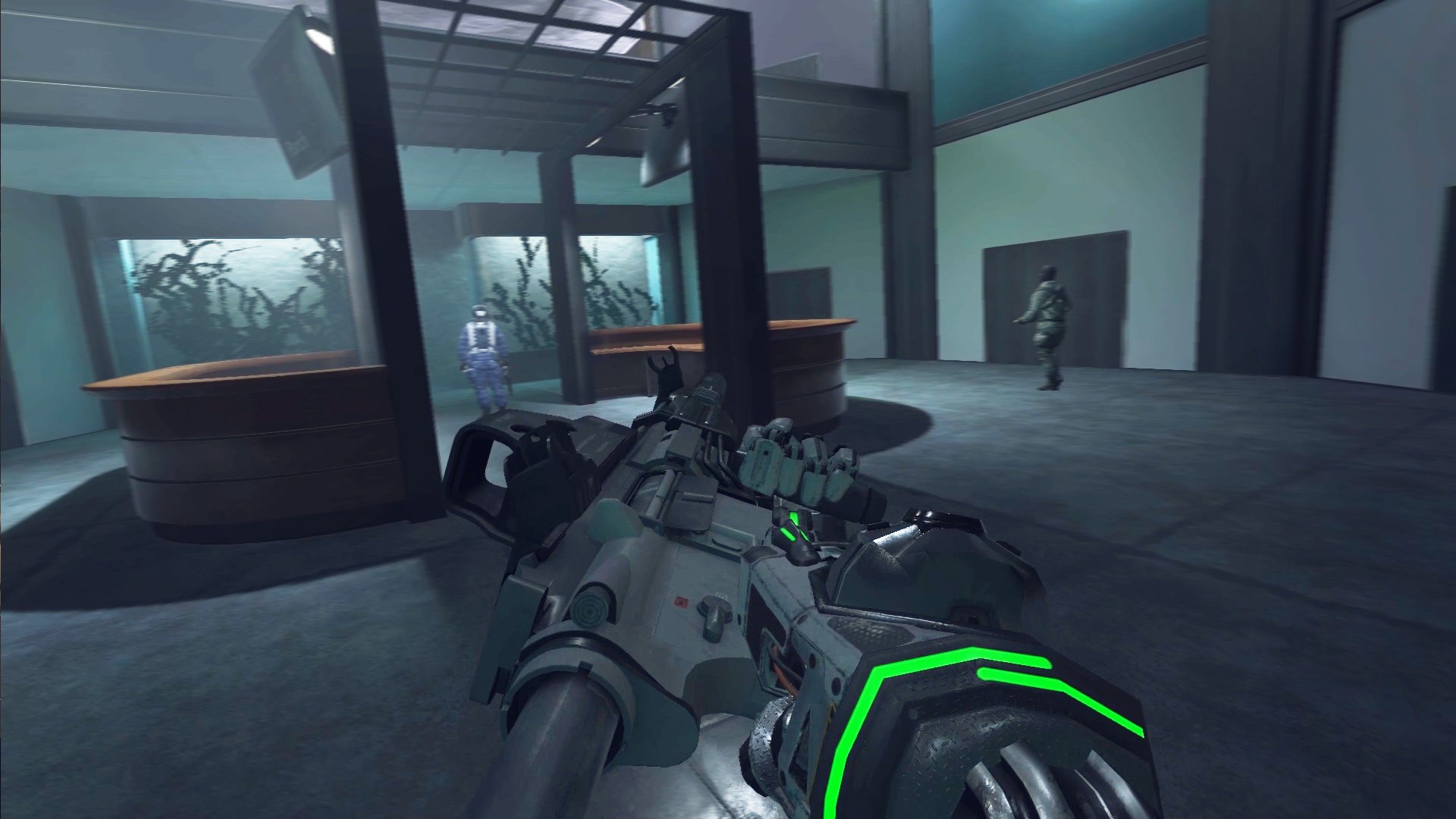 Ever since the halcyon days of Snake and the iconic Metal Gear Solid series, the stealth action genre has to be among my favourites. In fact, I’d venture as far as to say it’s my genre of choice followed very closely by RPG strategy. However, with the advent of VR titles on the PS4 and the Quest, we’ve been virtually starved of a worthy stealth title to date. That was until Melbourne-based Digital Load finally released Espire 1: VR Operative. Developed with the help of Tripwire Interactive, the studio which brought us Killing Floor and ManEater, Espire 1: VR Operative is a futuristic sci fi adventure in which you take charge of an android equipped with cutting edge, high tech gadgets and gizmos all aimed at transforming you into a stealth and infiltration genius. Imagine Sam Fisher as a machine and you’re half way there. 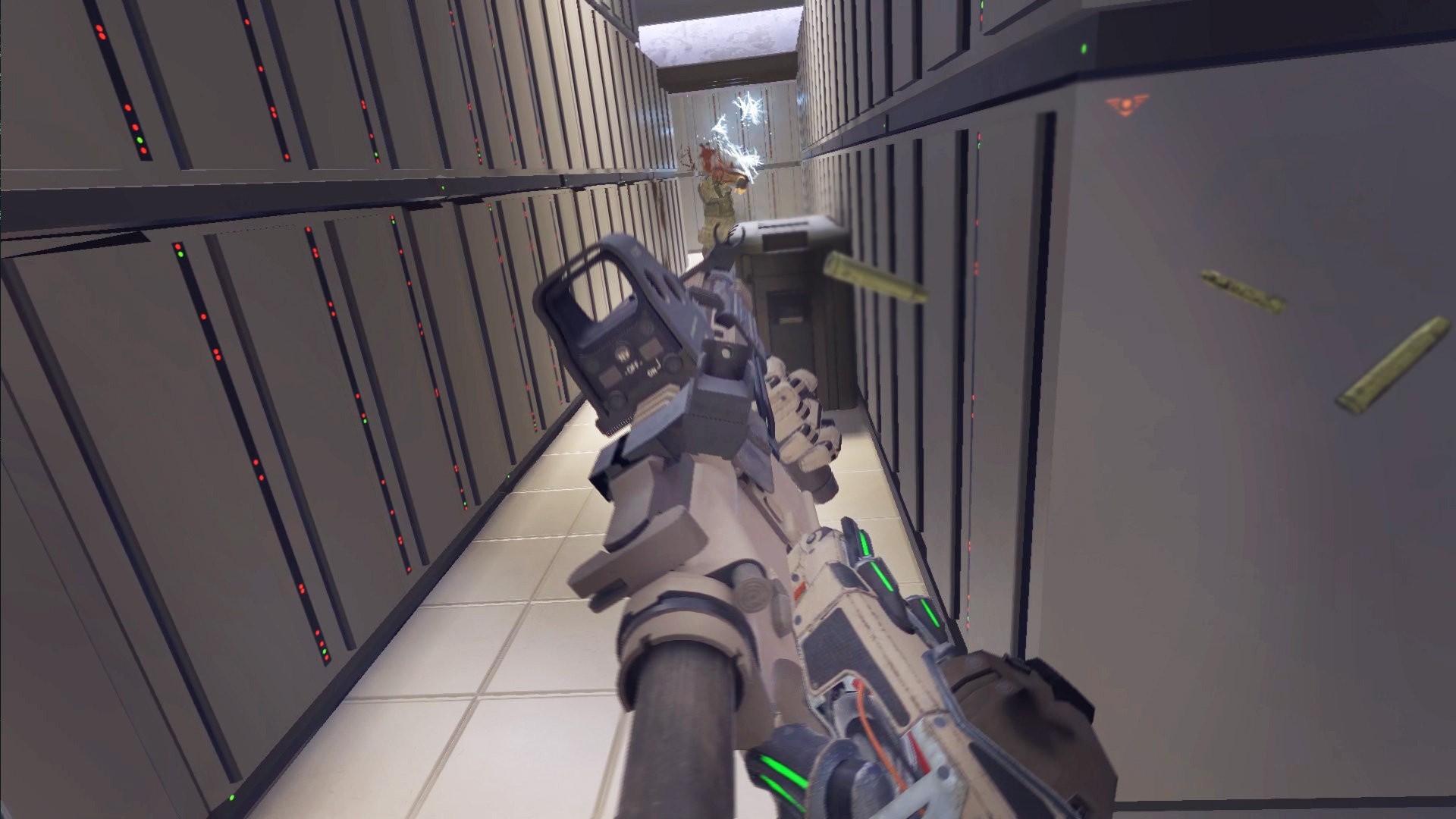 As you make your way through the levels, you unlock new more powerful suits with different abilities. Espire 1: VR Operative allows you to climb virtually any flat surface and, should you be discovered, the action goes into slo-mo which buys you enough time to hide or simply run away; like the enemies in the very early Metal Gear titles, the soldiers hunting you soon lose interest very quickly if you stay hidden long enough. In the likely event that you should take damage, Digital Load have provided the option to repair any damage by fixing glowing nodes. This may sound simple enough, but trying to repair yourself while still being fired on can take a lot of practice and patience. The stealth element of Espire 1: VR Operative is extremely well executed. Quite often you’ll find yourself holding your breath as you skulk in the shadows inches away from patrolling guards and as they turn their backs to you, you feel an incredible sense of satisfaction as you shoot them with a tranq dart. Trust me, that feeling never gets old.

Visually Espire 1: VR Operative is nothing short of a masterpiece. The characters and objects look so good that you’ll struggle to remind yourself that none of it is real. There are tons of objects that you can pick up, play with and throw around (or at someone). The in-game shadow effects really complement the feeling that you’re really a master spy using the darkness as his or her cover. This has also got to be one of the most comfortable VR games to play to date. Movement is a cinch with the option to snap or turn smoothly. Espire 1: VR Operative also includes a visor that hides the edges of your vision while you’re moving which reduces the all too familiar feeling of VR vertigo; which means that this is a game that anyone – even a VR newbie – can play. Excellent. 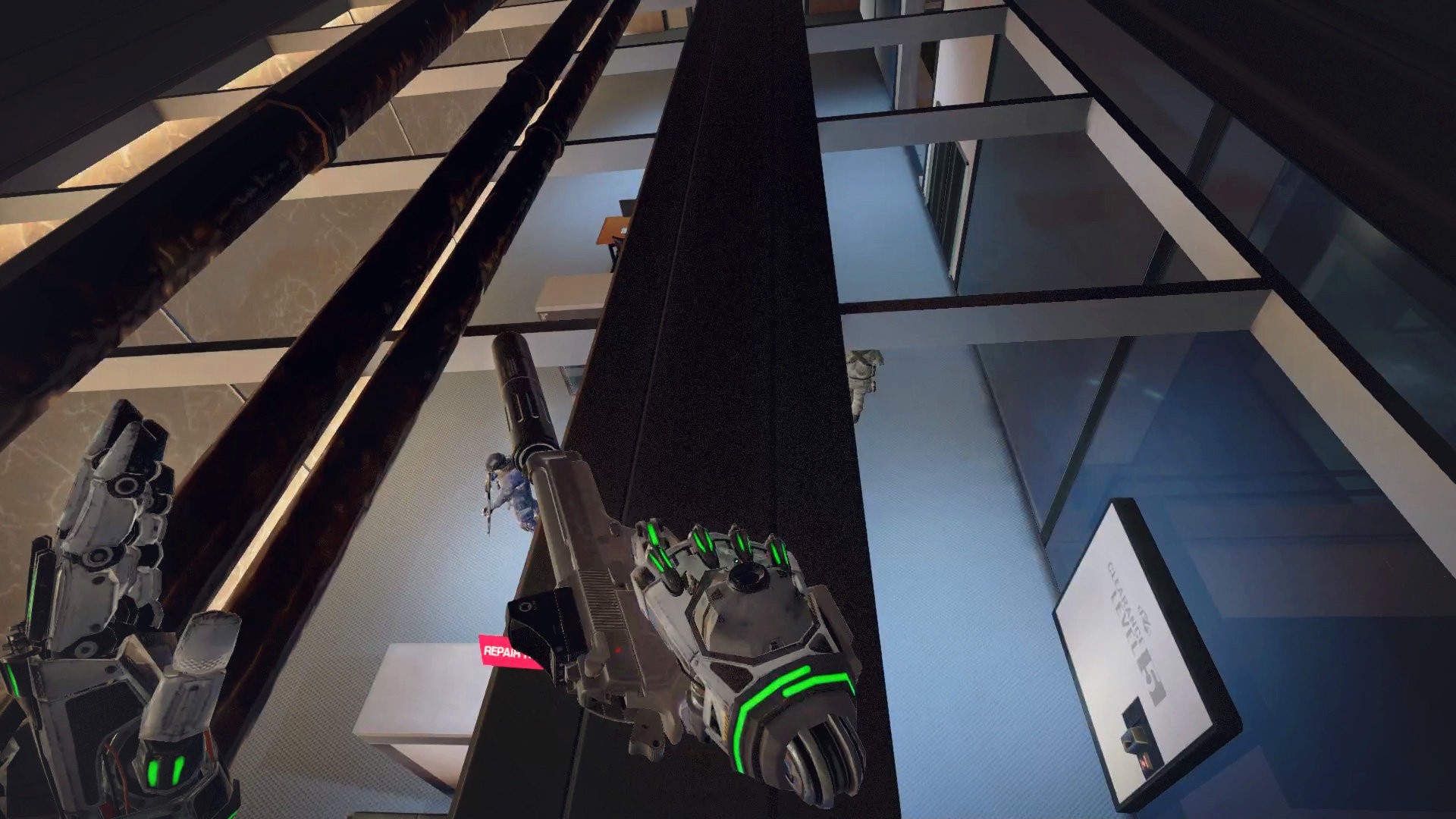 On the guns and gizmo side, Espire 1: VR Operative is virtually crammed with wonderful innovations which show off the developers versatile imagination.  My favourite has to be the wrist camera that you can use to see around corners and the spy cameras that you can attach to walls and furniture to keep an eye on the enemy.  I also gave a big thumbs up to the fact that you can use your voice to control certain aspects of the game and perform specific functions and don’t even get me started on the fact that I could play the game while sitting down – a fact which made Espire 1: VR Operative a much more comfortable –  if not lazy – spy adventure. If we had any quibbles with this game, its the fact that the story mode is relatively short. The meat and potatoes of the game can be completed in some ten to 12 hours, but there are also a number of special challenge maps aimed at testing how well you’ve mastered the art of climbing, stealth and combat. With the handy addition of a leaderboard, you’ll find it impossible to not return for just one more go so you can beat your own score and those of your mates. After a week playing through Espire 1: VR Operative, I’ve barely scratched the surface of this incredibly immersive and challenging game. This is undoubtedly the best stealth action VR game available to date and one worth your attention. Go buy.

Espire 1: VR Operative is undoubtedly the best stealth action VR game available to date and one worth your attention.