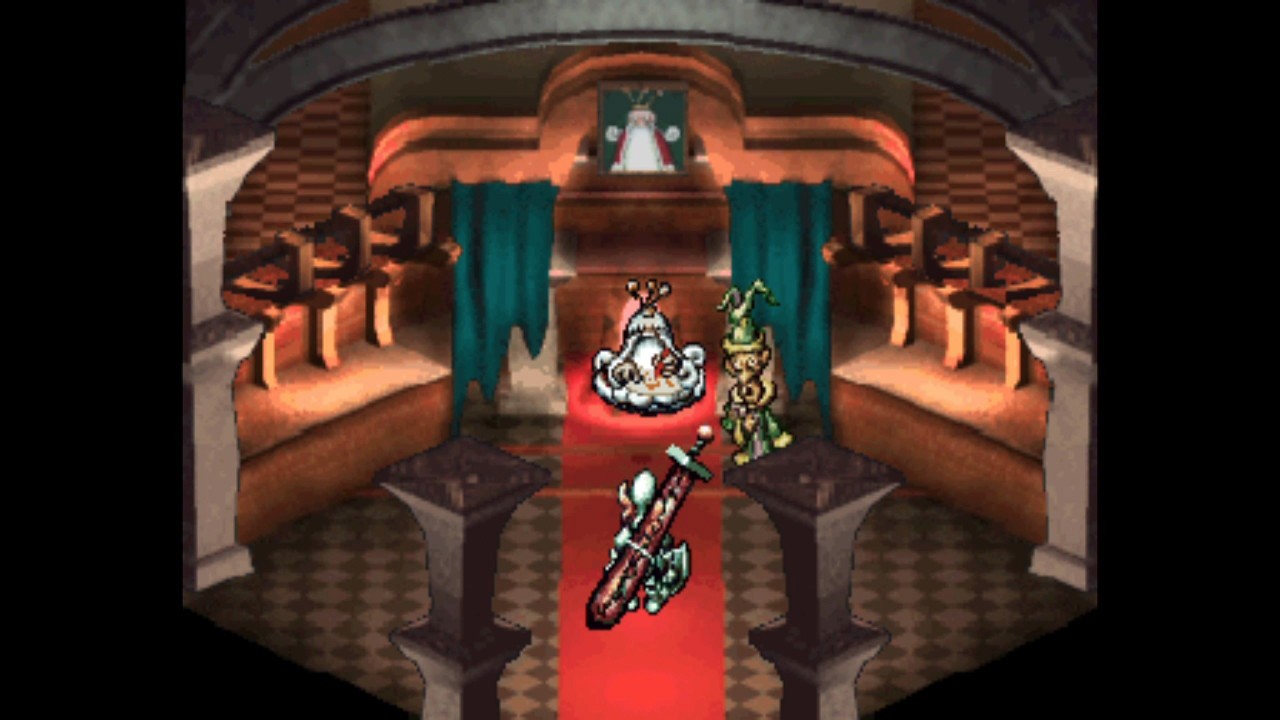 The more we move forward with video games as a medium, the more I appreciate what wild, amazing swings people and developers have made. Onion Games have shown this perchance for crafting a fantastic story and delivering it in the most offbeat way possible, from the harrowing tale of neglect and vengeance that was Black Bird to the quirky and possibly self-reflective take of Brave Yamada-Kun. Yet it stands to reason that these seasoned veterans, who all have many years in the industry, would also have some works that players had not heard of in the past. Indeed, before they were Onion Games, they were Love-de-Lic, and they created some of the most fascinating titles that the Playstation One had ever seen, if only seen in Japan. Now, after years and years of requests by fans and finally getting up the nerve to show some of their earliest works, Onion has moved forward and into the past, bringing one of the most intriguing and potentially influential RPGs that no one knows of to the West. Strap on your hats and be prepared to swim in graphics of twenty-five years ago, because we’re finally here, on the Moon.

Moon is one of those purposefully subversive games that never lets the player know what to expect and, indeed, doesn’t even seem to know what’s happening next. At the beginning, you see a young boy sneaking in some late night video gameplay (which is totally relatable) with a game called Fake Moon, which is a clear homage visually and stylistically to the Dragon Quest series. The boy is just about to fight the massive dragon boss and see the ending when mum makes him go to bed. However, the television doesn’t turn off, and the boy is magically whisked into the game world of Moon called Love-De-Gard, where the stakes are still the same…sort of. The boy is not the hero, but is mistaken for another character who apparently died some time ago. The boy has no corporeal form, and basically haunts a set of clothing to move about and even be recognized by the other denizens of the world. Moreover, it seems that the Hero is, well, kind of a jerk. He’s just running around killing everything in order to grind up EXP, and that’s sad, because the monsters did nothing to him, and now there’re corpses everywhere. The child (because maybe it’s a girl, I dunno) is visited in slumber by a figure who says the only way to really save the Moon is through Love. How do you get more Love? Why, by saving souls and connecting with townsfolk about what means the most to them! Oh, and stopping the Hero, if you can. Seriously, that guy is a pain in the ass.

Moon is, no joke, one of the most difficult games to understand from the very beginning, and I won’t sugarcoat that. It seems simple: to walk around and interact with things. However, you have an action meter in your status that tells you how much you can do at a time. At first, your action meter is crazy low, roughly three hearts, and the expenditure of action versus hearts isn’t totally clear. Talking and moving between rooms eats up some energy, but interacting with certain characters and monsters uses up even more energy, or maybe less. There’s not a definitive algorithm that I discovered, but I found out what happens when your Action is gone: you die. You faint and it’s game over. No chance to do otherwise. When you’re first getting your bearings, it’s discouraging, and downright frustrating. You can eat the cookies your grandma (not your grandma?) gives you to get back more Action, and you can buy additional food, but that costs money (called Yenom), and you don’t have any of that at first. So you need to make sure you never venture too far from bed, because sleeping is the only way to recharge your Action. Players need to remember that this game is quite old, and it comes from an era where games were still pretty unforgiving. 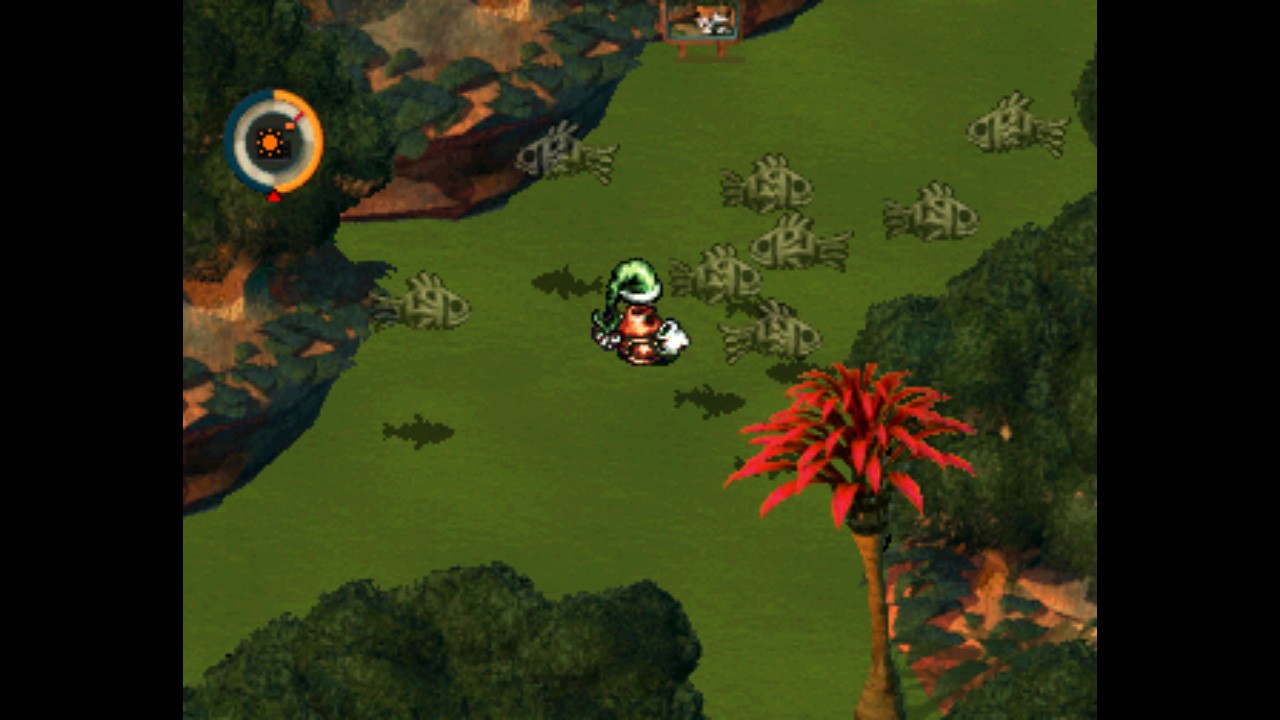 After you figure out Grandma’s home and sleeping to avoid game over, then you hit upon the meat of the gameplay: saving monsters. You get this dope book that tells you all about the dead monster bodies you find, and it gives you hints about their living routines and what you might be able to do to find them. Some, like the Shlyme, need to be snuck up upon to catch their soul, restore them to life and then have a UFO whisk them away to safety (because, sure, why not?) Others might only come out at night, might need to be coaxed out with items, or may only appear when they basically feel like it. There was one in particular that involved not only waiting at night, but being in the right spot at the right time for a cactus to sprout so I could ride it up and find it hiding up on the cliffside. Every time you capture a monster, you can go back and rest, wherein the Love you collected will be added to your character, levelling you up and giving you more Action points. As the monsters get more and more spread out, you have more and more Action, giving you versatility in how you plan to approach a situation. Oh, and there are gradually more beds, so you need not keep going all the way back to Grandma’s house before passing out. There’s nothing as stressful as watching your character start slow-staggering, indicating they’re down to their last heart, and you’re just a screen away from bed.

What I’ve just described to you is a majority of the gameplay of Moon, with several conversational interactions, some fetch quests and some truly bizarre puzzles (the Tests of Faith are the hardest things I’ve done in recent memory), but, like a chemical kitchen, it’s the how and not the what that make this revolutionary. Sure, it’s an anti-RPG, chock full of messages and meaning, taking the piss out of the archetype of grinding EXP and doing so in a bonafide clever and witty way (when the Hero dons his “legendary armour” I laughed aloud). Yet it’s how Onion Games told the story that makes it so wondrous. First, the visual landscape of it all is purposely surreal and whimsical. It has a claymation quality to it, intermingled with some early 3D graphics technology, giving me vibes of Neverhood meets Machinarium inside the polygon limits of the first Playstation. The characters balance themselves between looking sweet to somewhat grotesque, but never anything to induce fear. Rather, players are constantly in a state of voyeurism, like we’re peeking into the mind’s eye of someone with a unique lens to the world. It didn’t feel like the monsters or items or landscapes were good or bad, but just that they were. Like, this is the world of Love-de-Gard, just as it was meant to be seen. There’s comfort in that notion, and it propels you forward through strangeness and tenderness that belies all other expectations.

The soundscape of Moon is one of the most unique that I’ve ever seen, and I positively adore it. The characters and NPCs speak through set lines of gibberish that appear to be chopped, reversed and remixed lines of real dialogue in various languages. Nothing makes you feel stranger than reading what a character is saying, but being so sure you just heard a real world in French that has nothing to do with what’s being said. The music, as well, tends to be very minimalist with some rare exceptions, but that is to further allow the players to inflict their own personality upon the game. You can and will discover someone selling soundtrack MDs, allowing you to gradually craft your soundtrack to your own design. This is such a fantastic part of the game that it cannot be understated. Game music will take over when necessary, but if you want to make your own version of the game through tracks that I’ve heard nowhere else, it’s a blast. I spent DAYS selling Grandma’s cookies over and over (she bakes fresh ones every day) so I could afford to buy all the MDs I could want. Bubble Star is one of my favourite tracks for the general game feeling, but Yakisoba is my go to all day, every day. I need this soundtrack in my life. Onion Games, if you sell the Moon soundtrack as either DLC or on compact disc, I will buy it. If I need to, I will buy it on vinyl. It’s so beautifully eclectic, and it’s been remastered in stereo, giving this re-release a great sound bump that befits the Nintendo Switch. 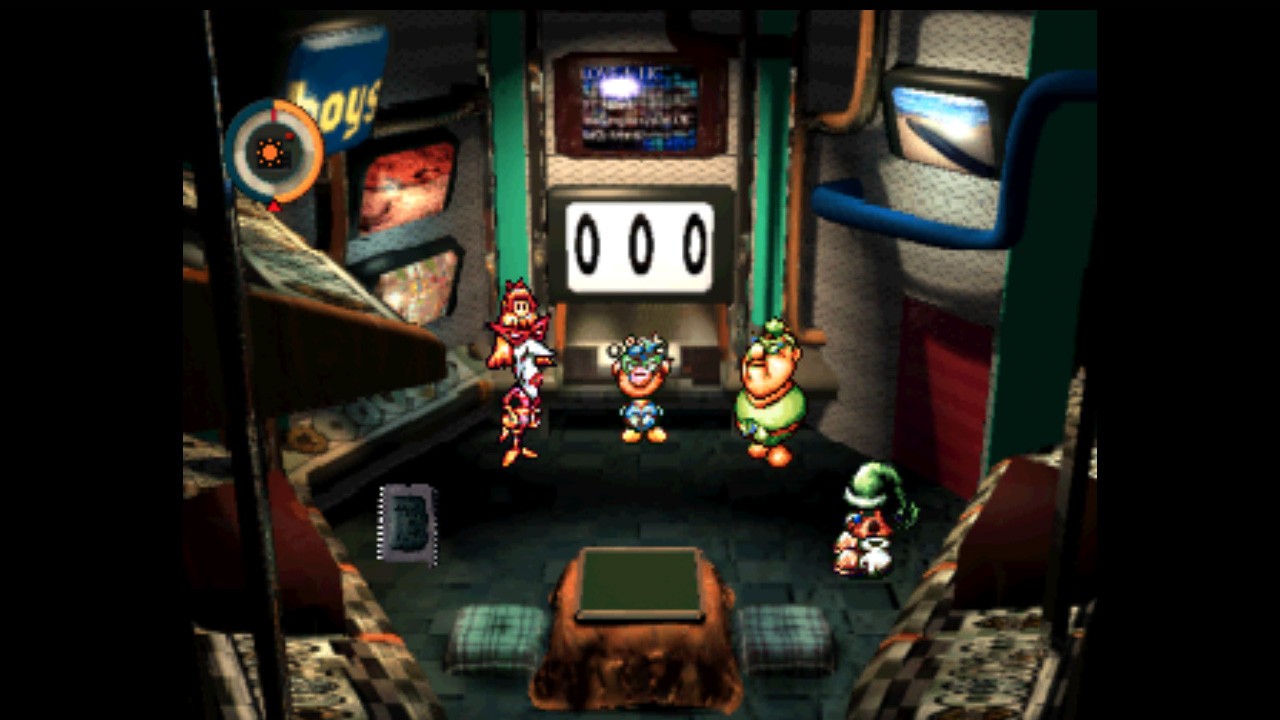 What makes Moon so incredibly compelling is that it’s beneath the surface for so many players. Toby Fox has specifically mentioned his influences from Moon on Undertale, and yet this game is virtually unknown in the West because of the timing and the region restrictions. That means we get to experience this game with truly fresh eyes, and it unfolds before you like a play or a movie. There are so many things to find, but you don’t NEED to find them all. You can, theoretically, make a direct line to the Hero without rescuing all the monsters he slew, but don’t you want to? You can sell cookies, buy bread, befriend fishermen, let an acolyte convince themselves they’re god, let dogs become friends, harass a topiary until you’re scolded, and then think about following the actual storyline. There’s so much here that conveys a greater story of love and community, but is told by watching plants spit you out across the map, or tricking a chair into thinking you’re about to sit on it. The whole thing should feel silly, but it’s so utterly sincere in the way it communicates its intentions that you can’t help but be genuinely focused on the task. It drags you in and keeps you there because, hell, it wants you to be there, and I wanted to be there too.</p?

Onion Games have always been one of my favourite Japanese studios and having them bring one of their most beloved titles in Japan to the world at large is a massive gift and an honour. Moon is something special, a game that cannot be easily explained or conveyed, nor imitated or pastiched. There is inspiration everywhere, there is innovation in every screen, and there is a sense of real, magical ideology that comes with every step. This is a game for everyone who wants to feel something new or different. This is a title that makes me question the way some games unfold, and appreciate those that take a different angle, a different perspective on storytelling. The fact that this title originally came about in the mid 90s is staggering. It’s like listening to The Cars and realizing that their album came out in the 70s and not much later. Moon was and is the future, and players everywhere should take a moment and see just how much Love there can be.

I didn’t know I needed Moon in my life until it arrived, and now I feel totally different.