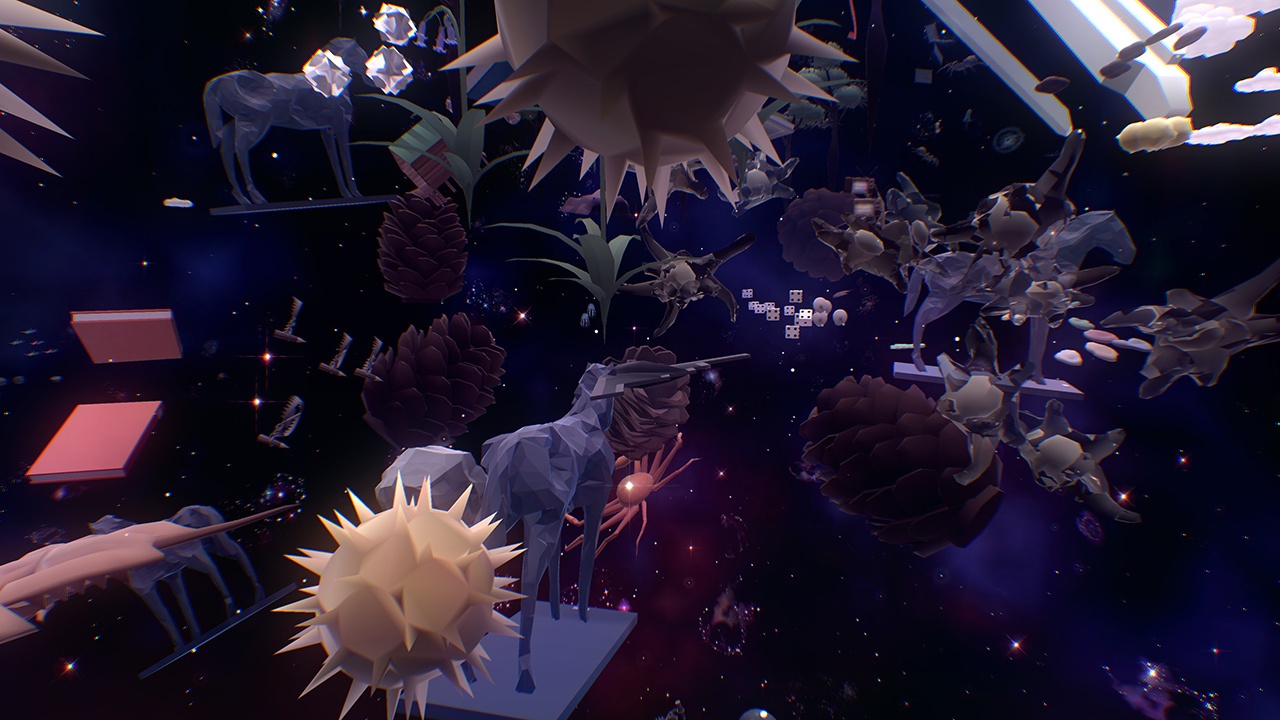 Sometimes you end up with a game that is purposely trying to not be a game. Often times, you end up with something that’s an artistic explosion, either spreading the message far and wide through creative design and execution, or damaging the reputation of the designer and “art” indies in general. It’s a difficult line to walk, especially as video games continue to challenge the same level of respect that music and film generate. As someone from the old school camp, I attempt, very hard, to take video games serious to a degree in which I can recognize art, even if I can’t appreciate it. Which is why I end up somewhere in the middle with David OReilly’s ambitious title, Everything.

Everything is supposed to be a visual and interactive vessel to better understand and explore the philosophical musings of the late Alan Watts, who’s voice is piped in at various intervals throughout the game. The plot and the gameplay are one and the same: get to know Everything. You start off the game as an animal (in my case, a polar bear) and begin to explore the landscape around you, seeing the different floral and fauna that surround your world. Thankfully, it’s not terribly factual, because polar bears and penguins rarely live together outside of zoos. You follow some markers and indicators to learn the controls, and then away you go, to interact and participate in the world of, well, everything. Think of this like if Pokemon was on a very grand, non-violent scale, in which you needed to see every single entry in this encyclopedia to better understand the world. The game aspect of the game finishes when you’ve successfully “discovered” every bit of life that the game created, from the hydrogen molecule to the spiral galaxy, all the way to the one dimensional lifeform, which naturally loops back upon itself, creating the infinite life cycle. Grand. 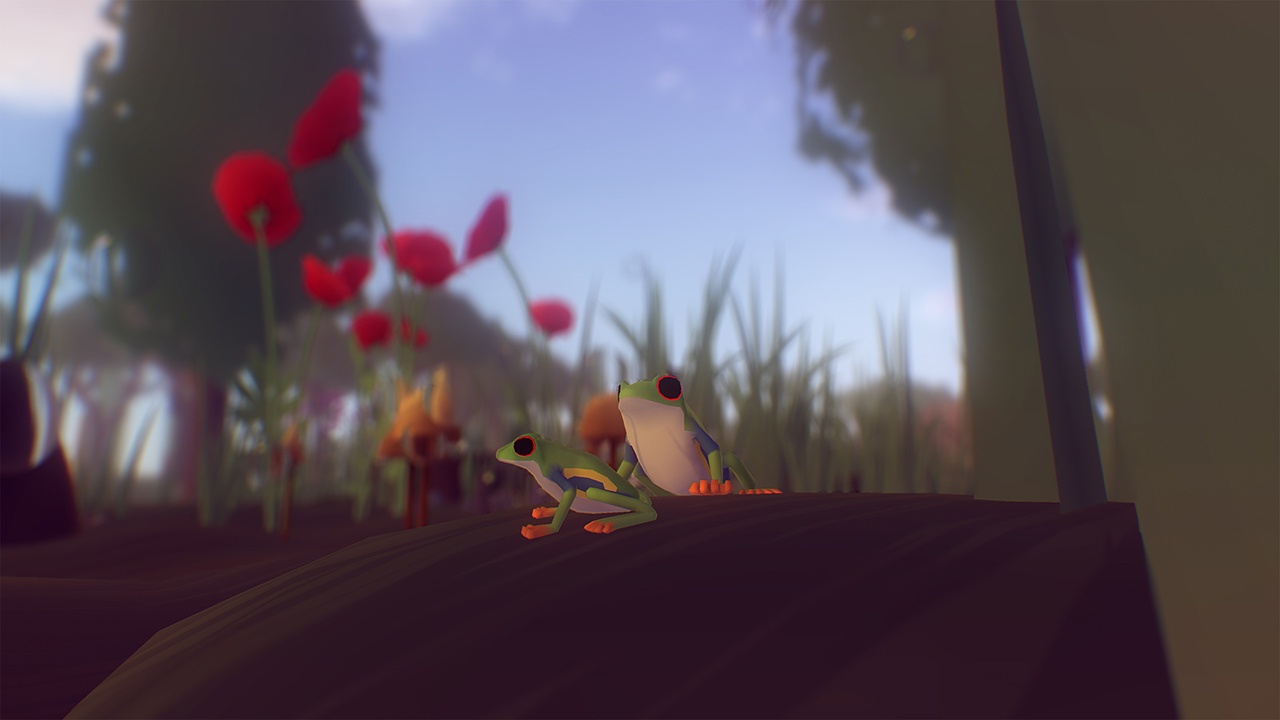 At this point, you might start to wonder about gameplay and how it exactly works, and the concept is actually pretty novel. You navigate around, moving as literally anything (animals walk, grass grows, rocks roll, etc.) to see more of the world from that creature’s perspective. Along the way you can “sing,” in which you unleash the natural sound you make and other creatures “sing” back in turn. You can band together with others of your species, dance together, maybe create babies, and then disband without a word, just leaving them behind. You ascend and descend in the life chain, either going up to a higher form or down to a lower form. This can sometimes create a bit of a pickle, because you’ll have to make a dramatic leap up to a pine tree in order to descend into a camel, and the whole thing is kind of loopy. When you become a neutron star, you might accidentally wander too far in the cosmos to find something to move to next, and so you gotta reset the landscape in order to re calibrate. It doesn’t lose any progress, but it’s oddly frustrating to play a game that is supposed to unite us all and then end up feeling alone.

Graphically, Everything is all over the place. You’ve probably seen by now the deliberately choppy, four frame animations that exist for animals moving, and it never gets any better. From moose to bears, these major animals just cartwheel in one direction or another in their quest to find mates and purpose. Penguins, oddly, hop in place in a slightly more convincing manner, but still read as a rough draft of animation rather than a finished product. Then you get to the smaller stuff, and things become even more confusing, because it’s animated WELL. Rocks and shells actually roll out pretty smoothly. The smooth, even rhythm of plants growing and wilting made a totally accurate idea of how I’d imagine grass to move. Hell, much later on, you get to inhabit an 8-ball on a pool table, and it’s so satisfying in comparison to the other things I’d seen to that point that I almost got angry. My guess is OReilly needed something to hook people into trying this title, and the wonky way that animals moved was hilarious without being too off putting. I’m not totally upset with the situation, but there are moments of clarity where you see what COULD be, and what there is instead, and it’s bonkers. 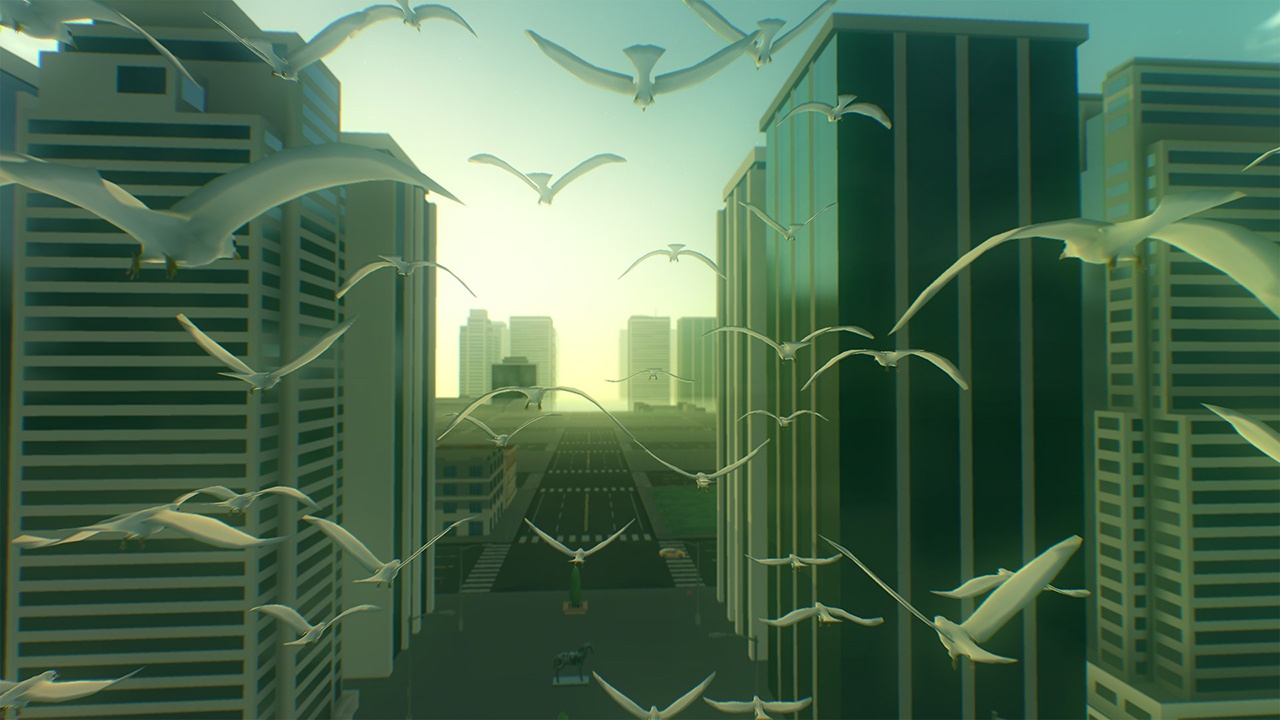 The main focus of the whole game is the input and learnings of Alan Watts, and this is going to be the most divisive part of the player’s experience. Alan Watts has some solid ideas, as he’s taking Eastern ideology and infused it with as much scientific connotations and modern philosophy as he can. What’s really odd, at least to me, is that a vast majority of what Alan has to say (and the interpretations that the game delivers with his narrative as a framework) feels like they can be sourced back to Shinto beliefs, yet I found nothing about Watts exploring that sect of religion. As you might derive from the title of the game and how to play it, the big takeaway from the lectures are the ideas of everything being connected, energy living forever, a lot of the weird but comforting stuff that came out of the 60s and 70s. Hell, if you’ve ever read or watched Slaughterhouse Five, you’ll find a bit of Watts floating about in there. If you’re a student of philosophy, or just an open minded sort of person in general, it’s an intriguing listen, but it can be overbearing at times. This is why the game options do allow you to change the frequency at which Watts speaks, or even turn it off. Turning it off, however, leaves things quiet and alone, kept company only by the nature noises and some very light ambiance, which I enjoyed at times.

This isn’t going to be a game that’ll generate massive audiences. As it stands, Everything has already been around for over a year, and the initial shock value has worn off. People may not have played Everything, but they might still be curious about the execution and the philosophy therein. There was a meme going around for a long time that stated “(game) would be perfect for the Switch!” I disagree with that in regards to Everything, simply because I don’t think Everything benefits from what the Switch brings. There’s nothing about it that screams “be portable.” In fact, a lot of the game’s grand scope and message felt lost and truncated when I played in handheld. The JoyCon control was good, but no better or worse than using a standard controller on my computer. This will work and sell to folk who understand the concept but want to try the game for the first time, and that’s more than alright. As long as newcomers understand that the “game” of Everything is relatively short, repetitive and dry, and the “message” is long, detailed and, well, dry. If you’re on board with both ends of the spectrum, fantastic, enjoy. As for me…this will certainly be the last time I ponder everything.

While truly massive in scope, Everything delivers in attempting to connect all life, but this title is more of an educational piece and less a game.