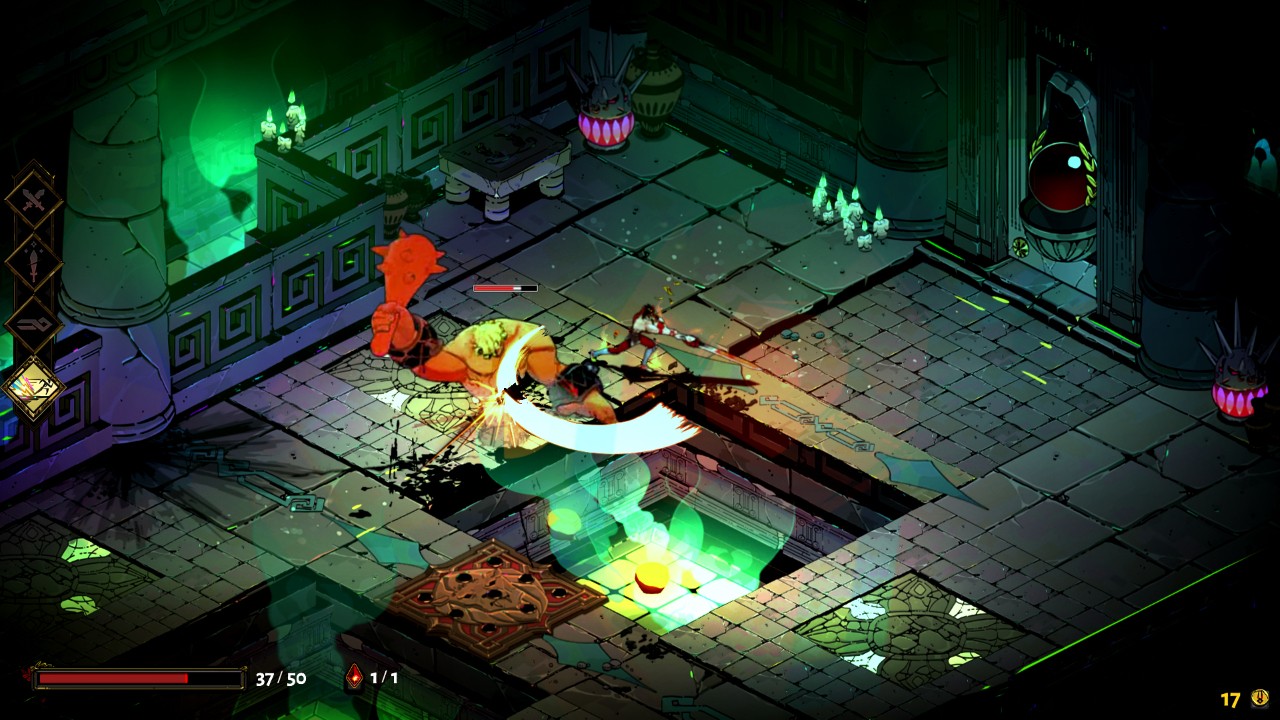 Have you ever read Maniac Magee? Jerry Spinelli, early 90s, told stories about racial inequality through the urban legend of an orphan? Well, in the book, there’s this moment when Maniac is about to untie this massive knot that’s like the town challenge. Before he does, he’s given this snack cake called a Krimpet for his energy, because he just found the end of the knot. Suddenly, dude lays down and takes a nap instead of starting on the knot. Maniac needs to clear his head with a power nap before he dives into it, and part of clearing his head is forgetting about the Krimpet, because, from the first bite, he knew he was hooked and would want to have more and fixate on this delicious treat.

This was me, three days ago, as I got ready for work. I had just downloaded Hades from the eShop after hearing a lot about it, and I opened it up, let it load, played through about five rooms and then put my Switch into sleep mode. I left my Switch at home that day instead of daring to bring it to work. On that first day of downloading the newest title from Supergiant Games,  I knew that my Switch needed to stay far, far away from my workplace so I could give my full attention to the tasks at hand. I’ve loved Supergiant’s titles in the past, for their storytelling and visual effects and fantastic soundscape, but there had never been anything like this. A roguelite dungeon crawler with slightly isometric views, a ton of power-ups, and a real sense of progression when positive achievement and deciphering the game. This was a temptation of the highest order, and it needed to stay put until I could put some serious time into it. When I did, it was one of the best damn roguelites I’ve played.

First off, the story. While certainly original, Hades is mired in the very well trodden area of Greek mythology, and pulls from a very well established cast of characters. The player is in the role of Zagreus, son of Hades, and one of the lords of the Underworld. While Zagreus doesn’t have much of a large role in the more popular mythological tales, here he has a very relatable mission: he wants to move the hell out of his dad’s house. Zagreus wants to leave the underworld, and Hades wants him to stay put. In this version of the tale, Hades is a large, muscular jerk who is super passive aggressive (and aggressive aggressive) who tells Zagreus he can leave the Underworld if he fights his way to the surface. Turns out there are tons of demons, forgotten souls and malicious entities between the inner sanctum of Hades and the surface world, plus major characters (like the Furies) who are specifically trying to help out Hades (or at least not get on his bad side). The rest of the Olympian Parthenon, however, doesn’t like Hades acting like a dick to his kid, so they are not-so-secretly trying to help him out with blessings and advice. It’s a long road to freedom, but Zagreus has one thing on his side: death doesn’t really mean a lot. 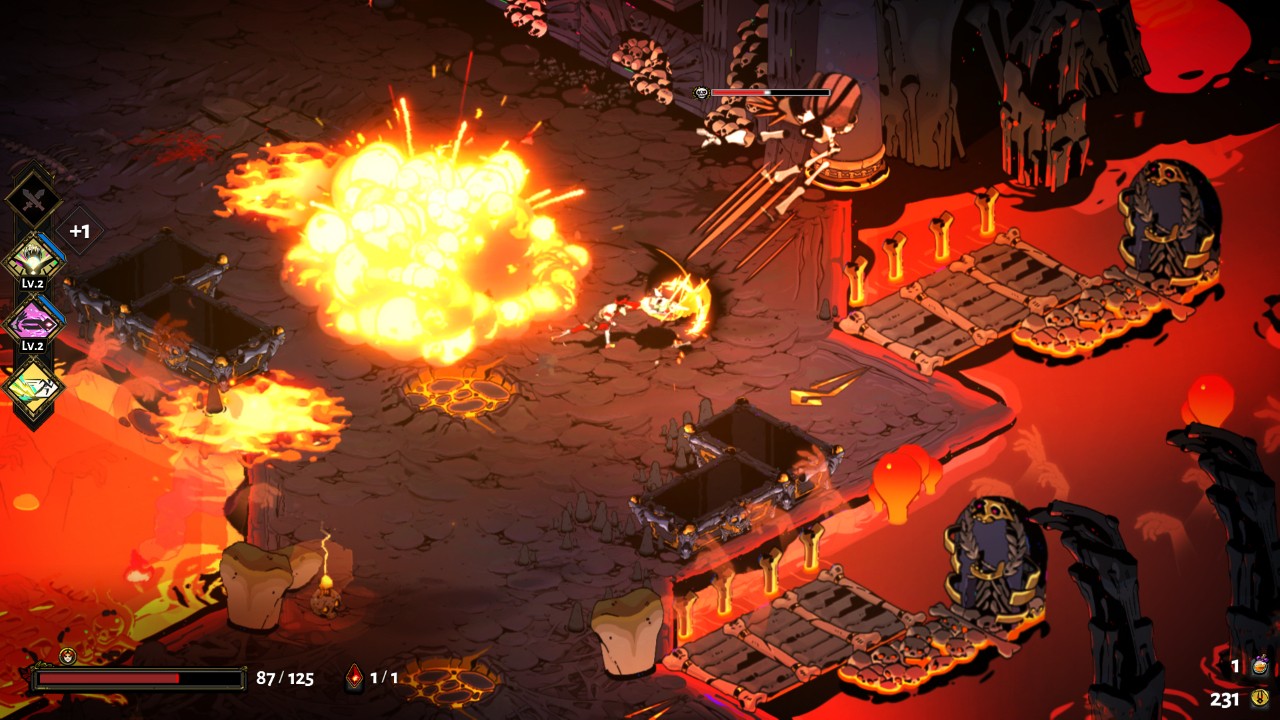 Hades plays as a serious roguelite brawler with a ton of customization, expansion and, most importantly, a sharp and focused learning curve. You get dropped into the game with very little preamble, equipped with the first of many weapons that Zagreus has at his disposal and are tasked with simply moving forward until you end up getting killed. You have four basic attacks to work with that you need to ferret out for yourself, for each change drastically depending on a number of factions. Your primary attack is great for most button mashing approaches, but this won’t fare well if you wield the infernal bow and arrow that Zagreus can choose. The special attack ranges from a spear throw to an uppercut depending on the tool at hand, and the Cast, which is a special, limited ranged attack, is usually the same deal until the Gods get involved. There’s also the matter of a dash, which can become offensive with the right power ups, and you can, with a bit of luck, even call directly upon a God to assist you in battle, though this is a rare and special opportunity that doesn’t always appear in a run. Zagreus will sometimes have a choice between where he will head next in terms of rooms, with a glimpse at the reward you’ll be given if you’re successful.

You could probably read eighteen pages about everything that goes into the upgrade system of Hades (and I’m sure the wiki editors are in overdrive right now as the game is still relatively new), so I’ll try and boil it all down for you. The Gods will each reach out to you, completely random and sometimes not at all, to offer blessings that can enhance some part of your life for the duration of your run. These go anywhere from buffing damage to adding crucial status affects to your attack (Doom is clearly the best damn one), and, on occasion, will offer to come down and be a temporary corner person if you play your cards right. Naturally, the Gods are fickle, and you can easily do something to offend them. One of my favourite room risks is getting two God boon offers, and needing to choose one while, then dealing with the offended God who wasn’t chosen. There’s nothing like trying to deal with several massive enemies at once while Poseidon is actively throwing tidal waves at you from every angle.

Besides the temporary boosts that you receive in the runs, Hades also allows for overall progressional improvements in multiple areas. You can collect a sort of dark energy that will power-up Zagreus overall, adding to his Cast numbers, health, backstab damage and other fields. You can commission expansions both in the sanctum of Hades and across the lands of Tartarus, Asphodel and beyond to aid in your quest. You can occasionally find Nectar hidden throughout, which makes an excellent gift to the denizens of Hell and can build a relationship that may lead to unlocking essential equipment to aid in your journey. And, of course, there are keys that will unlock new weapons, new upgrades and hordes of other things. The fact of the matter is, I’ve been playing Hades every single day for several days now, hours at a time, and I haven’t found everything (not according to the scroll of Fates that I unlocked, anyways).

Hades stands out and shines more brightly than most roguelites for several reasons, and people should sit up and pay attention. First and foremost, it has that Supergiant brand of presentation upon it. The game looks fabulous, with amazing detail going into the procedurally generated room production and the different entities you encounter. From the simple disembodied skulls to the nefarious Wavers all the way to the different Furies and Hades himself, the game is positively stewing in artistic wonderment, and Zagreus stands proud in the centre of it all. His attacks and movements change as the game changes, and his presentation changes to reflect this. That is to say, there’s a great chance that the Zagreus who begins a run will look, at least in combat, completely different by the time you finally reach the wall that stops you. 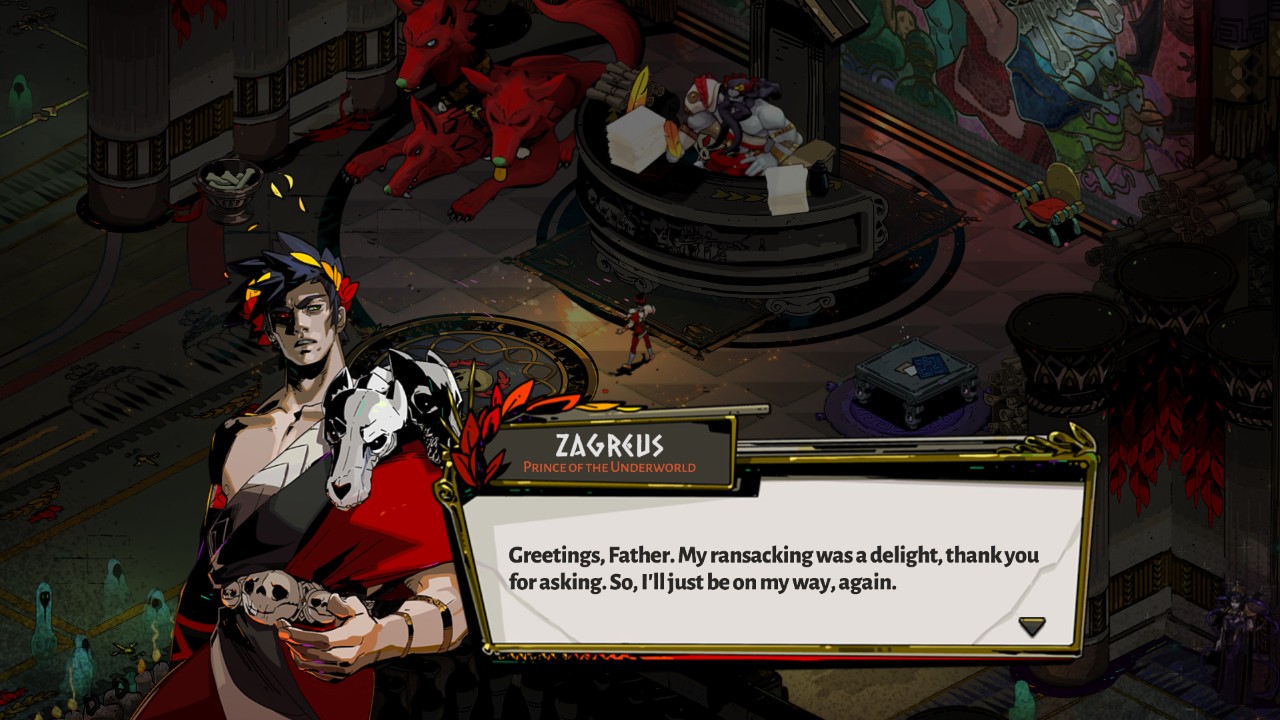 The presentation goes deeper than visual aesthetics, however. There was a lot of thought and care put in to make this more than a simple meat grinder that pulled players in and spit them out. The characters are all voiced, from the narrator who accidentally reveals a major reason for Zagreus’ exodus to the flustered Gorgon head who adorably occupies space inside Hades’ chambers. There’s actually a story here, and the story is filled out with a heavenly and infernal cast who all have different stakes and ideas in the game. There’s a serious level of concern for Zagreus that is presented in multiple ways, and you learn more about the importance of his struggle and the love/hate relationship he’s developed with his father. Very rarely will a game dedicated to making you die so many times, then fills you in on what’s going on, and Hades stands proud with a tale rooted in popular mythology that has enough independent variation to make Rick Riordan proud.

Most importantly, however, is the real feeling of success and progression that comes with the game. It’s not enough to simply get more powerful and then rush blindly into the fray, thinking that brawl will win the day. Hades purposely let the enemies and the player hash it out, allowing you to figure out attack patterns and signs, devising the best way to utilize the proper technique for each and every weapon (as there is a MAJOR incentive for clearing the different areas with different weapons). When I first ran into Megaera, my death came swiftly, painfully, and with a bit of embarrassed frustration as I respawned back at “home.” By the third time I had met her, I saw flaws in her attack patterns, noticed tells and knew what was best and when to use it. Now, on each subsequent run, Megaera became little more than a signpost to let me know how far I’d played, and how far left to go. I don’t take her lightly, but I know how to take her, and can often do so with minimal (if any) damage. Without creating too many puns, Hades reminds me of a roguelite version of Furi: you learn, you adapt, you become stronger and better, and now the way forward is clear.

I’ve put so many hours in and yet I feel like I’ve barely scratched the surface. There’s so much more to this game, and it’s honestly got one of the best showcased atmospheres I’ve seen in so long. The game plays fantastically on big or small screen, with just the literal initial load taking a moment and then the game diving right in, having almost no cool down between rooms. Sometimes you’ll find respite and relax with a fountain. Sometimes Hades will force you to survive 45 seconds with an onslaught of monsters. Sometimes you find out the hard way that you can stand in the lava but it’s not actually good for you. And sometimes you just love every second of hurling your shield like Captain America and inflicting Doom on five enemies at once, watching death catch them unawares while you flex your demigod muscles. Roguelite lovers shouldn’t even hesitate, and probably already own this. For those of you who don’t often dive into roguelites, this is your chance. It’s got story and heart, it’s got the draw and appeal that Bastion does with the challenge and the mentality of Dead Cells meets Dark Souls. Reject your fate, fulfil the prophecy and be who you are. Escape Hades.

Clever, challenging, exciting and frustrating, Hades ticks all the boxes of a game that’s sure to become the next great “one more room” sort of addiction.