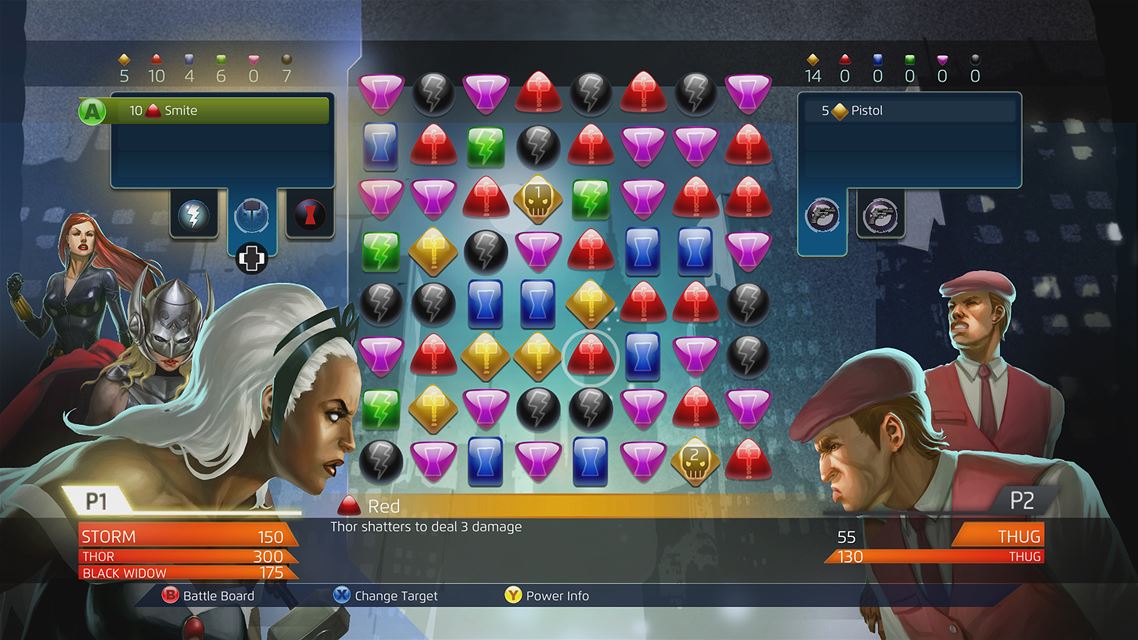 Cut from the same cloth as Bejeweled, the Puzzle Quest series has made a name for itself for combining addictive puzzling gameplay with the role-playing tactical action. The original game was released on PSP and Nintendo DS back in 2007, but has since been ported onto a variety of home consoles and handhelds over the last few years. Given the relatively basic format the series has to offer; it comes as no surprise that it was quickly adapted to suit the growing popularity of the Marvel universe.

Marvel Puzzle Quest was first released as a free-to-play game on iOS, Android and Steam in 2013, with new additional storylines, characters and events being added, for a price, as the base of players grew and the game rose in popularity. This model was dropped while the game ported in high-definition to PlayStation 3, PlayStation 4 and Xbox 360 in 2015, and as the game lands on Xbox One, we finally have what can be considered as being a complete game package for all of those true believers out there.

The game loosely follows the Dark Reign storyline from the comics, a yearlong event that effected the entire Marvel universe. When the power-enhancing substance known as Iso-8 suddenly starts to appear in abundance across the planet, former Green Goblin Norman Osbourne stages a coup against S.H.I.E.L.D. and while sending some of the most notorious villains at his disposal in an international crime spree. Nick Fury leads the counter-attack which sees the Avengers, the X-Men, Spider-Man and many more of Earth’s mightiest heroes uniting to put an end to Osbourne and his Dark Avengers.

The basic premise of Puzzle Quest revolves around a game board composed of random coloured jewels that must swapped around in order to make a row of three or more, clearing the way for more jewels to come tumbling down and setting up new possibilities along the way. The twist here is that each jewel corresponds to a number of hit points that will deal damage to the enemy player. A combination of luck and strategy comes into play as you and your opponent battle it out to defeat one another, relying on longer strings of jewels, combos and special moves in order to get the advantage. 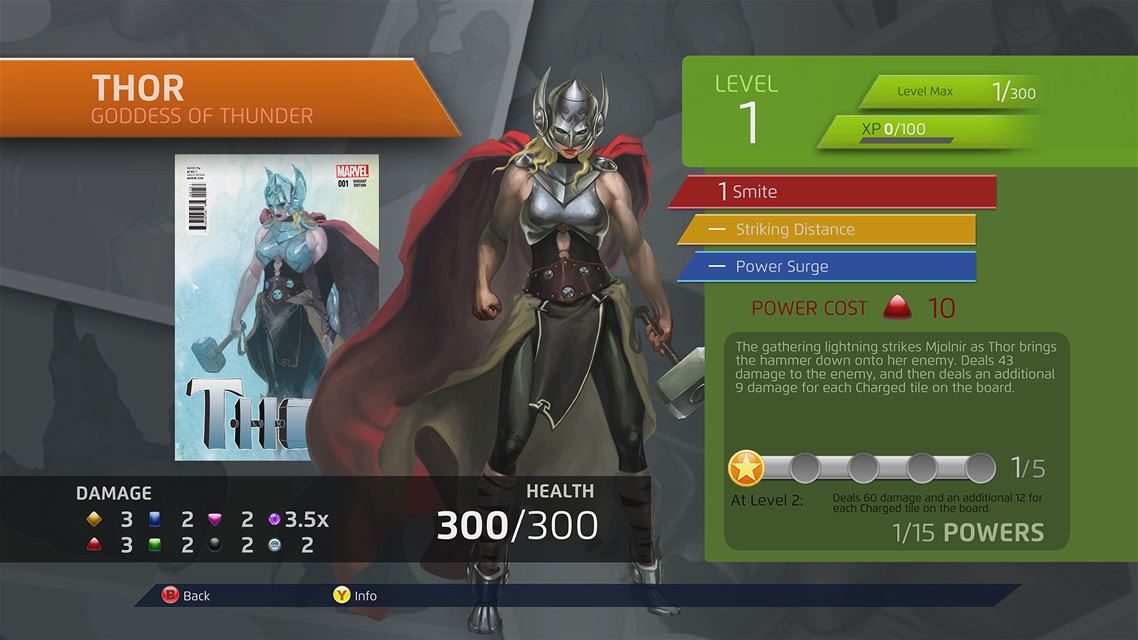 Upon beginning a level, you’ll be tasked with choosing three characters from an ever-expanding roster of Marvel’s finest heroes and villains. Starting off with just ten to choose from initially, completing story specific missions will bring new heroes to join your cause while your existing heroes will earn experience points along the way. This experience in turn translates to making attacks more powerful, increasing their health meter and eventually unlocking some new special abilities that can make or break the sway of the match.

The down side to this set up is that it becomes increasingly difficult to level up all characters evenly and soon you’ll be restricting yourself to using the same handful of characters for every battle. This becomes a nuisance when certain levels will require you to bring specific heroes into battle, and if they’re not up to scratch, then you’ll have to take some time to replay old levels in order to bring them up to speed. However, this is a rarity and given the enormously generous amount of characters on offer, you’ll soon be able to create a team to suit all occasions.

Surprisingly, the most difficult battles aren’t the ones where you’re facing off against Venom, Bullseye or Doctor Doom. Instead, facing off against Norman Osbourne’s henchman is a greater challenge. While these character cannot perform straight up jewel-swapping attacks like their super-powered allies, they instead can set-up planned attacks that will dole out critical damage if not contained within the time-limit. If you can’t neutralise the skull-marked jewel within a number of turns, then not only will they deal out a special attack but they’ll also destroy a cluster on the board and in turn create an overwhelming combo in the process. I’ve seen Spider-Man take down all of his nemesis’ only to fall at the trigger of a goon’s Tommy gun.

As well as doling out the damage, each jewel will give your team some action points to spend throughout the match. Each character comes equipped with a number of devastating special attacks that can quickly knock your opponents’ health down and even stun them altogether for a number of turns, giving you plenty of time to make some headway on the puzzle board. This mechanic along with the ability to level up characters turns what would normally be a run-of-the-mill puzzle game into a role-playing game of sorts, further distancing itself from the seemingly never-ending Bejeweled and Candy Crush style games of this world. It’s a lot of fun and only adds to the already additive nature of the game. 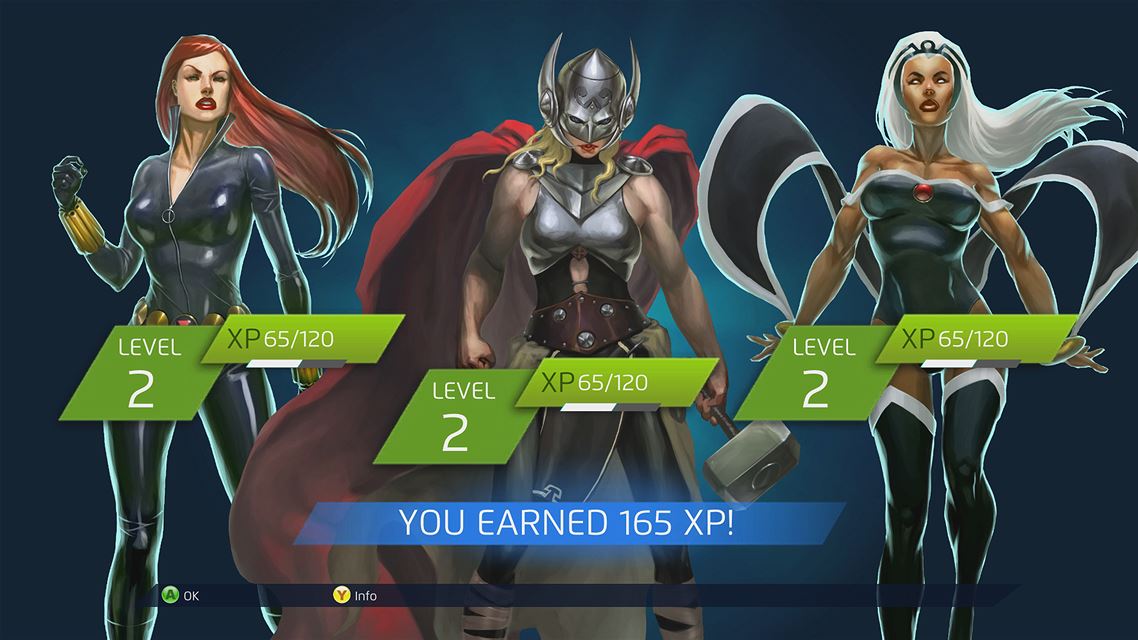 Seriously, this game is addictive. Levels can generally be completed within a few minutes and with so many quests and side-missions on offer, you can quite simply lose yourself in its simplistic nature. As a somewhat definitive version of the game, pretty much all of the story missions and characters from the free-to-play version are available here, and that includes a few bonus missions involving the Hulk and Deadpool, respectively. The story itself, narrated through lacklustre, dialogue driven cut-scenes, becomes secondary in your goal to unlock everything this game has to offer.

There’s also a multiplayer mode on offer which is basically a one-on-one match, where each player selects three characters each to take into battle. It can be difficult to nail down a game, but they are certainly much harder affair than the single-player campaign. Meticulously searching for the best combination on the board takes time and if you’re not careful, you can accidentally set-up an energy-shattering attack on behalf of your opponent. If you want my advice, make some headway in the campaign before even venturing online as it’s a different beast altogether.

Some may look upon this Marvel tie-in with some cynicism and it doesn’t offer much in the way of graphics, sound or story. Aside from the game board itself, there’s very little in the way of animation and each match contains the same music played on repeat, but if you’re heading into Marvel Puzzle Quest looking for style over substance, then you’ve logged on to the wrong game. Gameplay is king in this game and once you’ve made it through the opening few levels, you’ll find it very hard to turn it off.