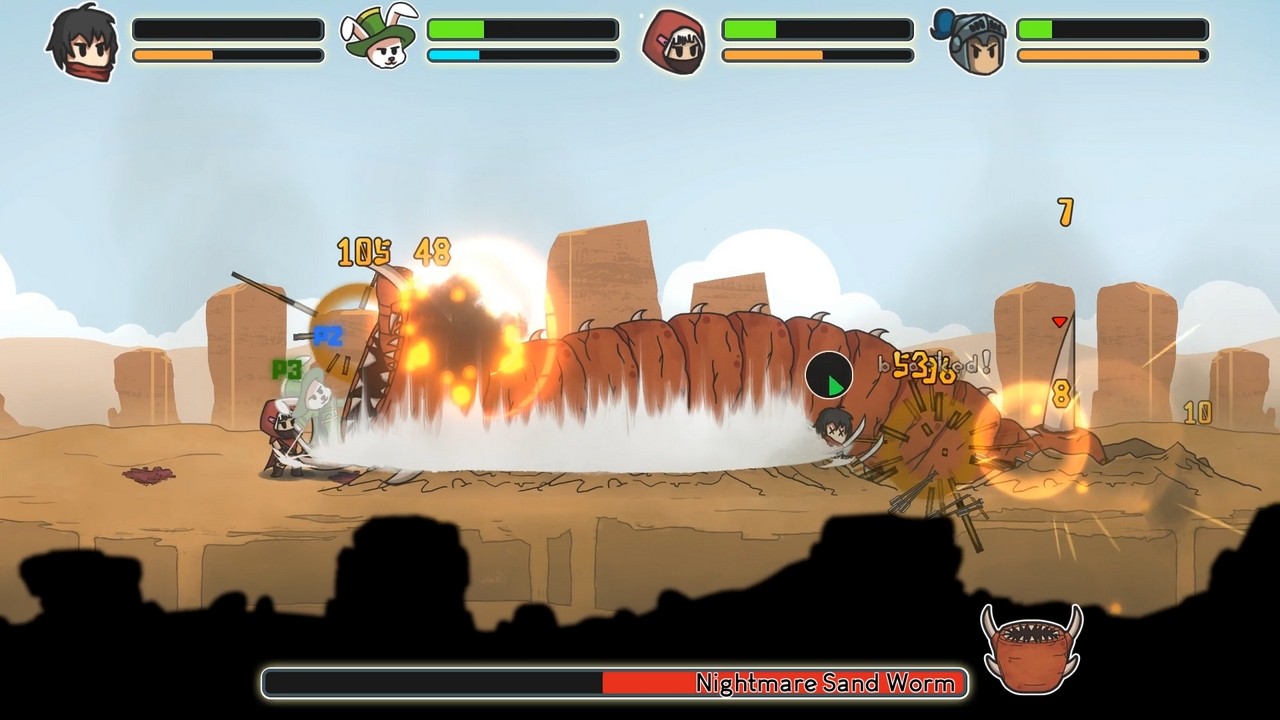 Boss battles are, generally speaking, a cumulative event that comes after a certain amount of effort or investment within the game. Boss battles are what many people look forward to in their gaming experience: you prepare for it, build up to it, and then either win by the skin of your teeth or laugh because you are hilariously overpowered for this boss. It’s how I always liked to take on Frankie in Earthbound, and I wouldn’t change a thing about it. However, it took MiSou Games’ new project, a cooperative sidescroller named Towertale, for me to realize something: I need something besides boss battles. I took a look back at some of my other reviews over the years, and, unless it was earth shattering, I very rarely mentioned anything about the boss battles. Which, unfortunately, means my time with Towertale was a bit dull and stale.

The setting is interesting enough, which is a point in this very cute and almost whimsical game’s favor. There’s this tower (naturally) called The Tower which was created aeons ago by ancient beings and imbued with a ton of power. Legend says that, if you can fight your way past all the guardians who inhabit The Tower and reach the top and gain the ultimate wish: the power to change your fate. Naturally, this has attracted the attention of many adventurers, but no one has reached the top in a hundred years, which actually isn’t bad when you consider the prize at the top. Anyways, as our story unfolds, four plucky adventurers, each with a very different story and goal, begin their ascent and find out what they must overcome in order to gain the true gift of The Tower.

If you’re exceptionally interested in doing the same tasks with different tools, Towertale can be a real treat for the right kind of player. To their credit, MiSou Games has done a fantastic job of crafting a different narrative and approach for each of the four characters. From the noble knight to the rabbit mage, the selections for moving forward with the game each come with their own storyline that’s, at the very least, interesting to take part in. You can see how an assassin named Dark Echo came to be, with a tragic but vague history that left him with amnesia and a drive to get to the top, relearn his past and shape his future. Or you can bear witness to the woman who was a slave, broke free, and now fights to combat injustice in her own way, and hopes the power of the Tower can end evil in the world once and for all. The storylines are all a bit on the nose, but still enjoyable and well crafted in terms of delivery. You can read the dialogues in natural states as the characters slowly progress, peppering in inner conversations mixed with encounters with NPCs who may or may not have their best interest at heart. 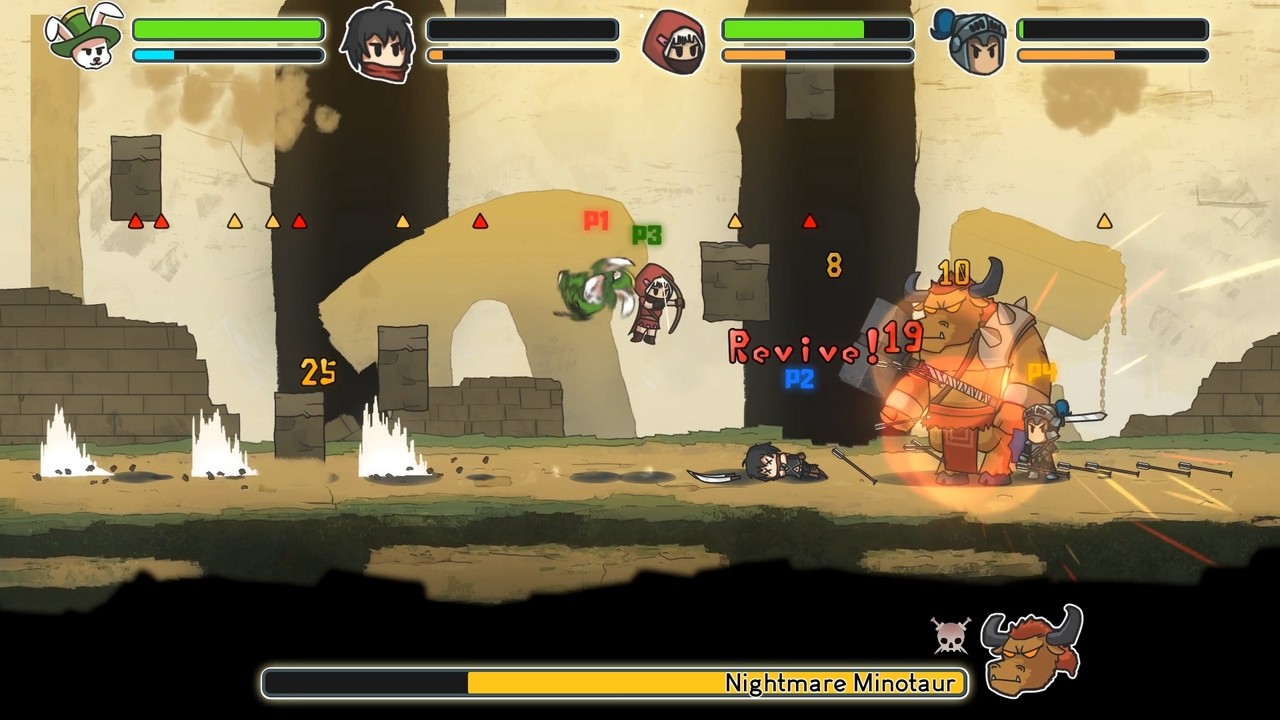 In that same way of the four unique storylines, the characters of Towertale also have unique approaches to combat that can help you decide what might be best for either your solo or group attempt. Lionel is all about close combat, though properly timed dashes can keep him from getting flattened in the process. Snicklefritz is the natural choice for ranged mages who don’t want to deal with enemies directly, but you can’t just hurl spells from a distance and think it’ll all be okay: mana runs out, and enemies run at you. Dark Echo seems to be the best balance of close and ranged combat for the person looking to do the game from a single perspective, which I guess makes sense since Dark Echo is the lone wolf of the characters anyways. You need to be aware, on point and open to change in order to make the game work from any character’s angle, but having versatility from the get-go certainly helps.

With Towertale, the name of the game is the boss fight. For each floor, you have a boss that you need to conquer in order to advance, and genuinely nothing else beyond that except story exposition that you might have a slight bit of walking control during to fool you into thinking there’s gameplay. 99% is the boss fight, and the boss will always have a minimum of two stages to consider. You can’t just run forward and mindlessly wail the attack button: you’ll get crushed and die before the boss is even at half health. Instead, you need to watch and learn about how the dance with a particular boss is going to move forward. For example, the giant wolf that you first fight against will give different tells before it either tries running at you or howling a frost beam in your general direction. Interestingly, a running wolf will hurt you no matter how you touch it, but a howling wolf’s only pain point is the frost itself: you can be right against the wolf and not suffer damage as long as the ice crystals don’t touch you. The rules about these attacks (and indeed the attacks themselves) can change as soon as the second stage begins, so don’t be lazy and think you’ve ever gotten the motions down after a single pass.

In fact, players who are dedicated to knowing the ins and outs of Towertale should absolutely take some time in the Arcade mode versus the Story mode. While Story mode is generally the better experience since it adds depth and meaning (plus allows you to see more artwork that you’d miss otherwise), Arcade mode cuts to the quick of it and acts as a staggered boss rush (compared to the actual boss rush which is relentless). You have a better chance to focus on the memorization of attack patterns and how the phases change, and it affords you a stronger opportunity to do a clean, complete run without wasting time and effort in simply indulging the cute but non-optimal storylines. Also, if you’ve got a friend or two to come and join in with you, this is the best way to enjoy the cooperative mode, since the Story mode gets really confusing if you’ve got multiple characters on the screen at the same time. The bosses do seem to scale based on how many people are participating, so keep that in mind if you think that things will be hilariously easy with your friend being the meat shield. 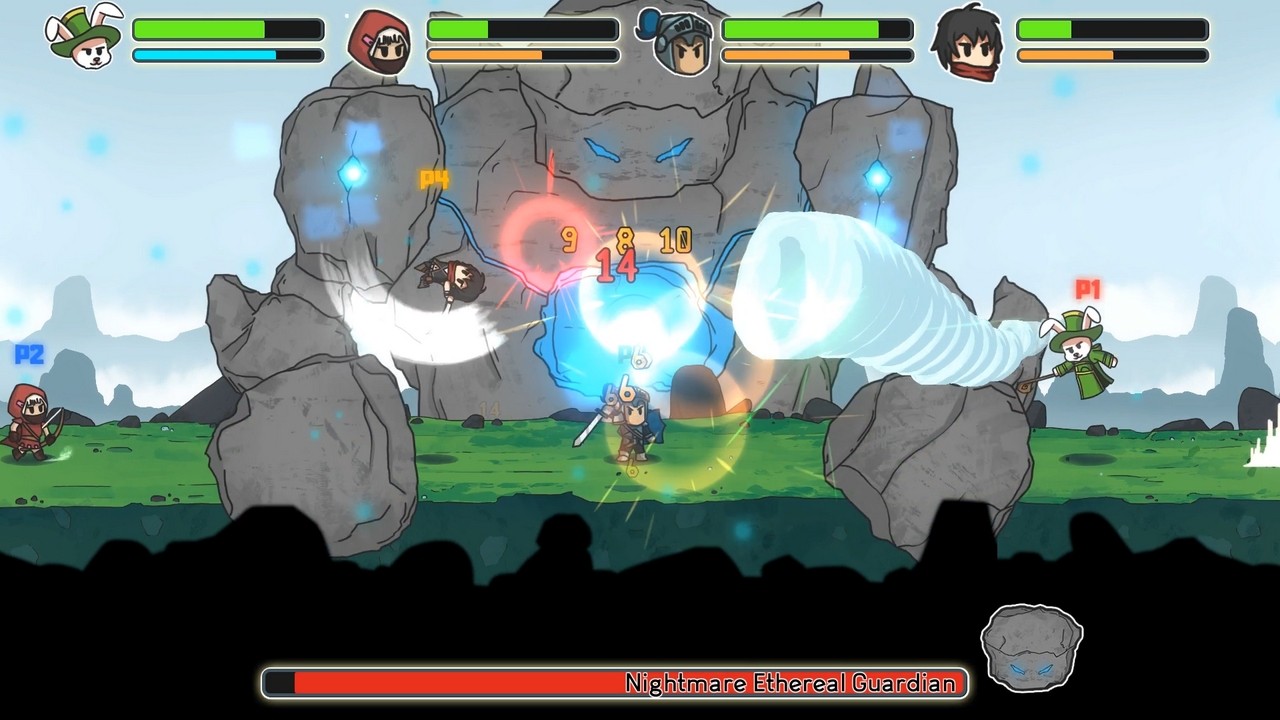 Unfortunately, I feel like Towertale comes in at a solid 70% in terms of delivery on all fronts. That is to say, there’s just something lacking to keep the game from clicking with me on a greater level. The stories are utilitarian and good framing devices, but there isn’t a single character’s tale that makes me compelled to keep playing as much as possible in a set amount of time. Since there’s no equipment or levelling, the grind has no compulsion, plus the bosses aren’t exactly randomized: you’re always going after the Boss Slime after the Wolf, and you can memorize the path up to a certain point and just go from there. The music is good, the artwork is cute, but neither is enough for me to consider them to be “must play” elements. There’s just an X factor that’s missing that keeps the whole package from being a prominent game on my homescreen. It just exists, and that’s maybe alright for some, but it’s not enough for me.

Towertale is a decent boss rusher, and there’ve been several advancements in the game over the development phase that seem to make it more appealing (multiple story endings are decent, and the inclusion of the co-op update plays well with the Switch’s ideology). If this is something that’s either eye catching to you or sounds interesting, give it a swing: the price is right, the devs are supportive and the community is clean and decent. For me, however, there’s just not enough waiting for me atop that tower to make me try to climb it one more time.

A boss rushing brawler that’s better with friends, Towertale is missing that certain fuel source to keep it burning longer than a few minutes at a time.